If the Sierra Nevada mountains are California’s spine, the Transverse Range is its bulging disc.

Tectonic pressure has squeezed this landscape against the grain — radiating east and west, defying the north-south orientation of the state’s mountains — creating a rocky front of steep slopes and broad valleys stretching from the western Mojave Desert to the Pacific Ocean.

The region connects California’s north to its south, providing a rare, undeveloped, east-west haven between the teeming population centers of the Los Angeles basin and the San Joaquin Valley.

Its topographic rarity is rivaled only by its diversity of animals and plants. Condors, mountain lions, salamanders, legless lizards and the endangered Bakersfield cactus are among the two dozen sensitive species that inhabit it.

This region is such a jumble of desert, snowy mountains and broad oak woodland — described as a “complicated mess” by one evolutionary biologist — that it has long tantalized ecologists.

Conservationists have for decades envisioned this region in the Tehachapi Mountains as a great crossroads: Preserve it, limit human uses and stitch it together with already protected land around it to allow wildlife to move freely once again, unimpeded.

Now that ideal, sometimes called “rewilding,” is well on its way to being realized. Last month The Nature Conservancy finalized the latest land purchase in the Frank and Joan Randall Preserve. 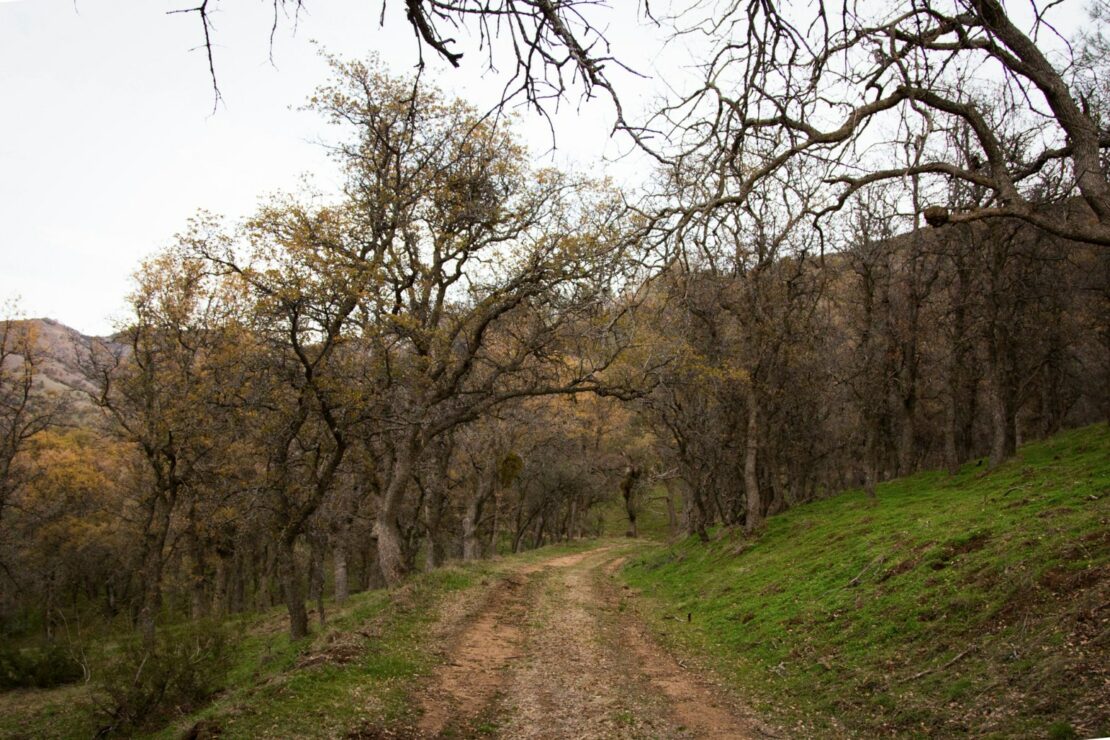 The 72,000-acre Randall Preserve is home to two dozen sensitive species of plants and wildlife. Photo by Julie Leopo for CalMatters

Buying 72,000 acres from various owners required what acquisition of real estate in Southern California always requires: lots and lots of money — in this case, more than $65 million, gathered over a decade. Included is about $15 million in state grants and partnerships.

The 112 square miles of land — an expanse a bit larger than the city of Sacramento — is less than two hours north of Los Angeles and about 30 miles east of Bakersfield. Its topography ranges from the low-lying desert to nearly 7,000 feet at the top of Bear Mountain. Its ecological value is maximized by its linkage to adjacent protected areas: the federal Carrizo Plain National Monument, Wind Wolves Preserve managed by the Wildlands Conservancy, and nearly a quarter-million acres of conservation easements in the privately-held Tejon Ranch.

This land is far from pristine. People have worked it for centuries and left their mark, and the tract will not be managed as a refuge: Livestock has grazed here for more than 150 years, and The Nature Conservancy says it will continue to allow ranching on about 90% of the preserve.

But the consolidation of protected land into an expansive preserve is what drew the Randalls to donate $50 million to the cause, preserving childhood memories of exploring California’s open spaces.

“When I was 10 years old, I used to drive up to Lake Tahoe with my father. We would go up through the Owens Valley and see Mount Whitney on the left side, go to Yosemite, and spend time fishing,” said Frank Randall, 91, a retired commercial real estate developer and philanthropist from Newport Beach. The couple also recently donated $50 million to buy and conserve Newport Beach’s ocean-view Banning Ranch as a public park.

“After World War II we resumed our trips and I began to see huge changes taking place. I thought, ‘That’s too bad that this is happening.’“

Conservationists see the region as a living laboratory for scientists: studying how climate change is driving blue oaks to move upslope to cooler areas and how genetically struggling mountain lions may benefit from more room to roam, for example.

“It’s a crazy admixture of stuff that makes it very diverse and unique,” said Brad Shaffer, director of the UCLA La Kretz Center for California Conservation Science. “From a biological point of view, that whole region has been known for a long time to harbor all of this very specialized diversity of salamanders and snakes.”

The Transverse Range contains sky islands, small peaks where certain species have been isolated and evolved over time with slight differences. Shaffer, who studies the rubber boa, said the small snake is an example of a species left out of the genetic mixing by its seclusion.

“Every one of those little peaks has a population of rubber boas that is not exchanging genes with other populations,”  he said. “It will be interesting to see what happens when things open up.”

Zach Principe, the Randall Preserve’s lead ecologist, said managers are not in a rush to formalize a plan: It will take three years to inventory the plants and animals and another year to outline how to manage them. Some problems are immediately apparent, manifesting in one of California’s most iconic trees. 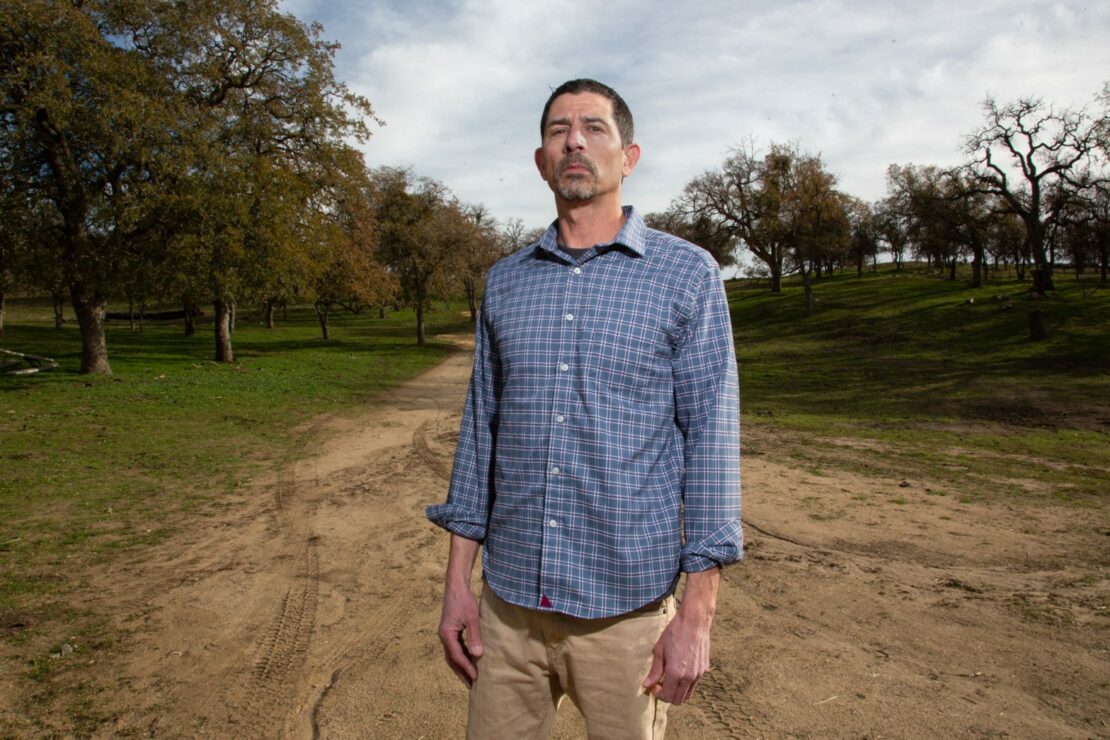 “Let’s think about what might transition here. What can we make it in this new climate?” asks Zach Principe, lead ecologist of The Nature Conservancy’s Randall Preserve in the Tehachapi Mountains. Photo by Julie Leopo for CalMatters

“That oak in front of us is two or three hundred years old,” he said, pointing to a drought-stressed blue oak in the south end of the preserve. “The climate when these trees were young was a lot different. It may be too warm and dry for blue oaks here.”

Future management may include replanting young oak trees in higher, cooler elevations and experimenting with scrub or grasses at lower parts of the preserve. “I want to find a balance. I don’t want to say ‘The blue oaks are done, let’s put in desert scrub.’ “ But he said that he won’t keep the land as it has been simply for the sake of history.

“Let’s hedge our bets, let’s think about what might transition here. What can make it in this new climate?”

The Randall Preserve bears the marks of human activity. The land is scarred from limestone mining and by remnants of a large-scale kiln, and it has nine working cattle ranches.

Livestock grazing can be a red flag in the West, where more than a century of overgrazing on public lands has done irreparable damage to vast ranges and water sources. The Nature Conservancy says it will continue to allow grazing at the Randall Preserve, but it will be managed as a tool to control weeds and wildfire.

Standing by a corral in a shallow valley on the Loop Ranch, Principe pointed to the rolling meadows that seemed to have weathered the state’s prolonged drought with no sign of fire. If not for cattle grazing down non-native plants, the picture might be quite different, he said. 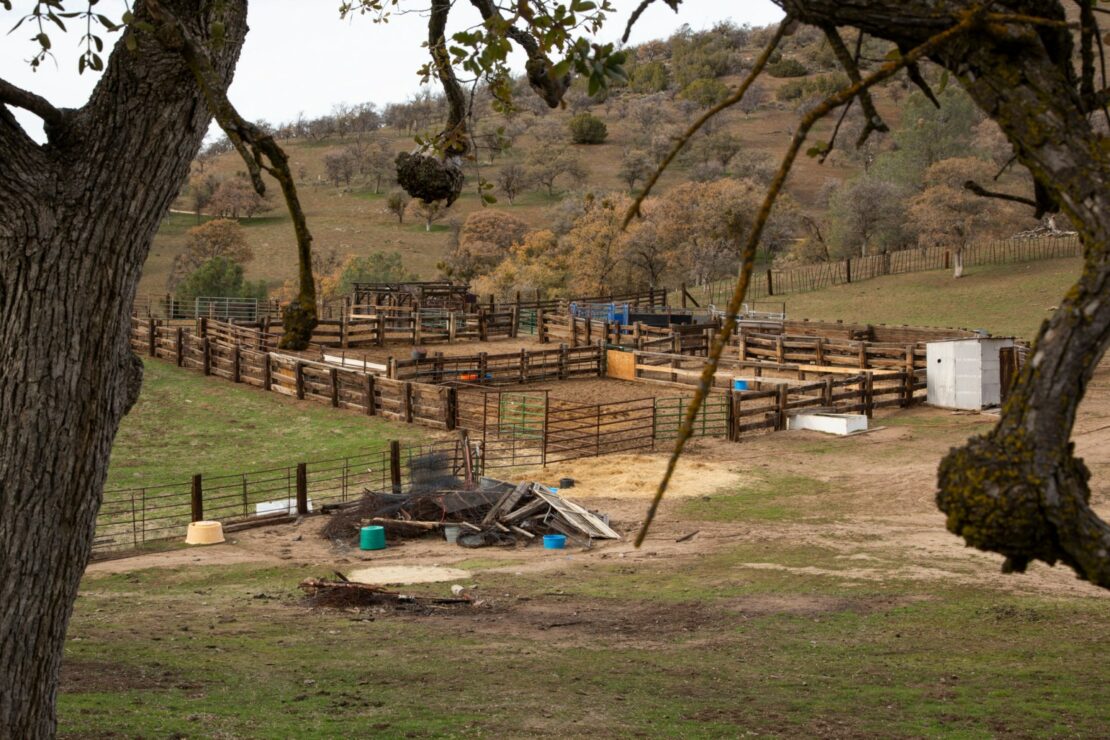 The Randalls’ donation helped purchase the 28,354-acre Loop Ranch in the Tehachapi Mountains. Cattle ranching will continue there as part of the preserve. Photo by Julie Leopo for CalMatters

Elsewhere extensive fences are installed along a shallow creek, intended to keep cattle from damaging the sensitive water source. On a recent day it was clear that livestock had been trampling through the area. Now that the ranch has been folded into the preserve, Principe said thoughtful livestock grazing will be in place.

Some studies show that grazing, carefully managed, can benefit natural systems. The Randall Preserve might yet be a laboratory to test that thesis.

Rachel Mason, who manages the preserve for The Nature Conservancy, called the strategy “active management,” an approach somewhere between fully restoring an ecosystem to a previous state and conserving it by leaving it alone. The Randall Preserve will be managed for climate resiliency, she said.

“For the most part in the conservation world we are doers, “she said. “We want to keep down invasive plants. If we don’t do anything, they could take over and be detrimental to the ecosystem.”

That means controlling non-native weeds by turning cattle loose on them. Livestock mows the plants and provides a critical fuels-reduction benefit.

“We are not interested in having wildfire completely take over our properties,”  Mason said. “You could argue that fire is a natural part of the landscape. But reducing the risk of catastrophic fire also benefits our neighbors.”

‘Not a whole lot is going to change quickly’

State Highway 58 bisects the preserve, interrupting natural migration corridors. The state Department of Transportation is working to determine where wildlife crossings over or under the highway may be sited. A final assessment is at least a year away, according to a department spokesman.

First, teams are compiling extensive inventories of plant and animal species present on the preserve. After that, a few years from now, a management plan will be devised, Mason said.

“The reality is not a whole lot is going to change very quickly, until we can take steps to see what’s working,” she said. 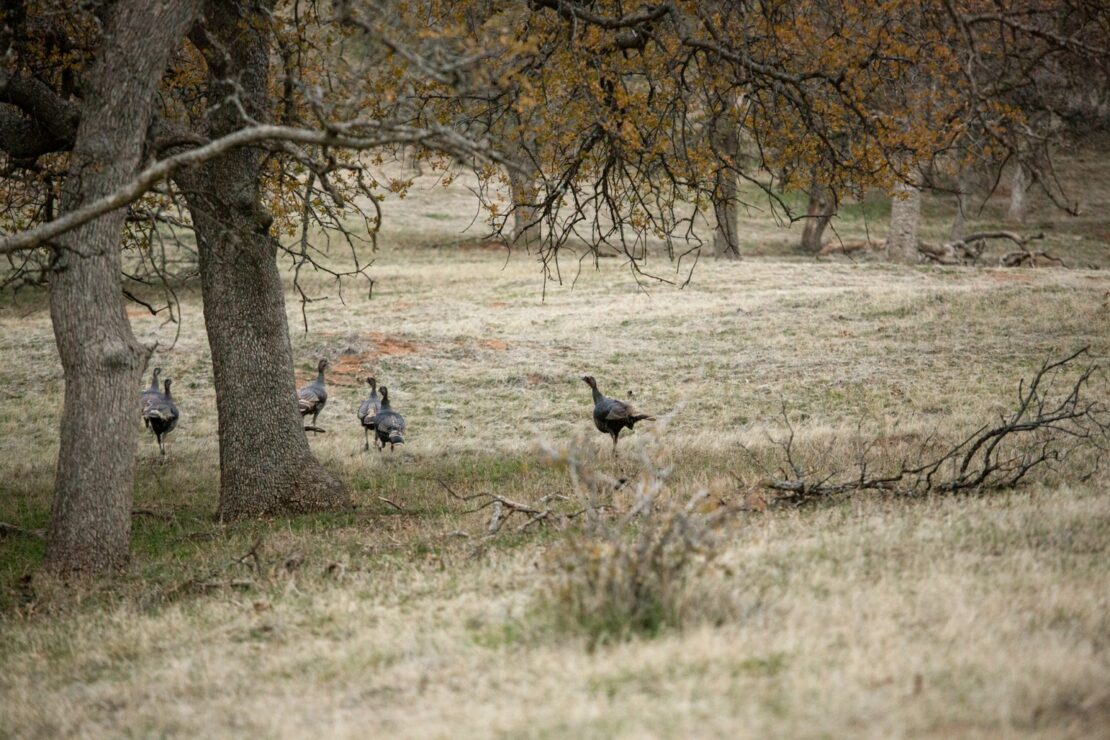 Wild turkeys roam on the Randall Preserve. Photo by Julie Leopo for CalMatters

Understanding what works takes time and no small amount of experimentation. Watching a bobcat scamper down a drainage after a squirrel, Principe ponders the distinction between restoration and enhancement.

The latter is a more realistic goal where invasive species have already left their mark. Bands of feral pigs roam the landscape, undermining hillsides with their rototiller-like rooting for tender bulbs, acorns, salamanders and lizards. While no game hunting will be allowed, Principe said hunters will thin the pig population.

There are no plans to allow hiking or other recreation at the Randall Preserve. Managers say there isn’t the staff or infrastructure to support it, although volunteer conservation opportunities are planned.

As dusk fell and fog rolled in from the Central Valley, cloaking canyons in a silver-blue haze, Principe said while the final plans for the preserve are years in the future, the most critical element was achieved: It’s been saved.