Two Long Beach City Council members want the city to explore the possibility of transforming a stretch of land along the San Gabriel River into an open space for pedestrians. But how much that would cost, who would pay for it and if it’s even possible have yet to be determined.

Council members Suzie Price and Stacy Mungo Flanigan, who represent two of the three East Long Beach council districts, are asking the city manager to look into the feasibility of the project. They both said they’re seeking a pedestrian walking path with minimal organic landscaping along a roughly 3-mile stretch of the San Gabriel River.

The potential project site could include former and active tree farms that line the western edge of the river, some of which are owned by the city of Los Angeles’ Department of Water and Power, Mungo Flanigan said.

There is already a bike path along the San Gabriel River. Mungo Flanigan said using the adjacent land for a pedestrian walking path is a good opportunity to make sure it doesn’t fall into disrepair and also provide a safer route for people on foot. 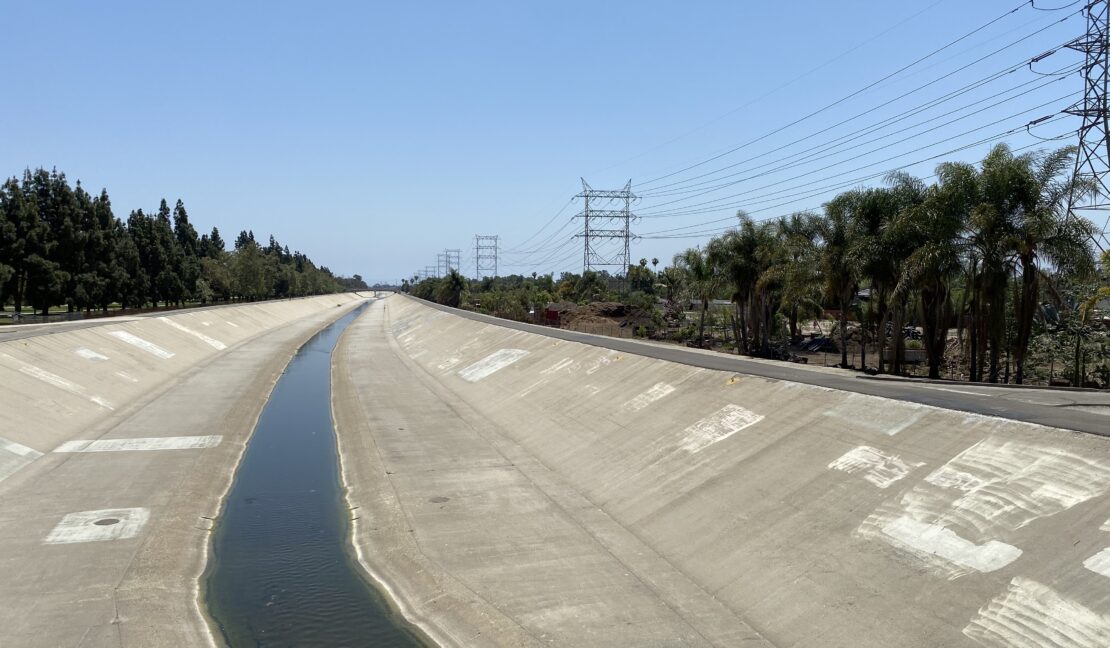 The bicycle path along the San Gabriel River and adjacent land two City Council members want to use for a pedestrian path. Photo by Jason Ruiz.

The request is very preliminary, the councilwoman said, and would require public outreach if the city finds that it’s a feasible project.

“It’s important to have an understanding of what’s possible to see if it’s something our community wants,” Mungo Flanigan said.

Price said the idea to create pedestrian space along the San Gabriel River was first brought to her attention by constituents after the city installed a path at the beach, which separated cyclists from runners and walkers who were previously forced to share the same area.

“There are lots of benefits of having a pedestrian access point,” Price said. “So many people don’t want to be on that path with riders. A lot of the people who are riding there are pretty experienced and they’re traveling really fast and in big groups.”

Councilman Daryl Supernaw, whose district also borders the river and could be included in this project, said if there was no fiscal impact on the city’s budget he would support it.

Price and Mungo Flanigan represent areas of the city that have some of the largest parks. There is nearly 16 times the park space on the east side of the city than on the west side, which also sits adjacent to the Port of Long Beach and the 710 Freeway.

Where the city creates more park space, and where park resources are deployed in Long Beach, have been contentious issues in recent years.

Last month, the City Council approved a storage facility along the Los Angeles River, which residents tried for months to block. The Riverpark Coalition community group sought a riverfront park space similar to the one proposed by Price and Mungo Flanigan.

A city report put out in April estimated the cost of developing the 11-acre parcel next to the approved storage facility could cost $27.5 million. The cost to purchase the land from Los Angeles County was not indicated in the report.

Mungo Flanigan said her and Price’s proposed project is different because it wouldn’t require the city to buy land, but instead rent it from the city of Los Angeles, which could cut down on costs significantly.

Neither of the councilwomen is proposing using city funds to pay for the project. Both Price and Mungo Flanigan are hoping that county and state funds can pay for any project if the city decides it’s something it can pursue.

“I would hope that state funds could be routed here because they’re focused on activation of more outdoor spaces,” Price said.

Gov. Gavin Newsom recently accounted a renewed push by the state to use an expansion of outdoor space to fight climate change.

“But if we explore everything and there are no funds then it will have to go on the back burner,” she said.