Its campuses are empty, but the Long Beach Unified School District is trying to make sure students’ bellies are still full.

After LBUSD schools shut down to slow the spread of COVID-19, Monday was the first day every campus had their doors open from 8 to 9 a.m. to serve a free breakfast to anyone aged 1-18, and again from 11:30 a.m. to 1 p.m. for lunch.

The morning hour was quiet at most schools, with a steadier trickle of students in the lunch hour. Because every school was open, there were no reports of large lines or crowds at any location, allowing those serving and receiving food to practice social distancing.

At Long Beach Poly, a school normally filled with 4,000 students and hundreds of staff during lunch, the campus was quiet. Principal Bill Salas stood outside the main campus gate on Atlantic Avenue, directing students to the cafeteria as they approached.

“I think it’s great that the district thought about the kids,” said Salas, who said there was an emotional struggle over closing the schools specifically because of how many students depend on school meal plans. About 50,000 LBUSD students qualify for free or reduced-price meals.

“What a great opportunity to serve the community,” he said. “Our motto at Poly is ‘Enter to Learn, Go Forth to Serve’ and this really fits in with that.” 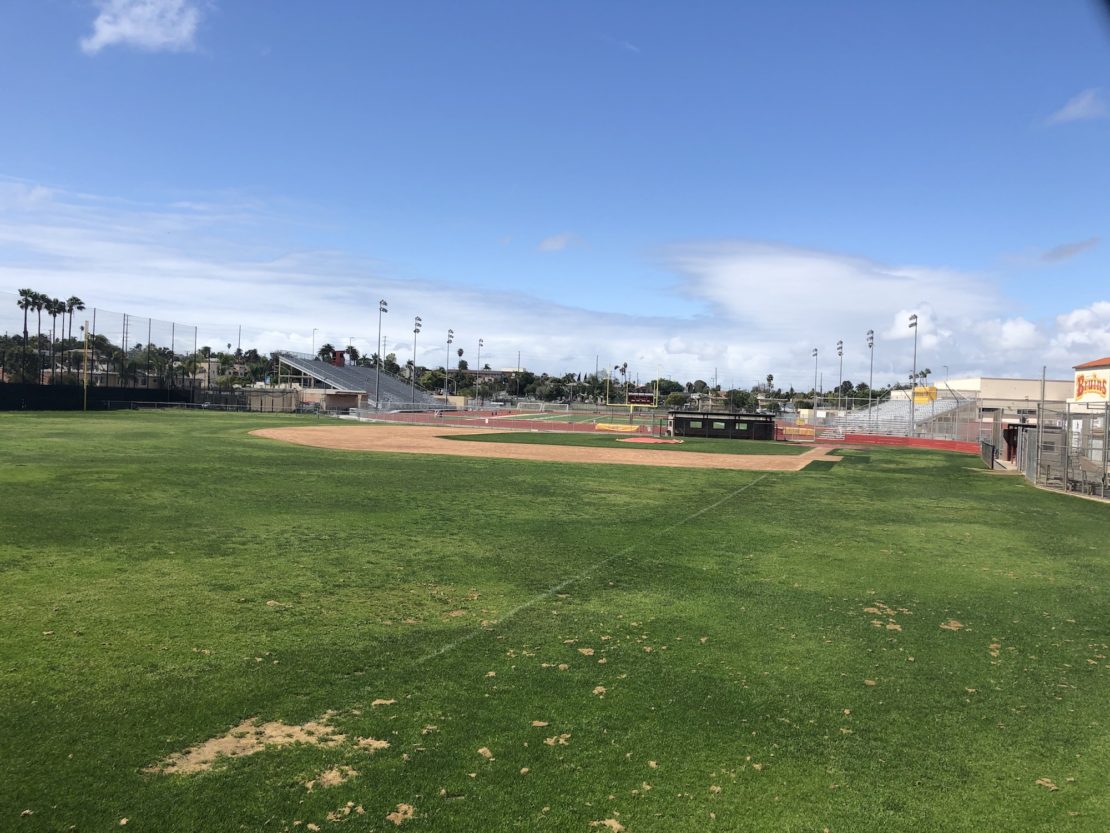 Many of the students that stopped by Poly were younger than high school–aged, including young children escorting their even-younger siblings. Salas said anyone who wanted a hot meal got one.

At Wilson High, assistant principal Lloyd Wilson said the school had seen about 30 students a half hour into the lunch period. Wilson was distributing coffee cakes with milk and juice in the morning and then hot lunches. Assistant principal Edward Steinhauser said the school’s cafeteria workers were prioritizing cooking food that wouldn’t keep over the closure. 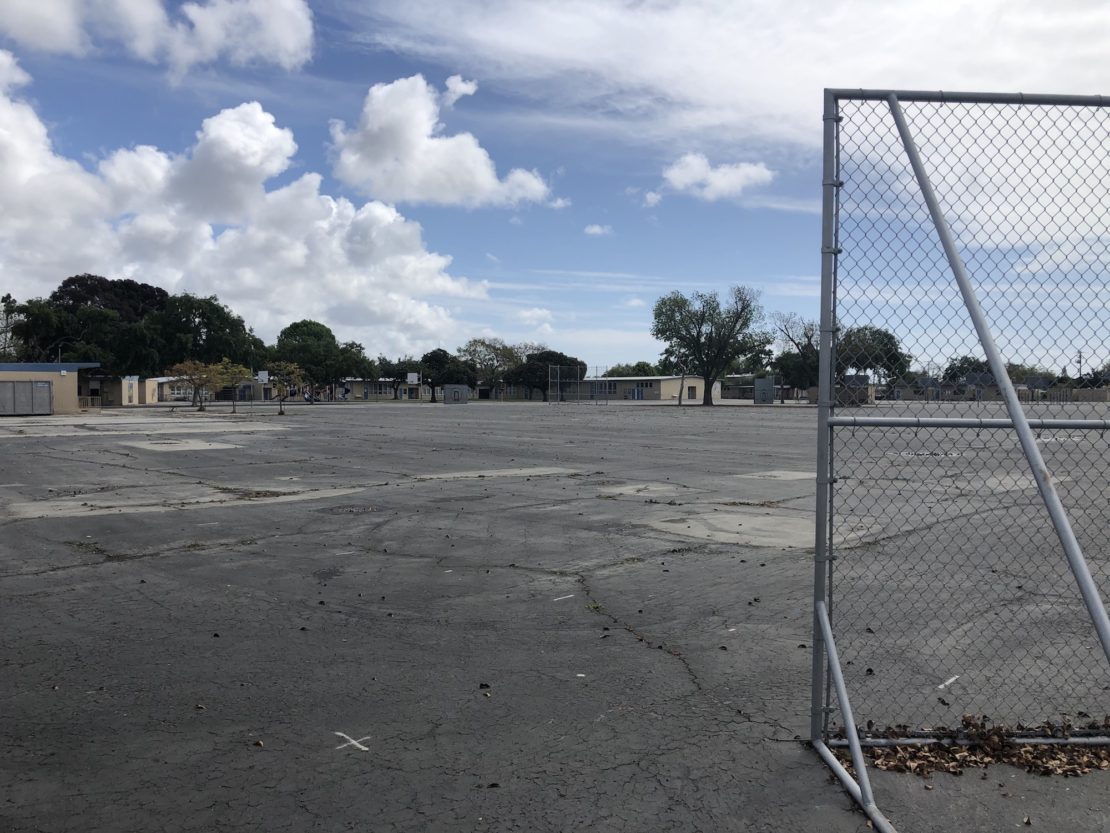 The blacktop at Prisk Elementary. Photo by Mike Guardabascio.

In East Long Beach, schools were seeing a steady stream as well. Prisk Elementary principal Beth Cohen said she’d had about 30 students stop by for lunch, including several high school–aged kids who brought their younger siblings.

“I think it’s a little less scary for the younger kids to come to a school like this instead of one of the big high schools,” she said. She added that while she had been doubtful of the number of students that might come by Prisk, she was happy to be stationed there.

“I think this is a really sad time for a lot of kids, and it brings some comfort to see some familiar faces,” she said. “For us and for them.” 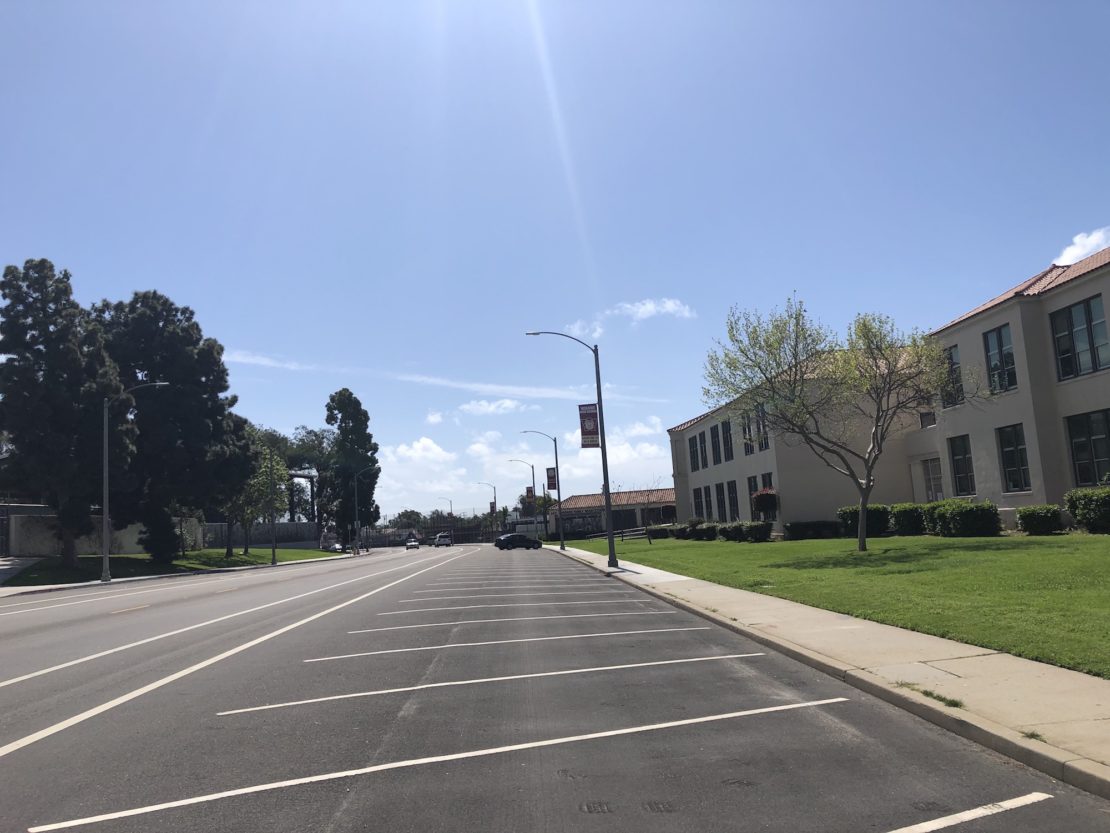 No cars in the Wilson parking. Photo by Mike Guardabascio.

The plan is to maintain the 8 to 9 a.m. and 11:30 a.m. to 1 p.m. hours at every campus this week (except CAMS on the CSU Dominguez Hills campus). Then, they’ll evaluate which sites to keep open and how to approach the remaining four weeks of closure.

In the meantime, school principals are watching over their empty campuses, where the bells continue to ring even with no classes in session.

If you need to get food from a local school, follow along with the district’s plans on their website.