A gunman fired at police officers responding to a call of a no-hit shooting at around 2 a.m. today near the Red Room bar on Fourth Street, according to police. No one was hit by gunfire, authorities said.

Officers en route to the scene were advised that bystanders were attempting to detain the gunman, police said in a statement. When the officers arrived at the scene, they attempted to contact the suspect, but he fled on foot, police said.

“As the suspect was fleeing, he fired his handgun toward the officers,” the statement said. “Officers lost sight of the suspect and established a perimeter.”

SWAT was called to the scene, and after about four hours the suspected shooter was detained inside a nearby apartment complex, the statement said.

Authorities had to use “moderate force” to detain the man after he failed to comply with orders to surrender, police said. Police said the man sustained a non-life-threatening injury to the upper body as a result of a police K-9. He was transported to a local hospital for treatment.

Police identified the gunman as Arturo Reyes Ortiz, 28, of Long Beach, adding he will be booked on suspicion of attempted murder once he is medically cleared.

A loaded firearm was located at the scene and will be processed by forensics officials. Police said the gunman fired at least one shot toward the officers before his firearm malfunctioned.

Police said they do not know a motive for the shooting, but said the gunman was possibly under the influence of alcohol or drugs at the time of the shooting and believe this was not a random act of violence.

Authorities said detectives are currently interviewing witnesses to determine if the suspect fired his weapon prior to officers’ arrival.

Anyone with information regarding this incident is urged to contact Long Beach Police Homicide Detectives Adrian Garcia and Sean Magee at 562-570-7244. Anyone wishing to remain anonymous may call 1-800-222-TIPS (8477), or text TIPLA plus your tip to 274637 (CRIMES), or visit www.lacrimestoppers.org. 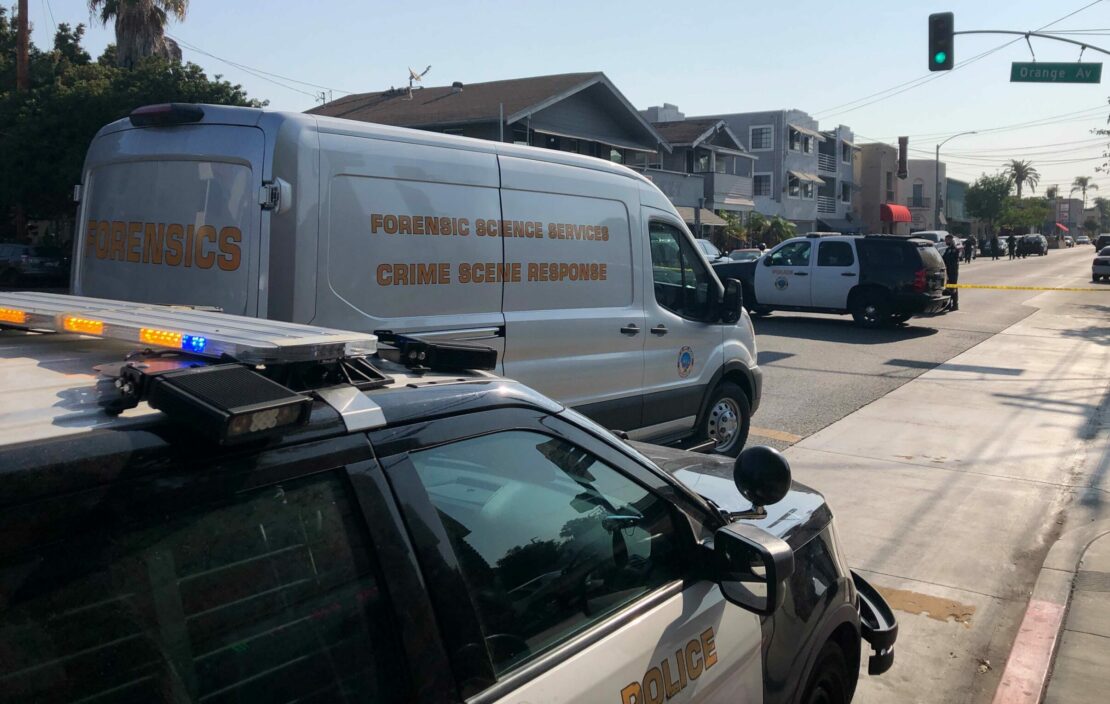 Forensics Services arrives at the scene of a no-hit shooting near the Red Room bar on Fourth Street, Thursday, Aug. 12, 2021. Photo by Brandon Richardson.