Soon, visitors at the Smithsonian’s Museum of Natural History in Washington, D.C., can walk out of Julia Child’s kitchen in a gallery devoted to food, and step into the new $22 million Molina Family Latino Gallery to discover the many ways that Latino communities have shaped the history of America.

The new gallery, which opens to the public on Saturday, June 18, is the culmination of four years of conceptualizing and creating the 4,500-foot space into a colorful and high-tech gallery capable of handling rotating exhibitions, multimedia activities and objects, as well as first-person narratives.

The gallery was made possible by a gift of $10 million from the five sons and daughters of Dr. C. David Molina as in a tribute to their father the founder of Molina HealthCare in Long Beach.

The siblings—Mario, Martha, Josephine, Janet and John—each chipped in $2 million to launch the drive to open the gallery. John, who is founder of Pacific6, which owns the Post, said the gift was meant to spur further donations. “The hope was people would think, well, the Molinas are donating money, so it must be a worthy project,” he said.

John, along with Mario, Martha and Josephine and their families will be in attendance earlier in the week to attend tours along with members of Congress, as well as a private reception on Thursday evening. 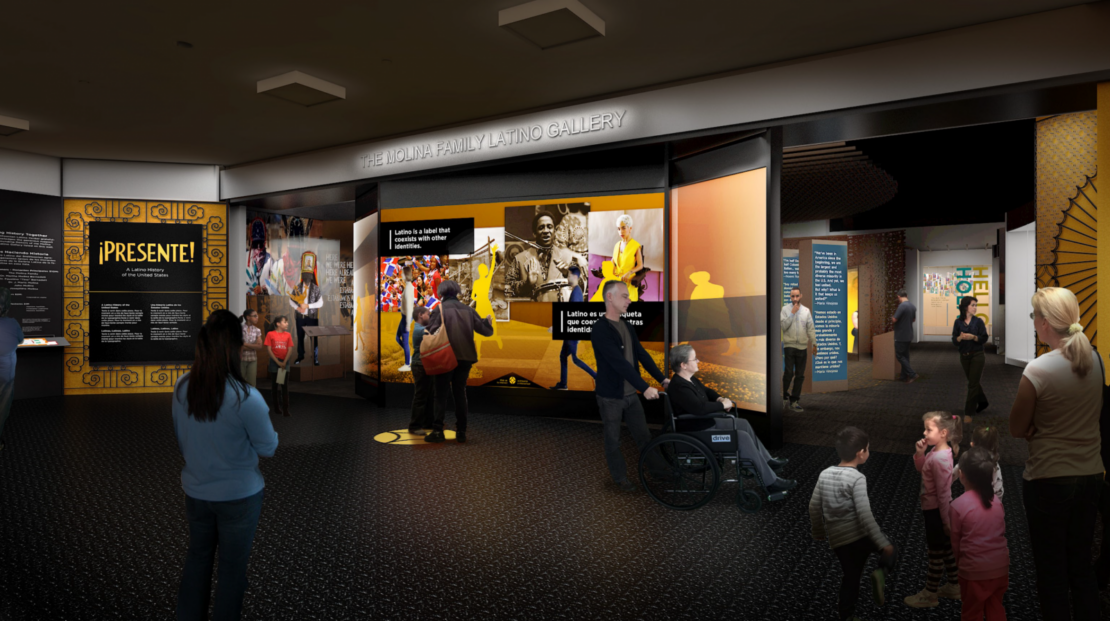 Artist’s rendering of the Molina Family Latino Gallery, courtesy of the Smithsonian.

The Molinas’ Latino heritage is a long one and includes, in more recent times, the work of the siblings’ great-grandfather José Maria Molina, of Sonora, Mexico, and their grandfather, Conrado Molina, of Yuma, Arizona, on the Colorado River.

“Yuma, at that time, was about half-Mexican, and people went freely between Yuma and Mexico,” said Mario. “My father grew up in Yuma, so he had an affinity for people who were struggling.”

Toward that end, he opened one clinic to serve the needs of those struggling people, then a few more. In 1980, C. David Molino founded Molina Healthcare to address the special needs of low-income patients.

Among the artifacts on display at the Molina Family Latino Gallery will be the siblings’ father’s black bag and stethoscope, said Mario.

The exhibits, said Mario, are geared toward accessibility for everyone, regardless of impairments, with designers partnering with the Institute for Human Centered Design to improve touch-screen interactive exhibits making them accessible by hearing and vision impaired visitors.

For more about the Molina Family Latino Gallery, click here.