Despite improving coronavirus conditions, it will be at least three weeks before Long Beach and Los Angeles County are able to reopen most parts of the economy, including indoor service at restaurants and houses of worship, according to a new system to guide the process that Gov. Gavin Newsom unveiled Friday.

Under the new system, schools would also remain closed for in-person instruction for the time being, though in some areas schools could apply for a waiver if certain criteria are met.

The new regulations will, however, allow indoor services for hair salons and barber shops to reopen with modifications—as long as the county signs off on that change. Long Beach Mayor Robert Garcia said in a press conference Friday afternoon that county health officials will likely make the decision next week if and how salons and barber shops could reopen for indoor services.

Indoor malls could also reopen, which would include the Lakewood mall, pending county approval.

Los Angeles County—along with 87% of the state’s population—falls into the highest risk category in the state’s new color-coded tier system to determine when businesses and other industries can reopen. The “purple” category, which indicates the most widespread prevalence of COVID-19, includes counties with more than 8% positivity rate among those who are tested, and no more than seven new daily positive cases per 100,000 residents.

Los Angeles County fails in one of those criteria, with a 5% positivity rate and about 13.1 new daily cases per 100,000 people, according to the latest numbers on the state’s site. While the state was using the 14-day average number of new cases, it is now using the seven-day average new daily case count. 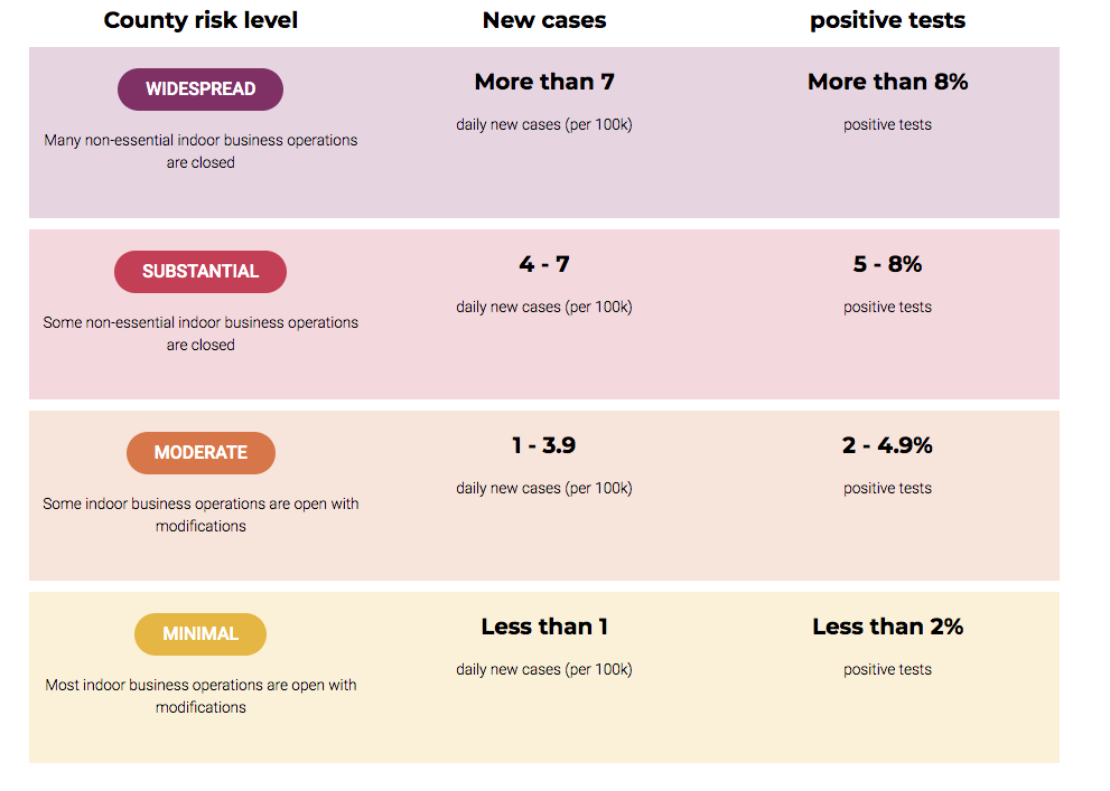 The state’s new tier system will dictate when counties can begin to reopen.

In order to move to the next tier, red, the city and county would have to meet the new state measurements for two straight weeks, and cannot loosen restrictions for 21 days. The red tier means that the county has only four to seven new daily cases per 100,000 residents and a 5-8% positivity rate. It would allow certain sectors to reopen or allow some indoor services: For restaurants, the red tier would allow them to reopen indoor dining at 25% capacity.

Guidance for specific sectors and activities for each county can be found on the state’s website. Most of the businesses remain under the same closure or modified opening orders: Bars with no food, tattoo parlors and piercing shops must remain closed, but outdoor services for religious meetings, restaurants and nail salons are allowed.

The changes come nearly two months after Newsom shut down bars, restaurants for indoor dining and a slew of other businesses following a surge in cases after the state’s first reopening attempt.

After being forced to close businesses for a second time, the state is “making sure that we really hold strongly to these buffers in terms of criteria and data, and holding that criteria and data in line for an extended period of time,” Newsom said.

“We’re going to be more stubborn this time and have a mandatory wait time between moves. We didn’t do that last time,” he added.

Newsom said that while the state won’t use ICU and hospital capacity as a measure for reopening, this is a simple measure to move within tiers. The new order still has an “emergency brake” built in should hospitalization and intensive care rates spike.

The halting step toward reopening comes as the state’s coronavirus data has improved in recent weeks. California’s monitoring list dictated which counties could begin opening schools by measuring six benchmarks, including cases, infection rates and hospitalizations. Although most of California’s 58 counties—including Los Angeles county—remain on the monitoring list, several have fallen off, including Orange and San Diego counties.

California has the most confirmed virus cases in the nation, with nearly 700,000, and the third-most deaths — 12,550. But since the closures last month, the average number of daily cases has been falling along with the infection rate and hospitalizations, which peaked at 7,170 on July 21 and since dropped to about 4,300.