SWAT officers used tear gas to end an hours-long standoff with a man who reportedly threatened people with a gun and then started a fire inside his apartment where he’d barricaded himself this morning, according to police.

The situation began around 2:40 a.m. when the 55-year-old man started smashing windows in the apartment where he lives on Cherry Avenue just north of Anaheim Street, the LBPD said.

Police then got calls saying the man was breaking other tenants’ windows, banging on their doors and threatening to shoot them, LBPD Administrator Karen Owens said.

When officers got there, the man wouldn’t come out of his apartment and they soon learned that some time over the last few days he’d fired a gun at someone, according to LBPD spokesman Brandon Fahey.

Trina Houston, who lives in the apartment building next door, says the man has lived at the complex for a few months and is a constant problem—always starting arguments, harassing people or asking female neighbors to come back to his apartment.

“This is the furthest I’ve seen him go,” she said. Usually it’s just an annoyance, she said, like when the man sat outside screaming “ugly” at every car that drove by.

This time, Houston said, “I guess he was just really messed up and started bashing in windows.” 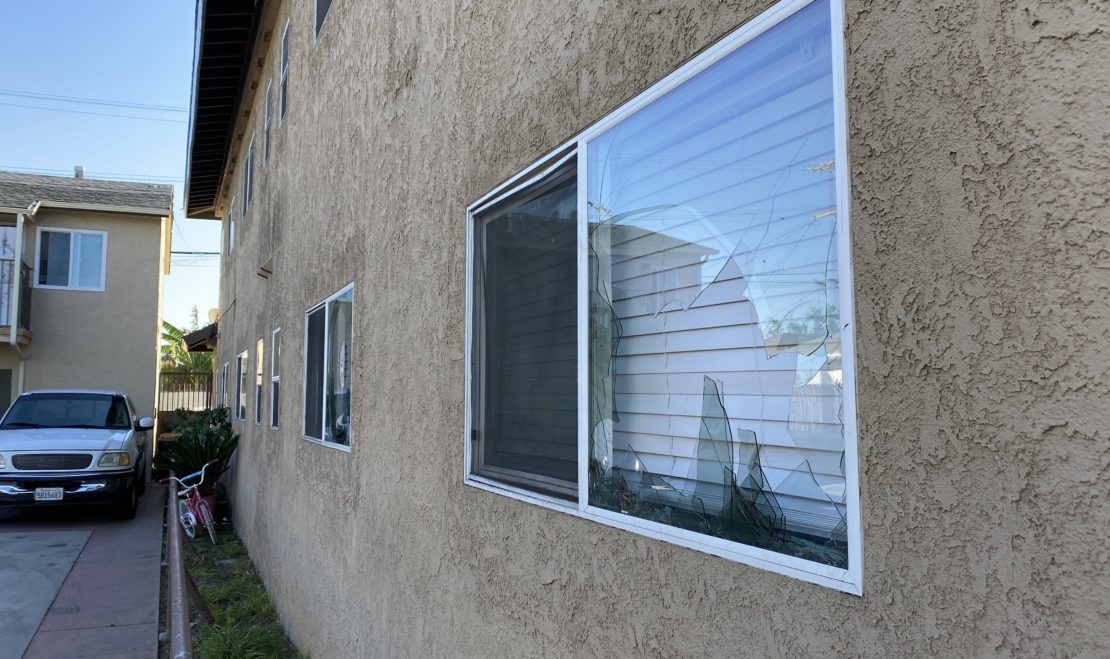 A smashed window at a Cambodia Town apartment building where police said a man was threatening neighbors and breaking glass. Photo by Jeremiah Dobruck.

When police arrived at the apartment building in the middle of the night, Houston and the other neighbors either evacuated or sheltered in their homes while officers set up a perimeter—worried the man was armed.

Police called in negotiators, but the man refused to surrender, Fahey said. Eventually, he started a fire in his apartment and police used tear gas to force him to come out, according to the department.

When he did come out, he still refused to comply, so officers used a K-9 to take him into custody around 8 a.m., Fahey said.

The man was taken to the hospital—as is standard any time police use a dog on a suspect. He’ll be booked into jail after he’s cleared of any medical issues, police said.

Police aren’t sure yet whether the man actually was armed. They were still processing the scene.

Regardless, Houston said she’s relieved to have a break from the man’s problem behavior.

“He does it every single day,” she said.

Editor’s note: This story was updated with more information from police and to clarify that the man reportedly threatened to shoot people.