One of the signs that welcomed visitors to Second Street in Belmont Shore is missing, but the cause is not theft. The sign, which was already riddled with termite damage, was struck by a car and has been taken down as a city commission works to approve a new design in the coming months.

The “Belmont Shore Welcomes You” at the west end of the Second Street corridor near Livingston Drive has been down for about a month, but some residents have just started to take notice.

Termites have slowly eaten away at the sign over the years, but a decision to take it down came after it was hit by a vehicle, said Matt Pederson, co-owner of Legends Sports Bar and chair of the Belmont Shore Parking and Business Improvement Area Advisory Commission.

“We had to wait for Public Works to tell us that they couldn’t prop it up again,” Pederson said Monday. “It was just too far gone.”

The commission has been working over the past year to approve a new design for two signs that will replace the old ones that sit at either end of the corridor. While the City Council established guidelines for city signage in 2015 that included preferred colors, fonts and templates, the Belmont Shore commission has forged ahead with its own process. 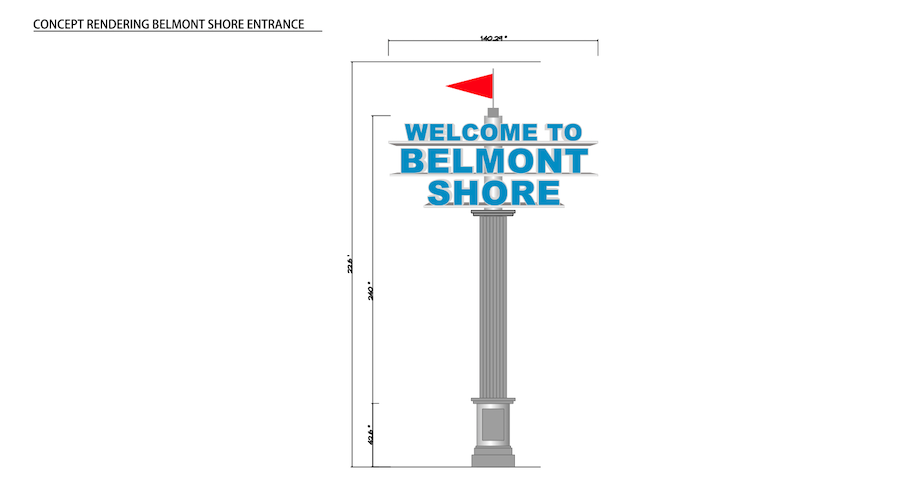 A rendering of the sign concept currently being considered by the Belmont Shore Parking and Business Improvement Area Advisory Commission.

Pederson said the city’s design templates “didn’t capture the essence of the neighborhood” so the commission voted unanimously to go in a different direction.

The design that’s been at the center of discussions for the commission features a red flag at the top of a post with blue lettering that reads “Welcome to Belmont Shore.” The lettering is expected to be lit up for visitors traveling into Belmont Shore from the east and the west.

Installing the new signs could cost about $40,000 each but a final price has yet to be determined as the commission finalizes its plans for the replacements. Peterson said that the commission would like to get the final design approved in the coming months and could look at a crowdfunding effort if the commission comes up short in funding.

The commission recently approved a 50-cent hourly increase for parking in Belmont Shore and the phasing out of most parklets across the city will free up additional parking spaces that could boost revenues. The projects the commission funds are exclusively paid for with parking revenue.