In 2006, longtime musician Barry Cogert applied for a grant to bring together youth to rehearse jazz music and play in a community performance. Gathering together 10 middle school musicians, Cogert and his band rehearsed over the course of eight weeks.

As the grant cycle came to a close, culminating with the performance, Cogert thought that was the end.

As he thanked the musicians for being a part of the program, one student asked, “When’s the next rehearsal?”

As others chimed in, Cogert looked toward his friend and co-director, Albert Alva.

“We just thought it was over,” said Cogert. “But Albert and I looked at each other and said, OK, let’s see what we could do.”

The next year, Cogert was able to receive nonprofit status, and The Jazz Angels was born.

The organization operates in quarterly, eight-week sessions, often with students returning again and again to following programs, said Cogert, who estimates that around 85% of students return for subsequent sessions.

The Jazz Angels also keep groups small, at eight to 10 students, allowing for each person to have an equal chance at improvisation, Cogert said.

“It’s really powerful when you eliminate all the stumbling blocks of learning music, and you just let the children experiment in class,” he said. “When the song goes from the beginning to the end and they sound great, it’s an overwhelming feeling.”

Cogert and the staff also take into consideration the demographics of their students, and incorporate music of their heritages, such as Afro Cuban jazz, or Latin jazz, he said.

During times of pandemic restrictions, when playing together was no longer possible, Cogert got creative, having each student record their individual part and submit it through a dropbox.

Cogert then aligned each individual’s recording together, putting together 154 videos in total for the students.

“That was probably where I saw the biggest economic divide,” Cogert said. “Looking back at it, in the midst of it, it was challenging, but people still learned, they still got it, and they were able to see other people and talk about music, so it still brought our music community together.” 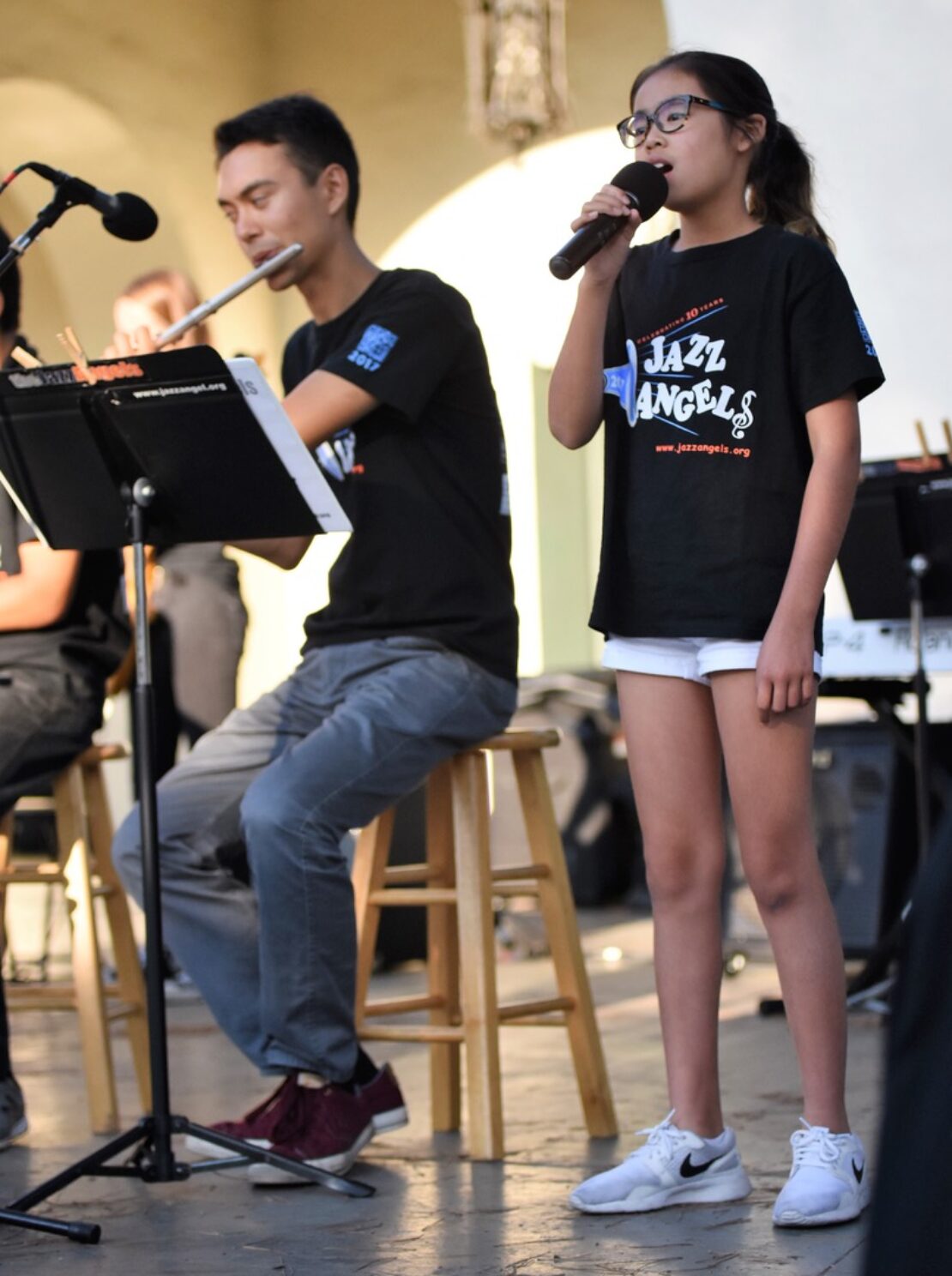 Cogert didn’t start playing an instrument until his senior year of high school.

“I was hanging out with a band and the bass player in the band went into the Navy,” said Cogert. “I had played bass one semester in elementary school, and one of the guys in the band said, yeah, let’s just go get a bass, I’ll show you how to play.”

As luck would have it, the band grew in popularity, and went on to be in several television shows and magazines, and toured theme parks across the country.

“I found it exciting to do,” he said. “Playing music is so healing when you’re going through things.”

After three years or so, Cogert decided to expand his understanding of music and attend Cal State Long Beach full-time.

“I was 24 years old and I could barely read music,” said Cogert.

But within a couple of years and with the help of friends, Cogert was up to speed, and soon found himself easily reading, and then arranging, his own music.

With The Jazz Angels, Cogert arranges music to align with his students’ abilities, so that they benefit the most from it, he explained.

For Cogert, who went on to work at Disneyland and in churches as a musician for many years, nothing compares to working with youth.

“When you’re playing for thousands of people, and I was pretty fortunate to be able to do that, that’s really exciting and invigorating and fun— But when you’re in a group of maybe 10 people and they’re young and they all get it and they all make music together and all the magic of the creativity happens, I found that to be more rewarding,” Cogert said.

He recalled teaching a class in Paramount one day with a song he wrote with Alva, that was meant to be instantly gratifying, meaning it can be learned in one class period.

One 11-year-old announced, “I love this song, I want to play it in my wedding,” Cogert said, laughing. “I thought that was so great.”

Another time, at a fundraiser, students were able to play with the late Barbara Morrison, an acclaimed jazz singer.

“This drummer was probably 13 years old at the time, and after he played a set with her singing, he said, ‘I don’t know how it happened, but it was like just her singing took the sticks right out of my hands, and I was just playing and I wasn’t thinking about it,’” said Cogert.

In the nearly 17 years since the organization began, over 2,000 children have participated, said Cogert, not including the students who kept returning.

The organization encourages mentorship between students, and has even hired a couple of former students.

“We want to get younger people started training and working and maybe coming up with some new ideas to keep the organization going after (Alva and I are) too old to do everything that we do,” said Cogert.

Throughout its years, the organization has balanced the difficulties of finding the right board of directors, and reaching new students, but Cogert believes that The Jazz Angels has hit its stride.

“We’re just about getting to a point to do some major expansion,” said Cogert. “I have a bigger staff now and I’m training them so I don’t have to teach all the classes, and we’re training them how to arrange music. This coming session, we’re doing things that we never did before.”

In addition to its regular programming, The Jazz Angels had made a movie in the history of jazz, and last year, distributed a book to schools about how to improvise.

This upcoming session, the organization plans to create a two-episode television-format show along the lines of Jimmy Kimmel combined with Mr. Rogers, discussing jazz in Long Beach and spotlighting musicians and The Jazz Angels staff.

Bringing fun and the magic of creating music together to students is the goal of The Jazz Angels, said Cogert.

He hopes that apart from learning how to play an instrument, that The Jazz Angels will instill teamwork skills, self-esteem, and confidence in its participants, that will carry them through the other aspects of their lives.

Whether or not his students go on to become professional musicians, or just enjoy it as a hobby, he hopes his students will realize that they can play music for the rest of their lives, said Cogert.

“They could play an instrument and they could play in a small group in their house, or at a coffee shop, and have a good time,” Cogert said. “And they can do that forever.”

The spring session of The Jazz Angels begins on April 24. For anyone interested in participating, or in volunteering, Cogert can be reached at [email protected]. The organization also accepts used instruments that will be repaired and distributed to students as well as financial donations, through the same email or here.