These students want LBUSD to go green, and they're keeping pressure on the school board • Long Beach Post News
- ADVERTISEMENT -

Students from across Long Beach have become a consistent presence at the biweekly Long Beach Unified Board of Education meetings, making their voices heard in support of the student-led Long Beach Green Schools Campaign. And their persistence may be yielding some results.

During the Oct. 20 school board meeting, half of the speakers during the public comment portion spoke about the campaign’s drive to convert all LBUSD campuses to clean technology. Many of the speakers pointed to the recent Orange County oil spill, which poured thousands of gallons of crude into the waters along Huntington Beach, as the latest reason to transition away from fossil fuels.

“As students, we are extremely frustrated. We are seeing our oceans rise and in my life, we will see that the city is quite literally flooded. At this point, 100 percent clean energy is a necessity,” Poly High student Rohan Reddy said as he addressed the five members of the school board. “We are doing our part, now it’s time for you to do yours. Please make this a priority. Make the safety of the students in your districts your focus. Please, join us in transitioning the LBUSD off of fossil fuels. The recent offshore oil spill should remind us that this is not a sustainable lifestyle and drastic change needs to come now.”

The Long Beach Green Schools Campaign has been pressuring the LBUSD to follow the other largest school districts in the state—like those in Los Angeles and San Diego—by committing to making all LBUSD campuses run on clean, renewable energy over the next two decades.

In 2019, the Los Angeles Unified School District passed its commitment to transition the school district off of fossil fuels by 2030 in the electricity sector and in all other energy sectors by 2040. That’s the proposal that’s been laid out by the Long Beach campaign as well, and the students outlined the potential benefits of making such a sweeping change to Long Beach’s campuses. 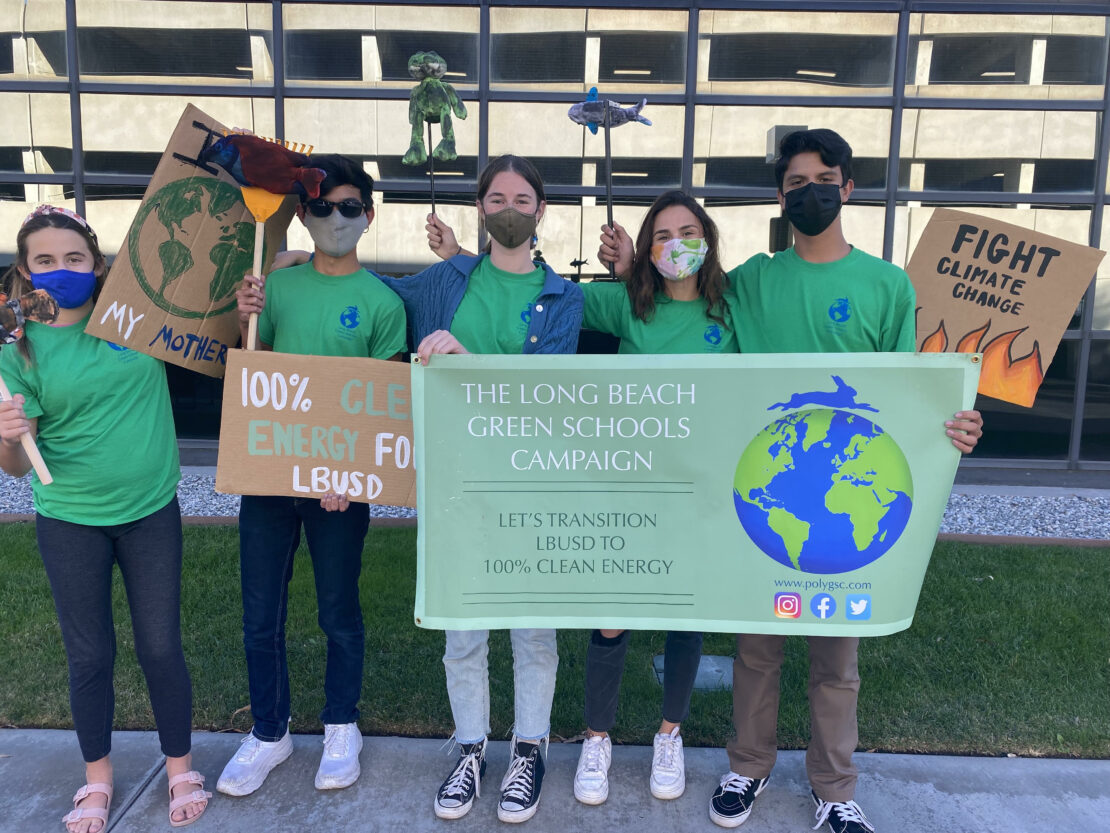 According to Long Beach Green Schools Campaign founder and current Poly High student, Diana Michaelson, the campaign has made some significant progress in gaining district support. The day after last week’s school board meeting, the campaign met once again with LBUSD facilities director Alan Reising, who gave some recommendations on ways to amend the proposal. According to Michaelson, Reising indicated that he would continue to assist the campaign in getting its resolution passed in the months ahead.

“That’s the big victory that we have, but we’re still going to continue to apply pressure attending the school board meetings,” Michaelson said.

Reising said the District is supportive of the campaign. “We are currently working with these students to ensure their voice is included in the District’s sustainability goals being developed as a component of our long range Facilities Master Plan,” he said in a statement.

According to Michaelson, Reising indicated there is still time for the Green Schools Campaign to get its proposal included in a 2022 update to the Facilities Master Plan.

“Mr. Reising said that if we could get our resolution passed in late winter or early spring, it would be passed right before the [Facilities] Master Plan, which would help line up with the sustainability goals that we hope will be included,” Michaelson said.

When it comes to getting the proposal passed by the school board, the Green Schools Campaign has a reason for optimism. They’ve already procured the support of school board member Megan Kerr, and fellow member Erik Miller offered his own endorsement during his closing remarks at last Wednesday’s board meeting.

“I just wanted to uplift the young men and young women who came into today’s meeting regarding our Green Schools Campaign,” said Miller. “I too was moved by the large oil spill that we had right here in our backyard. I was relieved that we have young people that are advocating for our environment to come in and continue to advocate for us to improve our fossil fuel use. So I just wanted to uplift them and their advocacy as they continue to support our earth.”

The next LBUSD school board meeting is scheduled for Wednesday, Nov. 3.