Unite the People, an organization dedicated to fighting for the incarcerated, began from within Ceasar McDowell’s prison cell at San Quentin State Prison.

After being sentenced to three life sentences for a non-violent crime, McDowell recognized the many men around him in similar situations.

Recognizing the lack of access to resources and opportunity that lead many to incarceration, McDowell knew he had to take action.

With the help of his brother, co-founder Mitchell McDowell, and a contraband cell phone, McDowell was able to create Unite the People’s first website, and gain nonprofit status.

Soon enough, the organization had its first clients.

“The first couple of guys that we helped get resentenced were guys that were living in my tier, in San Quentin State Prison,” said McDowell.

Both were older men, who had been sentenced to 30 years to life for stealing something small, said McDowell.

“To get them back into court —and they didn’t know it had anything to do with me— and to hear them talk about Unite the People . . . And to watch these two older gentlemen walk down the tier after being resentenced to go home and meet their families, that was huge,” said McDowell. “After that, I knew this was something that we really had to do.”

For those seeking legal assistance to petition for a resentencing, the cost can often range from $20,000 to $30,000, said McDowell.

“So guys end up stuck in there, and they can’t even fight if they were in the right,” he said.

At Unite the People, legal services are $3,500, and incarcerated people and their families receive direct support from those who have been in similar situations, said McDowell.

The nonprofit’s staff is comprised of people who were either formerly incarcerated or have incarcerated family members, and its attorneys must have a thorough understanding of the system, explained McDowell, who was released after serving 20 years.

“When dealing with these cases, it’s not a quick fix, it’s something that takes a long time to do,”  said McDowell. “So you have to be able to have that motivation to be like, hey, you know what, this guy, for every day that he may be sitting there that he didn’t have to, his family is out and it’s affecting them too, sons growing up with no fathers, and it affects more of the community than the average person thinks.”

Not only does the organization provide support to those who have been wrongfully sentenced, but Unite the People is working to change the policy behind it, supporting dozens of criminal justice reform bills in California.

When the pandemic first began, while McDowell was still incarcerated, rehabilitative programs that can contribute to reduced sentences were stalled, due to many prisons closing to employees that were not emergency staff, explained McDowell.

However, McDowell and Unite the People were able to successfully help get a proposal passed that would reduce sentences by five months to those who were a part of these programs, even though they had been paused.

“I wish we could have gotten more time off, but at that point, no one knew COVID was gonna be so long,” said McDowell. “But to me, that’s a great accomplishment, that’s at least 100,000 people that were affected just by us being there and advocating for them.”

Currently, Unite the People focuses on its #REUNITE campaign, an initiative to combat severe sentencing and end California’s use of gun and gang enhancements, that can add years to a sentence if a gun is involved in the crime. 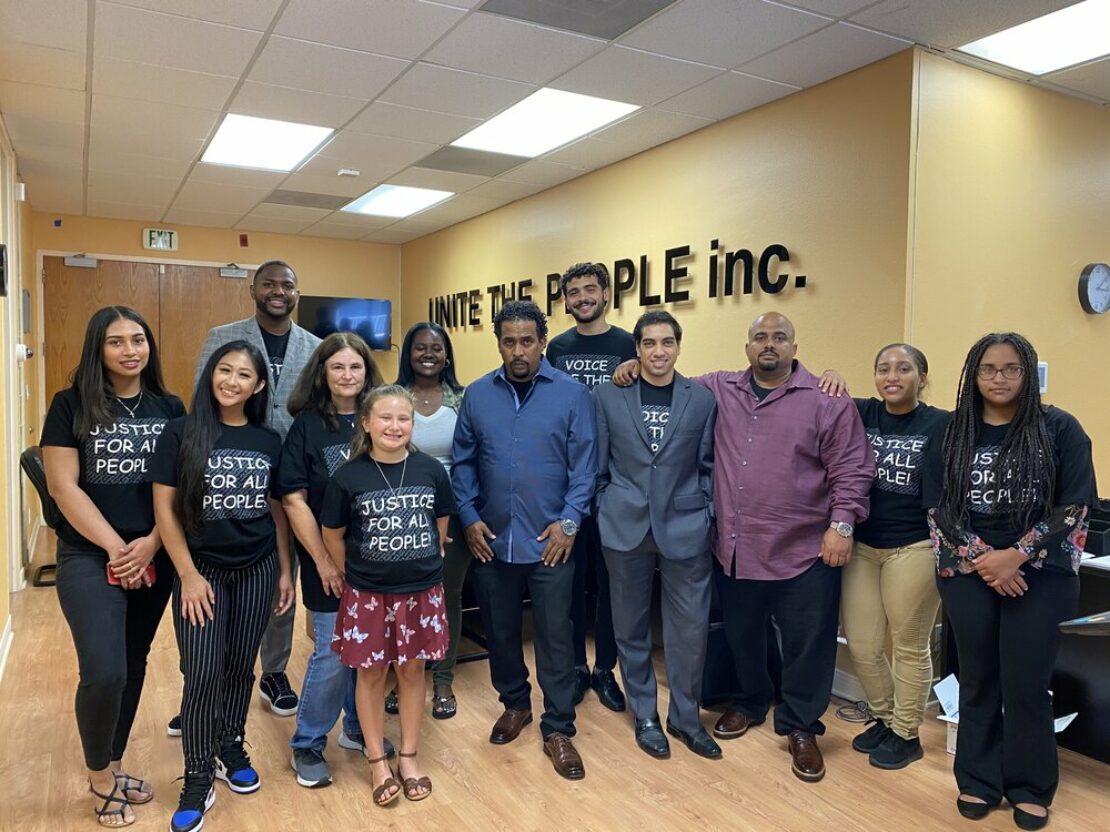 Ceasar McDowell, third from right, and the Unite the People team have supported dozens of criminal justice reform bills in California. Photo courtesy of Unite the People.

Apart from providing legal services and advocacy to those impacted by incarceration, Unite the People aims to work directly with the community as well, through city cleanups and providing supplies to people experiencing homelessness.

Next, McDowell hopes to reach people who may not believe better opportunities are available to them, with an upcoming Access to Opportunity tour.

“We want to get the young people in and get them in the right direction before they take that turn that puts them in prison,” said McDowell.

Targeting 13 to 30-year-olds, the tour will include successful community members from different career fields, with the intent of opening attendees’ eyes to new possibilities and demonstrating tangible pathways to success.

After beginning in Long Beach, he hopes to take the tour throughout California, while relaunching the organization’s radio show, that explains criminal justice laws and answers listeners’ questions.

Ultimately, McDowell hopes for the organization to expand its reach, advocating for even more people impacted by the criminal justice system.

“We want to have Unite the People in every state in the United States, that’s our goal, that’s the end game,” said McDowell. “We want to be able to help every community no matter what your problem is.”

Donate to Unite the People.