For nearly 17 years, Esthela Nevarez, 52, has built a life for herself selling botanas like chips, drinks and candies at the popular and historic Alpine Village Swap Meet near Torrance, where hundreds of vendors gather weekly to sell merchandise, clothing, tools and more.

For decades, the swap meet has been her lifeline, Nevarez said.

Now, uncertainty looms after vendors were given a two-week notice that the swap meet could permanently close at the end of the month.

“Nos agarraron de sorpresa,” she said: “They caught us by surprise.”

When she first began selling snacks at the swap meet in 2006, Nevarez, who lives in Lakewood, said she did not know of the profound impact the place would have on her. Not only does she depend on the money she makes there to pay her bills, her mortgage and her groceries, she says it’s become like a second home, and the people she has met have become her second family.

Following the deaths of her two sons in October 2021 and last January, the friends, colleagues and customers that she met at Alpine Village helped her through the grief.

“Todos conocían a mis hijos, así que ahora siento a mis niños allí también,” Nevarez said: “They all knew my sons, so now I feel my boys there too.”

As she nears the first anniversary of her young son’s death on Jan. 28, she said the pain she feels is hard to put into words, and this news has made it worse.

The sudden announcement came a little over a week ago, on Dec. 27, when Nevarez said she received multiple calls from confused colleagues who were told by Alpine Village staff that the swap meet would be closed from Jan. 16 through Jan. 31 and that it may not reopen again in February.

Alpine Village then reiterated the message last Thursday in a written notice to the hundreds of anxious vendors, but the letter offered no resolution or reasoning.

The German-style shopping center, located at 833 W. Torrance Blvd., is home to various shops, a deli, a bakery and the swap meet and was designated a historic landmark by the Los Angeles County Board of Supervisors in September 2020. The swap meet is open six days a week, Tuesday through Sunday, from 7 a.m. to 3 p.m.

“At the present time, we do not know if the swap meet will re-open February 1, 2023,” the announcement reads. 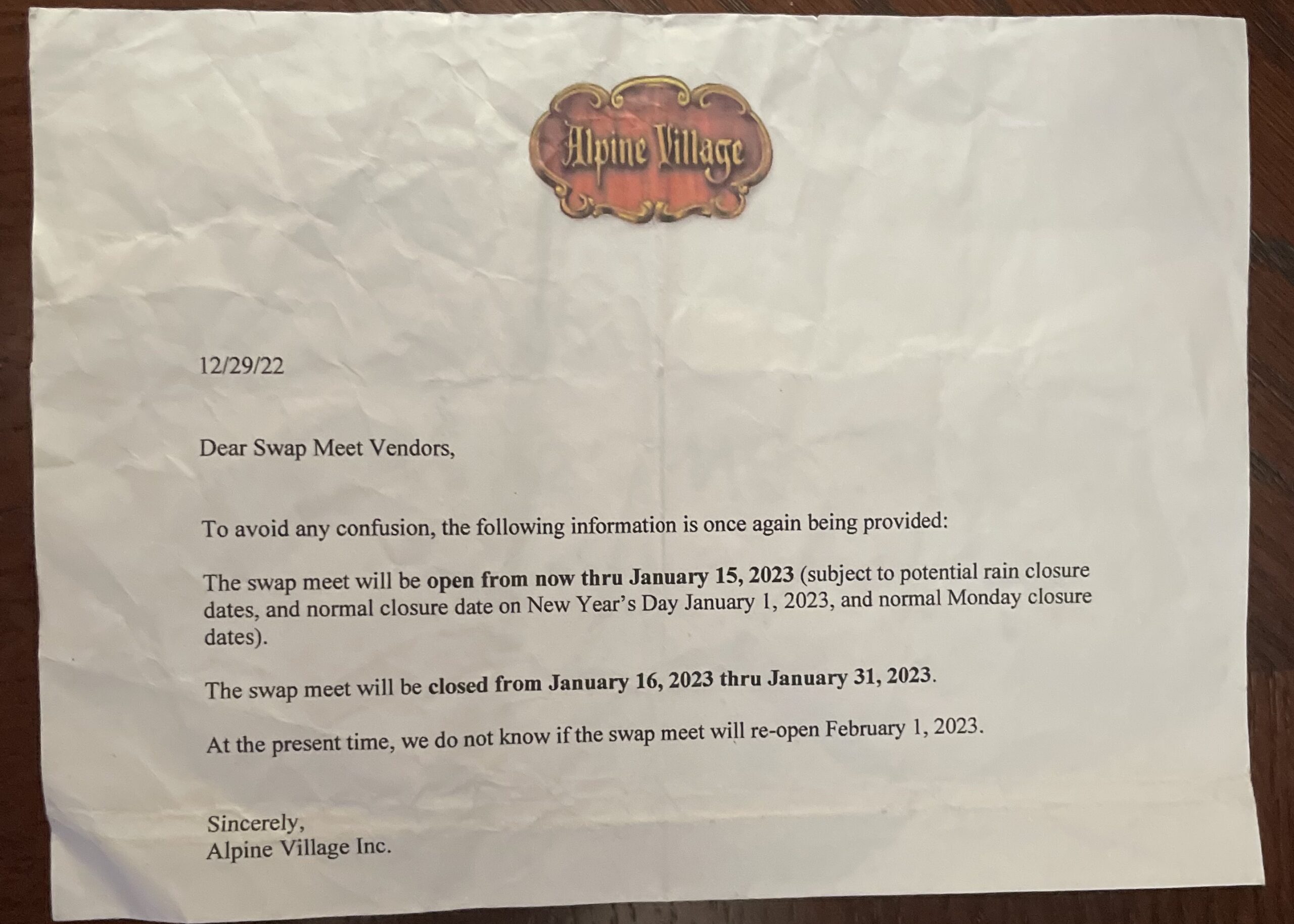 A photo of the written announcement given to vendors on Dec. 29 notifying them of the two-week closure. Courtesy photo.

Dozens of vendors staged a protest on Tuesday in front of Alpine Village in response to the closure, which they described as an unjust eviction and disrespectful lack of communication to those who have depended on the swap meet for years.

In an email correspondence obtained by the Post between concerned vendors and Alpine Village spokesperson Angie Klokkevold, Klokkevold told vendors on Dec. 31 that Alpine Village is a corporation that is operated by a board of directors and has the right to shut down the swap meet as it sees fit.

Klokkevold wrote that while it is unknown whether the swap meet will reopen on Feb. 1, vendors have no right to insist that they stay open, nor do they have the right to any information from Alpine Village regarding the reasoning for the closure.

Klokkevold ended the email stating, “…if any vendor presently wants to do their vending at another location, they are obviously entirely free to do so (as they have always been free to do so).”

Klokkevold and Alpine Village did not respond to questions sent by the Post on Tuesday night.

Simply moving to another location is not that simple, said Juana Lopez, 51, who lives in Bellflower and has been working at the swap meet every month since 2003.

When her husband lost his job last year, they began working at Alpine Village every Tuesday through Sunday selling general merchandise. In the winter, that means warm hats and gloves, and in the summer, sombreros—along with face masks, kitchen supplies and more.

The money she and her husband make is enough to pay rent, buy food for her kids and pay the bills, she said, and they’ve worked hard to build up their clientele for 20 years. “At other swap meets, there is no space for us.”

“De aquí, la verdad, yo no sé qué vamos a hacer. No quiero caer en depresión, no quiero llorar, quiero estar fuerte, confío en Dios y lo pongo en sus manos,” said Lopez: “From here, the truth is, I don’t know what we are going to do. I don’t want to fall into depression, I don’t want to cry, I want to be strong, I trust in God, and I put it in his hands.”

Lopez said she spent the majority of Tuesday calling lawyers and frantically searching for someone who could help them.

There are over 200 vendors estimated to work at the Alpine Village swap meet, many of whom have been there for over 35 years, according to Lopez.

“They (Alpine Village) are killing a vital vine that keeps us all alive,” Nevarez said.

At the protest Tuesday, vendors braved the cold and the rain and held up signs in Spanish that read “Queremos justicia!”, which means, “We want justice!” and “Respeto para los vendedores de Alpine!!!”, which means, “Respect for Alpine vendors!!!”

As they wait to hear back from Alpine Village officials, vendors said they will continue to fight and ask for the public to listen. With the help of community activist Alex Enamorado, the vendors have scheduled another protest to take place this Saturday, Jan. 7, at 11 a.m.

“Just because you work in a swap meet doesn’t mean you have no value. We are the ones who have the most value because we work with sweat on our foreheads.”