When the gates to California’s “island of romance” were all but locked to lovers and pretty much everybody else last month it may have saved the 4,000 residents from a coronavirus outbreak but it destroyed an economy based almost solely on tourism.

The stay-at home order instituted across California isolated tiny Santa Catalina Island from the virus that was spreading rapidly on the mainland. The ocean-front city of Avalon, whose picturesque beauty has sold millions of postcards over the years, has been turned into a ghost town.

The hotels are empty, the bars along the strand have shut down, almost all the restaurants are closed and the snorkelers, boaters, surfers, hikers and others who would be filling the island’s beaches and crystal-blue waters are nowhere to be found.

Cotter, whose husband has been furloughed from operating the tram that carries people to Catalina’s picturesque “Airport in the Sky,” said that although the peace and quiet has sometimes been pleasant most locals long for the days when people jammed the streets, crowded restaurants and made it difficult to find a place to pitch a towel on the beach.

“It’s very, very quiet here and we’re not used to that,” she said. “We’re used to being a noisy, touristy town.”

That was the vision of William Wrigley Jr., the chewing gum magnate who purchased Santa Catalina in 1919 and built many of its landmarks to draw visitors. He also owned the Chicago Cubs and used the island as the team’s spring training location.

Further popularized by the 1950s pop song “26 Miles,” a reference to Catalina’s location from the Southern California shoreline south of Los Angeles, the island draws more than a million tourists a year, according to the local Chamber of Commerce.

Cruise ships deposit as many as 2,000 people a week for brief stopovers while the Catalina Express ferries thousands more each day from mainland ports, including many who stay at hotels.

Now the Express is just down to a couple runs a day, mainly carrying islanders to the mainland for doctor appointments or other essential trips while bringing a few utility workers over to keep things running.

In the weeks that the city’s normally bustling Avalon port has been closed, Mayor Ann Marshall estimates the harbor alone has lost nearly $2 million in business.

“We are seriously looking for some of this bailout money to help us,” she said.

Meanwhile, many people say they are getting antsy to return to work at the bait and tackle stores, surf shops, kayak-rental places and other businesses that ferry people around the island on glass-bottom boats or trams, allowing them to watch the buffalo roam the island’s back country or the deer and the dolphins play. And not just because they want to start making money again.

“At this point, we really do miss all of our visitors,” said Megan Wright, owner of the Cafe Metropole near the beach.

“We’re used to seeing the same people every year,” she added, noting that during her 10 years on the island many of them have become friends as well.

Cafe Metropole is one of a handful of island restaurants still open for takeout and recently Wright has kept busy providing three meals a day to a group of Southern California Edison workers on the island temporarily.

“That’s been very exciting for us,” she said of the opportunity to help people stuck away from home with nowhere to go to eat before or after work. For safety sake, each set of meals is left just outside the lobby of a nearby hotel where the workers are staying, then carried inside by a security guard. 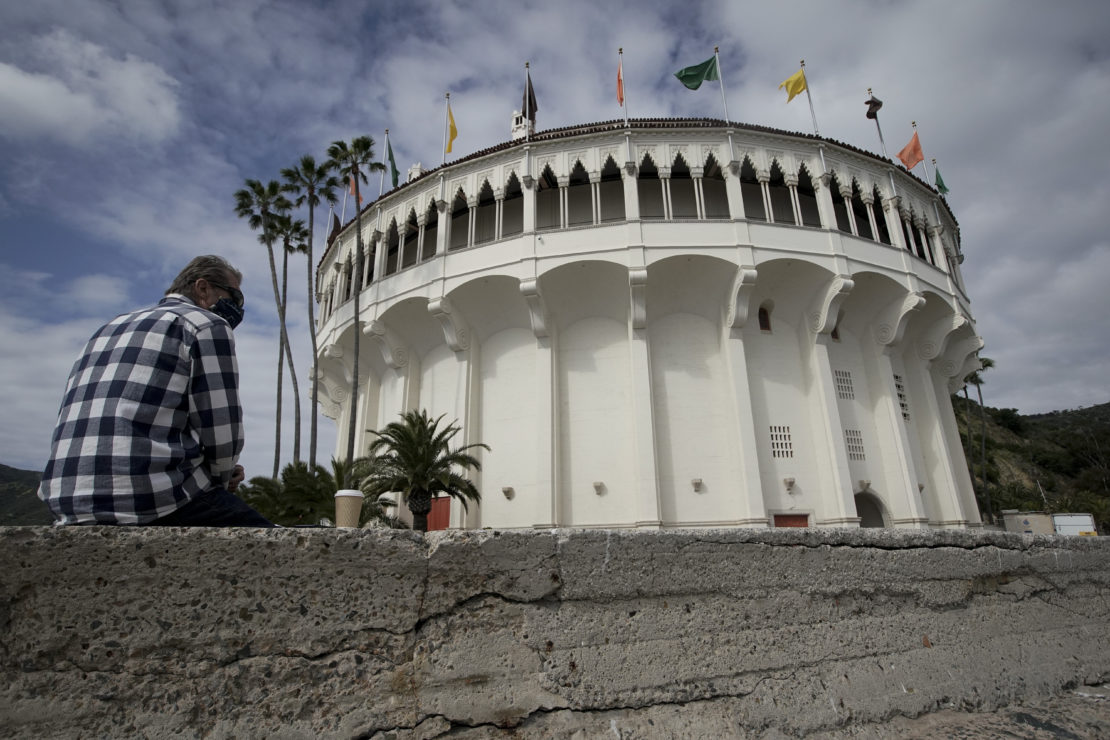 A man drinks a cup of coffee near the Casino on Catalina Island in Avalon, Calif, Saturday, April 18, 2020, In the weeks that the city’s normally bustling Two Harbors port has been closed due to the COVID-19 outbreak, Mayor Ann Marshall estimates the harbor alone has lost nearly $2 million in business. (AP Photo/Chris Carlson)

Avalon is part of Los Angeles County, which has a disproportionately high percentage of California’s overall confirmed cases and deaths. The island’s residents have been encouraged to stay home to avoid exposure on the mainland and so far just two have tested positive. Both are said to be recovering at home.

Most people with COVID-19 experience symptoms such as fever and cough for up to three weeks. Older adults and people with existing health problems can face severe illness, including pneumonia, and death.

Despite the devastating economic hit, Marshall and other officials say they don’t want to open the island too soon and risk a spike in infections. Overall, residents say pretty much everyone seems to be following the orders, wearing masks in public, social distancing and staying inside.

In a town this size, people say, everybody knows everybody else, even with a mask on.

There are daily trips to the post office to pick up mail, visits to the pharmacy and runs to the only grocery store, which for the most part remains well-stocked.

“People can’t drive in from their neighboring town for our toilet paper. So that’s been one positive,” laughed Jim Luttjohann, president of the island’s Chamber of Commerce and Visitors Bureau.

With more people cooking at home, flour sometimes has been hard to find. Chet’s Hardware has also had trouble keeping hand sanitizer on the shelves, so Cinde MacGugan-Cassidy, who owns the business with her husband, has taken to making her own.

With so much time on their hands, residents and business owners have made Chet’s a busy place as they drop in for supplies for fix-it-up and home-repair projects they never had time for before.

But other businesses MacGugan-Cassidy and her husband own, including a hotel and camping company, have been hard hit and some employees furloughed.

“For my husband and I, that’s probably the single most difficult thing to stomach at this point,” said MacGugan-Cassidy, who is also Avalon’s mayor pro-tem. She’s promised every furloughed employee they will have a job when the pandemic passes.

Until then, Marshall said, residents are helping each other however they can. The local food pantry, which normally delivers to about 15 families a day, delivered to 152 one day last week.

“All in all, people are saying this will pass,” Marshall mused. “We really consider ourselves as a family here and our family will get through this.”

—By John Rogers and Chris Carlson of the Associated Press.