With pressure mounting from residents fed up with fireworks detonating daily in neighborhoods across Long Beach, the city prosecutor’s office announced Monday that it had created an online fireworks complaint portal to help with enforcement.

City Prosecutor Doug Haubert said his office has already begun to send out letters to addresses that have been reported for illegal fireworks use to make them aware that continued use could result in criminal charges.

The public portal was created to not only accept new complaints, but to allow residents to upload video evidence that can assist law enforcement and his office follow up on them.

“In general, I love photo and videos because it shows the jury what happened during an incident and it can be very helpful and meaningful,” Haubert said Tuesday.

While he’s unsure of how many letters have already been sent out to addresses that have been reported for fireworks use Haubert intends to publish an update with those figures by the end of the week.

Haubert said its an innovative tool that the city has that can hopefully slow down the fireworks barrage by getting landlords to communicate the fireworks ban to tenants.

That code carries the same level of fines as the city’s current fireworks ordinance. 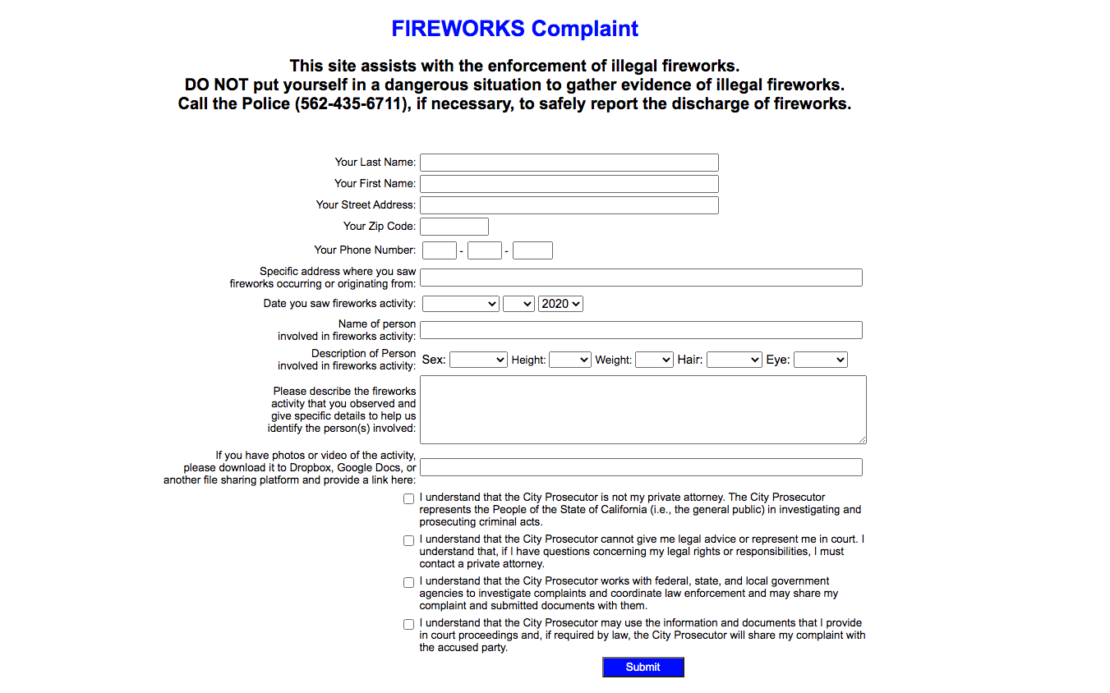 A screenshot of the complaint form from the city prosecutor’s new fireworks complaint portal.

The portal exists on Haubert’s city prosecutor website and allows users to submit information like the time, place, description of the person setting off the fireworks as well as what kind of fireworks were being set off.

Long Beach’s fine for illegal fireworks, which includes the safe and sane variety, is $1,000. But with administrative fees that base-fine could end up costing a person up to $4,000.

Using fireworks that are illegal statewide, like the mortars that launch projectiles into the air before exploding, can carry harsher penalties, Haubert said.

Depending on the weight of the fireworks confiscated those fireworks could escalate to fines of up to $50,000 and potential felony charges.

“If you have a whole trunk of this stuff you may be prosecuted by the district attorney,” Haubert said. “You could really face prison time or a serious fine.”

The City Council is meeting Tuesday night and will consider changes to city ordinances including possibly increasing the fines for fireworks use in the city and how citations can be administered. Current law requires a police officer to witness the act.

Photos or video can be uploaded to a file sharing platform and the link to the files can also be submitted with the report.

However, Haubert cautioned that residents shouldn’t put themselves in danger to collect video or photos and that the portal should not be used as a replacement for calling the police.

He’s hopeful that the portal can alleviate some of the calls for service the LBPD receives on a daily basis. If the portal proves to be helpful it could be carried over into future years to help with the reporting of illegal fireworks.