Starting a film club can be the perfect way to spend an entertaining evening with others who enjoy the arts as much as you do. Whether you’re hosting at your home or gathering in a community space, a film club is a great way to keep your mind active and your social circle full. Here’s everything you need to know to get started!

The Fun (and Benefits) of a Film Club

Watching movies has long been a favorite entertainment for couples, friends, and families to enjoy together. An art form that is appealing to the masses, movies allow us to sit back, relax, and escape our world for two hours. Beyond the fun, however, there are other benefits to watching movies in a group as we age. The stress-free environment allows those with chronic conditions or mobility issues to easily engage in an activity. Are you feeling lonely, emotional, or sad? Watching a comedy or feel-good flick can help turn your day around. For those with cognitive decline, watching a nostalgic film can trigger memories and prompt conversation. At the same time, other adults can use films to learn about the world and keep their brains active. By watching movies in a group, you get all of these benefits and the power of socialization. Being around others and sharing interests is one of the best ways to maintain your mental and emotional well-being as you age.

Developing a list of movies to show at your film club is an essential initial step. Don’t worry about having everything planned out for the next year. But an idea for the near future gives your club members anticipation. One popular method for populating a watch list is to consult film critics’ lists, Oscar winners, and box office charts. If you’re looking for films specifically recommended for seniors, check out AARP’s list of “movies for grownups” that you shouldn’t miss. If you’d rather tailor your list to your group’s interests, send out a poll and ask group members to share their top three must-see films that they’d also be happy to watch again. Compile the suggestions, pull the order from a hat, or send out a voting sheet to decide what comes first. 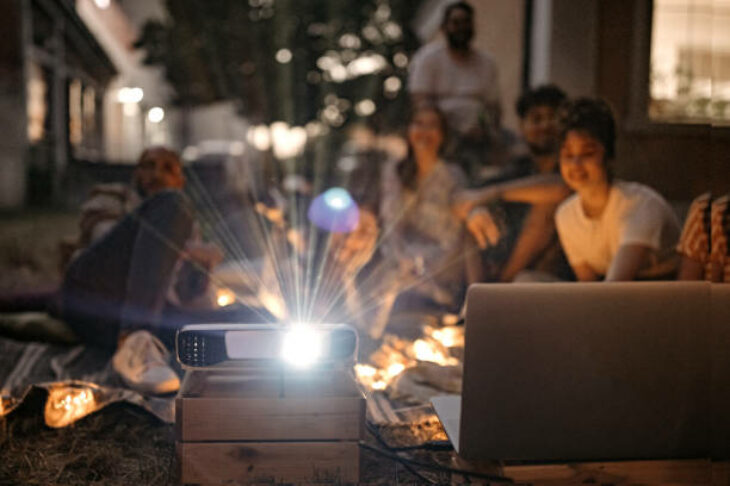 Before, During, and After the Viewing

Before each viewing party, consider sending around a notice reminding club members what movie is on the schedule for this week. This could be a brief synopsis that includes important thematic notes (violence, death, etc.) and a few “questions for discussion” that members can ponder as they watch. You can also assign snack duty to a specific person each week or suggest a wardrobe theme that goes along with the film. The sky’s the limit on fun and creativity, so don’t be shy.

During the movie, ensure plenty of comfortable seating options, check that the volume works for your group, and allow time for members to get snacks and drinks before the film starts.

When the movie ends, and the lights go up, it’s time for a lively discussion! Some movies won’t prompt much deep thought but can spark conversation about fond memories or funny anecdotes. The conversation after the film can help inform your group’s future movie choices and hopefully encourage additional discussion outside of the meeting time as well!

In the age of ever-changing technology, make sure to take advantage of your resources. A film club can include members in different geographic locations. Have everyone watch at home while logged into a Zoom call so that you can share reactions in real-time. Many films are also available in multiple languages or with large-font subtitles, so having an all-inclusive event is easier than ever.

So pick a date, cue up a film, and enjoy the inaugural meeting of your new club.