It was the moment when Robb Smith pulled out a small, jingling set of keys and unlocked the yet-unopened doors to the Long Beach Creamery in Bixby Knolls that I got a sense for just how unorthodox Smith’s delivery service, Alley Cat Deliveries, really is.

“I’ve got the keys to all their stores,” Smith said, matter-of-factly. “They trust me.”

Walking through the dim, empty ice cream shop he spots the two dozen packaged brownies, butter cakes and chocolate chip cookies he’s been tasked to pick-up and deliver to the ice cream shop’s Downtown location. He stacks them into a large blue freezer bag in the backseat of his Jeep Renegade, zips up, and locks the door to the creamery before he’s back in his car, heading south down Atlantic Avenue, fingers tapping the steering wheel. 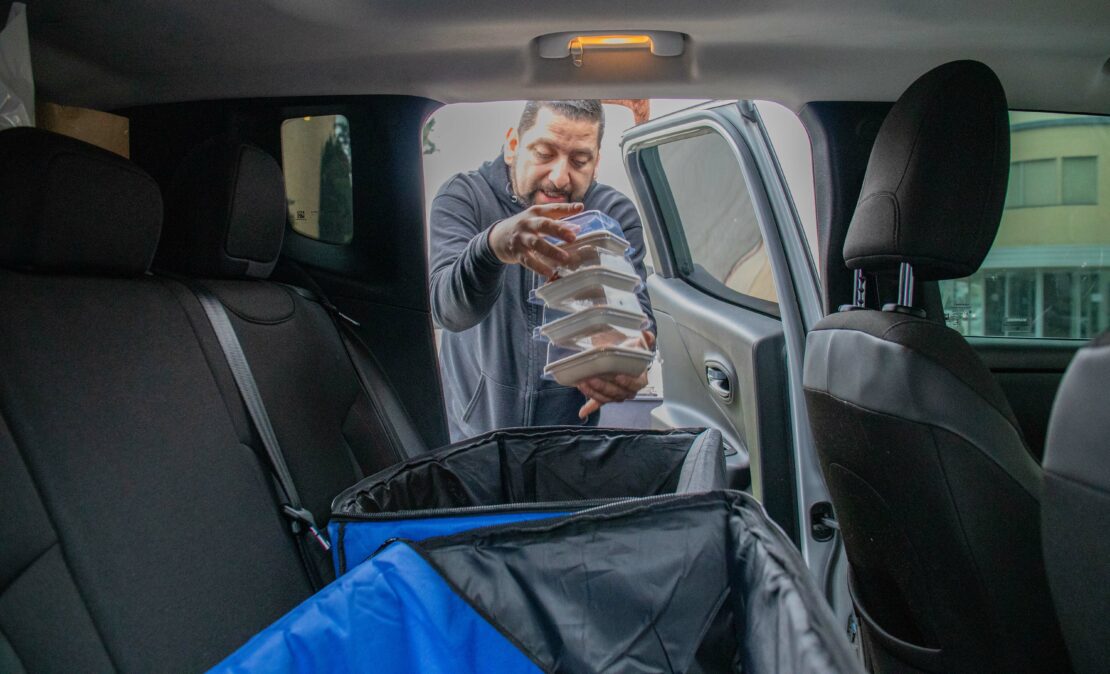 Runs like these, where he transports in-store product between stores or picks up ingredients for local businesses (which he’s also been asked to do in the afternoon), has been a lifesaver for his delivery service these days, he said, since he’s getting fewer calls for food and grocery deliveries now that people are opting to dine out and grocery shop for themselves again. Those deliveries during the peaks of the pandemic, when people were stuck at home, “really put us on the map,” he said.

To be sure, it’s a lot more than rides to the airport and grocery shopping. In the three years since launching Alley Cat Deliveries, Smith has earned a sparkling local reputation as a go-to delivery guy. His Yelp rating is a pristine five stars, teeming with rave reviews that reveal just how personal his service can get.

He’s helped people move apartments, pick up their pets from doggy day care, mail their packages, hand off court documents, deliver their cannabis. He did a sex shop run once for a client but said he won’t be doing that again—it’s too much information.

“I have a hard time saying no,” Smith said. “Like tomorrow, I have to get three bales of hay, which I do not like to do because I’ve done it and it gets all over my car…but what’s a vacuum, you know?”

Smith said he’s also exploring small freight and cargo transportation. “I know that we have a huge need for it in the ports,” he said, “I’m looking into the future.”

Not too long ago, the immediate future was all Smith could focus on. Shortly after moving to Long Beach from Redondo Beach after a rough divorce, Smith lost his apartment on Fifth Street and Chestnut Avenue. With no money to fork up the costs for a new place, he and his two kids, who are 7 and 9 now, were couch surfing for almost a year. Meanwhile, Smith tried to make ends meet delivering for Postmates.

The hours were especially grueling because he’d do it all on his BMX bike—rain or shine.

Exhausted, exasperated and occasionally rain-soaked, he wondered if it would be possible to branch out on his own. The business owners he’d chat with between deliveries all knew him by name and liked him enough. Why not cut out the middleman?

Smith enrolled in the Downtown Long Beach Alliance small business program and got his business license in 2019. He named his business Alley Cat Deliveries from all the side streets and alleyway shortcuts he’d memorized biking through the city.

He first approached Pie Bar’s owner, Laurie Gray, on what it would take to earn her business.

“She said, ‘well, they [delivery apps] are taking 24-30% of my profits from me. My question is how are you going to be different?’” Smith remembered Gray asking him.

Gray was referring to the fees delivery apps like GrubHub, Uber Eats, DoorDash and Postmates charge restaurants for its service, with some reported delivery apps charging up to 30% of their revenue per order.

Smith realized that he could get a leg up on the delivery apps by only charging the customer a flat rate for his delivery service. He settled on a competitive $5, though today he charges $9.

“So she gave me the account. Romeo Chocolates gave me his account. It took me a year to get 4th Horseman,” Smith said. Today he boasts 11 local business accounts, including District Wine, Pita Pitaki, Long Beach Creamery and The Attic.

“They’re not losing anything with me….that’s why I’m different. That’s why I want people to use us because we’re not taking anything from these people. Everyone wins.”

Convincing customers to make the switch from the convenient tap-to-pay of delivery apps to his service was the biggest hurdle. For this, Smith relied on consumer’s shop-local mentality. That, and his promise to return 20% of his weekly sales back to the community, be it through food, clothing or toy donations to local organizations, or helping out when he saw a need.

He’s made good on that promise over the years. After the 2020 looting, Robb sold T-shirts and used the $6,000 he raised to repair the broken windows and storefronts of nine Downtown business, including Pie Bar, Romeo Chocolates, Kress Market and Deli and iNails and Spa. This past Thanksgiving, he helped sponsor 11 families with multi-course Thanksgiving dinners.

Making a pit stop on our Long Beach Creamery run, we pulled into the AIDS Food Store lot to drop off a trunk-full of cereal boxes for their annual cereal drive, which Smith also participated in last year. 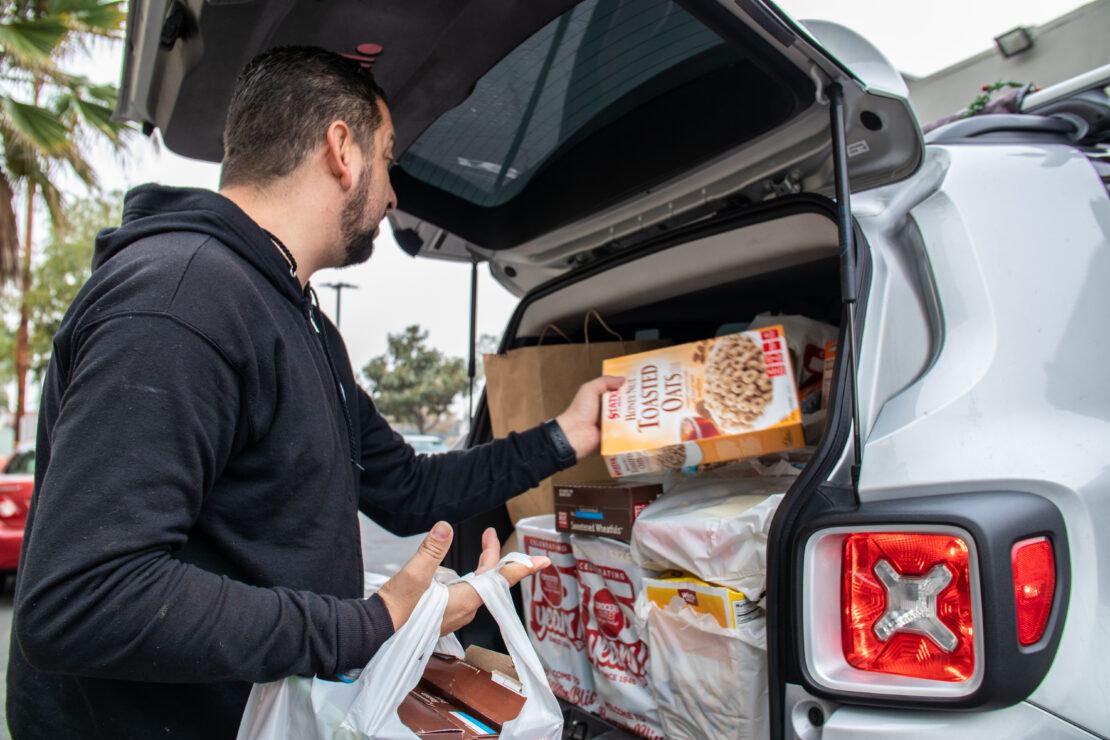 “It’s community supporting community,” he said. It’s a point he speaks on fervently, mentioned at least four times during our delivery excursion, but with good reason.

“When we were homeless for a year, Long Beach Coffee & Tea is the one who had our backs. That’s how Santa came to our house two years ago for Christmas when I didn’t have a pot to piss in,” Smith explained.

That same Christmas, Long Beach Pedal Movement donated a beach cruiser to help Smith make his deliveries. After a year and a half of courier delivery, a local business owner offered their car for his runs until he was able to purchase his own in August 2020.

“And I sat in the car and felt for the first time, like, this mine,” he reflected. “I just felt pride. I felt happy.”

He’s had a lot of time since to get used to his car. He’ll run deliveries for 10 hours a day, usually, though it’s not uncommon for him to work nearly 17 hours during the holidays, his busiest season, before coming home to tuck in his kids, which now includes a 9-month-old baby, to bed before climbing into his own bed at his home in West Long Beach.

He’s not as lithe as he was during his courier days, but he still puts his six-foot-one frame to the test. When we arrived at the Creamery’s Downtown location, he stuffed over 40 pint-sized ice-cream containers into a freezer bag and lugged it, with remarkable speed, into the backseat of his car. 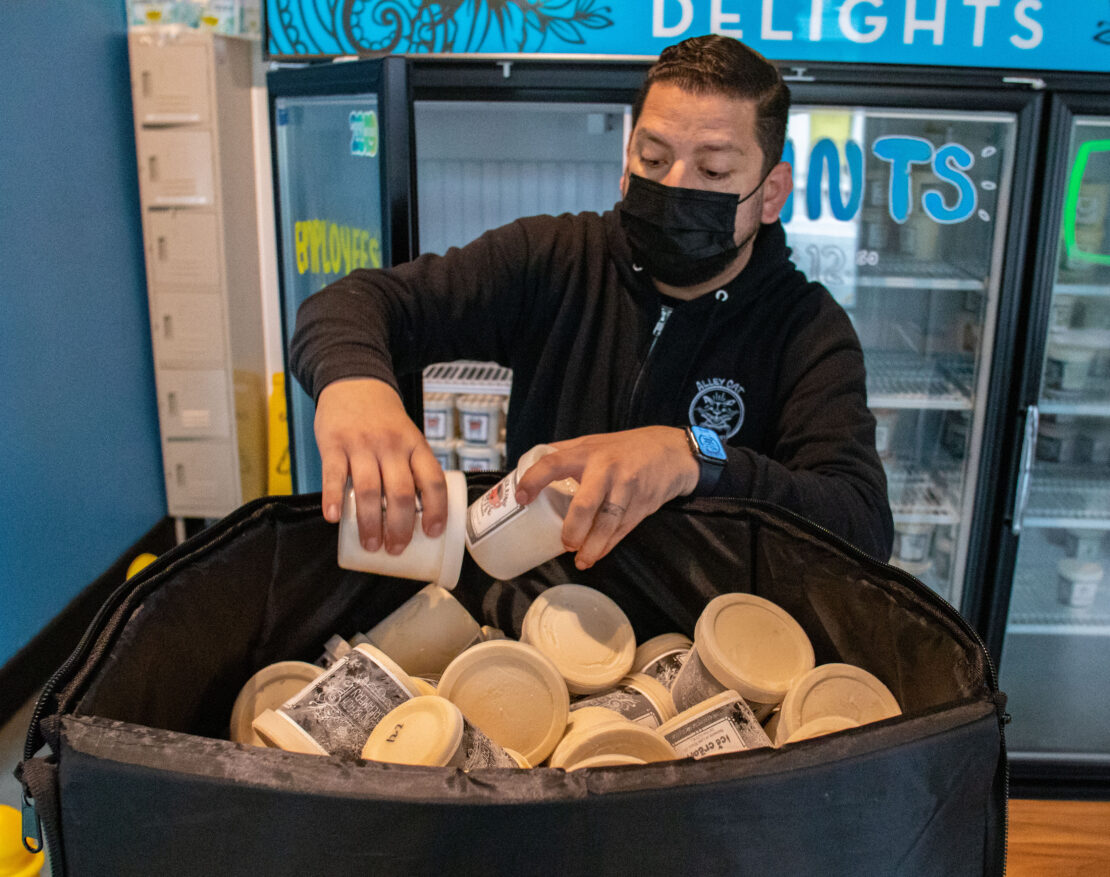 Back up Atlantic Avenue, we returned to Long Beach Creamery in Bixby Knolls. As Smith deposited the pints of ice cream into the freezer, in order of their packaging dates, owner Dina Amadril said what she appreciates most is Smith’s attention to detail.

“Robb goes the extra mile,” she said. “He’s always packing it up to make sure the inventory is right, using FIFO: first-in-first-out.”

Smith said he’d learned the method while working in the hospitality industry—one of his many odd jobs. He’s been a server at a pizza spot in Hawthorne, where he grew up; a manager at Starbucks; a service associate at a car dealership. He was an aerospace job recruiter at his last gig.

“I loved it, but I lost that job not having daycare,” Smith explained.

With each job, Smith was able to take away a piece of knowledge or a bit of savvy that’s helped him have that extra edge with Alley Cat. With his pizza runs, for instance, he always keeps the pies in a thermal bag so they stay level and hot.

“I’m not an on-demand service,” he cautioned. “I’m more of a personalized service.”

A glowing review on Yelp relayed a particularly astonishing (and atypical) run Smith took in pursuit of a Dodger’s jersey his client requested and needed before an evening game. He went to Dick’s Sporting Goods, found they were sold out. Then, on the way back from an LAX run, made a pit stop in Santee Alley (LA’s fashion district) and haggled a $100 jersey down to $70, all while FaceTiming his client so she could see exactly what she was getting.

“This man sure does go above and beyond the call of duty,” the client signed off in her review.

Testimonials like this make it easy to understand why Smith said 90% of his clientele are returning customers. But it’s also why he hesitates to hire people, though at times he’s desperate for the help.

“It’s really hard to find good people. I’ve tried to hire people, and I’ve had some good ones. I’ve had some bad ones, but no one could carry it the way I do. I just never want anyone to be let down,” he said.

Getting more organized is a bigger priority for him at this point. All of his orders are done via text or phone call and jotted down in the Notes app. Still, Smith envisions a bigger picture. One possibly with employees driving golf carts, less carbon footprint he explained.

“But then I’d sell ad space, called Cool Cat, you could see on the carts,” he said. “My mind doesn’t stop going.”