For more than two decades, the sand tiger shark known as Big Guy greeted Aquarium of the Pacific visitors with a big, toothy smile—which sometimes could be a teensy bit terrifying for small children. At 24 years old, Big Guy died Sunday of natural causes.

“It’s been really hard, honestly,” Rachel Munson, an aquarist II at the Aquarium who has worked closely with Big Guy for seven years, said Thursday. “When I first started at Shark Lagoon, I remember being a little bit intimidated by him … and just really growing to love him so much.”

“It’s going to be really, really sad without him,” she added, saying it is akin to losing a long-time pet considering she spent more time with Big Guy in recent years than with her own cats at home.

Munson said she will most miss feeding time with Big Guy, whose favorite meal was mullet—and occasionally some mackerel and mahi. The fish would be lowered into the 6-foot-deep tank using long grabbers, Munson said, and it would have to be released at just the right time.

“The way you could tell he was going to take that piece of food is he’d roll his eyeball up and take a look at it,” Munson said. “And you’d have to drop the food right away with the perfect placement because if he would bite the grabbers, he would get very upset and just storm off.”

Over the decades, the huge fish became a favorite among thousands of visitors as well as staff who described him as charismatic and gentle despite his menacing appearance. Big Guy “challenged misconceptions” about sharks over the years, with Aquarium staff sharing his story with tens of millions of visitors. 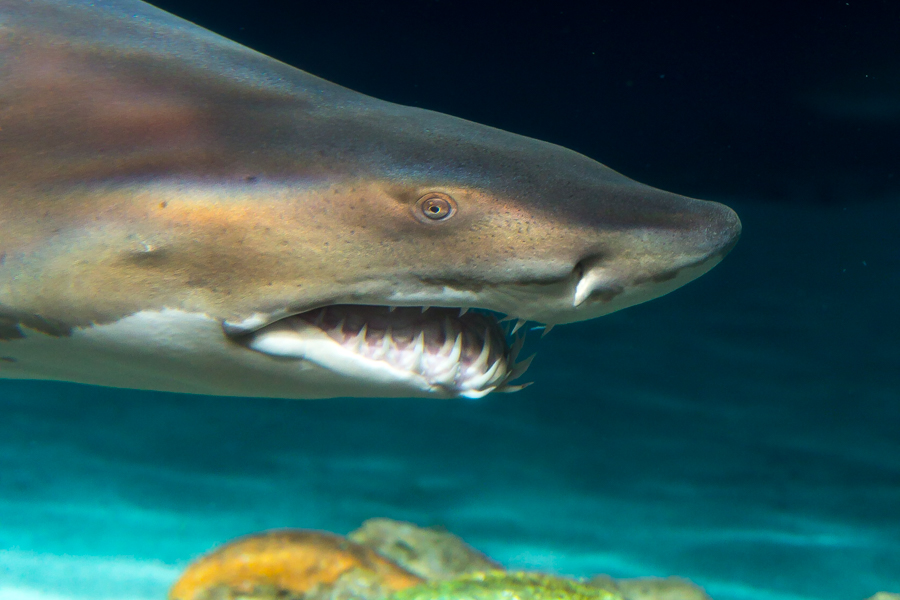 A close up of Big Guy shows rows of sharp teeth. Photo by Robin Riggs, courtesy of the Aquarium of the Pacific.

Big Guy first arrived in Long Beach in 2001 at the age of 3. As sand tiger sharks do, he matured between the ages of 6 and 7, growing to 8-feet, 4-inches long and 170 pounds, Munson said. His remains are to be cremated, Aquarium spokeswoman Marilyn Padilla confirmed.

Sand tiger sharks can live anywhere from 15 to 40 years, according to the Aquarium’s website. The discrepancy appears to be related to geographic location. Additionally, Munson said female sand tiger sharks are typically larger and often live longer than males.

The Aquarium posted about its loss on social media Wednesday and was met with dozens of comments from Big Guy’s adoring fans and well-wishers recalling fond memories and offering their condolences to aquarium staff.

“I’ve been seeing Big Guy since I was a baby when my parents took me to the Aquarium for the first time,” Sam Avelar, 21, wrote on the Instagram post. “My family and I really loved seeing him and his goofy smile.”

The aquarium was a big part of Avelar’s life and always a place of comfort, she told the Post in an Instagram message. Knowing that Big Guy is gone is “heartbreaking,” she said.

Big Guy was such a huge part of my memories as an AOP volunteer and I loved visiting him every time throughout the years!! I know he was in the greatest care living at AOP, rest in peace Big Guy 😭

“I had the honor to see Big Guy last summer with my friends and I was absolutely in awe of him,” Christopher Balsells wrote on Instagram.

“The impact Big Guy had on so many who visited the Aquarium will not soon be forgotten,” Jacqueline Simpson wrote.

That impact goes far beyond simply being eye candy for gawkers on the other side of the glass. Big Guy played a key role in shark research by the Aquarium’s long-time veterinarian Lance Adams, Munson said.

Adams helped develop groundbreaking ultrasound techniques necessary for the conservation of the species, Munson said. Adam’s research led to protocols for the safe examination of male sand tiger sharks’ reproductive system, which is crucial for the artificial insemination process.

“While he is gone, his legacy will live,” Munson said. “Not only in our guests who have come to love him, but also on the research and conservation side as well.”