Ollie the sea otter's cute and he knows it: Behind the Aquarium of the Pacific's viral TikTok account • the Hi-lo
- ADVERTISEMENT -

Ollie the sea otter, Harpo the sea lion and the Aquarium of the Pacific’s 12,000 other adorable critters have won the hearts of the public through a phone screen.

In the world of the Aquarium’s now-viral TikTok account, penguins march with rainbow flags in a Pride Parade (1.4 million views), Harpo, the aquarium’s social media star, belts out in song to pop punk rock (405,900 views), and—the post that fueled the account’s rise in popularity at the start of the pandemic—an octopus eats a toy boat loaded with mussels.

Madeline Walden, the aquarium’s 29-year-old social media curator—and the woman behind it all—isn’t striving for perfection, but rather authenticity.

The local aquarium’s TikTok following has grown to an astounding 2.3 million, more than any other aquarium or zoo in the country, Walden said.

She started the account in January 2020, just before the pandemic. The marketing team was supportive of the decision, she said, recognizing the potential of the sometimes controversial app.

The account had a mere 160 followers through March 2020, and then came the silly octopus video, set to intense “Jaws”-like music, which boosted the aquarium’s account immediately to 100,000 followers.

One of the account’s most viewed videos, currently at 14 million, features Ollie the sea otter munching on a heart-shaped, frozen clam “cookie” for Valentine’s Day.

“I know,” replies Ollie’s voice-over (and he’s not wrong).

TikTok is a video-sharing app owned by Chinese company ByteDance that allows users to share 15- to 60-second videos that often capitalize on trending music or jokes.

Devising mini narratives about sea otters, sea lions, penguins and other living creatures to both educate and entertain seemed like a perfect fit, even when the aquarium sometimes has to deal with the sad side of their business, such as when Maggie the sea otter died.

“We have these wonderful days of triumphs and celebrations, like the fun birthday parties and the feline singing contest,” said Walden. “We also have really down days when we unfortunately lose animals, because that’s part of life.”

While some videos are speedily produced to hop on a TikTok trend, which can change by the day, other videos take a couple of weeks to formulate.

Walden’s animal expertise has mostly come from learning on the job. She collaborates and brainstorms with the animal care department, constantly aiming to make each idea funnier, or reach even farther, while utilizing the team’s vast marine life knowledge.

On the aquarium’s TikTok, you can find videos ranging from a “Why do sea lions have black teeth?” explainer, which has accumulated 25.8 million views, to Harpo explaining his skincare routine (a sustainable seafood diet, and gentle saltwater exfoliation), racking up 531,000 views.

Walden said it is an honor to tell these stories, particularly about animals who have spent the majority of their lives at the aquarium.

She understands her audience (she’s spent hours utilizing the app herself), and she knows they want authenticity and the confirmation that life isn’t always picture-perfect.

Her strategy is working. 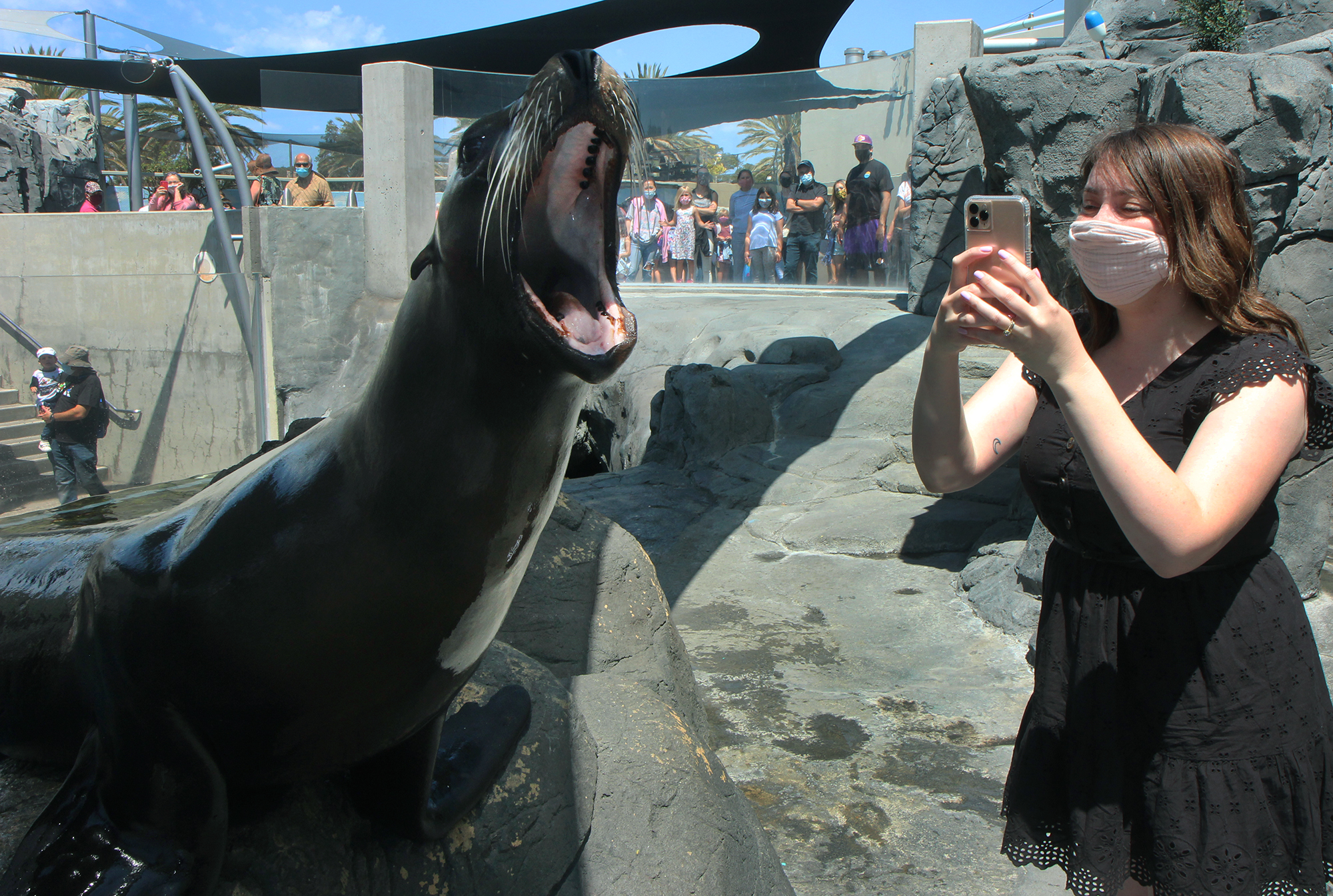 “We’re seeing comments saying, ‘I live in the U.K. and I’ve never heard of your aquarium, you’re on my bucket list now,’ and ‘I grew up in Long Beach, and now I live on the other side of the world, and how wonderful that I am able to follow my hometown aquarium on social media.’”

Walden is a Long Beach local herself and spent her childhood enjoying field trips and family excursions to the aquarium. She has now been employed at the aquarium for five years.

“The metrics and the numbers, they’re obviously great and awesome, but to me, it’s those connections that mean so much more, because those are people who are ultimately going to stay connected with us, and hopefully come back to visit one day,” she said.

Walden, who met her husband on MySpace and her bridesmaids on Tumblr, is no stranger to the power that social media has to connect, and hones this ability to create engaging content that makes science accessible.

According to Walden, starring animals and allowing their charisma to shine through has bridged this gap between the aquarium and the public, during a year when access to the aquarium was severely limited.

“Obviously this past year has brought a lot of hardship to the aquarium, but I really had this light in the dark with being able to create on TikTok and to connect to that community,” she said.

Join Walden live on the aquarium’s TikTok at 6 p.m. every Tuesday.