Back in September 2020, the Aquarium of the Pacific announced its inaugural African American Scholarship Program that would award California college students in aquatic sciences or aquarium related career paths.

Initially the program was going to award $50,000 to students who showed a commitment to studies in fields such as ocean education, animal husbandry, water quality, building maintenance or facilities, microbiology and business management. However, due to an increase in donor support, the aquarium was able to raise $100,000 for the program.

The aquarium received over 30 applicants for the program this year and on Feb. 11, officials announced 10 recipients who will each receive $10,000 to help fund their studies in addition to opportunities to participate in presentations, meetings, and other activities at the aquarium during the duration of the program.

“We hope to bring meaningful opportunities in the marine sciences to African American students and to bring diverse minds to solving the issues facing our planet,” said Anthony Brown, Aquarium of the Pacific CFO and committee lead on the program.

Each of the recipients have been invited to speak during the aquarium’s annual African American Festival, where they will also be honored. Viewers can tune in to watch the festival and ceremony online on Feb. 27. The awards ceremony will begin at 3:30 p.m. Click here for more info. 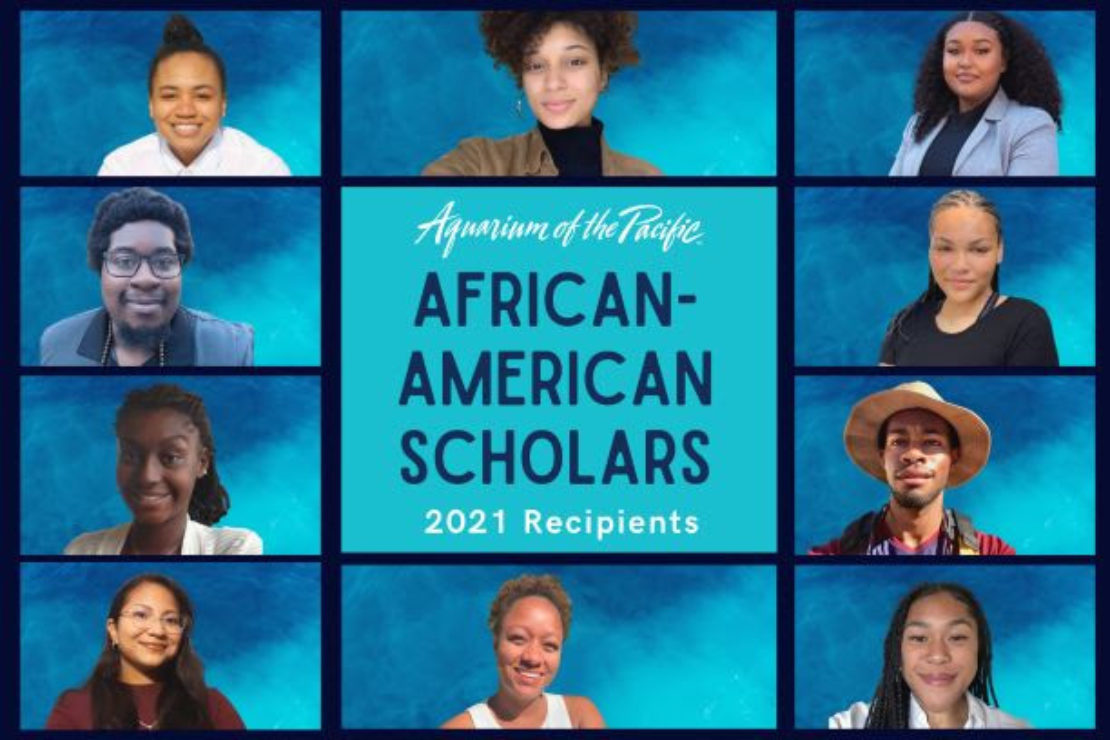 The 10 recipients of the African American Scholarship Program. Image courtesy Aquarium of the Pacific.

Recipients of the Aquarium of the Pacific’s African American Scholar Program:

Katherine Hannibal is an M.S. candidate in biology at California State University, Northridge and has a B.S in marine biology from the University of Rhode Island.

Newton Zachary Hood is a doctoral student in ecology and evolutionary biology at University of California, Irvine. Hood has an M.S. in biology from California State University, Fullerton, a B.A. in anthropology from the University of Illinois, and numerous awards, teaching positions, presentations, and volunteer work related to marine sciences.

Candice Mitchell is an undergraduate student studying marine and coastal science at the University of California, Davis and has an associate’s degree in business administration and economics from Berkeley City College.

Frederick Nelson is a doctoral student studying ecology at the University of California, Davis. Nelson has a B.S. in biology from Howard University and associate’s degree from Houston Community College.

Jahlen Pinelo is a microbiology student at University California, Riverside and has an associate’s degree in biological sciences from Antelope Valley College.

Danielle Sandoval is an undergraduate student in marine biology with a chemistry minor at California State University, Long Beach.

Elishebah Tate-Pulliam is an M.S. candidate in biology at CSULB and has a B.S. in biology with a minor in comparative literature from CSULB.

Ceyenna Tillman is an undergraduate student in marine biology at University of California, Santa Cruz.