The Art Theatre is firing up the ol’ popcorn machine once again this Saturday, although not for the reason you might be thinking.

From 4 to 6 p.m., the theater will be hosting a drive-thru concession stand, offering bundles of the crispy snack, candy and other refreshments so synonymous with the movie-going experience (you can check out the bundles, here). The event is a fundraiser of sorts, as proceeds will directly benefit the theater, but mostly it’s to connect with the community again, however briefly.

“I don’t think we could even raise enough revenue to make it worthwhile, it’s just that we don’t want to be forgotten,” said Kerstin Kansteiner, board secretary of the theater. “We just want to let folks know we’re still here.”

It’s been a long, quiet nine months for the city’s last remaining independent movie theater. As the pandemic continues its siege over the live-entertainment industry, businesses are trying to predict just how their industry is going to look once the world finds its footing again.

This year has seen unprecedented virtual viewership as people are forced to entertain themselves indoors. For the Art Theatre, known for its screenings of independent, documentary, animated, foreign language and first-run films, the pivot major film distributors are making towards streaming services is doubly concerning.

“It’s tough seeing our entire industry changing in front of our eyes, people streaming movies online, large distributors are releasing first-run films directly to homes now, so we don’t even know what our business model is going to be like when we’re allowed to open again,” Kansteiner said.

In April, The Art underwent some notable renovations—new paint, carpeting and an epoxy floor system easier to disinfect. They installed plexiglass shields in front of concession stands and revamped the air filtration systems. They took out several rows of seating to allow for greater spacing between rows and had plans to implement seat blocking, which would section off certain seats in each row so that only parties within the same household could sit six feet of each other. All this had been done in hopes that they could reopen by summer, a prospect that seemed promising as COVID-19 cases appeared to be declining. 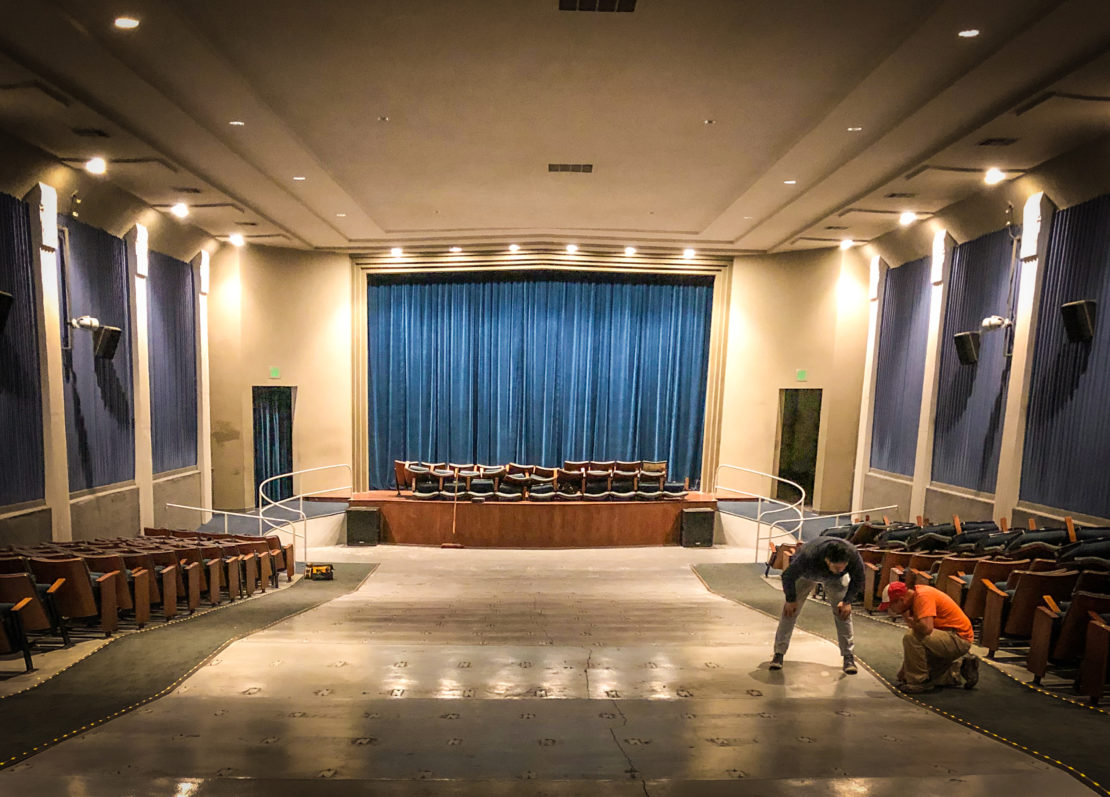 Crew members in the Art Theatre have removed rows of chairs to make way for a post-COVID configuration. Photo by Kerstin Kansteiner.

“We had so many moments of hope, I want to say in June or July we were gearing to open, numbers were looking good,” Kansteiner said.

Now the theater anticipates they’ll have to wait until at least the middle of 2021 to reopen, a harrowing forecast since the theater hasn’t had any reliable source of income for nearly a year. While the Art Theatre operates as a nonprofit, the owners of the space, Kansteiner and her husband/partner Jan Van Dijs, are still paying the overhead costs and mortgage.

“We open up the theater for community events for free, for film festivals, schools, for folks that want to premiere film and can’t afford to show it in a regular theater. All that is possible because we have that nonprofit status. And then, on top of it, we used to show first-run films and got paid the overhead for staff and keeping the lights, air conditioning and electricity [running],” Kansteiner said.

“It’s not a money-making venture. Every year it’s been a struggle, but in recent years, it was actually looking better and we were really hopeful, and this was a huge blow to us,” she added.

In October, The Art launched “Buy A Seat,” a fundraising campaign that offered patrons, for a donation of $500, a permanent seat at the theater fit with their own personalized name-engraved plaque mounted on the chair. So far, they’ve dedicated 17 chairs. Kansteiner said that for those looking to help, this donation would go the farthest.

In the meantime, those who would like to support The Art Theatre can on Saturday, Dec. 19 from 4 to 6 p.m. to pick up some candy and popcorn, or a bottle of wine if you are so inclined. Kansteiner said, at the very least, a visit would brighten the day for their only remaining on-staff employee, general manager Ryan Ferguson, who “hasn’t dealt with anybody in the last eight months.”

To purchase a concession bundle, book your purchase online. Patrons can pick up their goodies from the back entrance of the theater—easiest access is from St. Louis Street—where Ferguson and several other Art Theatre board members will be on-site to deliver the bundles.