Shane and Esther are playing the Squiggle Game, an art-based activity where one person sketches the outline of something while the other tries to figure out what it is.

They draw Pac-Man and boots, bear claws and mountains, and—though Shane does well—Esther is on an unbelievable hot streak, so much so that when she guesses “Elephants!” from the barest of sketches, Shane gives her that kind of amazed/angry look that says, “Get out of my head!”

The two of them soon erupt into the kind of laughter often shared by old friends. But, they are not old friends.

Shane Sweis is an 11-year-old boy being treated at Long Beach Memorial’s Jonathan Jaques Children’s Cancer Institute for acute myeloid leukemia, a cancer that affects the blood and bone marrow.

Esther Kim is an art therapist who has worked at the Cancer Institute for the past two years. Her job is to help kids with cancer like Shane deal with the anxiety, fear and myriad other complex emotions that they may be unable to talk about but can confront through art.

Research has shown that cancer patients experience many psychosocial and psychological stressors when dealing with the disease and its difficult treatment. Art is a powerful tool that can identify these stressors, empower the young patient in the fight against cancer and offer a complementary treatment method to relieve symptoms and gain insights into thoughts, feelings and behaviors.

“You help the patient identify and name that feeling that they don’t have the words to describe how they’re feeling,” Kim said. “Art therapy can help with identifying what that feeling is to them. They might not be able to name it, but they can show it through the choice of colors or scribbling something or how they use their lines. It can help them understand what they’re feeling.”

As you can imagine, Kim’s job is demanding under “normal” circumstances—not all kids are as enthusiastic as Shane, and she has had to deal with the loss of some children she has worked with—but it has been made that much more challenging by the demands of the pandemic.

Consider Shane, an active kid into all sports,—especially karate—who, according to his mother Roula, loves “everything about being outside in the sun.” Then came his cancer diagnosis that meant he not only had to spend days in the hospital but, because of COVID, was anchored inside a single room.

“Being at the hospital, especially with COVID, not being able to go outside the room at all, really changed [Shane’s] attitude,” Roula said. “I mean it changed completely.”

Though art therapy as a profession dates back to the mid-20th century, Roula, like many, had never heard of it or of its processes and benefits.

“I was not aware of it and when I first heard about it, because of how [Shane] was feeling, I didn’t know if it could help him,” Roula said. “But as soon as they explained things to both of us, you could see him light up about it. He really loves to draw and this really changed him. I mean at first, I was concerned he might hate it, but he took it the exact opposite way.” 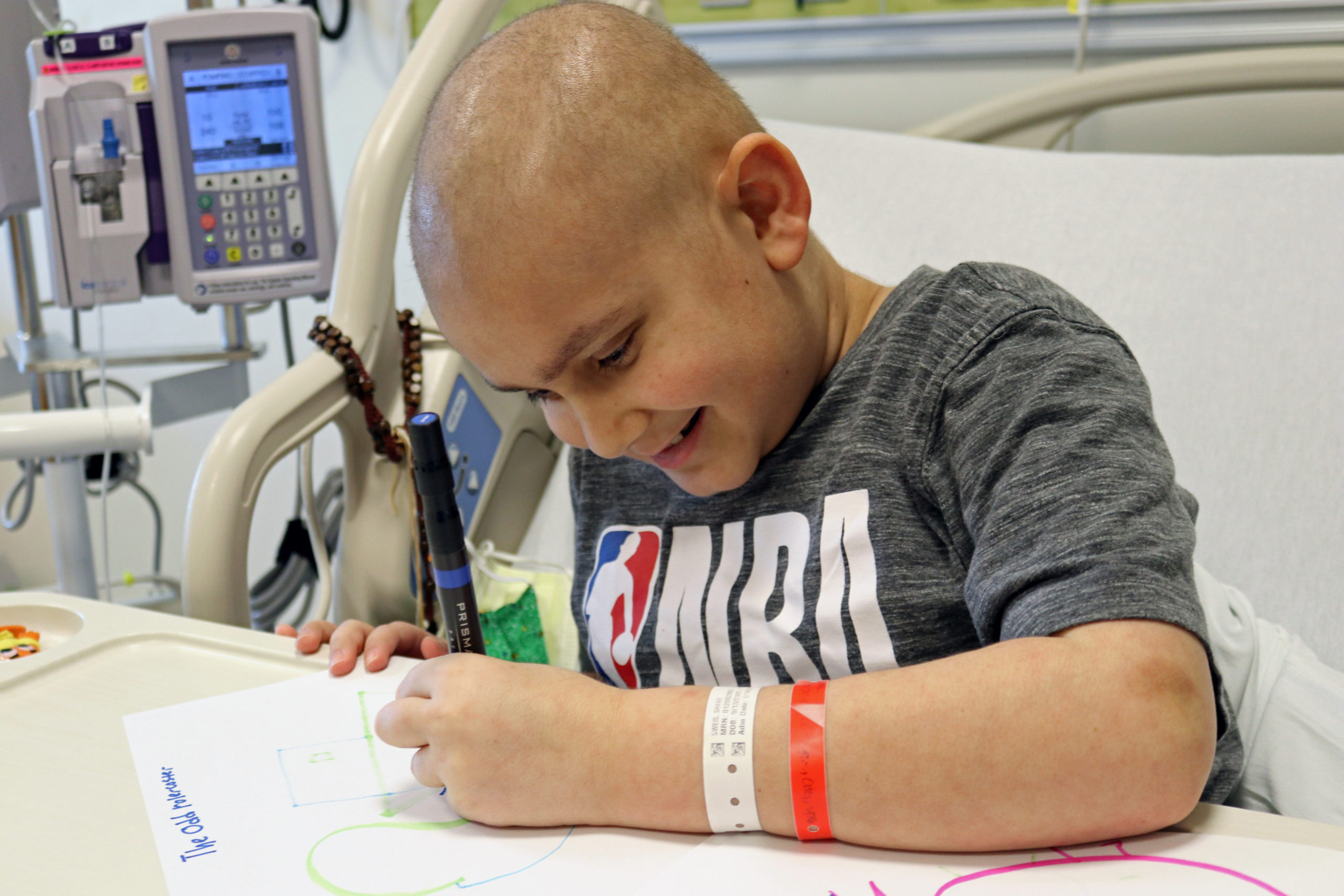 Shane Sweis says art therapy is fun because “you can do everything yourself without anybody else helping.” Photo courtesy of Jonathan Jaques Children’s Cancer Institute.

It’s arguable that the term “art therapy” is redundant. After all, our earliest ancestors used cave paintings to process their feelings about the hunt and death. When American artist Edward Hopper said, “If I could say it in words there would be no reason to paint,” he was basically defining art therapy’s principles. One could argue that art, at its base, has always been therapeutic.

It acted as such for Esther Kim who, as a young child, used art as a refuge when forced to deal with losses in her own family.

“Art definitely helped me a lot,” she said. “Not just with [loss] but with many things in my personal life. Art has always been there for me.”

And though now it is her profession, she still uses it with what seems a childlike trust. When she is working with a child, she lets the art take the lead and lets the child set the pace. Some kids like Shane are eager to get things going, other kids hang back. Some kids are curious and open to trying new things, others would rather be on an iPad and some are “just not feeling it that day.” Kim may be working with a child who has been in the hospital for a couple days or one that has been there several months. Whatever the circumstance, she said it usually takes time for her to build trust and rapport with a patient.

“Some are much more inviting and they want to talk to you, some may be more shy or more slow to warm up to you,” she said. “I try to do my best, letting them know that therapy is available while they’re in the hospital, but I’m sure staying in the hospital can be very scary for them.”

Because of that, Kim doesn’t force matters. Rather, she reads situations through facial expressions and body language and, ultimately, with how enthusiastically a child takes up a marker or crayon. Kim’s approach allows her to connect with children on their terms. That familiar back-and-forth with Shane was achieved in just a couple of sessions together.

In the end, Shane said Kim’s approach helps him feel in control at a time when, for the most part, others determine where he will be and what he will be doing.

“For that moment, you can draw whatever you want,” he said about his time with Kim. “You can express basically what you’re feeling. It’s actually really fun because you can do everything yourself without anybody else helping.”