Amy Solis is not just a jewelry maker— she’s a “Maker of Small Objects” and an artist. She carefully saws, files, solders, buffs and makes every single piece of hers shine.

In her garage studio, Solis has carved out a neat corner workspace. Next to her stacked washer and dryer hangs a metal wire cloud sculpture with hog casing wrapped and stitched around it.

“I’ve been playing with corroding metal with it—it turns it green,” she says after apologizing for how the heat may bring out a smell in the casing (the soft incense wafting in the air masked any possible unpleasant smell).

As she begins a demonstration of how she makes one of her pieces, while journalists watch and record, Solis nervously darts around her workspace, trying to recall the process of what she does up to nine hours a day, six days a week.

She’s working on a 1-by-2-inch brass pin with looping letters and several intricate cut-out holes. Usually, she does each step in batches, but this time she’s showing her process with just one piece.

After the first step of cutting and pasting a paper template onto a brass metal plate, Solis dons safety glasses and pulls a tool from her wall of hammers. She pounds indentations onto the metal plate to create a guide and uses a dentist’s drill to create holes. 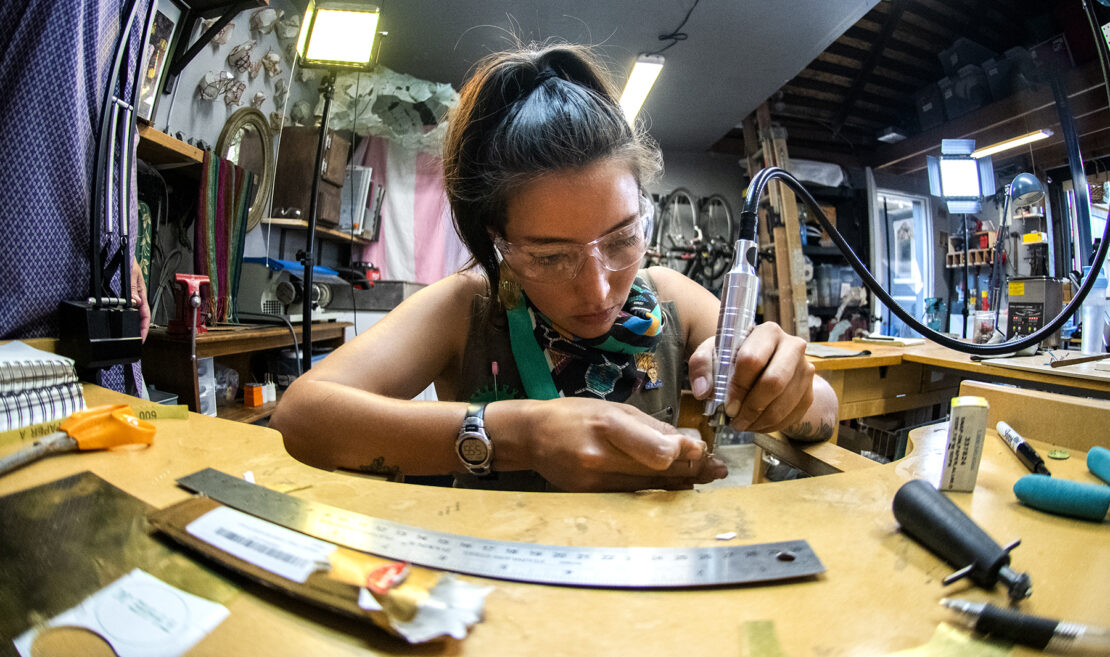 Once that is out of the way, she begins her favorite part: sawing.

“It’s almost like coloring, you don’t have to think about it,” she says.

Threading a wire-thin saw through the pre-made holes, she carefully cuts out the inlets of each letter, slowly looping around each lowercase, cursive letter: a-b-o-l-i-s-h.

Nearly through the bottom part of the blocky “Pol(ICE),” her saw blade snaps.

“Some days I go through a ton, some days it’s just one,” she says as she reaches to thread a new blade into her jeweler’s saw.

Solis has been making jewelry for only two years, but she’s been creating things since she can remember. She and her family immigrated to the United States from Ecuador when she was 6 years old. Solis is undocumented and was always told not to talk about her immigration status while growing up in her conservative, Christian household in Riverside County.

It’s why her jewelry always makes a statement now: “Undocumented,” “Queer,” “Abolish Pol(ICE),” “They Them”

“I was told to be silent about a lot of my identity,” Solis said.

She started learning the phrases for issues she was experiencing in college while taking Women’s Studies classes and studying fine arts.

“It blew my mind to have all of this language around, you know, there’s patriarchy and there’s misogyny and all of these things that I felt that I had no language for,” she said.

Solis recalled how shocked she was when she heard a student activist at a rally yell in a microphone, “I’m undocumented and I’m not afraid!” She wasn’t out about her documentation status in college yet, worried she would have to pay more for the classes she was already having to pay for without financial aid.

She began working with activist groups like the Long Beach GRRRL Collective, putting on shows and learning group sessions.

After college, she was able to get DACA, a work permit for people brought to the U.S. as children. She was working full-time for a worker cooperative non-profit, but she found herself at a computer all day, not creating.

“I find no greater joy than to be making things with my hands,” Solis said.

So she made a plan to quit her job: She and her partner bought their house and she began saving all her money, going to jewelry entrepreneurship night classes at Long Beach City College. She went down to part-time work for six months and then finally quit.

She had plans to sell her work at art fairs and events—then the pandemic hit.

Solis had trouble selling her work, which was mostly “cute stuff,” but she says it wasn’t up to her standards now. To her, it felt like she was living two parts of her life separately: her activism and her jewelry-making.

“The pandemic really forced me to sit down and think about what I wanted my stuff to say and do, not just for aesthetics,” she said.

Her first piece with this idea was earrings made of bent wire saying “gua gua chullita,” an Ecuadorian phrase to mean “a creative child.” After the killing of George Floyd and subsequent protests against police brutality, she added more designs to her line.

She took an Adobe Illustrator class and learned how to design templates she could recreate with brass, copper and silver. She slowly built out her studio throughout 2020 after having started with just a small jewelry anvil and saw frame— she just recently got a professional ultrasonic jewelry cleaner machine.

Solis said she creates with metal because she knows metal will outlast her, but she also has hope that one day she won’t need to make jewelry that makes a statement because being queer or undocumented will be more widely accepted and using different pronouns will be more normalized.

“If somebody finds this random piece of metal that says ‘they them’ in maybe 80 years and they say, ‘What is they them? Why would you have to use that?’ Then I’ve succeeded,” Solis said. “I guess it just gives me hope to know that someday these things won’t matter anymore because we’re beyond it.”

Amy’s designs can be found on her Instagram and Etsy shop.