Hear the thunder? North Long Beach's Thunder Studios is making a big noise in the showbiz game • the Hi-lo
- ADVERTISEMENT - 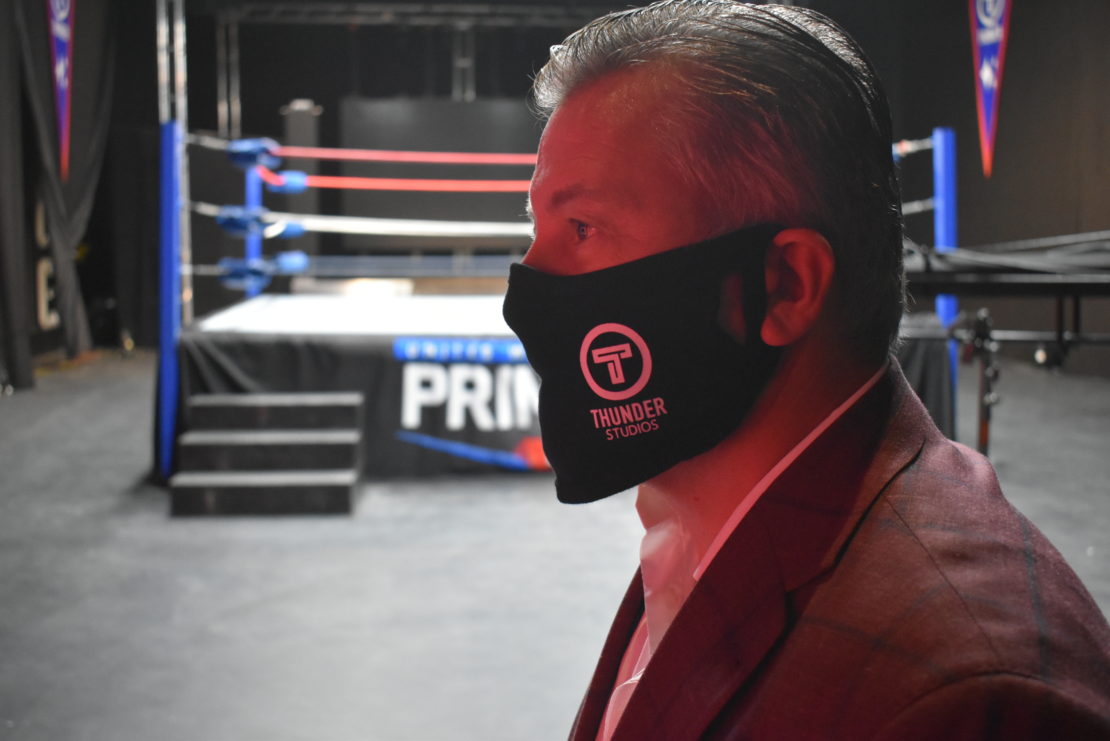 Rodric David, owner of Thunder Studios in northwest Long Beach, looks on at the production set where pro-wrestling events for United Wrestling Network are shot and broadcasted at the studio. Photo by Sebastian Echeverry Friday, Dec. 4, 2020.

Tucked away among a chaotic portion of industrial Long Beach sits Thunder Studios, an entertainment production facility that has been operating pretty much incognito since its inception in 2013. As the studio’s owner and visionary put it, “not a lot of people know what we do here.”

What the team at Thunder Studios does is pretty much consistently on the cutting edge of where film, TV, esports and virtual broadcasting is going, complete with big money contracts, celebrities and a pioneering vision forward—all of it from a little-known corner of northwest Long Beach.

While most locals don’t know what comes out of Thunder Studios, or that it even exists, chances are they’ve seen what gets produced in the facility’s 150,000-square-feet housing 20 production sets.

Prior to the coronavirus pandemic, Thunder Studios hosted live events, including live esports tournaments that people could attend. More than 5,000 attended one such event where there was food venders, games and booths for visitors to mingle. However, like just about everything else, all that has been put on hold.

Still, the pandemic has only impacted live events at the studio, having barely dented its day-to-day operations. Inside recently, hurried stage workers could be seen moving from filming studio to filming studio, while crews were in and out of the loading area bearing props to create the backdrop seen in Target commercials or put together elaborate stages for hip-hop music videos.

Every room is strictly cordoned off to abide by the state’s coronavirus regulations, masks are seen on all employees and signs are plastered everywhere to remind the staff to socially distance. 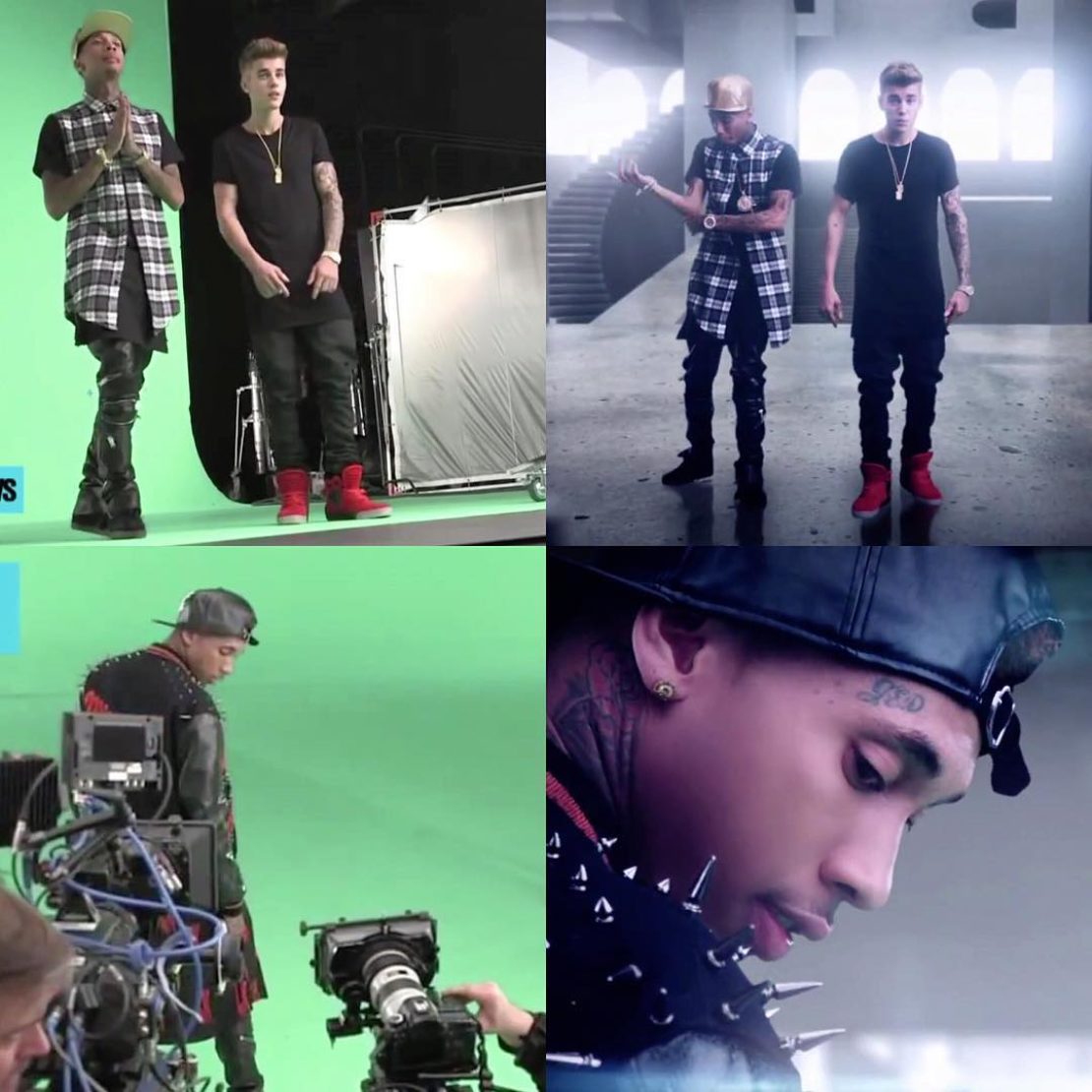 Artists Tyga and Justin Bieber filming a music video for the song “Wait a Minute” at Thunder Studios. Courtesy photo.

The ringleader in all of this is Australian-born Rodric David. While his facility has housed some of the biggest names in pop culture, his ambition to capture the Gen Z audience—which he says is misunderstood—is what drives a lot of the behind-the-scenes work his studio has been developing prior to the pandemic.

David graduated from USC as a theater major, married his college sweetheart and traveled the world before settling back in Southern California. He bought the warehouse that houses Thunder Studio back in 2013. GMC, which formerly owned it, used the space to shoot photos of their vehicles for owner’s manuals.

Growing up in Sydney, Australia, rolling thunderstorms were some of the first memories David can remember and the name “Thunder” seemed appropriate for a production studio where the sky was the limit. 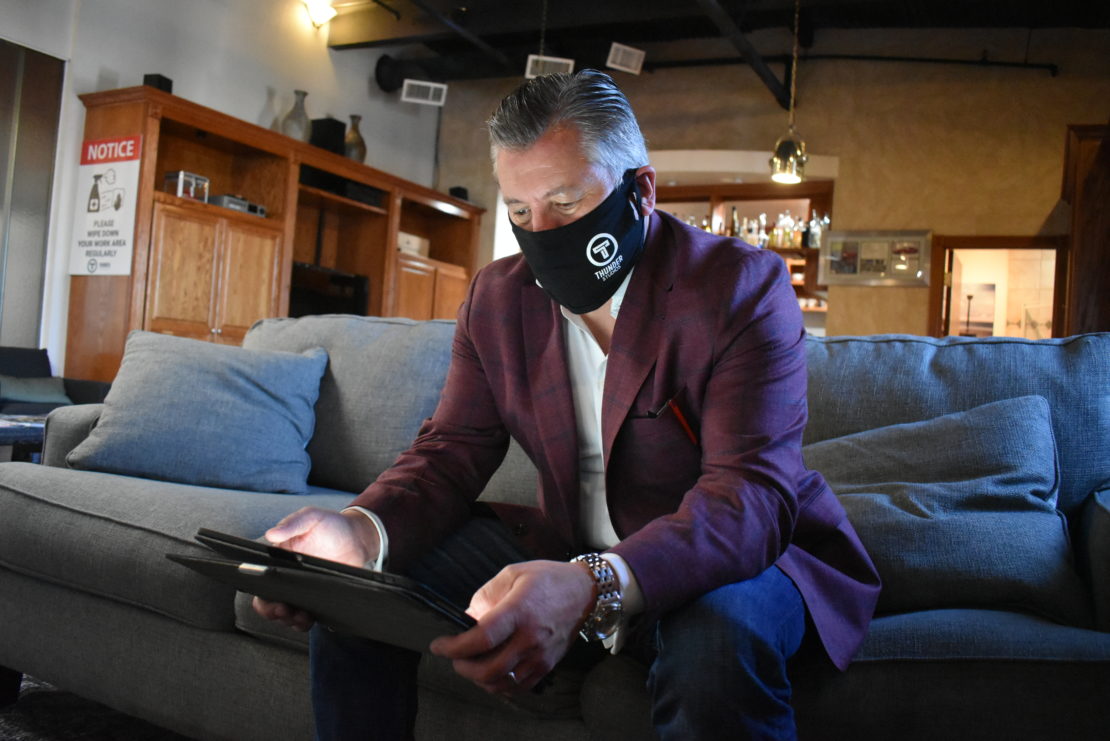 At first, Thunder Studios was—and to an extent, remains—a business-to-business company, meaning the company doesn’t primarily cater directly to consumers, but rather offers filming stages and equipment for production companies. The pandemic has only accelerated the next stage in Thunder Studios’ ambitions, which is to develop virtual worlds where content creators, such as YouTube celebrities, companies and everyday people can interact.

As more people stay indoors to slow the spread of the virus, many have turned to digital forms of interaction and entertainment—just what Thunder Studios needed to get ahead of the game.

“Business is booming,” David said. “You’re going to see significant behavioral change, and the challenge is, how to capitalize on that change? Events that rely on ticket sales—you’re exposed.”

The pandemic has sped up the virtualization of live events, David says, which has brought the worlds of social media, gaming and entertainment closer together.

The Burning Man music festival, like many others, was canceled this year, but virtually it carried on with the help of Thunder Studios.

The studio was tasked with virtualizing the music festival this year. The team there built a virtual environment, or map, and filled it with elaborate sound stages where the musicians that were supposed to perform live at the festival instead live-streamed their shows to the virtual stage. The viewer, in this case, in the form of a customizable digital avatar, could roam freely around the map and interact with other avatars who were controlled by human beings sometimes thousands of miles away.

In a similar fashion, Thunder Studios’ next ambitious project is called Cyberworld, set to go live on New Year’s Eve. As the title suggests, Cyberworld will be a free, online music festival where people can participate as avatars with their friends in the digital world. The headliners David has been able to sign on for the live event are some of the biggest names in trap/hip-hop, including Lil Uzi Vert and Playboi Carti. The project will be produced out of the North Long Beach studio and broadcast worldwide.

Being in Long Beach gives a sense of pride to David and his crew. To him, it proves that you don’t have to face the struggle of Los Angeles traffic or travel long distances to film high-end entertainment projects.

“We go out of our way to source as much as we can from the community and to reach out to Long Beach,” David said.

The studio buys Rosepark Roasters coffee and hires some of its employees from the local area. The food Thunder Studios provides on site or through its catering branch is from local shops, and anytime talent comes to the area to film a project, David said he encourages them to stay in Long Beach hotels.

“We’re uniquely proud of being in Long Beach,” he said.