If someone from the streets has a story to tell, chances are northside Long Beach gang member-turned writer Stanley James II has the platform to let them tell it.

The author of a novel loosely based on his life—”The Bust: Live by the Gun Die by the Gun“—James, through his publishing company,  Certified Gang Tales, has helped publish urban-fiction stories from writers who’ve experienced lives in organized crime and are trying to push that life away through their writing.

“The Bust” was James’ first book and was co-published with No Brakes publications in 2017. The path of being a published writer has allowed James to meet icons in entertainment, such as Vince Staples, and has opened doors to James that had once seemed unimaginable.

Since the release of his first book, James has offered a platform for others to tell their stories with his publishing business, which officially launched this year. One of his seemingly unorthodox signings was a fellow ex-gang member called Travon Edwards from Eastside Rollin 20s Crips, a rival gang that had feuded with the gang James belonged to—Northside Four Corners Blocc Crips “since the beginning.” But bringing on Edwards also served as a gesture of positivity within the two communities.

“If these two Black men from enemy hoods can get money, then it inspires that younger generation,” James said.

Edwards, originally from Florida, wrote his first book, “Money Mac Murder,” in 2019. His writing began as a way for him to look back at his memories as he got older. When James reached out to Edwards to sign him to his publishing company, Edwards admits there was some mistrust at first.

“I gotta be honest, at first I didn’t think his intentions were pure,” Edwards said. “I mean, he’s the enemy.” 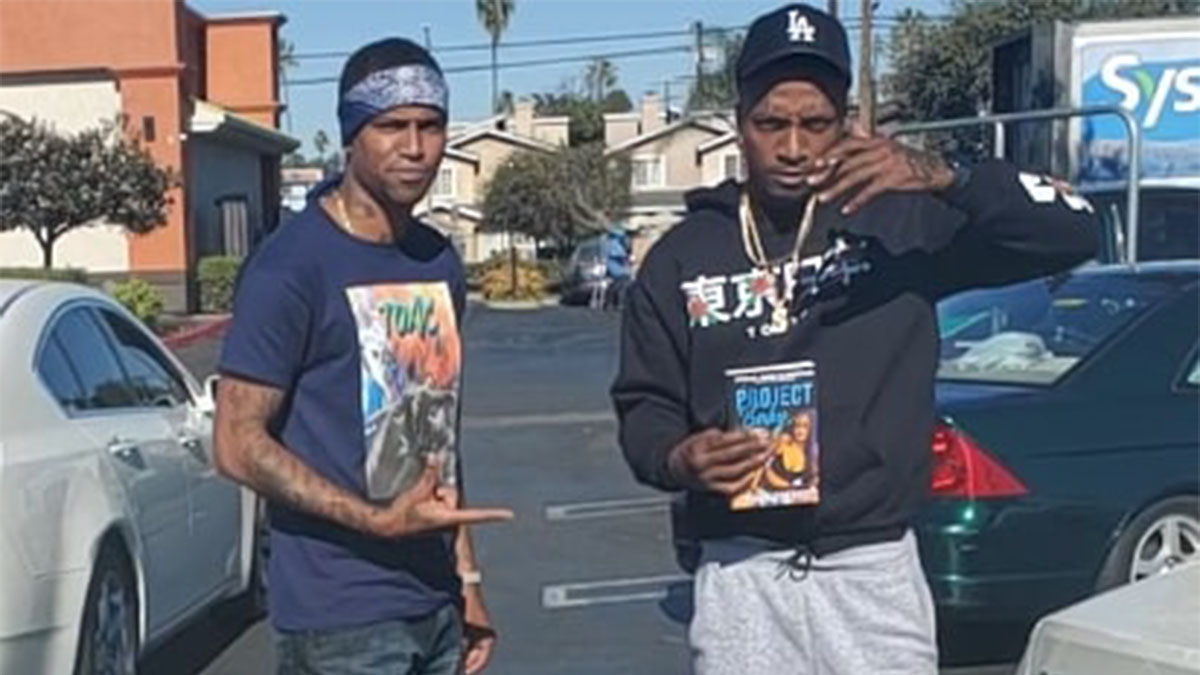 But Edwards quickly realized that James was sincere. The book Edwards wrote under Certified Gang Tales, Project Baby, tells a story similar to James’, in that it’s loosely based on Edwards’ rise in his gang but from the point of view of a woman. Now, it’s nothing but admiration and respect between the two writers, Edwards said.

“We’re both grown and past the bullshit, I was like, ‘You’re just like me,’” Edwards said. “If we were in prison together we would be like best friends, but in the streets, politics get in the way.”

Growing up surrounded by murders, drugs and feuding hoods, James—like most kids—was oblivious to all of that.

“As a kid, everything is just, like, ‘We having fun,’” James said. The only thing he was concerned about was playing basketball at Coolidge Park, growing up in what he calls the last Black-owned neighborhood in Long Beach; from Artesia Boulevard to Victoria Street, the tight-knit community is home to many Black residents and Black-owned businesses.

When James was in the 6th grade, he began noticing the street life that had surrounded him his whole youth. That street life was the daily operations of the Four Corner Blocc Crips, which originated from the Square Hood Crip in the 1970s. In the 1980s, the organization changed its name to what it is today and expanded its turf to one of the largest in Long Beach.

When he was in high school, an older friend who he referred to as Big Face, was sentenced to jail for dealing drugs. Big Face was always there to support James and was a prominent mentor in his life. He had shielded James from gang life, but with him out of the picture, James took over Big Face’s role in the gang and began selling drugs himself. James studied at Wilson High School during the day but was working within the Crips organization at night. He was 17 at the time, and was completing his drug runs virtually unnoticed.

“I was a good student, had good grades and was active in sports—I kept a low radar,” he said.

When Big Face returned from jail, he officially introduced James to the gang. From about 2005 to 2014, James made a name for himself within the gang, which earned him the name Baby Face.

It wasn’t until his arrest for robbery and drug dealing at age 18 that made him realize the path of a gang banger—or a “crash-course dummy” as he called it— was not the path he wanted to continue on. James recalled being handcuffed and escorted through Wilson’s campus. As he sat in a jail cell with grown men, dressed in his school uniform, he thought to himself, “Man, this ain’t it.”

From age 18 to 22, James was in and out of the prison system on drug charges. While he was doing time, he wrote down his experiences in the gang and the hardships he had been through. James’ mother had instilled a passion for writing early on in his life. His mother would give him notepads and pens, and he would write poems and songs for his church.

“I didn’t have no one to vent to, no brothers and did not want to vent to the homeboys,” James said.

He kept a record of everything written in something he called a “chap book,” a scrappy set of pages containing short stories and poems held together with staples.

“I was writing short stories in jail,” James said as he recalled how “The Bust” was written. “It was a murder. I lost four best friends to a murder. So, I’m documenting everything, and after so many months, I had a lot of stories that a lot of kids can use.”

The chap book proved to be his ticket out of the street life as James began selling his short stories on the streets throughout LA County. His stories were eventually picked up by Terry Wroten and Benny Cool from No Brakes Publishing based in Los Angeles. 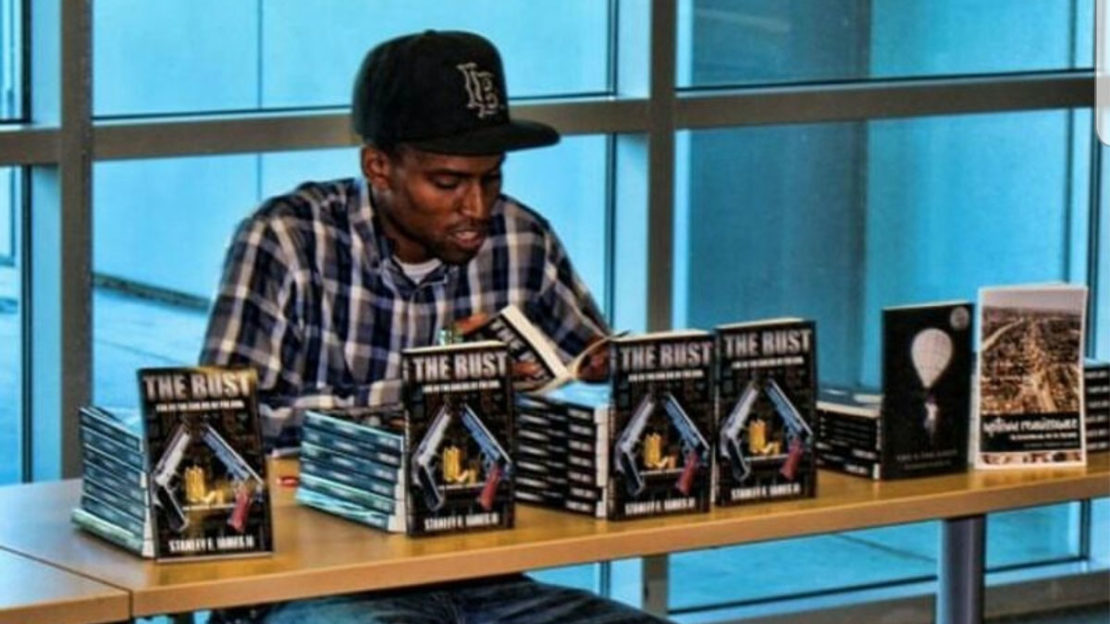 Stanley James II reads an excerpt of his first book, “The Bust: Live by the Gun Die by the Gun.” Courtesy photo 2017.

Many readers of James’ first book were kids serving jail time at Los Padrinos Juvenile Hall in Downey, or in other juvenile correctional facilities and federal prisons. He received an outpouring of emails and letters telling him his story and his writing changed their lives. At its core, the mission of Certified Gang Tales is to inspire individuals with personal stories of urban hardships.

James said he’s never claimed to glorify gang violence or the hardships it may bring. Gang life is a revolving door, James said, and it’s one he’s not keen on opening for the youth. Through example, James is showing younger individuals in his community that a person who once walked in their shoes can make it out of that life. His platform also protects stories from the potential of cultural appropriation that are deeply rooted in niche communities.

“We see these large corporations profiting off our culture and lifestyle,” James said. “Us, that originate these stories, get paid with death and incarceration. We get paid for our actions now.”

Ultimately it puts trust in individuals who didn’t feel like their stories would matter, to tell them the way they want to. When James reached out to Edwards for the collaboration, Edwards had just lost his job, he didn’t feel like anyone would give him a second chance. But with his first book selling well, and another book, “Married to the Mob,” on the way, the platform James provided has given him that chance.

“I never imagined that anyone would care about what I was talking about,” Edwards said.