The Aquarium of the Pacific just got a whole lot cuter thanks to its newest exhibition “Babies!” which features over 40 species of the aquarium’s many baby animals and sea life.

“This is my first time to see a new exhibit opening and it’s really exciting,” said aquarium President Peter Kareiva who took up the position in 2020. “It’s what I would call a heart-and-mind exhibit and I think of the aquarium as a heart-and-mind institution.”

The new exhibit officially opened May 27,  but guests who visited on Thursday were granted a first look at the darling area teeming with tiny fish, young sharks, drifting jellyfish and one juvenile California desert turtle named Sally.

The bulk of the exhibition is on the second floor of the Pacific Visions wing, but the other part of the exhibit you don’t want to miss is in the Northern Pacific Gallery, which features four new otter pups that were orphaned up north but are now being reared by two of the aquarium’s female otters. It’s a mutually beneficial arrangement, said aquarium mammologist Erin Lundy, because the pups can develop with the same nurturing they would receive in the wild while also helping the adult females learn how to be surrogate mothers. 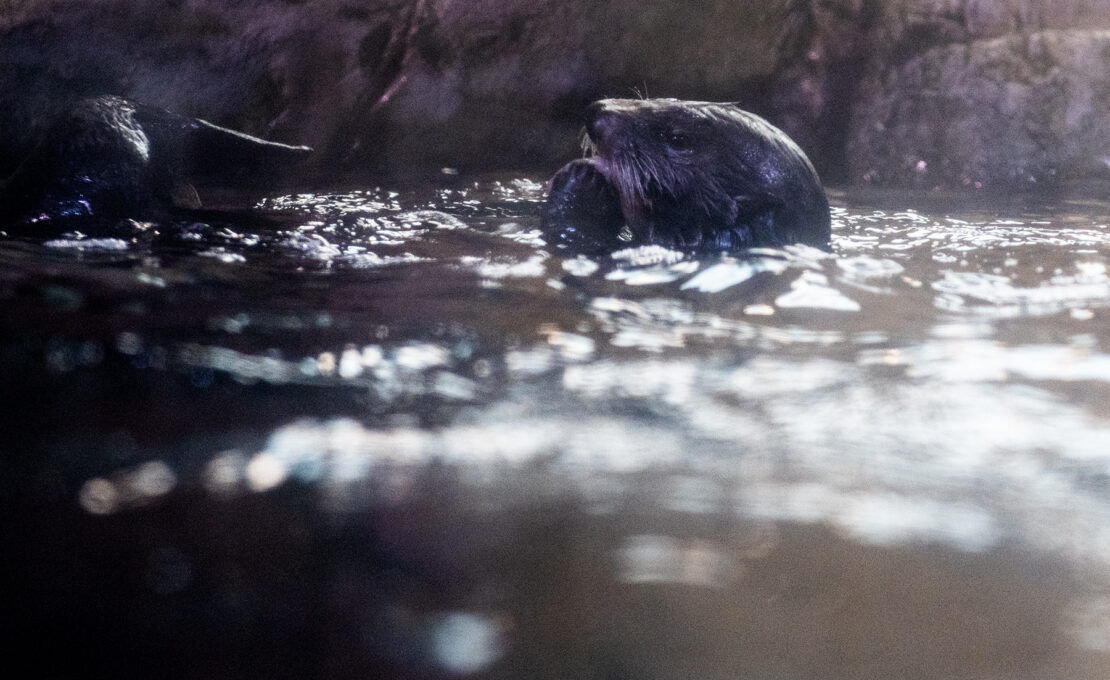 A juvenile sea otter eats shrimp for lunch as it swims among other otters at the Aquarium of the Pacific. Photo by Thomas R. Cordova.

Walking into the main exhibit, guests are greeted by the aquarium’s new jelly lab, a table that’s stationed with various transparent tanks trickling with water. It reveals just how aquarium staff grows the baby jellies while showing them in various life cycle stages.

Many of the featured babies were either born at the aquarium, like the jellyfish, or at another zoo or aquarium. Some were also sourced from a sustainable supplier, according to the aquarium.

“Babies!” exhibits are designed to replicate the many ocean environments that act as nurseries for the young sea creatures, such as coral reefs and seagrass beds. An especially important habitat for these young is mangrove trees. Their long, twisted roots grow deep into the water, which provides shelter for young fish, sharks and other wildlife. In the exhibit, the mangrove display is the most prominent attraction, with over 200 fish from six different species.

One of these species is the golden trevally. In youth, the fish shine bright yellow, but their color changes to a silvery hue when they mature. The adults swim in the aquarium’s largest exhibit, the Tropical Pacific Gallery, on the first floor. 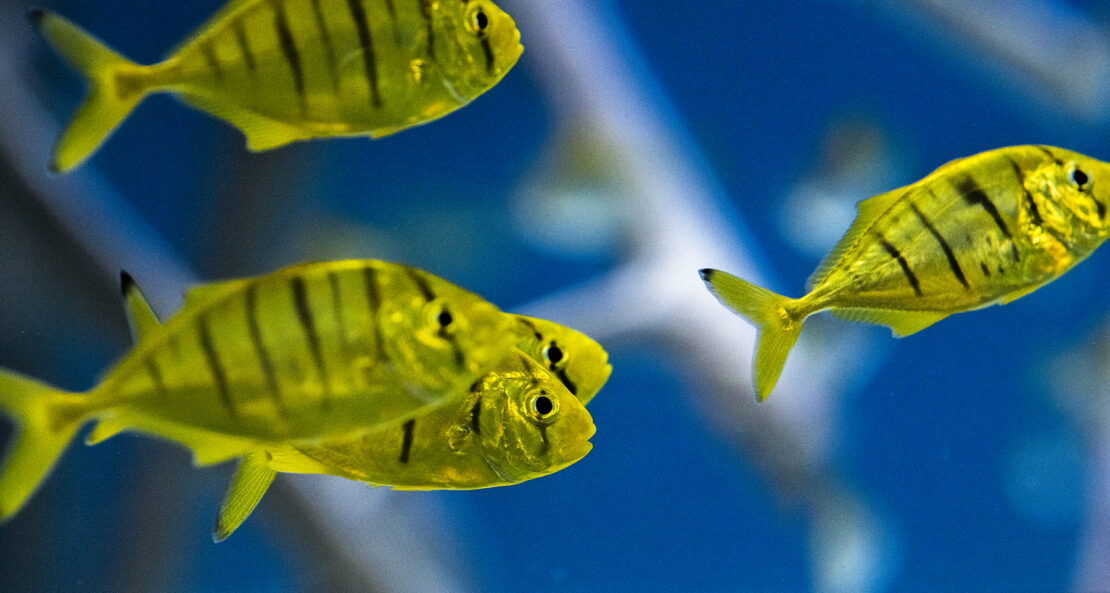 As guests walk through the exhibit, there are several interactive stations that feature puzzle games for kids. One giant wall is touch-activated with floating bubble icons that, when tapped, reveal fun facts about the baby ocean animals. There’s also a screen that plays mini-documentaries about the aquarium babies, how staff care for them, as well as environmental issues affecting babies in the ocean—such as climate change—and what you can do to make a difference.

The “tiny treasures” area features several smaller displays with windows you can peer into. The flamboyant cuttlefish there are about two months old and their color-shifting bodies measure only an inch long. Some of the exhibits feature creatures so tiny you’ll need to hunt for them, like young striped pajama squid, which looks about the size of a fingernail.

Nearing the end of the exhibit is Sally, the five-year-old California desert tortoise who, by tortoise standards, is quite lively since she’s still getting used to her new home, said Rob Mortensen who is the aquarium’s assistant curator for birds and mammals.

A 5-year-old desert tortoise, which can live up to and beyond 80 years, eats its greens for lunch. Photo by Thomas R. Cordova.

“Babies!” will be at the aquarium until April 2023, but expect the exhibition and its creatures to change as the young grow or new species are brought in. Word is the aquarium is expecting penguin chicks in the near future. 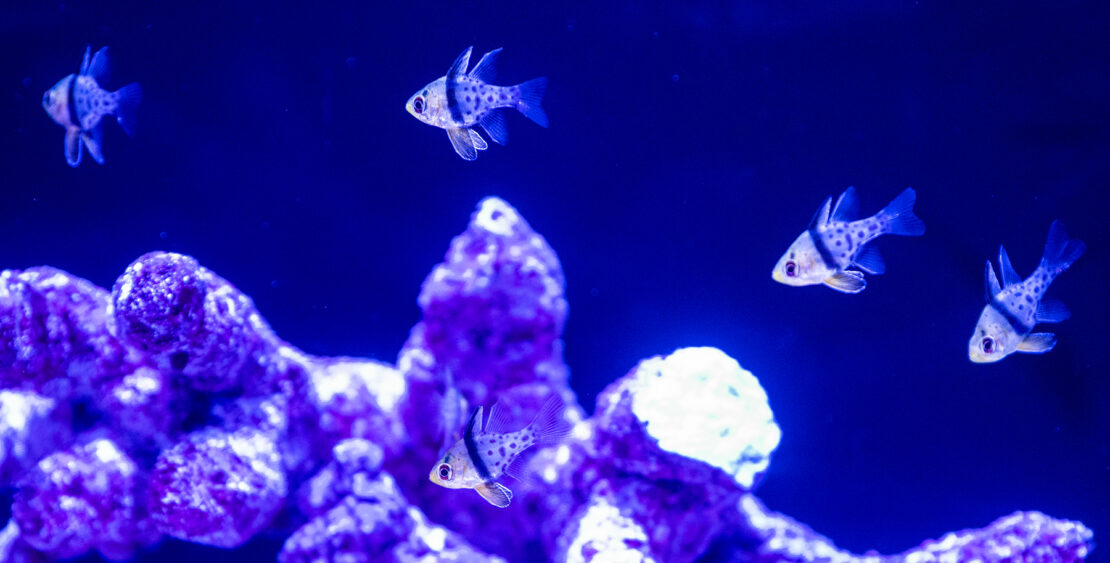 Juvenile pajama cardinalfish swim around it the Aquarium of the Pacific’s exhibit, “Babies!” Photo by Thomas R. Cordova. 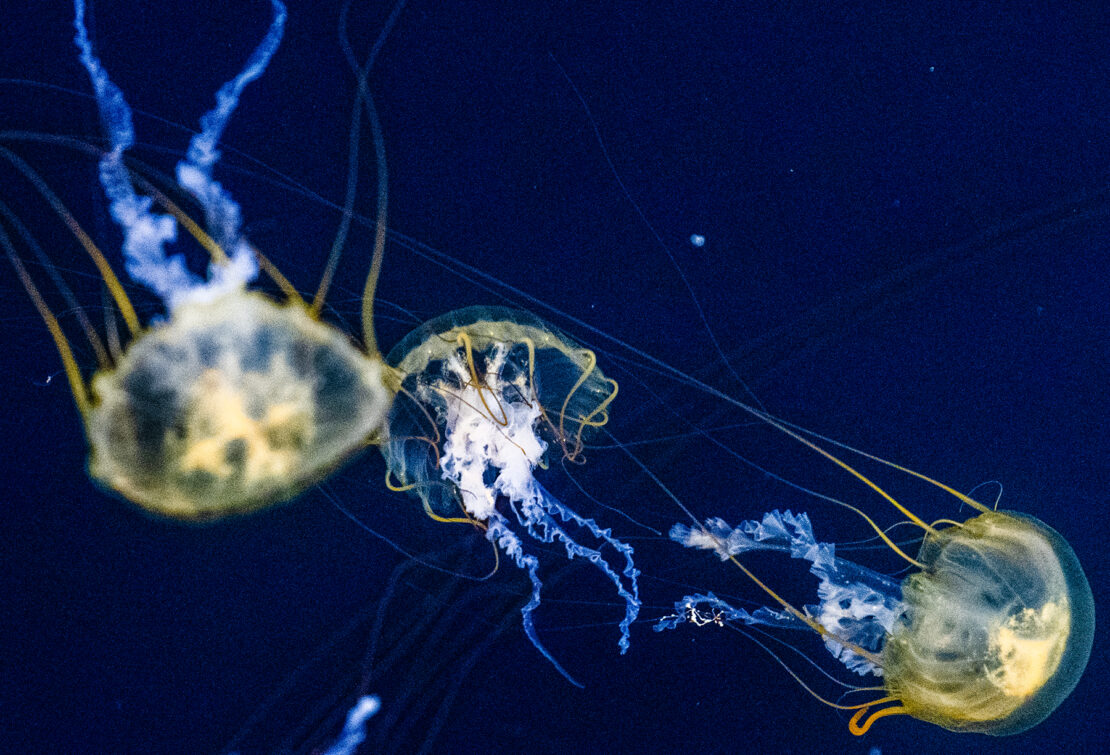 A juvenile brown-banded bamboo shark chills at the bottom of its habitat. Photo by Thomas R. Cordova. 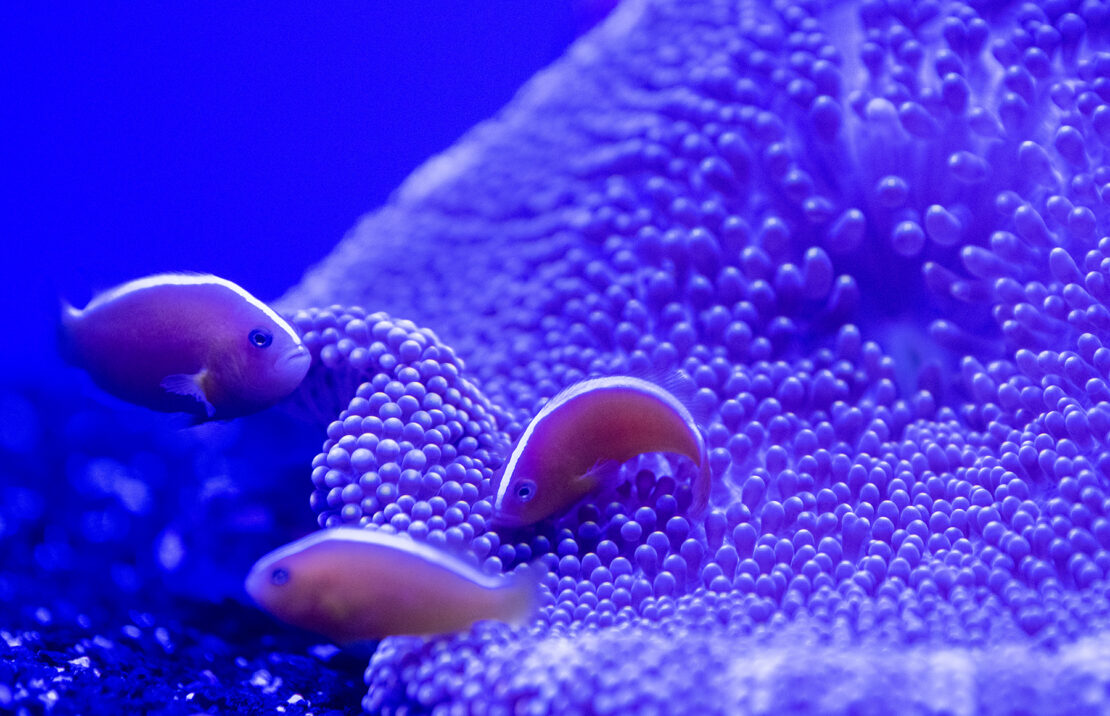 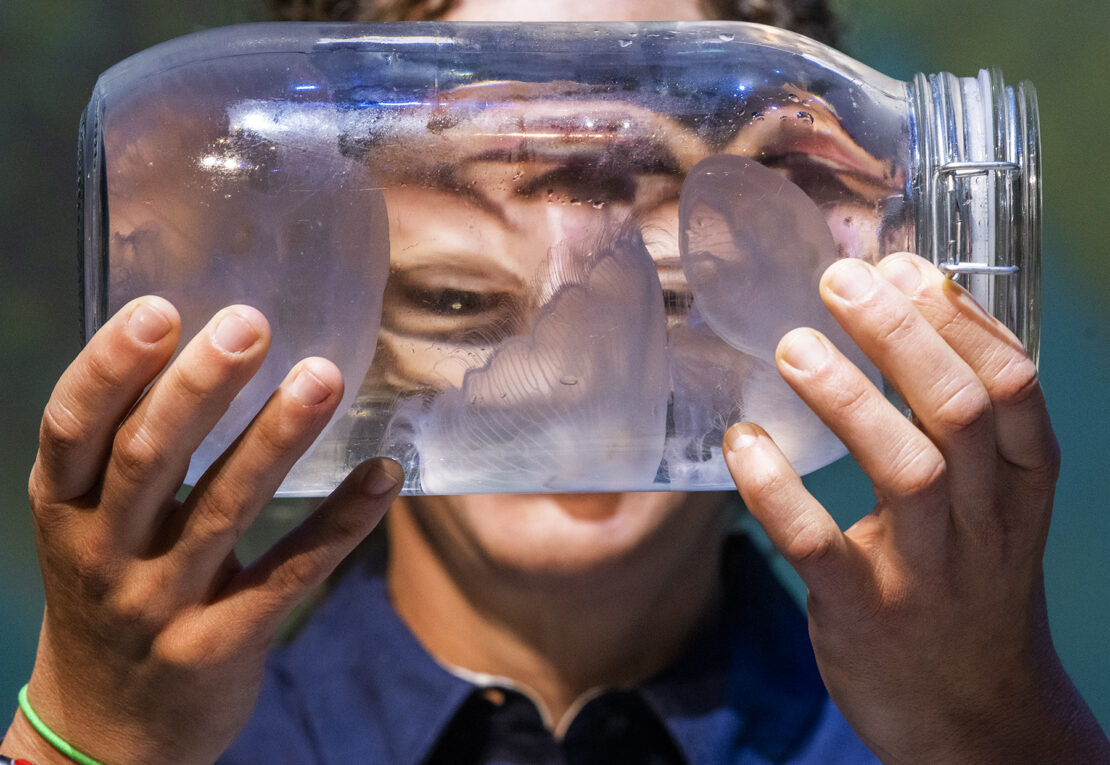 Janet Monday, of the Aquarium of the Pacific, holds a jar of baby moon jellyfish. Photo by Thomas R. Cordova.