One day after Orange County native Ferin Kidd watched the Minneapolis police murder George Floyd, he cashed out the last $400 in his bank account and bought a one-way plane ticket to the city.

He had no game plan, no strategy, just his camera and a singular determination to document the unfolding protests on the ground.

“I felt it in my heart this is what I have to do, for better or worse,” Kidd, 35, said. “I remember flying on the plane asking myself if this plane goes down and you were going to die out there, would you still be doing this? And the answer was yes.”

Kidd landed in Minneapolis on May 27, 2020. The night before, police had broken up peaceful protests with tear gas and rubber bullets. He spent the next five days filming the unrest in what would become his 45-minute documentary film, “#Bang4Change.”

The guerilla-style documentary was narrated, filmed, edited and directed by Kidd and largely follows single-mom Ashley Paulson, a fellow activist, as she attempted to rally support and care for injured protestors while also squelching the actions of those causing destruction. The final portion of the film covers a Juneteenth march, helmed by Kidd, in downtown Santa Ana that included a standoff with police.

On Thursday, July 15, nearly 300 community members, activists, entrepreneurs, legal advocates, Inland Empire elected officials and even major league baseball player Bruce Maxwell (the first MLB player to take a knee during the national anthem), turned out for the sold-out screening of “#Bang4Change” at the Art Theatre of Long Beach on Retro Row. Once the film was over, the crowd gave Kidd a standing ovation. 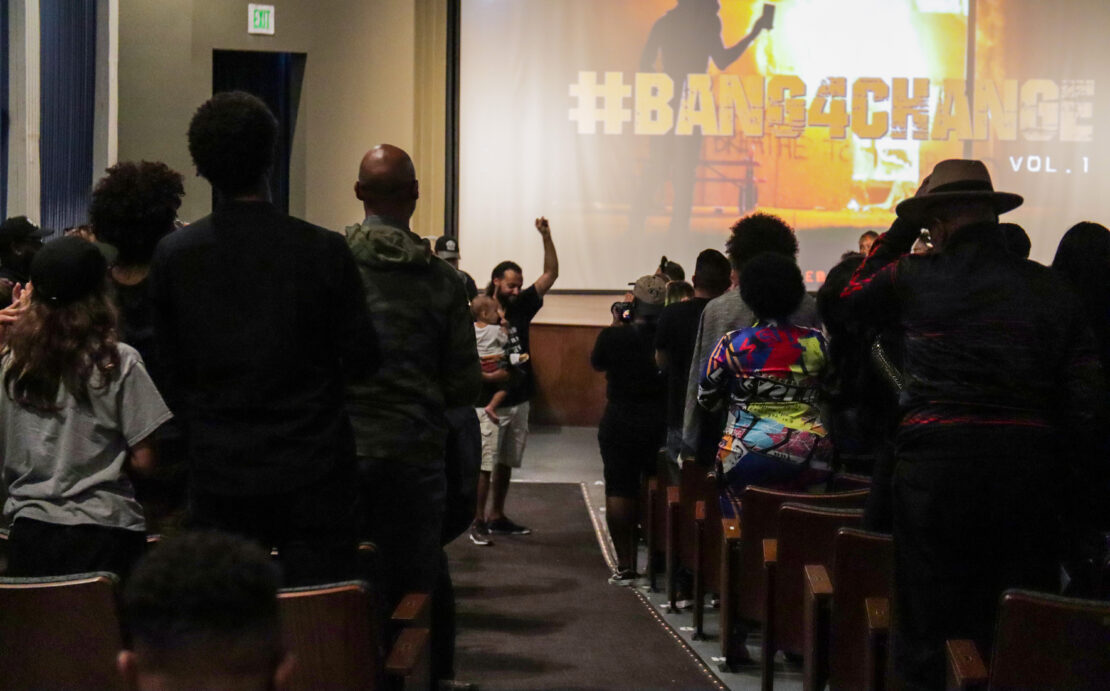 Ferin Kidd holds his son and walks up the aisle while the audience cheers after just watching the “Bang4Change” film at the Art Theatre Thursday, July 15, 2021. Photo by Cheantay Jensen.

“The only thing more powerful than this film is the audience, because this film can help change the world, but ultimately it’s you guys that got to do it,” he said on Thursday.

Since finishing the film last year, “#Bang4Change” has touched audiences in Santa Ana and Minneapolis. Kidd said he’s working on bringing the film to other states, such as New York and Texas, but progress is slow. “One of the hardest things to do is convince people,” he said.

Kidd has also reached out to George Floyd’s family, with plans to host a private screening of the film.

Admittedly, Kidd said he had never planned on making a full-length documentary; he wasn’t even sure what he would use the footage for. When he returned home from Minneapolis, his energy was pulled toward other police brutality protests and social justice movements erupting in Orange County.

“I wasn’t even sure if I had anything worthwhile,” Kidd said. “After six months, God just told me like, all right, enough waiting. It’s time now for me to show you what you were doing out there and for the world to see it.”

For two weeks Kidd holed himself up in his studio and did little else until he finished. He credits his swift turnaround to his days producing 24-hour music videos with his socially conscious hip-hop label 365 Movement, that is also connected to his company Black OC, which advocates and supports underserved communities in Orange County through arts and entrepreneurial mentorship.

Kidd said in the first two days of editing he had no idea where to start—he’d never endeavored anything on this scale— but he knew he wanted his film to be powerful, visceral and unflinchingly honest. Judging from the audience’s response in Long Beach he accomplished all of those things.

“#Bang4Change” combats an insidious narrative spun by conservative media outlets and opponents of the Black Lives Matter movement that intends to discredit the message of George Floyd protests by focusing on the looting and vandalism that occurred.

In the film, Kidd reveals the key differences between the peaceful protestors and those who had ill intentions, largely through the protagonist Ashley Paulson, who would frequently call-out or even intervene with people causing destruction.

“When we look at our protests, even here in Long Beach, it was not locals destroying Pine [Avenue],” said Renee Quarles, owner of Shades of Afrika, who attended the Art Theatre screening Thursday. “We are not gang banging. We’re not destroying the community in which we live.”

In naming his film “#Bang4Change,” Kidd said he was looking for a phrase that would act as more than just a catchy title, but as a call to action. The phrase itself comes from the song “Walk like a Warrior” by hip-hop group Dead Prez: “If you gonna bang, then bang for change, don’t bang for crazy thangs.”

“That’s a slogan that always resonated with me, if we go bang, let’s do it for change,” he said. “We fight each other over nothing, but we don’t fight against a nation that’s oppressing us.”

Kidd said “banging” is also slang in Black culture that means to speak loud and aggressively to someone being disrespectful.

“That’s what the whole world did after George Floyd, we banged for change. We stood up and we said, very aggressively, that we’re done with this,” Kidd said.

A NEW PERSPECTIVE IN LONG BEACH

Though born in Fullerton, Kidd bounced around cities in Southern California in his youth and got caught up in street crime, which landed him in Juvenile Hall at 16. On parole at 19, Kidd’s parole officers—two black women—sent him to live at a halfway house in Long Beach, believing that sending Kidd to live in an area that better represented him racially might have a positive impact on his rehabilitation.

“For the first time, when I would come outside, I didn’t feel like everybody was watching me,” he described. “I didn’t feel like people were gonna call the cops on me, which is how I feel even today in Orange County.”

Walking around the city one day, Kidd discovered the Shades of Afrika shop on the outskirts of East Village and began attending a weekly book club called the Afrikan Restoration Project (ARP). There, he discovered a new, positive perspective about what it meant to be a Black man.

“It’s about restoring the pride and dignity of who we really are our by our own writers,” said Quarles, but noted that while she might have opened up her shop for the meetings, it was the male mentors like Olua Femi Viltz who deserve credit.

“Even though I was still young, and I still had a lot of criminal in me, a lot of vices and things that I was just unable to navigate through until later in my life, the seeds that were planted in me there took root and have borne fruit, the fruit of who I am today in many respects,” Kidd said.

At 20, Kidd was sentenced to 12 years in state prison for armed robbery. He’s described that experience as the best and worst thing that could have happened to him. The worst, because he’d lost his freedom and connection to family. The best because it fueled his interest in social justice and led him to study the faith of Islam. 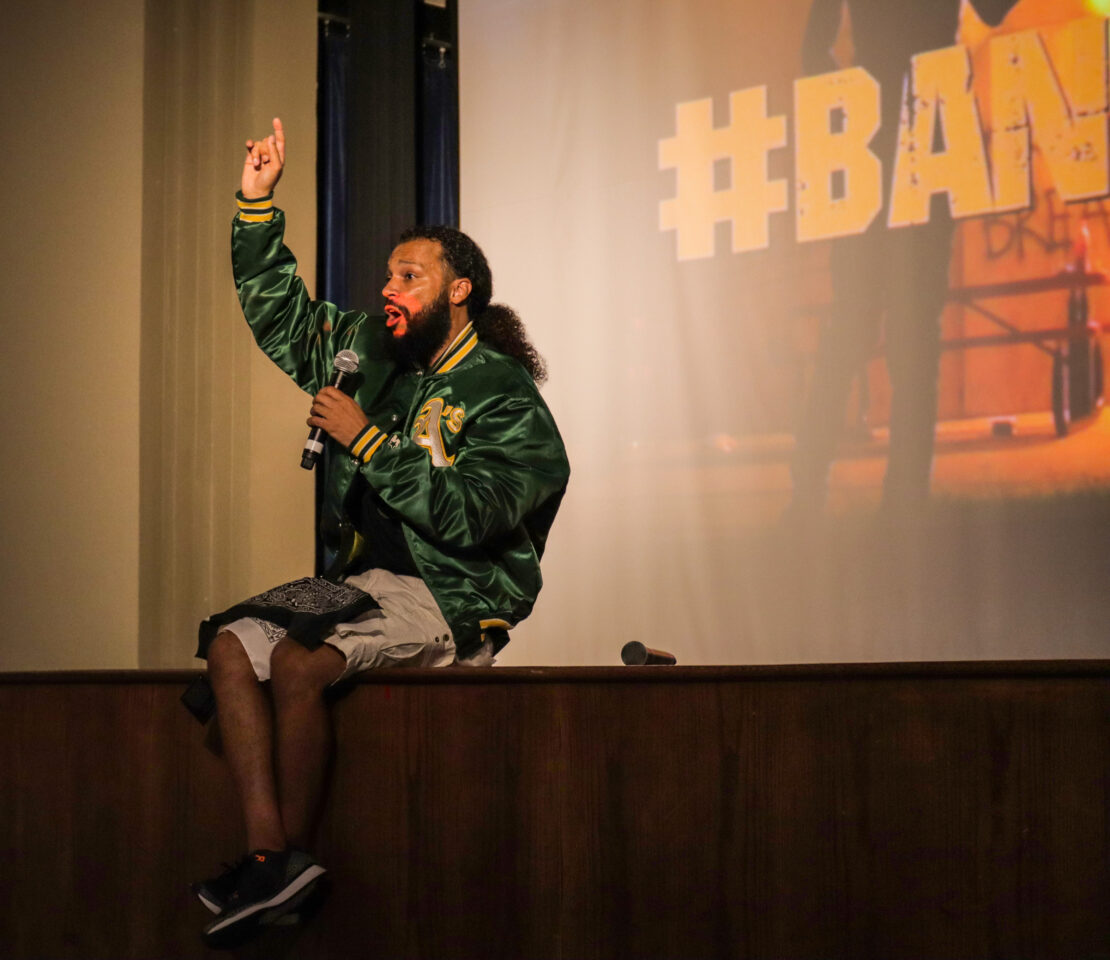 Ferin Kidd speaks with the audience at the Art Theatre Thursday, July 15, 2021. Kidd is wearing the jacket of Bruce Maxwell, the first MLB to take a knee during the national anthem, who gifted it to Kidd as a thank you for his work.

While serving time at Ironwood State Prison in Blythe, Kidd became a voracious reader. He studied criminal justice and law and worked to help reduce not only his sentence (he served only 10 of his 12-year sentence) but those of his fellow inmates.

Immediately after Kidd was released from prison, he took his $200 gate money (money every person receives after leaving prison) and invested in his company, Black OC with a plan to invest in the Black and Brown youth in his community.

Among his many forms of outreach Kidd mentors disadvantaged youth with photography, videography and entrepreneurial skills that serve as both a creative expression and a potential path toward career opportunities in adulthood. His program Shoot Cameras Not Guns has helped three students find professional freelance opportunities—including one who helped film the Art Theatre event on Thursday.

“It’s poverty, which breeds criminality,” Kidd explained of the program. “By giving them this skill, it is something that can literally, financially empower them.”

Though still in the developmental stages, Kidd said he is working toward making a “#Bang4Change” educational series that will explore Black social history in the U.S.

The first, he said will educate on the past, present and future of gang history and culture in the U.S. The second, will explore athletic activism and the intersection of politics and sports for Black athletes.

Kidd said he hopes to show “#Bang4Change” at the Art Theatre over the next few months and is currently in talks with the theater.

You can follow Ferin Kidd, “#Bang4Change” and his work with the Black OC on Instagram here, or his website, Bang4Change.org. You can also donate to the “#Bang4Change” GoFundMe, which is raising money to show the film all over the U.S.