Local DJ Tim Hampton, known musically as HAMX (previously DJ DaCapo), has spent the last three weeks behind the turntables overlooking the icy slope of Genting Snow Park on the Zhangjiakou Mountains—one of the central venues at the Beijing Winter games—laying down the sonic landscape that athletes, spectators and viewers at home hear during the global competition.

His mission is simple: Make the arena feel like one big party. Choosing the right tracks is also key to ramping up tension, or signifying to spectators, who often can’t see the entire course, when a big moment is about to happen. It requires weeks of preparation, Hampton said, and thoughtful curatorial consideration on behalf of the DJ.

“I get to see it firsthand, them coming around the bend on that final stretch,” Hampton said, describing the view from the control room by phone. “I want to make sure that I’m giving the athletes the maximum amount of energy because the more energy they have, believe it or not, the faster their times are. I’ve seen that in sports. Music is key.”

For Lindsey Jacobellis’ gold-winning women’s snowboard cross run on Feb. 9—the first 2022 Olympic gold win for the U.S.— the 36-year-old champion barreled down the slopes to the high-octane dubstep anthem “Bittersweet” by Callen. Dubstep, Hampton explained, is his go-to genre for hyping up the athletes for its aggressive tempos and syncopated rhythms.

“I try to match the music with what the field is going to be like,” the 36-year-old explained. “These are races, so high energy, pumping. I wanted as much energy as possible.” 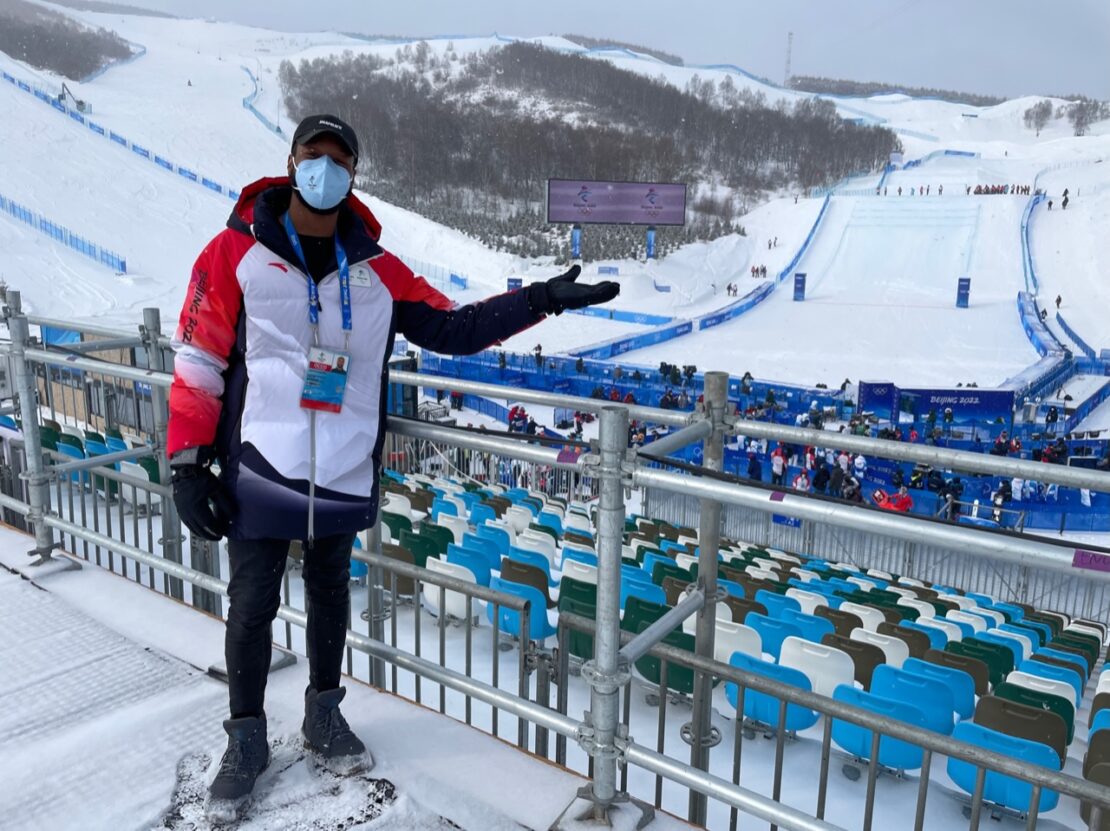 But Hampton speaks on the importance of music from experience, too. As a teenager at Mayfair High School in Lakewood, the rising basketball star relied on music to put him in the right mental headspace before big games. His quest for the perfect playlist spurred him to burn his own mixed CDs that his friends, to his surprise, started paying him for.

“That’s what kind of led me into DJing because I saw the feeling I could give people. I could make them happy or get them through some kind of moment…music did that,” he said.

When two serious injuries dashed Hampton’s athletic hopes he threw himself into DJing with the same dedication he had applied to his athletic training. Through his college years at Cal State Long Beach Hampton worked on his craft, playing at his local church and clubs. Years later he’d formalize his style and reputation creating high-energy, upbeat atmospheres that lent itself to sports arenas especially. By 2015, Hampton was the DJ for the UCLA Bruins home football games at the Rose Bowl, Clippers games at the Staples Center and LA Galaxy games at the StubHub Center in Carson.

That same year Hampton was invited to DJ the Special Olympics World Games in Los Angeles and then, the Rio Summer Olympics in 2016. Now on his third Olympics gig, Hampton’s solidified his place as a world-class DJ and enjoying every second of it.

“It’s always a different experience,” Hampton said. “It’s a different country, usually each time and the cultures are different. So it’s adapting to new foods, new smells, new people, and I absolutely love it.”

For Olympic soundtracks, Hampton said he tries to create a unique experience that is, in part, informed by the culture or atmosphere. During the Rio Olympics, Hampton favored samba beats, Jamaican dancehall and live instrumentation. In Beijing, where crowds are nominal due to COVID-19 restrictions, Hampton has focused on doling extra doses of energy, circulating hard-hitting dance beats, dubstep, and electro while also throwing in some rock-and-roll anthems from groups such as AC/DC, Red Hot Chili Peppers (his favorite band) and Sublime.

His own athletic experience also informs his decision-making.

“I want to play music that I would want to hear in those special moments that pump me up and give me that last bit of energy. Sports is momentum and so is music and they go hand in hand,” he said. “In a sense, I feel like I’m out there with them.”

Hampton hasn’t been able to explore Beijing as he had initially hoped to. Staff and athletes are only permitted to travel for work and food, but Hampton will return to Beijing in March for the Paralympic Winter Games and hopefully set foot on the Great Wall, which on this trip he’s only been able gaze at from his hotel room.

Still, Hampton said the Beijing Olympics have been full of special moments. Meeting Shaun White serendipitously on a bus ride, for one, but also connecting with the Chinese Olympic staff and locals.

“I had no idea what to expect coming in, but they’ve treated me so well here. It’s just been a beautiful experience,” he said.