When Meghan “Migzy” McGuire was a young skateboarder in her hometown of Ashland, Oregon 20 years ago, the likelihood of her finding fellow female skaters was rare.

Spotting one was something of a mystical experience, she explained, with sightings circulated by word of mouth and spoken of with reverence.  It led McGuire and her growing circle of asphalt-shredding friends to create an honorific for female skaters, referring to them as Bigfoots—women with exceptional skills that, despite the dominant cultural perspective at the time, took the sport as seriously as their male peers and generally without the recognition they deserved.

“There were so few girls skating back then that you would hear about each other through the grapevine in a mythical type of way, like the legend of Vanessa Torres in Modesto,” McGuire said. “Everyone has a Bigfoot story of hearing about Vanessa and how many stairs she could skate.”

But what started off as a term of endearment would later serve as the creative impetus behind an emerging subculture of skating and a local magazine working to support and celebrate people who embody “non-traditional skateboarding.” Bigfoot magazine defines this as skaters who are women, people of marginalized ethnicities, people with disabilities and those who identify with non-binary, trans and queer communities.

“It might sound a little misleading because skateboarding is already considered pretty non-traditional,” McGuire, Bigfoot’s editor-in-chief, said. “But it’s really about building community.”

Sometimes, you just gotta do it yourself

When McGuire, 43, began actively participating in the Oregon skate scene in the late ‘90s, she saw how underrepresented women were in the sport.  Men did and still do represent a disproportionately high share of people in the scene, but there was talent out there that wasn’t being recognized, particularly in mainstream skateboarding media like Thrasher and Big Brother, two magazines that were like “the bibles of skateboarding publishing,” McGuire explained. 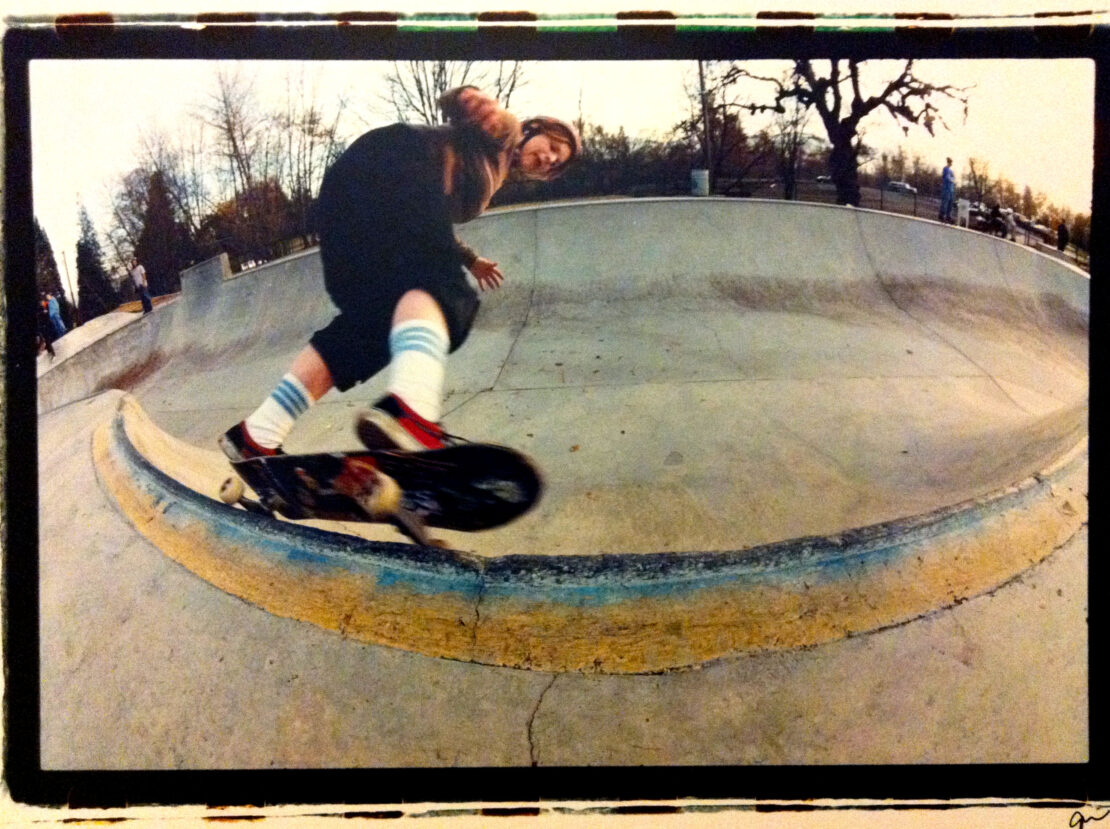 Meghan “Migzy” McGuire skating a half pipe in 2002. McGuire is the co-founder and editor-in-chief of Bigfoot, a media company and magazine that highlights women and queer, non-binary skaters and skate culture. Photo by Joy Miele, courtesy Meghan McGuire.

“It was a problem I described as the great log jam of women’s skateboarding,” she said, and especially in the Midwest, “there were no images, no media or anything like that.”

Skaters outside of the mainstream (White, cis-gendered men) have had to work hard at creating their own safe spaces to learn, grow and showcase their talents. Growing up in her small town in Oregon, McGuire remembered how harsh the skateboarding culture could be toward women—verbally, emotionally and sexually.

“It’s come a long way since then, but there are still inequities,” she said.

In the mid-2010s, skateboard culture began to experience a major shift. World champion skater and Thrasher’s “Skateboarder of the Year” recipient Brian Anderson came out as gay. A year later, Leo Baker became Nike SB’s first openly gender-queer nonbinary skater and designed the first-ever Nike skate shoe for women. And in a major win for women’s skateboarding, the International Olympic Committee approved skateboarding for the Tokyo Summer Olympics in 2020, including women’s street and park skating competitions.

“That was sort of the catalyst for getting Bigfoot (formally) started,” McGuire said. “Being on this world stage that we’d never been on before with skating being in the Olympics, it was a big opportunity for us to get the word out there and have a part in telling our story.”

“The whole community really got behind it,” McGuire said, though ultimately White was not selected for the role.

When the COVID-19 pandemic struck, much of the momentum behind Bigfoot stalled. With in-person meet-ups temporarily out of the question, McGuire set her sights on expanding the Bigfoot brand into a media company with a print publication.

“My goal was to create a magazine that was appealing to everybody,” McGuire said, but emphasized communities that have historically been excluded from the scene.

She, Caron and her team workshopped what would become the “non-traditional skateboarding” hallmark of the company, an industry term to reflect the skateboarding world’s modern cultural and social makeup.

McGuire developed an online website and moved to the Willmore neighborhood in Long Beach in 2021. By August, the first Bigfoot magazine issue was published. 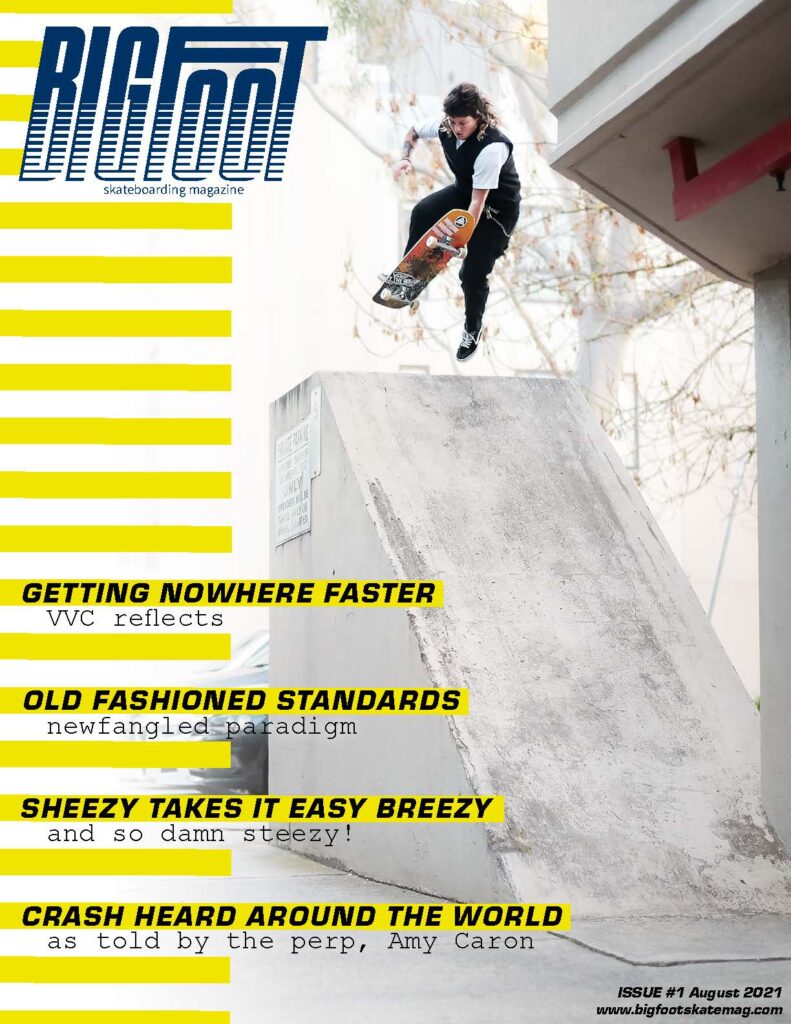 Leafing through the pages of a Bigfoot edition may evoke a sense of nostalgia for veteran skaters, especially those who read Big Brother magazine—McGuire isn’t shy about admitting her love for the publication.

“I used to read it cover to cover every time it came in my mailbox,” McGuire said.

Aesthetically, the design depicts the characteristic loud fonts, bright color schemes and photo collages that were popular in the late ‘90s and early 2000s. Bigfoot’s coverage—from profiles to Q&A’s to cultural commentaries—features the playful, informal writing style many writers like David Carnie popularized at the time, sans the sexism.

Page after page is plastered with photos of skateboarders—mostly women or gender non-conformists—mid-trick.

On the Bigfoot website are monthly Skater of the Month highlights, spotlighting “non-traditional skaters” from around the world.

But perhaps the cornerstone of Bigfoot is its social networking aspect. Online, users can browse a calendar that details various skate meetups and events around the U.S. There’s also an “Ultimate Skate Map” feature that includes locations of skate parks and other popular places to skate around the globe.

“What we’re doing with Bigfoot in the messaging and the gathering of the non-trad community under the values that we’re talking about, the conversation could have a bigger effect on the world at large, beyond skateboarding,” McGuire said.

Since launching Bigfoot four years ago, McGuire said the company has seen some promising growth. According to their website, demand for Bigfoot Issue #1 prompted the company to reprint the initial 300 copies a second time. Issue #2 circulated 900 copies and the third issue, released in January, is anticipated to increase circulation up to 2,000. Website traffic currently averages at about 20,000 hits a month, according to Bigfoot’s website.

“It’s been a lot of work since I’ve been in Long Beach, but it’s been super gratifying,” McGuire said. 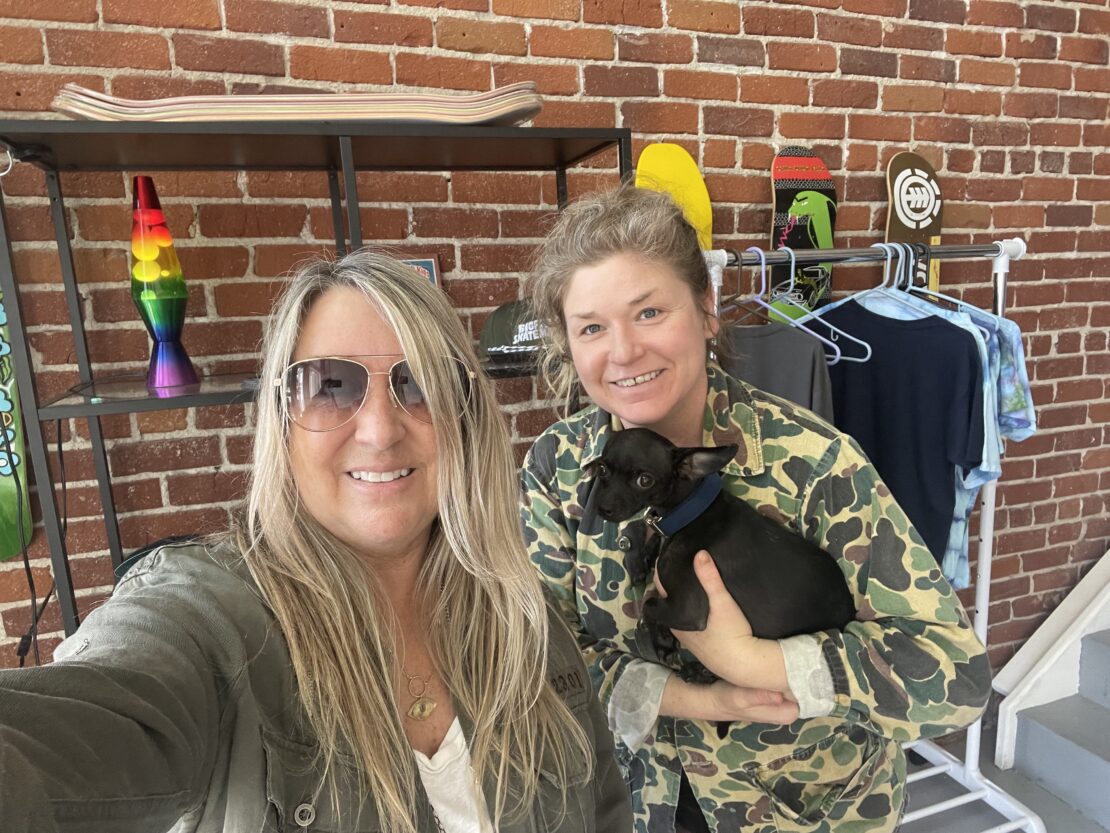 But all of Bigfoot’s efforts have come at a cost, McGuire said. Though McGuire’s career outside of skateboarding—including a photojournalism bachelor’s, local news experience and an internship at SG Magazine, a women’s surfing lifestyle publication—gave her the skills to start, nothing could have prepared her for the mayhem of running a media publishing company that includes herself and four other contributing staff.

“I’ve sort of found myself in a place where I’ve just exhausted all my resources and I need a little bit of help from the community that I’ve been working to build this whole time,” she said.

McGuire launched a GoFundMe campaign earlier this year asking for $5,000 to help the company maintain solvency. To date, the campaign has raised $3,855 of its goal.

“It was a really encouraging gesture of support from the community,” McGuire said of donors.

Those who’d like to support can also opt to purchase editions of the magazines online or buy merchandise from McGuire’s sustainable skate apparel company Curb/Cut, she said.

Though a family emergency has prompted McGuire to return to Oregon for the interim, McGuire said she’s still actively organizing skate events. One she’s excited about is the TRY.DIY West Coast tour that will promote Bigfoot’s newest edition and also “connect the non-trad community with the DIY skateboarding world,” she said. The tour will stop at three world-class DIY (skater-built) skate parks, including the Channel Street Skate Park in San Pedro. There will be a group skate and afterparty at The Good Bar in Long Beach. McGuire says the tour will happen in spring, with dates TBD.

Readers (and skaters) can keep up with all the Bigfoot happenings by following its Instagram or visiting its website.