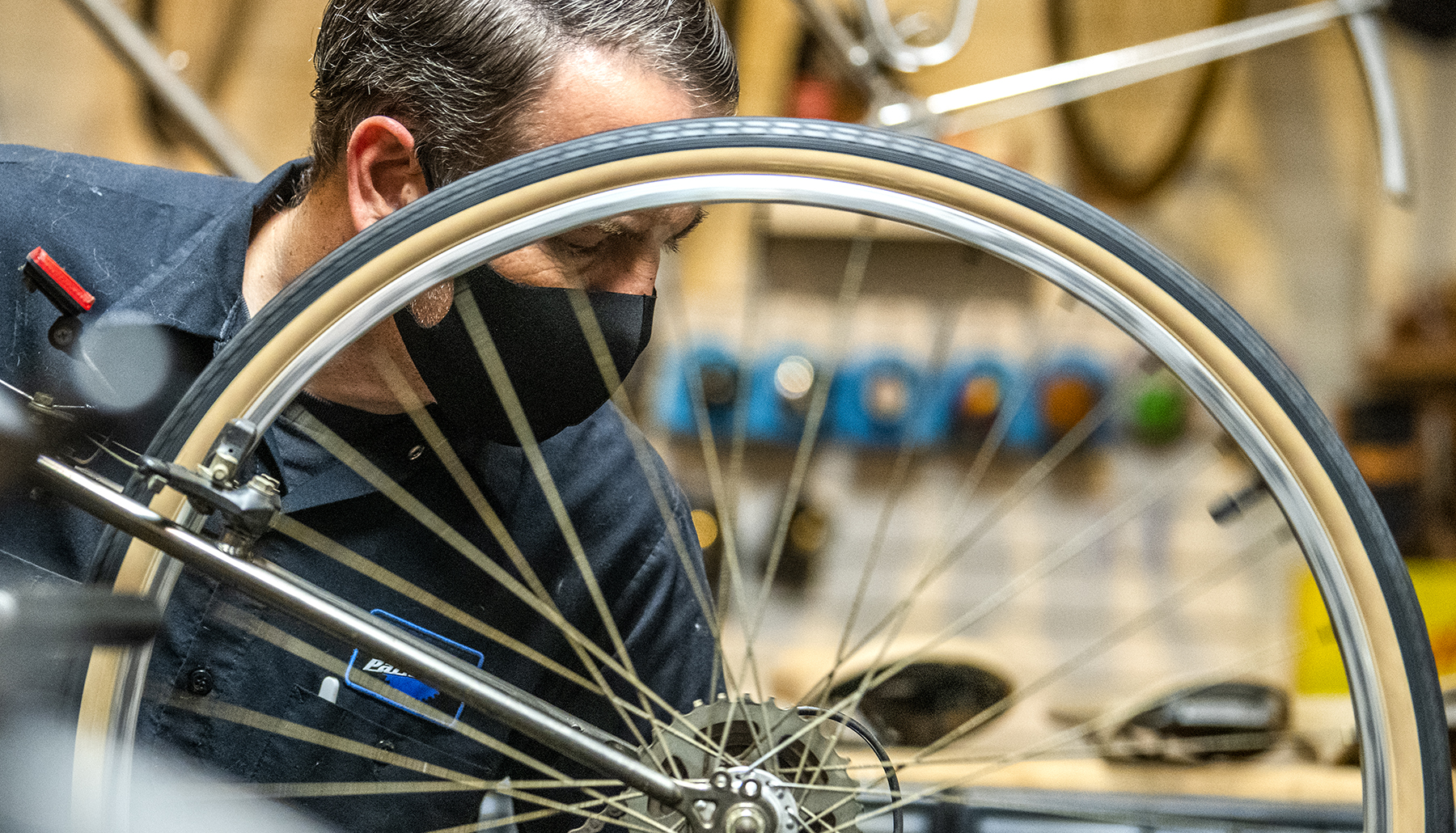 James Hricyk, mechanic, works on a rear wheel of a bike at The Bicycle Stand in Long Beach Wednesday, April 29, 2020. Photo by Thomas R. Cordova.

Bike shops in Long Beach are seeing a major influx of customers as California’s safer-at-home mandate has driven people to find solace in exercising and making essential trips safely outside, with cycling being one of the only forms of recreation not yet prohibited.

Aaron Rickel, marketing manager for Pedal Movement, a repair and rental shop in Downtown Long Beach—it’s the same company that operates the City’s bike-share program—said they’ve “absolutely” seen a greater increase in business than in years past, more than just the usual seasonal surge as the weather warms.

“We’re not alone in that, either,” Rickel said. “Even stocking inventory is difficult right now as suppliers are running low on inventory. People are seeing the importance of transportation and exercise during this time.”

Although they experienced a steep decline in business after Gov. Gavin Newsom implemented the safer-at-home order, with the bike-share program being suspended until further notice—”Business through the door pretty much flatlined for two weeks while people reacted to the pandemic”—it now feels like the opposite is taking place. While there’s only been a slight increase in bike sales, Pedal Movement staff have seen a large influx of people bringing in bikes for repairs and maintenance.

“We think people started realizing staying healthy and getting outdoors is still an important part of life,” Rickel said. “So they began pulling their old bikes out of garages and realizing they needed some work done to get them up and running.”

Pedal Movement is urging its customers to schedule appointments ahead of time, but will also serve walk-ins if availability allows. Only one customer is allowed in the shop at a time. They’ve also limited staff so they can still work and maintain social distance while working with masks on, as well as behind a plexiglass shield at the register. They’re also disinfecting every bike they service. 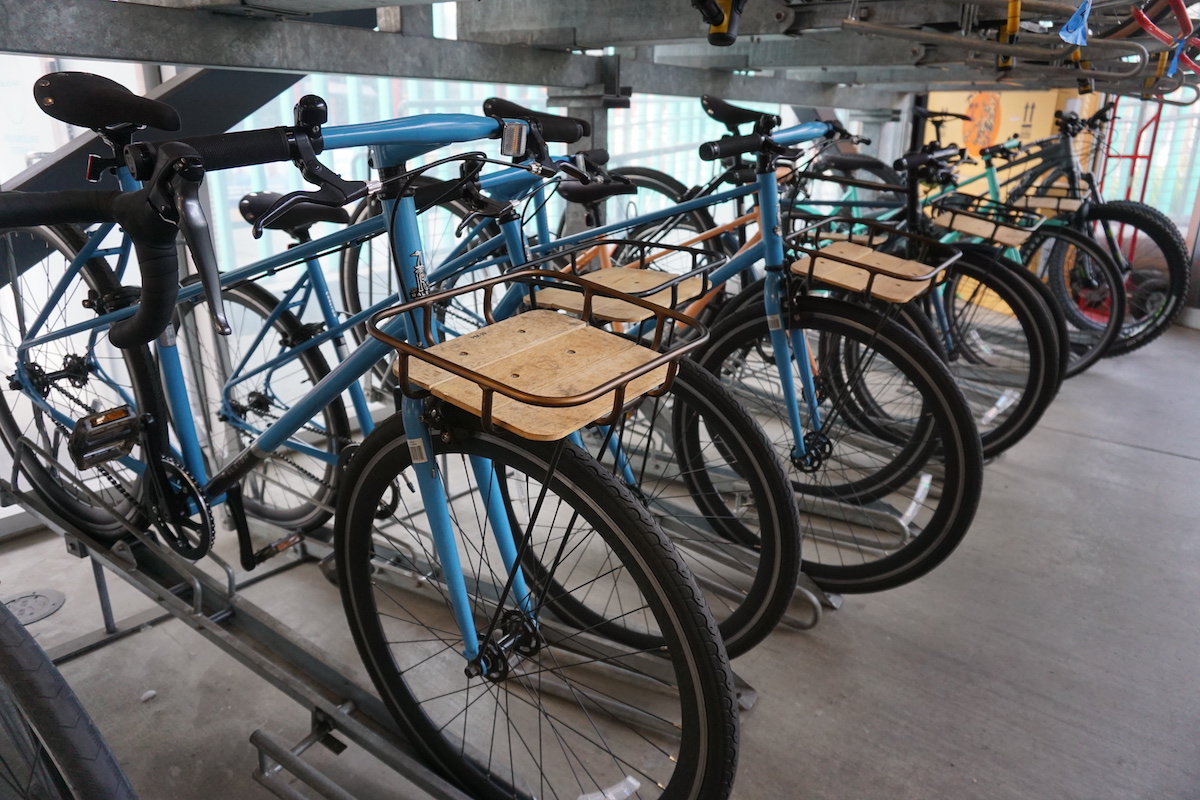 “Since trails and parks have largely closed down, there are fewer places to get outside and stay active,” Rickel said. “It’s clear that bicycles will continue to be one of the best ways to stay healthy and enjoy the outdoors safely and responsibly.”

Alongside implementing new safety measures, Pedal Movement has begun offering “contact-free” pickup and dropoff services for bike purchases and repairs, Rickel said. Staff have also moved online to offer classes on bike maintenance, live on their Instagram and Facebook pages on Tuesdays and Thursdays at 11 a.m.

“We’re hopeful this recent ‘bicycling boom’ will continue beyond the safer-at-home order and we want to support people getting on bikes as much as possible now and in the future,” Rickel said.

Propel, which was originally started in Brooklyn in 2015 and opened stores there and Long Beach as physical extensions of its mostly online presence, has largely closed its doors to in-person interaction. The e-bike retailer, a more sales-based business compared to non-motorized bike shops which are largely service-based, depends much less on walk-in traffic, so it had the option of erring on the side of utmost caution.

With a customer base that normally skews quite a bit older, founder Chris Nolte said he’s seen a recent boom of young families purchasing cargo bikes online to be able to ride with their children, more so than single-passenger bikes.

“Overall I see the trend going in a positive direction,” Nolte said. “Obviously, less cars on the road is a great benefit. People have a bigger playground to work with. I know we all hope that some of these things stick after things settle down with the coronavirus.” 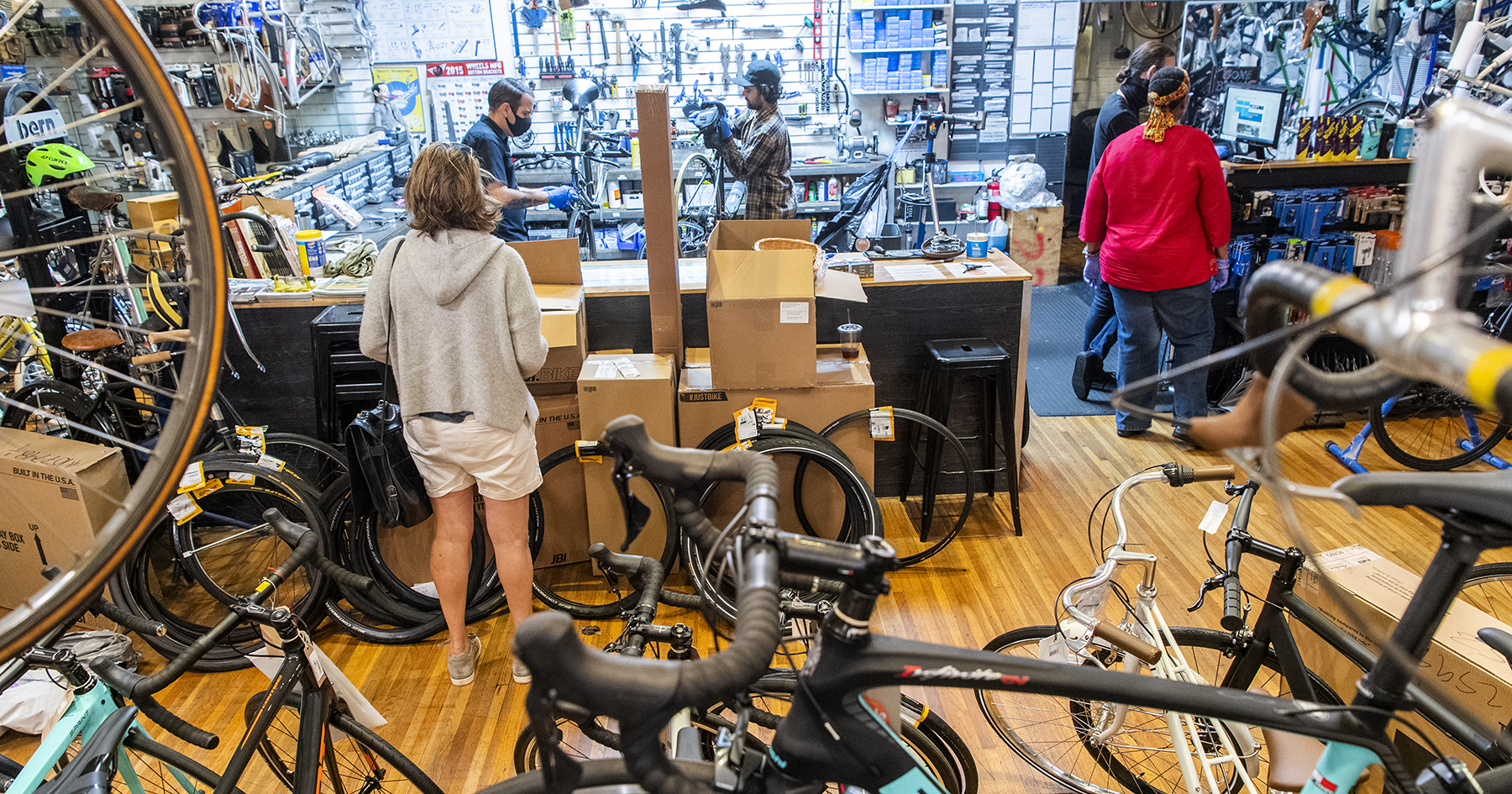 Staff and customers fill the space of The Bicycle Stand in Long Beach Wednesday, April 29, 2020. Photo by Thomas R. Cordova.

Coming from New York and seeing how Long Beach has responded to safer-at-home, with riders using one of the only modes of exercise and transportation available, Nolte said he has hope for the future in that regard, disconcerting as it is that it took a global health crisis to initiate.

Evan Whitener, owner of The Bicycle Stand, responding to an interview request on a recent Tuesday afternoon, said he was so busy that he would have to call back later that evening. The shop on Broadway is his family’s livelihood, but despite seeing an uptick in business over the past few weeks, the longtime cycling advocate said he feels conflicted. While he sees people riding bikes as a safer alternative to taking public transportation or rideshare, it doesn’t translate to the amount of people coming through the door, he said.

“I’m seeing all spectrums of people that are looking at bikes now,” Whitener said. “The first question when any person that comes in our doors is, ‘What’s the intended use?’ And people have been like, ‘Just riding around.’ We’re supposed to stay inside, but I get it. We all want to go ride around right now, I ride around, too.”

Being on the bike is one of a few ways, outside of walking and jogging, that people can exercise and make essential trips while still practicing social distancing. And with fewer cars on the road, it presents an opportunity for alternative modes of transportation to thrive.

The California Bicycle Coalition noted riding alone for exercise or essential travel is not prohibited, but emphasized that all group and club rides should be canceled. The nonprofit also warned against taking unnecessary risks and avoiding injuries that may require hospitalization in an already overtaxed health system.

“While less afflicted countries are encouraging cycling to give people an alternative to public transit, Italy and Spain have banned recreational bicycling because of the potential for injuries and the stress that can place on the health care system,” CalBike stated in March. “We don’t want that to happen, so be careful.”

Whitener, who likened the surge in more people buying and riding their bikes to the toilet paper craze, isn’t the only one. Just last week, an article on Australia’s bicycling boom from The Guardian quoted Grant Kaplan, manager of Giant Sydney, a bike shop in Sydney’s central business district, saying “We’re the new toilet paper and everyone wants a piece.” 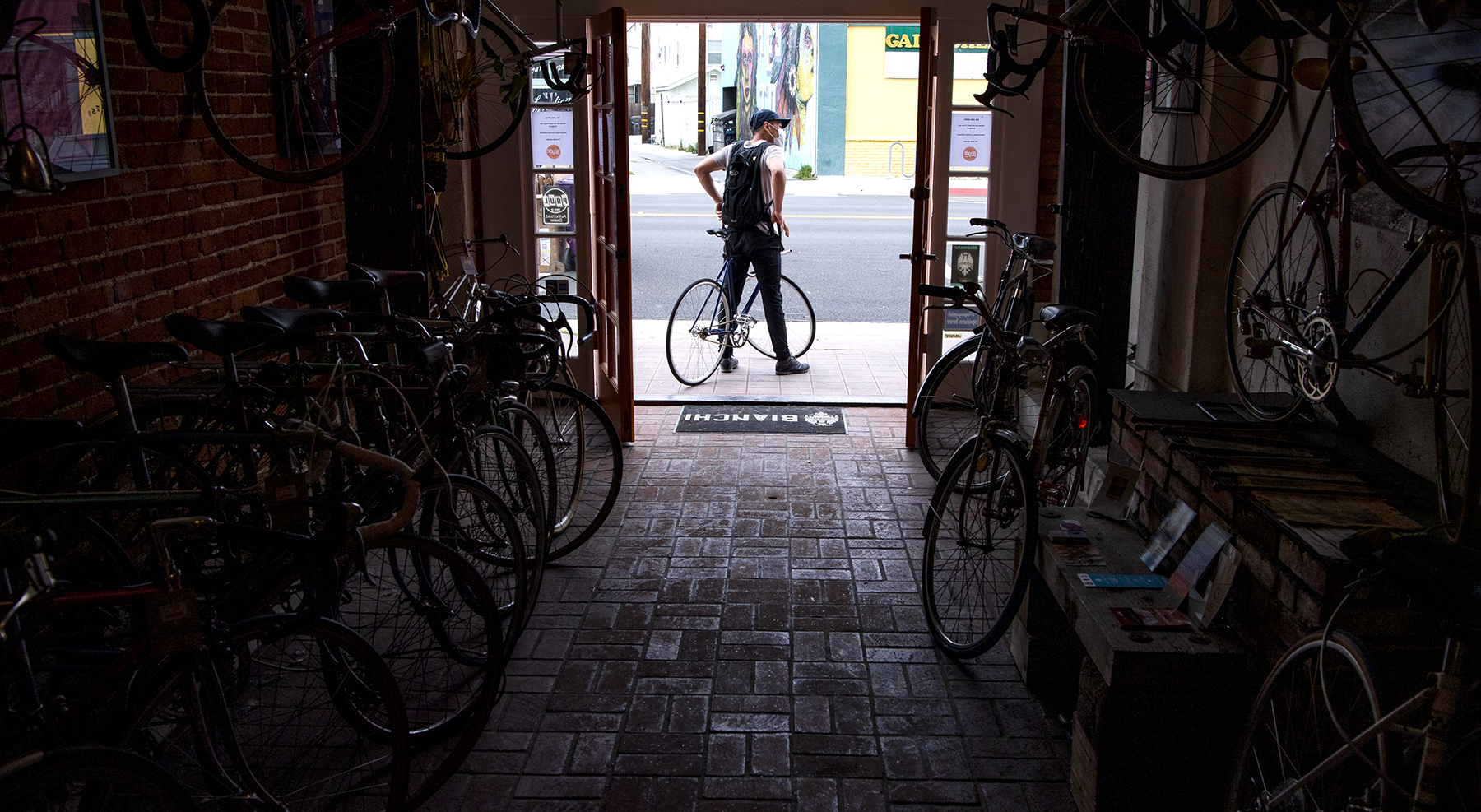 A cyclist prepares to ride after a visit to The Bicycle Stand in Long Beach Wednesday, April 29, 2020. Photo by Thomas R. Cordova.

But before bike shops were considered essential businesses, Whitener wasn’t sure if they would be able to stay open, and business was already slow at that point as people dealt with the initial impact of the pandemic. He described it as a “hold-your-breath” moment not knowing which way it was going to go, but as the safer-at-home mandate has stretched on, he and his staff started seeing more people coming in, many dragging in old bikes to the shop that hadn’t been ridden in years.

Even before there was a mandate to wear masks, Whitener’s shop required customers to wear one. Now, they only allow three people in the shop at a time and have to ask people to wait outside while their bikes are being worked on in order to maintain social distance.

“Whatever happens with the three people inside the shop is our little world for that moment,” Whitener said. “To keep those people happy and their experience enjoyable from that point on… These are new challenges, for sure.”

With more than 100 orders in for maintenance, fixes and the like and more coming in, Whitener and his staff are overwhelmed. Still, he’s thankful.

“We’re super grateful for that,” Whitener said. “Us being an essential business has been a very solid validation for the type of passion that we have for our work. We have a sense of pride in making sure that people are out and taken care of; we’re very grateful they’re coming to us.”