When Johnny Ha steps into his family-owned donut shop, Angel Food Donuts on an “early day,” he’s through the door at 1 a.m.

“It takes time to prep everything,” he explained. “And we’re baking pretty much until close.”

The flux of business at the donut shop always called for the early hours; it isn’t unusual for the shop to sell out of stock by early afternoon. Nor is it unusual to see lines of cars queued down the street, hoping they didn’t arrive too late to snag a chocolate bar—a popular item.

But these are not usual times.

Well over a month into stay-at-home orders, many of the essential businesses that have remained open have all seen a major decline in their business. Paul Ha, Johnny’s father and the owner of Angel Food Donuts for 18 years, says he’s seen a 35% to 40% drop in sales in the past month.

“There’s been a steady flow, and we’ve actually sold out in the past few days,” Johnny said. “Ever since that post showed up, everyone’s been coming together. We’re really grateful to the community.”

What Johnny refers to is a Facebook post created by local Alex Gomez. He asked the community to help support Angel Food Donuts, fearing the beloved shop would not survive COVID-19 stay-at-home orders. 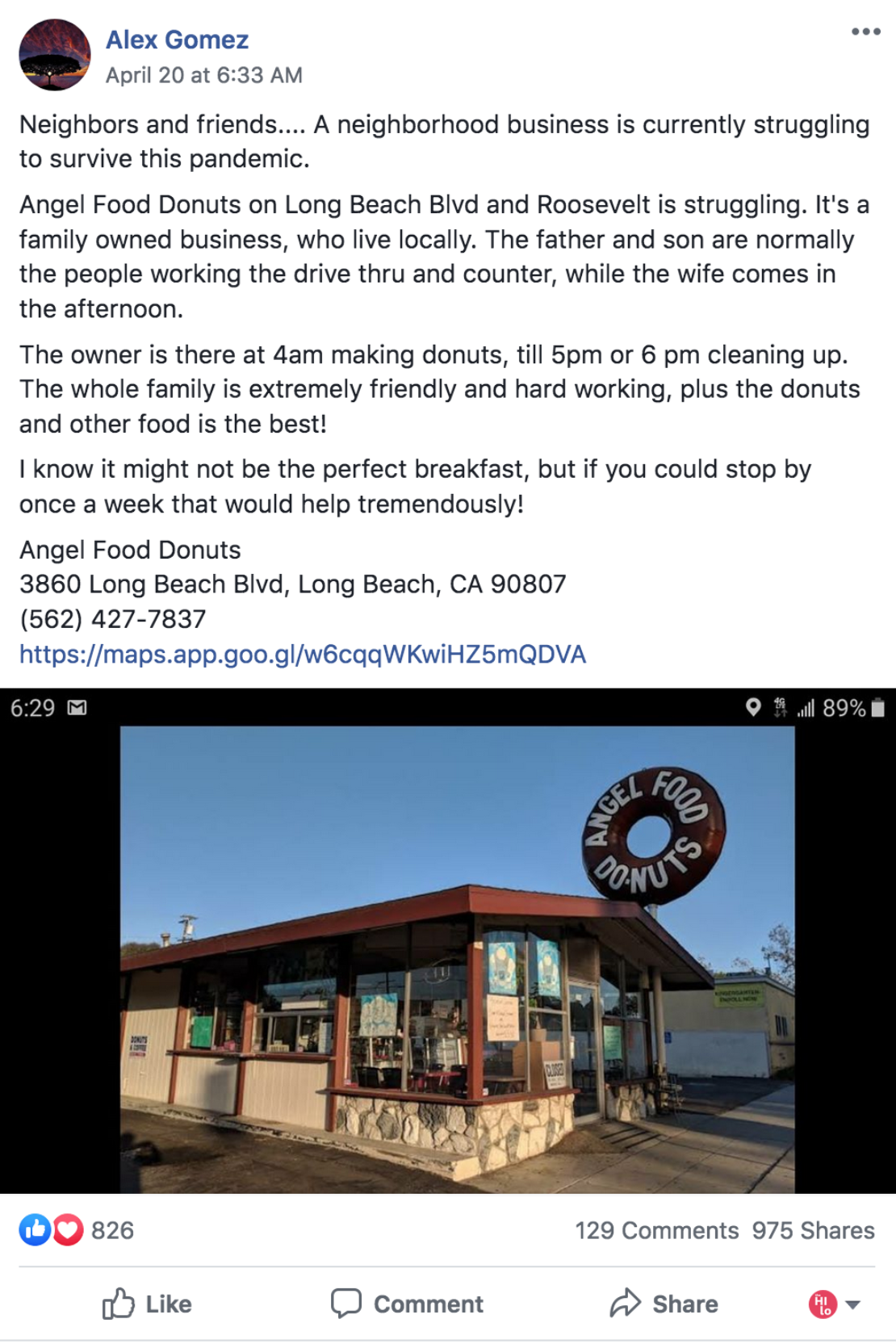 “The response was overwhelming,” said Blair Cohn, Executive Director of the Bixby Knolls Business Improvement Association. “I came here just in the last few days to drop off some stickers, and the lines of the cars on both sides was backed up down the street.”

Of those who waited in the drive-thru queue at Angel Food Donuts on Wednesday, April 22, many admitted they had seen the post on social media, not just on Facebook, but on other platforms such as Nextdoor.

“I saw the post to help small businesses” said Su Choe-Garvey, a Bixby Knolls resident. In her 25 years living in Long Beach, she’d admitted she’d never visited Angel Food Donuts before, but wanted to help. “I’ve been supporting the Better Half Boutique and I don’t normally shop there either. In this crisis, I fear for small businesses.”

The Bixby Knolls Business Improvement Association (BKBIA) has steadily worked to help support and bolster business for its many local restaurants and retailers. Efforts such as Small Business Saturdays, turntable nights and neighborhood bike rides are all examples of the many methods used to get people out shopping, locally. But in a COVID-19 reality, executive director Blair Cohn says the organization and residents have had to take things a step further.

In addition to social media posts calling on the community to spend their money in the neighborhood, the BKBIA has teamed up with the businesses, offering special deals and sponsoring giveaways in hopes that with just a little more incentive, people will shop. Cohn says it’s working and he’s not surprised.

“There are people that have been living here for 60 years,” Cohn explained. “The neighborhood pride here is huge and people are paying attention.”