Time is running out for Mimi Masher, whose heart, soul and rent money are paying to keep a rare, banked roller derby track in storage while she tries to find a proper space for it.

Whether that’s someone’s two-car garage or the 28,000-square-foot warehouse Masher has her sights set on—where the track could actually be assembled and rolled upon—is up to anyone willing to swoop in with $40K. That money would give her a seat at the negotiating table with a chance to turn her dream into a reality: creating a roller derby and roller sports destination in Long Beach for participants, fans, locals and tourists.

“I think it would be a really great way to legitimize the roller derby sport in the city and bring the magic back that we had at the dome,” said Masher.

She’s referring to the Spruce Goose dome next to the Queen Mary where the women of the local derby scene held banked and flat track bouts. Talking about those days, Masher’s excitement is palpable; she grins at the very thought of bringing that energy back.

“The banked track games were out of sight. We would sell out every time. They were pin up-y, campy…”

For those who aren’t familiar with Masher and her Technicolor hairdo, it’s safe to say she’s been making Long Beach more roller skating-friendly for years.

Besides managing Bayshore Rink Party, renting out the outdoor rink in Belmont Shore for roller skaters to enjoy once a week, she is a longtime junior roller derby coach through Long Beach Junior Roller Derby (which merged with Beach Cities Shark Bites) and recently announced she’s starting a program called Down for Derby, a program that teaches kids and adults with Down Syndrome to play the sport.

With Masher, it seems every month it’s something new, from the “Glove Boat” ocean trash cleanups she started with a friend earlier this year, tackling the arguably hopeless task of scooping plastics and more—shoes, seat cushions, boxing gloves—out of Long Beach waters, to starting her own home organization business and, recently, throwing out the idea of opening a roller skating museum.

Her goals aren’t entirely altruistic but are methods to make ends meet while also contributing something positive to the community. She’s constantly hitting the ground running with one idea after another, and while this attitude can be both a blessing and a curse, Masher has always found her way to the bright side, though it hasn’t always been simple.

In 2006, before she found joy on eight wheels, Masher was helping young girls to find it on four through the skateboard company Silly Girl Skateboards—which began as Silly Girl Design. At the same time, she said, she was in the throes of a rocky relationship.

“I stayed not only because he made it very hard to leave, but also because I was afraid to lose my company,” said Masher. Eventually, she says, she chose divorce and left Silly Girl.

Resigned to the fact that her best life was over, a reconnection with her former high school sweetheart, Sean Laughlin, showed her otherwise. Laughlin, whose motorcycle club had partnered with Long Beach Roller Derby, bought Masher her first pair of adult roller skates and the rest is, well, history still in the making.

“Roller derby and roller skating welcomed me with open arms,” Masher said. “And, I enjoyed it. There wasn’t the sense of ego that you find in skateboarding, it was girlier and had a feeling of acceptance… Slowly, through that league, I started to become whole, started to become myself.”

Moving Past Bad Blood, Ladies of the Long Beach Derby Scene Unite in the Name of Skates

“I guess I gravitate toward things with wheels and kids,” she said. “I like to help kids find themselves and feel good about themselves, teaching them something they didn’t think they could do.”

Which is one of the reasons why finding a space for the banked track is so important to her. It’s not just roller derby, it’s the scene, the opportunity to teach people something new—from workout classes for moms, programs for youth, training for athletes—plus a spectator sport for all to enjoy.

Originally purchased from Orange County Roller Derby by John Molina, founding partner of community-investment partnership Pacific6, the parent company of the Long Beach Post, the track and what happens to it is now up to Masher, who recently began paying the fees to keep it in storage.

“This isn’t just my thing,” she said. “This is for everyone.”

Masher opens the roll-up door to reveal the Kitten Traxx track disassembled in organized piles of railings and platforms in a dark storage unit near the edge of the city.

One of only 15 made in the U.S., at first glance it does not look to be worth about $20K, but following six or more hours of assembly, a laborious puzzle of connecting numbered parts (it takes at least six people to move each track flat, and about three truckloads to transport) the design allows derby participants to skate in a fast, safe environment.

And, once built, it just looks cool. Daydreams of whipping around the track, Ellen Page-like come easily. But it’s been sitting in storage for six years, albeit set up a few times by leagues who have rented it. Masher has been looking for a building to house it for the last four.

One of the Kitten Traxx being used by the Arizona Derby Dames in 2010. Courtesy James Jones.

The track was built by Oliver Ghalebi, a SpaceX engineer and referee for Orange County Roller Girls, but the design was created by a former film set sculptor, James Jones, who was a part of the L.A. Derby Dolls as a referee for about a decade. Starting in 2004, when they were using a much older, outdated track, he said he witnessed even the most skilled athletes succumbing to bodily harm, from busted lips to broken ribs. So he came up with a new design, which included modifications to the handrails, the infield lip and uprights to prevent injuries.

“I was witnessing many great skaters getting hurt and wanted to make the tracks safer to skate on,” Jones said. “These old tracks hadn’t been updated since they were first built in the 30s and 40s.”

The name Kitten Traxx comes from Jones’ derby handle, “Bitchy Kitten.” How he got that name is another story—something about whining cats—but fast forward to Jones having left the sport over seven years ago. His skates have long been hung up and he’s now a senior project manager for Los Angeles-based design practice Ball-Nogues Studio, though he still thinks fondly of his derby days. 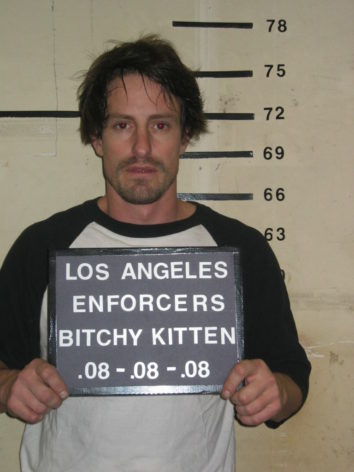 “I definitely do still like to hear that the tracks are being loved and used,” said Jones. “In storage isn’t what I made them for. Maybe a cool part for me is that when I’m really old… people will still be discovering them as new to them.”

Now, Masher said she’s using everything she has to show the owners of the building that she’s not a gamble, that this is something that will not only benefit the city, but make it proud.

Her first offer on the former tile manufacturing warehouse in the industrial area cornered by Anaheim Street and Magnolia Avenue was too low, so she’s in the process of resubmitting, as the building—a vast, echoey space with just enough square footage, fire exits and parking for a roller sports venue—remains on the verge of being sold to someone, anyone else.

“My reasoning for staying as close to Downtown Long Beach as possible is we can bring in tourism,” she said. “We’ll be relying heavily on rotating tourism from the cruise ship terminal and convention center, and staying in Downtown helps with transportation. The farther we get away from the hub of the city, the harder it is to get people there.”

She admits it’s a lofty goal, but having the venue—Masher is calling it SoCalSkateSpace, for now— open and running by February, coincides with another factor, a certain blockbuster film expected to open that month.

The track, her track, appears in that film, said Masher, and she’s hoping to catch some of that fandom and excitement, similar to when “Whip It,” with Ellen Page, came out in 2009 and leagues across the country experienced an influx of derby participants. Masher wants to be ready for the expected resurgence.

“Long Beach Roller Derby was my first taste of roller derby and a part of my life I’ll hold dear forever. It’s a beautiful sport, an absolute joy to watch.”

If not Long Beach, there may be another opportunity to set up the track in Wilmington, but Masher’s hoping to keep the Long Beach Banked Track right here at home. So far, 26 people have given a total of $905 to her Gofundme. She’s asking for the aforementioned $40K to be able to show she has proof of funds.

Although Kitten Traxx designer Jones says he’s long been out of touch with the derby scene, he’s glad his tracks still bring joy to those that use them. This is Masher’s last big push to make that happen locally.

“One gives everything to derby,” Jones said. “And by the end of your time, someone else is taking it further.”