For the last decade, Chris Graue has made a career out of making bands look good.

His aptitude for narrative and flair as a music video director and cinematographer have landed him credits with some of the biggest names in the ska and punk scenes, directing fan favorite videos for Reel Big Fish, NOFX and We Are the Union.

Now, the 34-year-old director and Long Beach newcomer is staking his place in the ska scene—with a little help from the many friends he picked up along the way.

“I’ve been trying to put a ska band together since I was in middle school and nobody ever wanted to do that,” Graue explained. “So I finally broke down and was like, you know what, I’m going to do it myself. So, I’ll get all my friends in ska bands….to come guest with my band and it’ll be fun and not traumatic, like being in a band.”

Under his solo project, Lo(u)ser (searchable on YouTube and Spotify as Louser), Graue released earlier this year a rollicking four-track ska EP, “Super Gwario Kart” that features brass, drums and vocals from members of Reel Big Fish, Suburban Legends and We Are the Union.

What’s more, Graue produced a music video for each song on the album that includes cameos from the featured artists, offering fans a fresh glimpse of the musicians (some now semi-retired) who made the early aughts SoCal ska scene so distinct.

Characteristically upbeat, “No Hope” takes a playful page on feelings of defeat, of coming to terms with one’s own shortcomings and failures and all with a dose of existential humor. The lyrics are embodied by visuals of death, or “end game” screens from 36 different, 90s-era Super Nintendo video games—from Mario Bros to Star Fox to Street Fighter—with Graue and members superimposed as the iconic video game characters.

“I’m a big fan of it (video games) and a lot of it speaks to me,” Graue said by phone, earlier admitting he was multitasking during the interview troubleshooting a Gameboy camera—the same camera he used to film the video to the song “Things Are Getting Worse” with original Suburban Legend’s member Vince Walker.

The bulk of “No Hope” was planning, Graue said, pinning down which end game screens he could recreate with the help of green screens and Photoshop manipulation. Then it was a couple days of shooting, mainly by himself, some with Klopfenstein.

The cameos of Barrett and Steen were done remotely. Graue sent Barrett, who lives in Florida, a green screen to film in front of. Regan’s five-second appearance was accomplished by an impromptu pit stop by Liberation Brewing Co. one afternoon, Graue said. It wasn’t too big an ask; all he needed was Regan to open and close his mouth for a few seconds (if you don’t know what we’re talking about, just go watch the video already).

Post-production took about a day, Graue said, and required a fair application of superimposition, Photoshop finessing, some color correction—nothing he hadn’t done before.

The “Nope Hope” video was released as a lead-up to a show headlining Klopfenstein and friends at Chain Reaction Oct. 29. Graue, who opened the show as the red-suspendered Mario from Super Mario Bros., said it was a particularly special concert, a full-circle moment of sorts for the video director.

Suburban Legends’ first headlining concert was at Chain Reaction 20 years ago, it had also happened to be the first live concert Graue had ever been to—the show that had cemented his love for ska.

Walker, who was Suburban Legend’s original trumpet player, and later lead vocalist, came on stage to perform their single together on Graue’s EP, “Things Are Getting Worse.”

“My first show with my solo project and the first show I ever saw, same stage, same person. So yeah, I’ve been around forever,” Graue said. 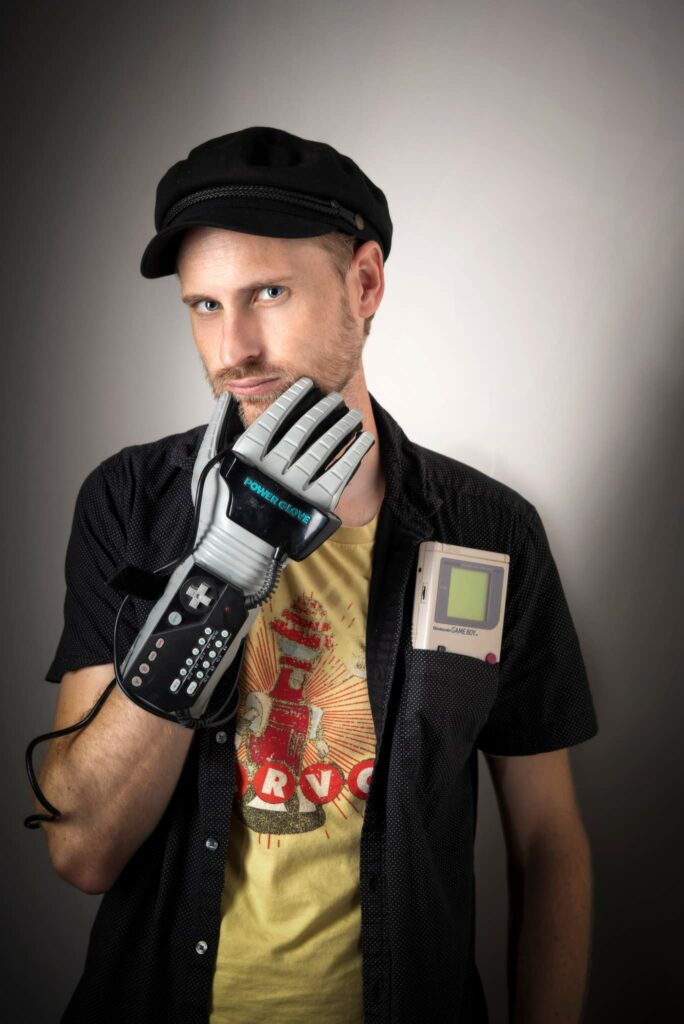 A need in the scene

By the time Graue, who grew up in Torrance, was a young 20-something in the mid-2000s his weekends were dedicated to raging at ska shows, hands fisted, elbows swinging, legs skip-stepping in the centrifuge of a swirling skank pit.

He was a fanatic of the scene and craved to find his own chain-link to it. Problem was, none of his friends wanted to be in a ska band and he wasn’t all too swell at playing brass instruments—Graue was more adept with guitar and keys, earning him member credits with bands The Maxies, the 131ers and Pizza Wolf.

Still, when Graue got wind that Suburban Legends was looking for a new trumpet player, he pounced.

He didn’t get the gig, but the audition video he filmed and edited struck a chord with the seven-piece group and they asked if he’d make video content for them, culminating in his first official music video for their song “Open Your Eyes” released in 2009.

“And everybody saw it and was like, wait a second, why do Suburban Legends have a good-looking video, did they suddenly get major label support or something?” Graue recalled. “The need that I identified early on, was that ska and punk bands don’t have good music videos. Some of them do, I’m not saying everyone is bad at it, but they don’t have the budget.”

And for Graue, who had been making quirky, comical videos and other content (even a stint producing “weird skits” for public access TV) since he was 15, said he found it remarkably simple to do. All the bands were really lacking was a clear story or theme, and someone behind the camera who actually knew what they were doing.

Graue carried on making videos for the group including some of Suburban Legend’s most-viewed videos, Disney covers “Kiss the Girl” and “You’ve Got a Friend in Me” (those songs a nod to the band’s formative years playing shows at Disneyland Resort) and videos for artists like The Bombpops, Gentlemen Prefer Blood and his own band, The 131ers.

Making content for these groups landed him touring gigs and backstage access with the artists. It was riotously fun, exciting, and even allowed him his dream to play trumpet sporadically with Suburban Legends on a UK tour and some SoCal gigs. 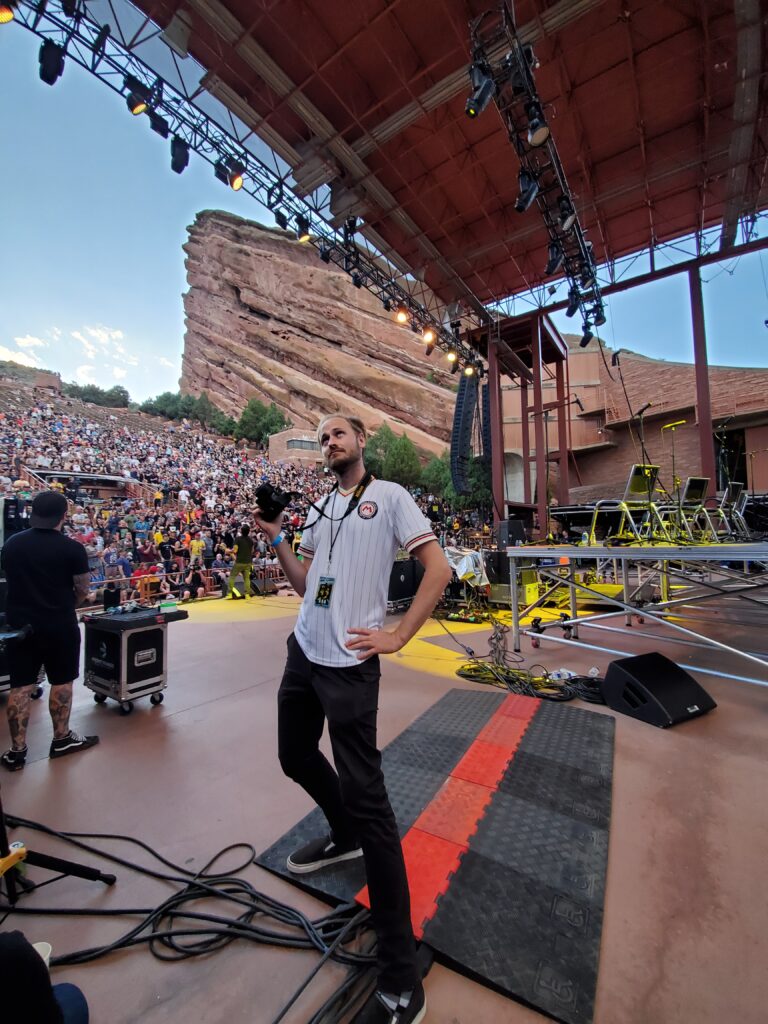 But life as a music video director was long, and rarely lucrative and in 2013 he nearly called it quits.

Late night after a show with his band Pizza Wolf, Graue discovered his car had been broken into. All his camera gear was stolen.

“I just took that as a sign that I was done being a music video guy because honestly, it wasn’t working out great anyway, I was super poor all the time. But the scene kind of said no,” Graue said.

Scores of bands he’d befriended came together and threw a two-day benefit concert for Graue. The money helped him buy back all the gear he still uses today.

Back with a vengeance, Graue kept making videos, making friends in more lofty places that landed him work with Reel Big Fish, Goldfinger, and NOFX. Graue directed NOFX’s “I Love You More Than I Hate Me,” that clocks at over 2 million plays today.

“I’ve always been somebody that’s willing to help,” Graue said. “The work was at least good enough. And they liked me enough to keep working with me.”

Now nestled in Long Beach since September, Graue is steadily working on his own music while also making videos for his ever-growing circle. His work in the last 20 months alone includes almost 40 videos for artists Bad Cop/Bad Cop, Catbite, Bite Me Bambi, NOFX and We Are the Union.

Through it all, Graue remains grateful to the scene and the friends he’s made along the way.

“I’ve been just around everybody for so long. I’m fortunate enough to get these really awesome guest appearances,” Graue said. “Really lucky to have all these friends.”