After just a year and a half since launching her artisan bakery in San Pedro, Long Beach-born baker Kristin Colazas-Rodriguez is set to open her second shop, Colossus Bread + Coffee, in Belmont Shore Friday, April 16.

Taking over what was formerly the Italian restaurant La Strada, Colossus’ new space is nearly double the size of the 700-square-foot locale in San Pedro, one notable new feature being a conventional bread oven—something the first location lacked the size and electrical requirements to install.

It’s a production boon for the popular bakery, which has seen an increase in demand through the pandemic, and will allow Rodriguez to not only supply her San Pedro store with all its artisan, made-from-scratch breads and pastries, but expand their menu offerings as well.

“If anything, our demand went up [through the pandemic],” Colazas-Rodriguez said. “Our space wasn’t set up for COVID, so my goal was to give us a little more scale, space and equipment so that we could keep producing and do it more safely and sustainably.” 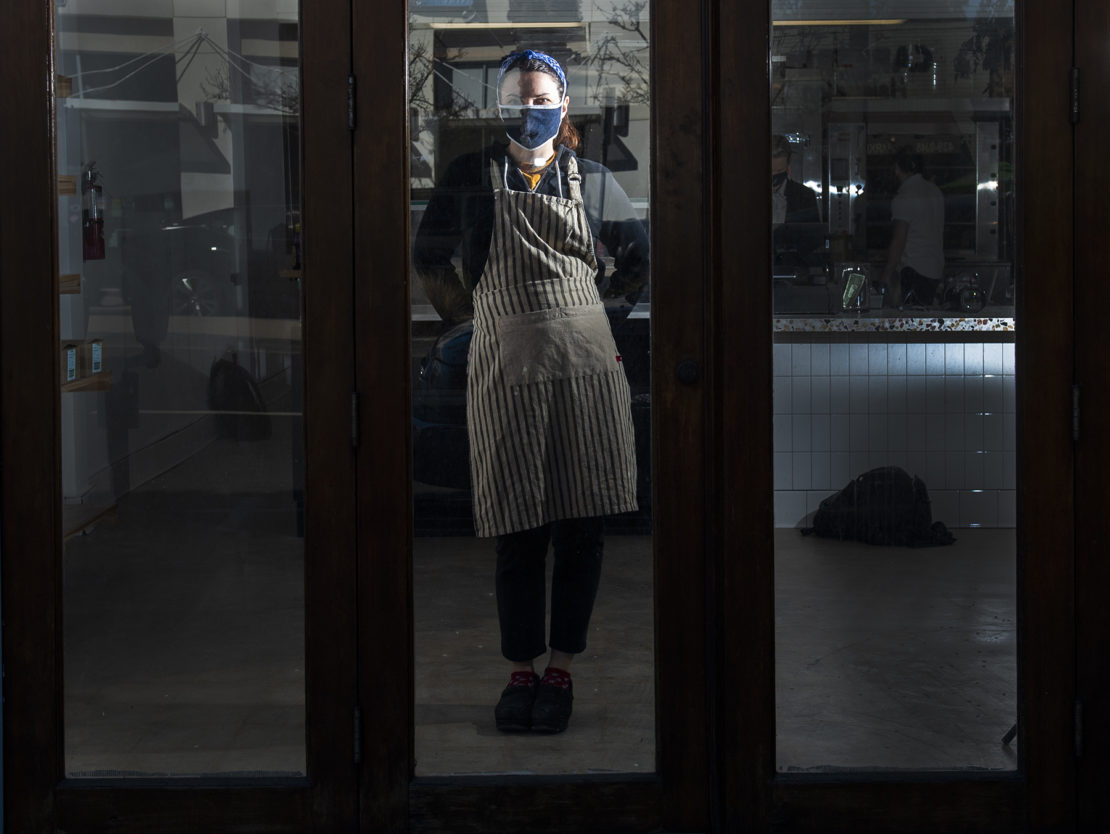 Kristin Rodriguez, owner and pastry chef, looks out through the folding doors of Colossus Bakery which opens a new shop on Second Street in Long Beach Friday, April 16, 2021. Photo by Thomas R. Cordova.

Using fresh, locally sourced ingredients, Colossus specializes in wholegrain and sourdough breads, handmade croissants and laminated fruit pastries fashioned in French and European traditions, but with a California twist, Colazas-Rodriguez said. This experimentation is most evident, she said, with their fruit pastries, the rotating fruit toppings and fillings dependent on what’s in season.

Now, the 29-year-old baker looks forward to upping the bread ante, bringing in more carbs of all shapes and sizes, from ciabatta roles to baguettes—much of which guests will be able to see produced in real time with the building’s open kitchen concept.

“All of the baking is going to be taking place behind the counter,” Colazas-Rodriguez explained. “So, you’re going to be able to see all of our bakers shaping and baking bread. And, you’ll be able to smell all the fresh bread and pastries.”

The new Belmont Shore location will feature an expanded selection of “grab-n-go” items such as granolas, the popular ricotta toast and breakfast sandwiches, as well as an additional, specialty food menu crafted by Primal Alchemy’s executive chef Jeff Paletz. Colazas-Rodriguez and Paletez’s connection harkens back to the baker’s cottage business days, when she would rent out the kitchen at Primal Alchemy to bake her loaves and pastries at night to sell at farmer’s markets during the day. 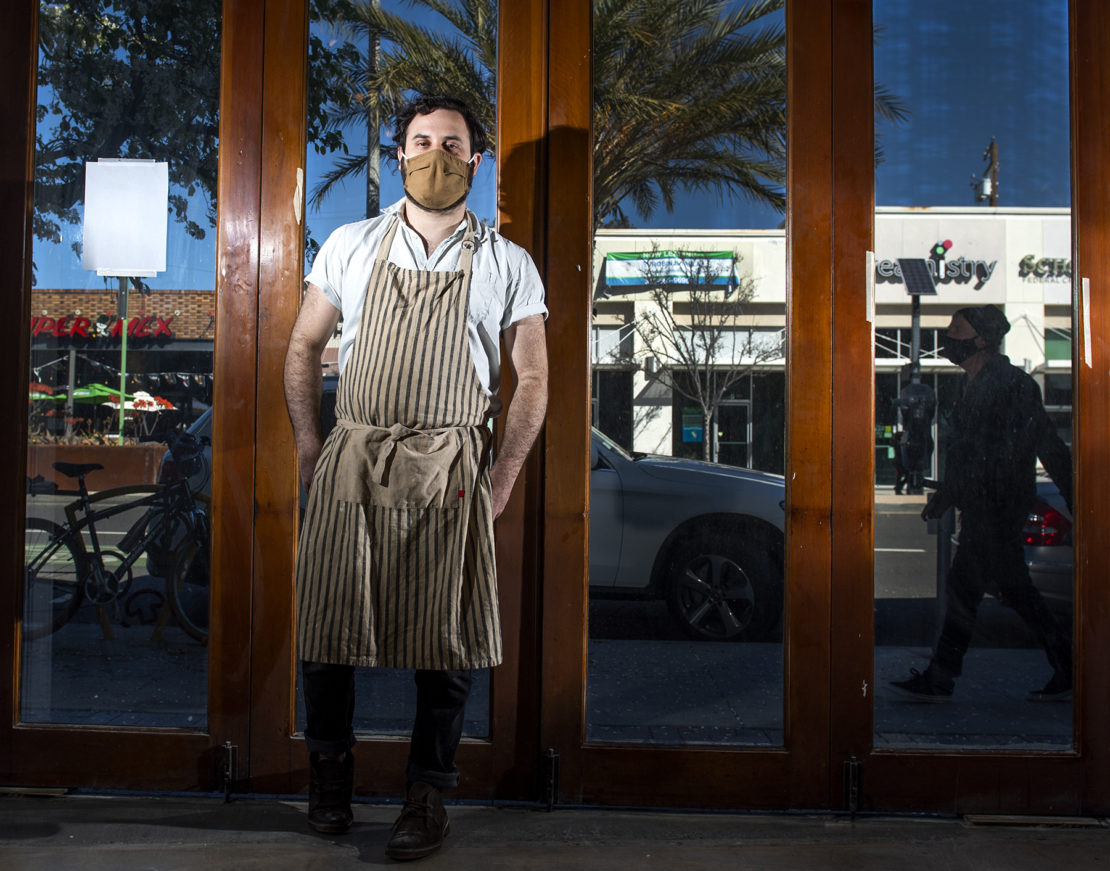 Jeff Paletz, chef de cuisine, by the folding doorway at the new Colossus Bakery which they will open on Second Street in Long Beach Friday, April 16, 2021. Photo by Thomas R. Cordova.

French bistro-inspired hot and cold sandwiches, toasts, quiches, granolas and other cuisine will be the bulk of the menu until the store can start incorporating pizza, French toast and other themed food events when COVID-19 restrictions ease up, Colazas-Rodriguez said. The menu will be rotating as produce and other ingredients will be sourced largely from local farmers markets.

Kristin Colazas-Rodriguez’s husband, Nick Rodriguez, will also be reaping the rewards of a bigger space. Now the store boasts a full espresso bar with an expanded coffee program by way of his Glendora-based roastery, Penny Coffee Roasters. Pro-tip: make sure to ask what drinks pair best with which food or pastry as they’ve designed the coffee selection to complement each other. 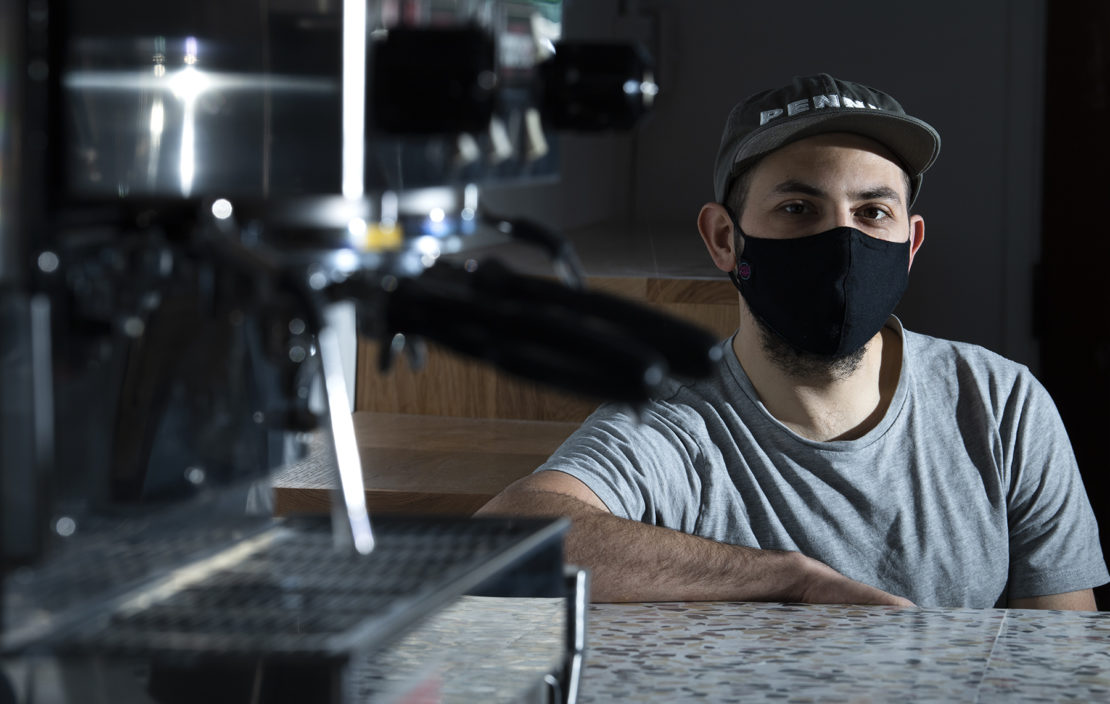 Nick Rodriguez pauses by the barista machine at the new Colossus Bakery which they will open on Second Street in Long Beach Friday, April 16, 2021. Photo by Thomas R. Cordova.

After a dragged-out dance with the city’s health department to get the final green light to open shop (they had originally anticipated opening in February) Colazas-Rodriguez and her partners are elated to finally open their store this Friday. Doors open at 8 a.m.