From the soccer field to the volleyball court to the embroidery machine, the Paulson twins are inseparable. Danielle and Natalie Paulson are both standout athletes at Millikan High School who also happen to run an emerging clothing brand on Instagram.

It’s called cozmicwaste, and it’s advocating for a different approach to fashion. While Natalie and Danielle design and stitch their own products, their brand began as a source of thrifted, secondhand clothing.

“We first started our account by just selling clothes from our own closet, because we’ve kind of always had a little bit of a shopping addiction,” Natalie joked. “We can’t always just keep taking money from our parents and we weren’t old enough to get regular jobs, so we decided to sell clothes on different selling apps. But then we found this bursting community on Instagram.”

As they continued posting and selling their old clothing, they started to cultivate a following. A hundred followers turned into 1,000, then 10,000 within six months. For the past two years, the Paulsons have been discovering and re-selling pieces, establishing a market for secondhand clothing in the digital world. 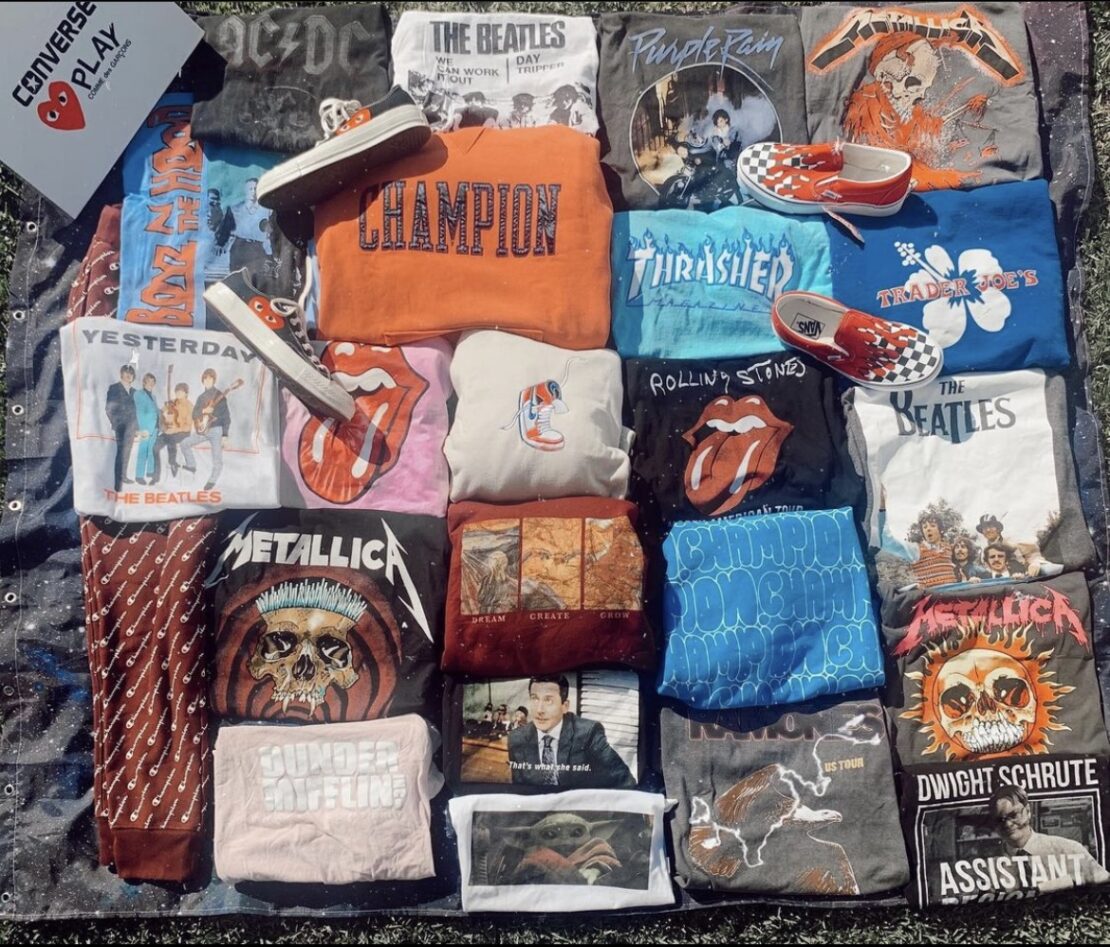 The Paulson twins’ cozmicwaste clothing brand started with secondhand fashion and then grew into pieces they created themselves. Photo courtesy the Paulson twins.

“Once we started to gain more followers, it kind of raised awareness around thrifting,” explained Danielle, who credits her grandma for sparking the twins’ interest in thrift stores. “I feel like before, especially before COVID, there was kind of a stigma around thrifting and secondhand clothing. But we found beauty in it because you’re able to recycle the fashion and actually make people want to buy that kind of stuff instead of buying from fashion stores.”

Cozmicwaste has positioned itself as an antidote to “fast fashion”—a booming industry of cheap, mass-produced clothing often marketed and sold on social media. Brands like Shein and Fashion Nova each have more than 20 million followers on Instagram but have faced questions about their labor practices and criticism about using low-quality materials that could be harmful to consumers and the planet.

Natalie said she and her sister are trying to inform their peers about those issues and provide a different path forward: “As we’re spreading awareness around thrifting and more people are into finding vintage clothes, it’s all-around better for the environment.”

Another perk of thrifting is finding rare and unique items. Especially as twins, it’s understandable that Natalie and Danielle would seek out clothing that shows off their individuality and helps them to express themselves.

“Instead of having to try and find the best new items and new brands, you’re finding the beauty in something that’s different,” Natalie said. “It might be super old, but it’s also super unique and that’s what sets us apart from each other.”

The Paulsons have dedicated a solid chunk of their free time to building their brand, but that can be hard to come by. The twins are two-sport athletes at Millikan, who also play club in both soccer and volleyball, leaving them “in season” practically year-round. After finishing all their homework on Fridays, they find time between games on the weekends to work on thrifting and embroidery.

The twins admitted they often turn down opportunities to spend time with friends in order to focus their attention on the business. They even invested in a top-end embroidery machine so they could speed up production time and put out higher-quality products. That may seem like a major sacrifice to the average teenager but not to the Paulsons.

“We obviously are busy, but we want to actually do this,” Natalie said. “A lot of people have jobs where they don’t find any joy in it or they don’t have any motivation towards it, and I think that’s the main drive for us to keep posting on our account.”

As high school seniors exploring their options for college, the Paulsons will soon need to figure out the future of cozmicwaste. They’ve both been in contact with a few colleges about continuing their soccer careers at the next level, but they’re not sure where that might happen or if they’ll be able to run the business out of their dorm rooms.

One thing they do know is that with the recent changes to the NCAA’s Name, Image and Likeness (NIL) rules, they’ll be allowed to pursue their business without having their college eligibility revoked. This gives them the option to pursue multiple interests once they get to college, as students, athletes, and entrepreneurs.

“We’re excited because it just gives us more options,” Danielle said of the changes to the NIL rules, which went into effect this season. “I feel like it gives us more of a chance to fulfill all possibilities that we want to pursue. They say that these are the most important years of your life, so I think being able to have these different options is really important for us. And even if we decide we don’t want to do it anymore, we get to make that decision and it’s not being made for us.”

In the meantime, the Paulsons will look to guide Millikan girls’ soccer to a fourth consecutive Moore League championship. They’re both team captains and—you guessed it—play right alongside each other as leaders of the Millikan defense.

And if things go as planned this season, they certainly won’t need any help putting those patches on their letterman jackets.