Maricar Cruz’s entry into costume making was more about necessity than pleasure, though these days it’s quite the opposite for the 35-year-old Long Beach designer.

Cruz took an interest in skating when she was seven years old. Showing talent and promise in the sport, she soon started competing and had her sights set on the Olympics. But the cool sport came with an expensive price tag.

Private lessons, entrance fees, pricey skates. Not to mention the costumes. Ranging from about $100-$300 on the more modest side, Cruz’s single-parent household could hardly justify the cost of a new outfit for each performance. So, her mother got crafty.

Cruz would design the costumes based on whatever song she would be performing to and then she and her mother would make them.

“Little by little I just took over,” Cruz said. “And eventually I was better than her at it.”

By age 11, Cruz was making all of her elaborate competition costumes from home, spending every free minute outside of school and training to bring her designs to life.

“I was very much focused on making my costumes creative and different, to stand out because you’re judged on your appearance, not just your performance.”

By 12, Cruz had reached the juvenile level, the fourth-highest skill level before senior, or Olympic level. But a back injury that year forced Cruz to give up her dream.

“My whole life was consumed by figure skating, so when skating stopped, I had to find something else to take my mind off skating,” she said. “I think that’s when I kind of buried myself into these ideas of costumes.”

But when Cruz gave up figure skating, she also gave up her identity as an athlete, she said.

“I just didn’t want to do anything physical… it just reminded me of skating. I couldn’t look at anything the same,” she said.

It wasn’t until she was 26 that she discovered aerial acrobatics, the interest inspired after seeing Pink in concert, flying above the crowd during a particularly daring show.

“I finally had a sport again,” she said.

Though life took Cruz in a variety of directions, a corporate job, a move to Los Angeles from her home in Torrance, then Long Beach in 2015, costumes were always a constant, especially during Halloween season. 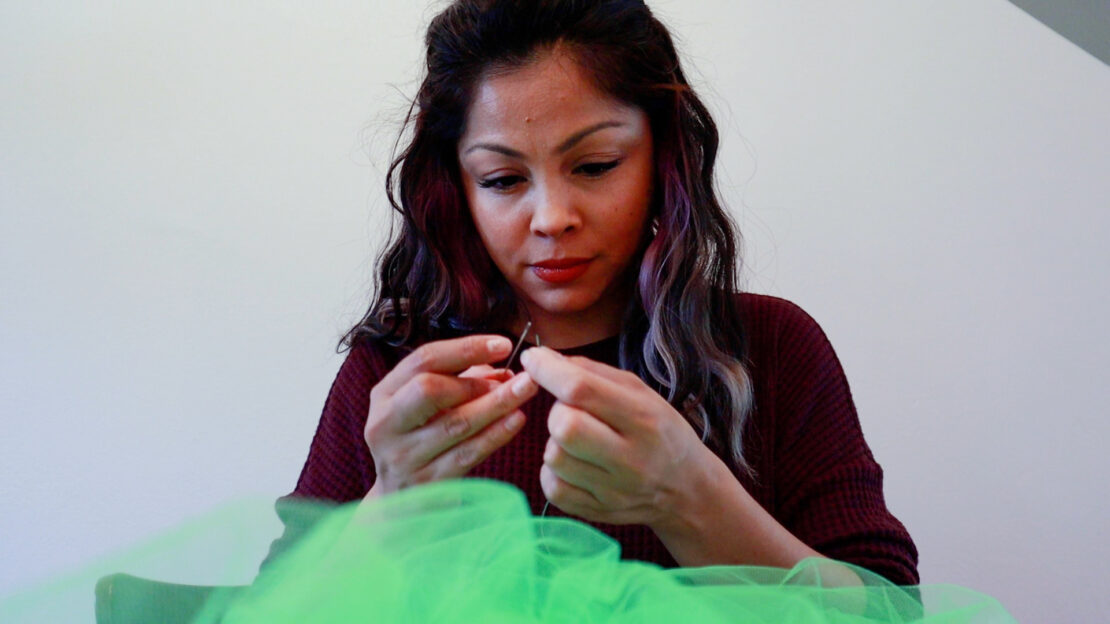 Maricar Cruz, 35, threads a needle while sewing in the dining room of her Long Beach apartment. Photo is a screenshot of a video filmed Saturday, Oct. 23, 2021 by Cheantay Jensen.

“I love Halloween, I love all things creepy-cute,” she explained.

Cruz said she’ll make all kinds of costumes, but she gravitates toward children’s costumes, making them for friends and family. Or the occasional pup.

“And the best part, too, is that usually when I make costumes, it’s for someone else, so there’s a sense of accomplishment of seeing them happy and enjoying something that I created is also a big win.”

Learn more about Cruz and watch her create a children’s Oogie Boogie costume from “Nightmare Before Christmas” by watching the video above.