Let’s Yolk About It, a Belmont Shore breakfast spot, survived after opening a year into the pandemic, and now the owner is revamping its menu and brought in a big name chef who is a freelance producer on the Food Network.

Owner Rebecca Hinderer brought in chef Hugo Sanchez, who has worked on a variety of cooking competition shows including “Cutthroat Kitchen” and “The Next Food Network Star.”

Sanchez and his sous chef Kyle Fry have already begun bringing in new vendors, new products and are retooling the menu with the goal of having it solidified by March 1.

“I’m all about simplicity,” said Sanchez, who is also a partner at MeeMa’s in Bixby Knolls and the culinary director at soon-to-come Brown Soul Brewery Co. in South Gate. “I like a menu that is about consistency and authenticity. I’m a Mexican-American and I travel the world, so I derive my influences from everywhere.”

The tentative menu includes options like the vegan burrito and veggie breakfast sandwich as well as customer favorites like huevos rancheros and fried French toast. Patrons are encouraged to give their feedback over the next few weeks. 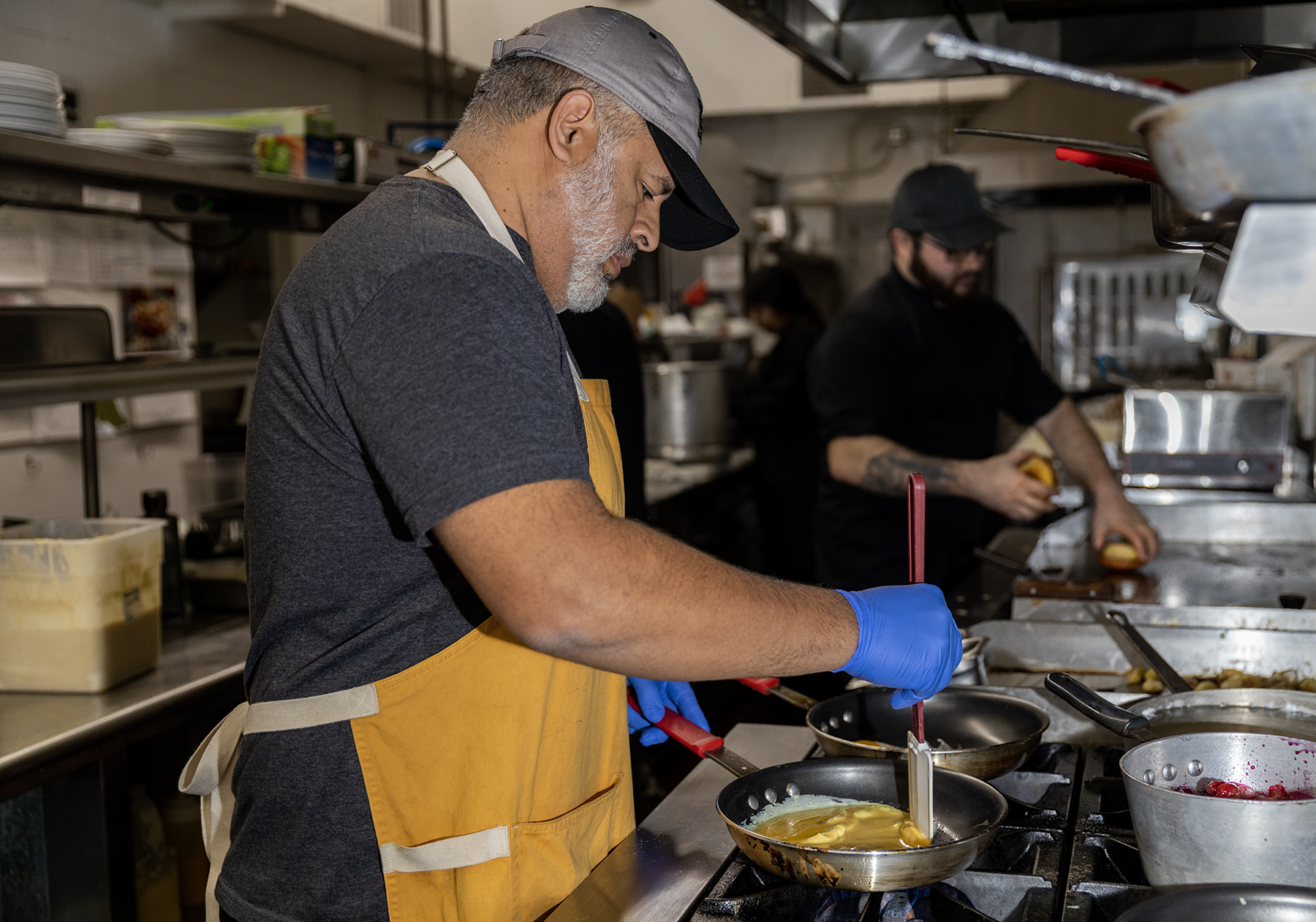 Chef Hugo Sanchez, who has worked on numerous Food Network shows such as Cutthroat Kitchen and The Next Food Network Star, is now leading the kitchen at Let’s Yolk About It, a breakfast restaurant on Second Street in Long Beach’s Belmont Shore neighborhood. Wednesday, Jan. 19, 2023. Photo by Brandon Richardson.

Let’s Yolk About It opened in December 2020 (originally as What’s Crackin). It wasn’t the best time to be in the restaurant business, as the city had enacted indoor dining bans due to a high number of cases and deaths from COVID-19.

The restaurant went in knowing this, but Hinderer said she was fortuitous in finding landlords willing to work with her in signing a lease at the location that was formerly Thai Gourmet.

She admits it was also a bit naive.

“We were just jumping into an empty pool,” Hinderer said. “We saw a little water at the bottom and we thought we could swim, and it ended up being enough for us.”

They focused on a lot of take-out service and scraped by, especially with items like burritos that travel well.

“The community really came out and supported us,” she said. 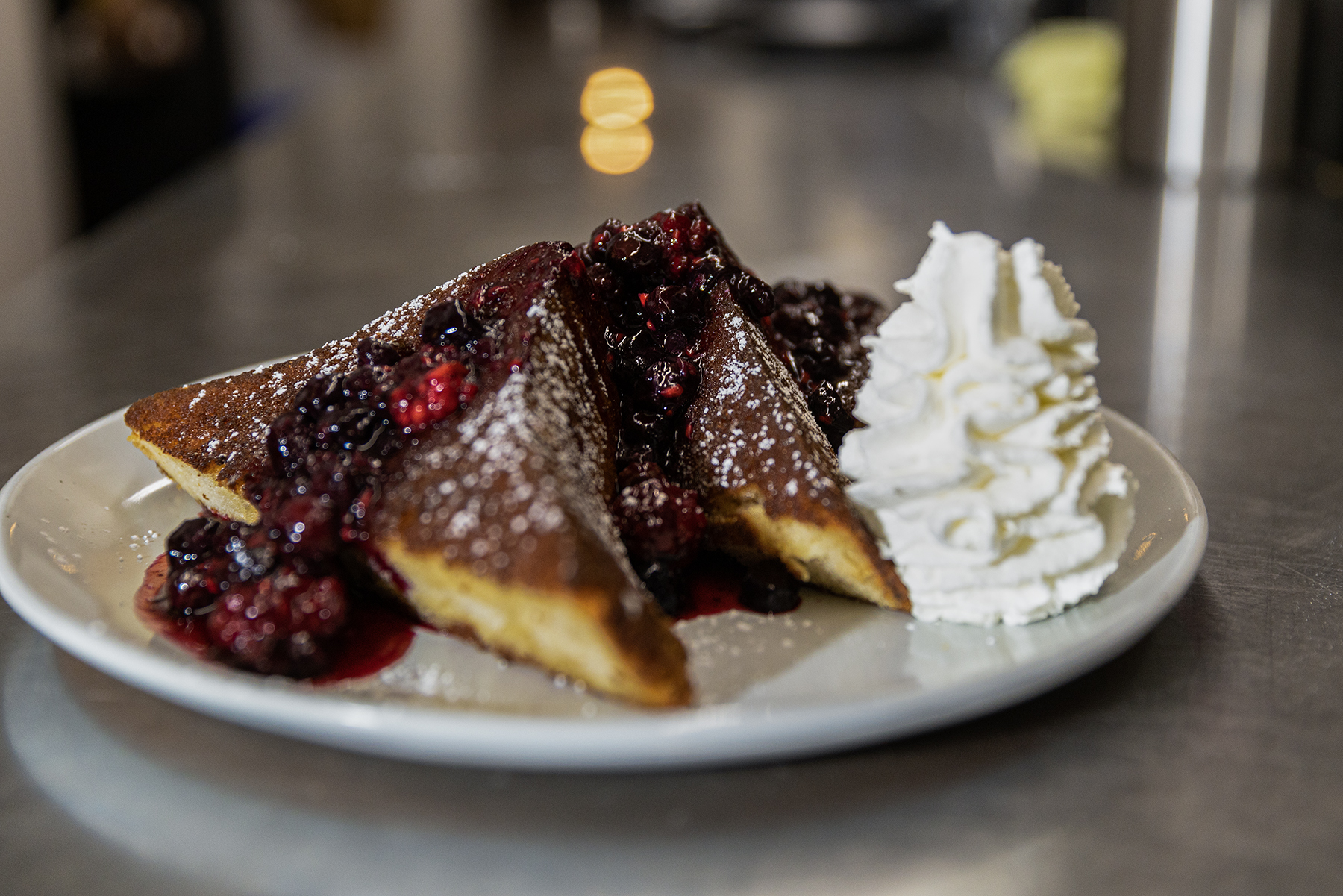 An order of French toast at Let’s Yolk About It, a breakfast spot on Second Street in Long Beach’s Belmont Shore neighborhood. Wednesday, Jan. 18, 2023. Photo by Brandon Richardson.

Hinderer said the focus of the restaurant will be quality over quantity.

Among his many accolades, Sanchez is a food stylist and culinary producer for shows on The Food Network, as well as Netflix, Hulu and Peacock TV.

Hinderer connected with Sanchez through a mutual friend, and during one of those meetings he made her a meal that made a lasting impression.

“It was a vegetarian breakfast sandwich, the eggs were incredibly fluffy, there was arugula and white cheddar on a brioche,” she said. “I don’t know why, but it was a knockout for me.” 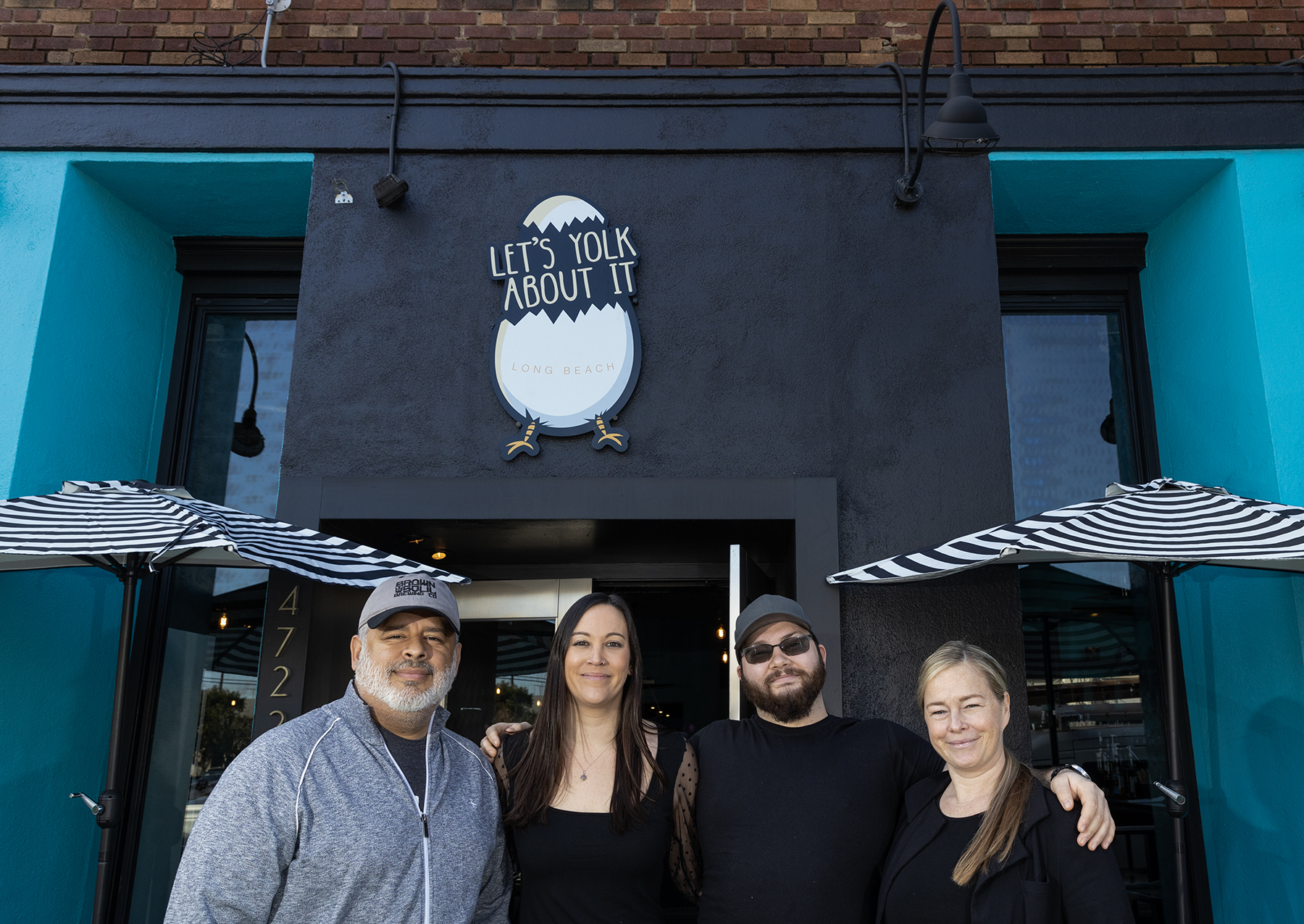 Along with serving breakfast and brunch, Let’s Yolk About It also allows customers to rent the venue for private events, like wedding rehearsal dinners, from 3 to 11 p.m.

Having already hosted birthday and holiday parties, Hinderer wants the restaurant to constantly be filled with joy, even offering customers an intimate eating space tucked away in the back of the restaurant.