Not everyone goes to the Grand Prix to pay rapt attention to who’s leading in all the various races. Some go to wander through the Lifestyle Expo to purchase racewear or gawk at the latest concept cars and other high-performance vehicles. Some just sit around and soak up the noise. There’s people-watching to do, swag to be won, music to be listened to. But whatever draws you to the Grand Prix, you’ve gotta eat.

The trackside offerings make the day seem like a weekend afternoon brunch gone mad with racket and flying trucks. Bottomless micheladas are enjoyed with a side of anything that can survive a few minutes—or hours—on a giant grill or a long hot dip in a deep fryer.

No one at the scores of food stands scattered throughout the circuit will annoy you with the question “Would you like fresh fruit or cottage cheese with that?” when “that” is a card-table-size slab of barbecue-sauce-smothered pork.

If you wander around, though, you might find some surprising offerings, especially if you stroll over to the area behind Grandstand 31, where you’ll find the Food Truck Experience, which is where the Post team of professional eaters found the best stuff.

Here are the top places we visited on an unreasonably sizzling 95-degree Friday afternoon. Check them out on Saturday or Sunday, when it’s expected to be cooler. 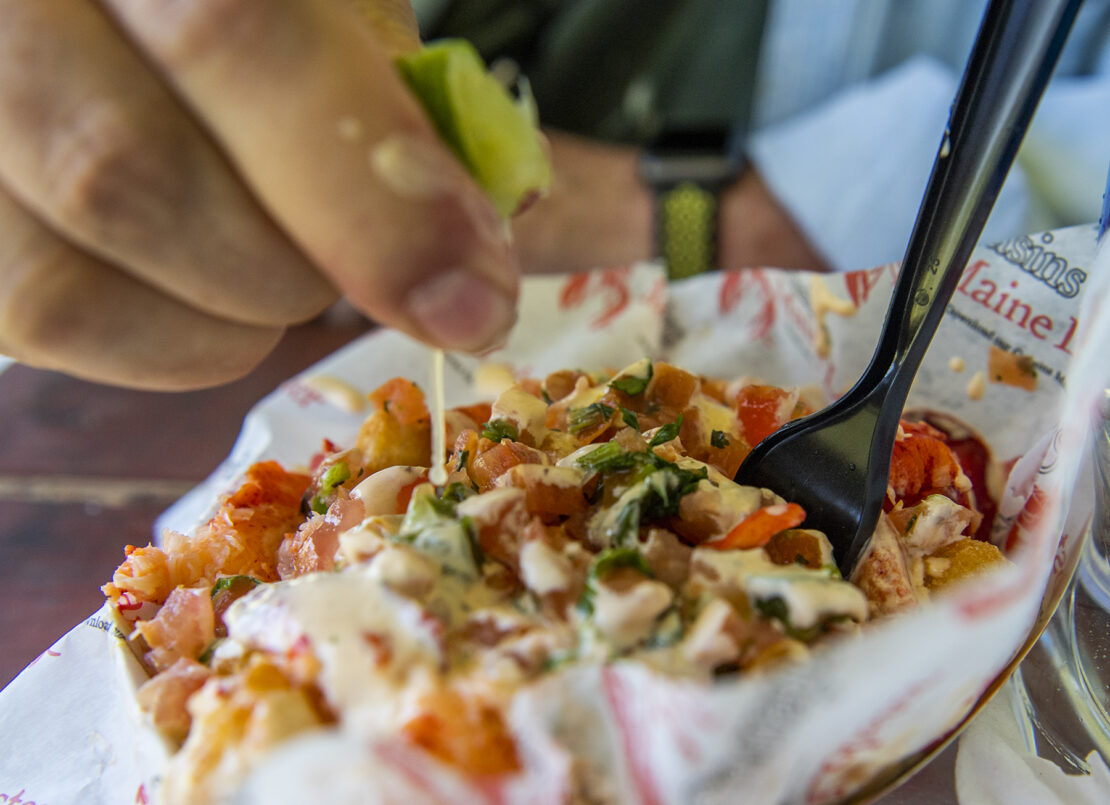 A squeeze of lime on the lobster tots from Cousins Maine Lobster in the Food Truck Experience near Grandstand 31 at the Acura Grand Prix of Long Beach in Long Beach Friday, April 8, 2022. Photo by Thomas R. Cordova.

How do you get an order of tater tots to go for $20? Simple. Toss in a handful of lobster bits and drench it all with pico de gallo, cilantro, lime and a sort of tartar-y sauce. It’s actually a little bit generous with the lobster, and considering the market price of that crustacean these days, $20 might actually be fair. Photographer Thomas Cordova and I happily polished off the whole order, which might’ve been a mistake now that I look back on it, because we still had a lot of eating to do. 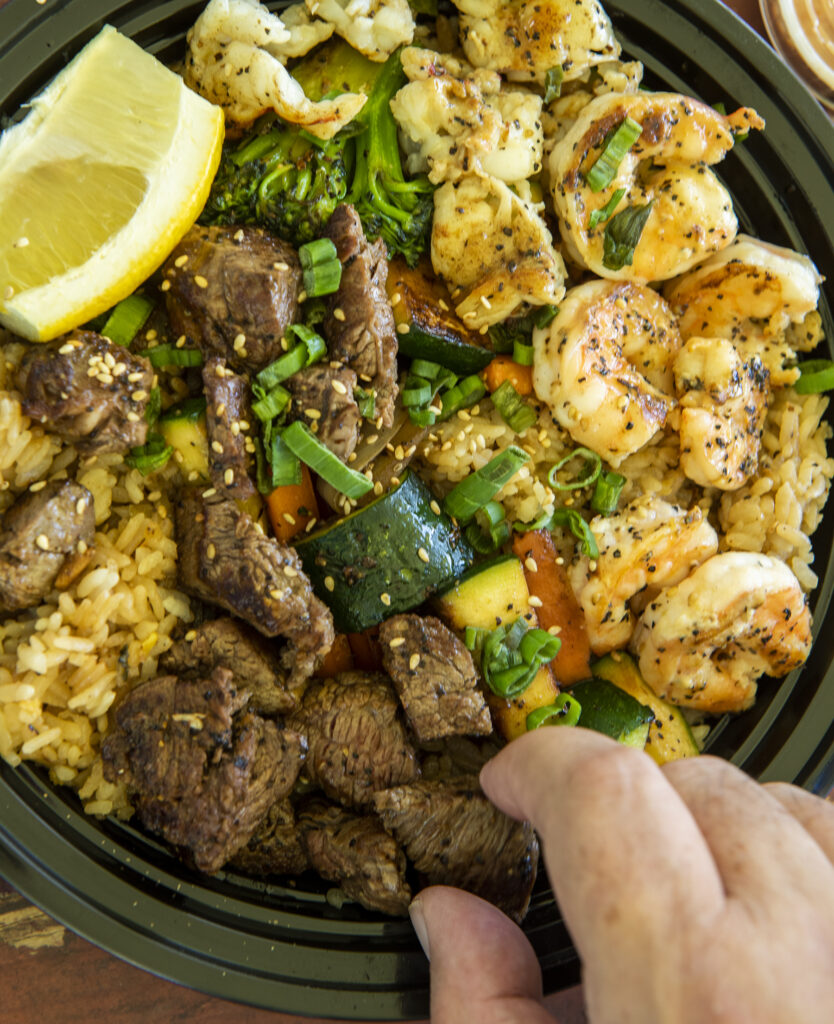 The granddaddy of all: a surf, surf and turf, which is lobster, shrimp and filet mignon from Hibachi Queens in the Food Truck Experience near Grandstand 31 at the Acura Grand Prix of Long Beach in Long Beach Friday, April 8, 2022. Photo by Thomas R. Cordova.

When you can’t make up your mind, just buy everything that’s offered, which is what the Queen’s Choice is: The surf and turf and surf platter comes with heaps of shrimp, filet mignon and lobster served on a bed of delicious rice, with sides of garlic butter and fiery sriracha sauce. It’s all expertly seasoned and includes your day’s required amount of vegetables. By this time, our team had swelled to five and everyone gave the dish high marks. For $45, it’s plenty of food for four people, or more if those people started out with an order of lobster tots. 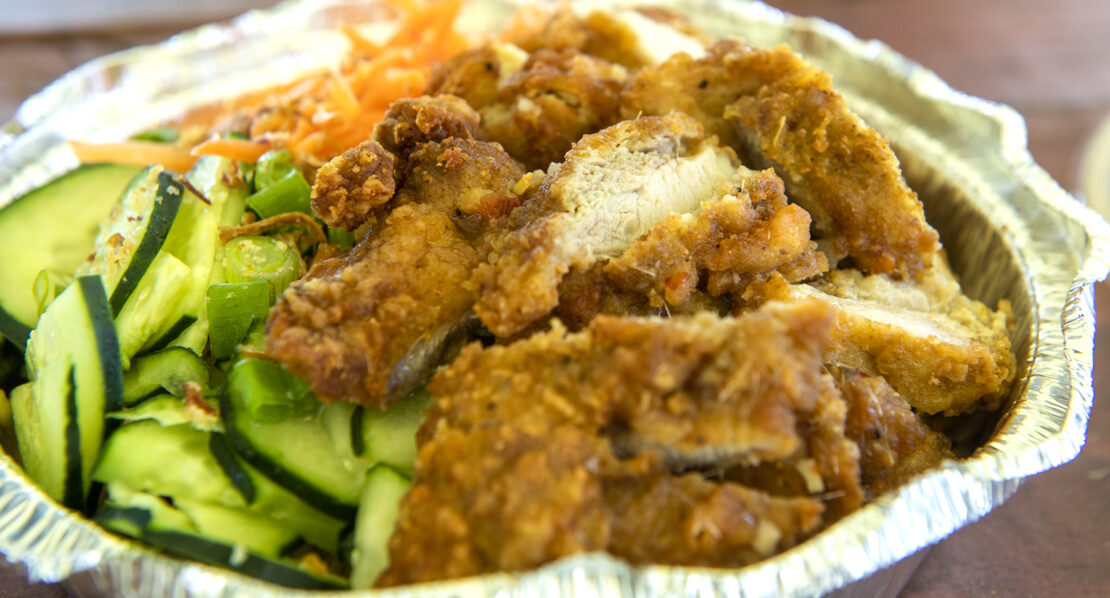 Indonesian fusion from Stop Bye Cafe gave us a difficult choice, but we eventually opted for the fried lemongrass chicken for its shareability, which we wouldn’t have as easily achieved with the Borneo pulled beef sandwich with a fried egg on top. Once again, the food was great even after everything we had consumed before. We were hardly starving by this point, but we still wolfed down this perfectly seasoned chicken served with cool slice of cucumber.

Pulled pork sandwich at Vic J’s BBQ, west side of the Convention Center 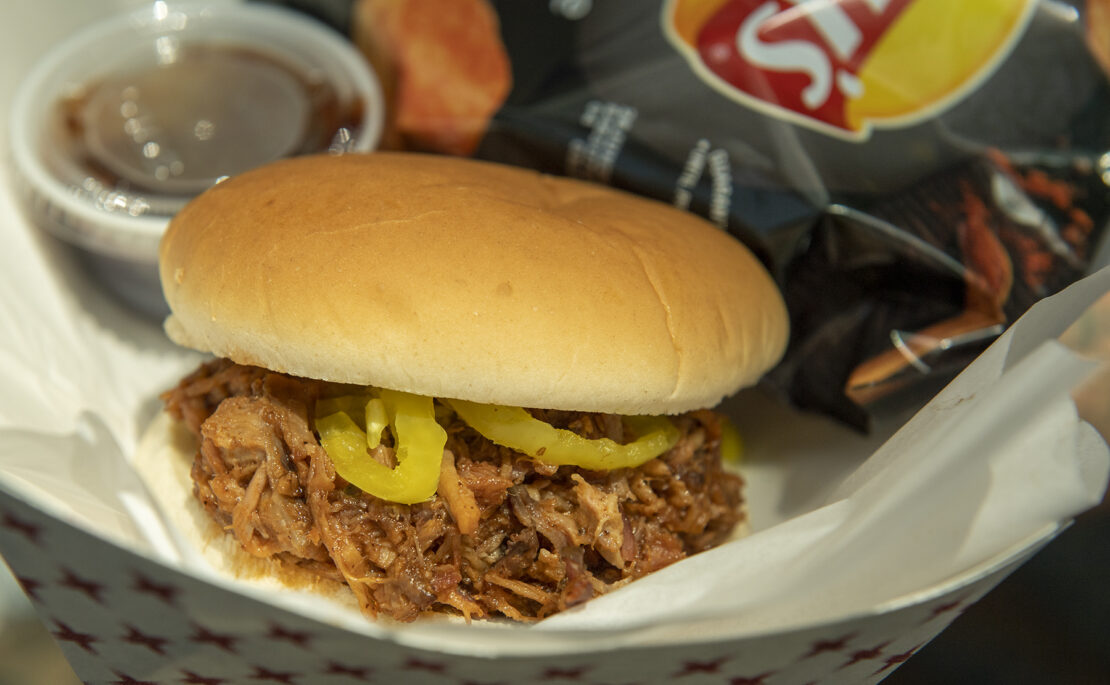 Reporter Jason Ruiz convinced me that a pulled-pork sandwich is a rich tradition for us on Grand Prix Friday, so, not to break with an apparently long-standing bit of racing history, we split one from Vic J’s that came with a bag of chips and one or two slim slices of pepperoncini that may have been included normally or by accident, kind of like the way you sometimes get an errant french fry with an order of onion rings. Either way, ask for a few extras. The sandwich was a good one and came with a side of barbecue sauce. Decent race fare.

Ice cream from Afters Ice Cream, west side of the Convention Center 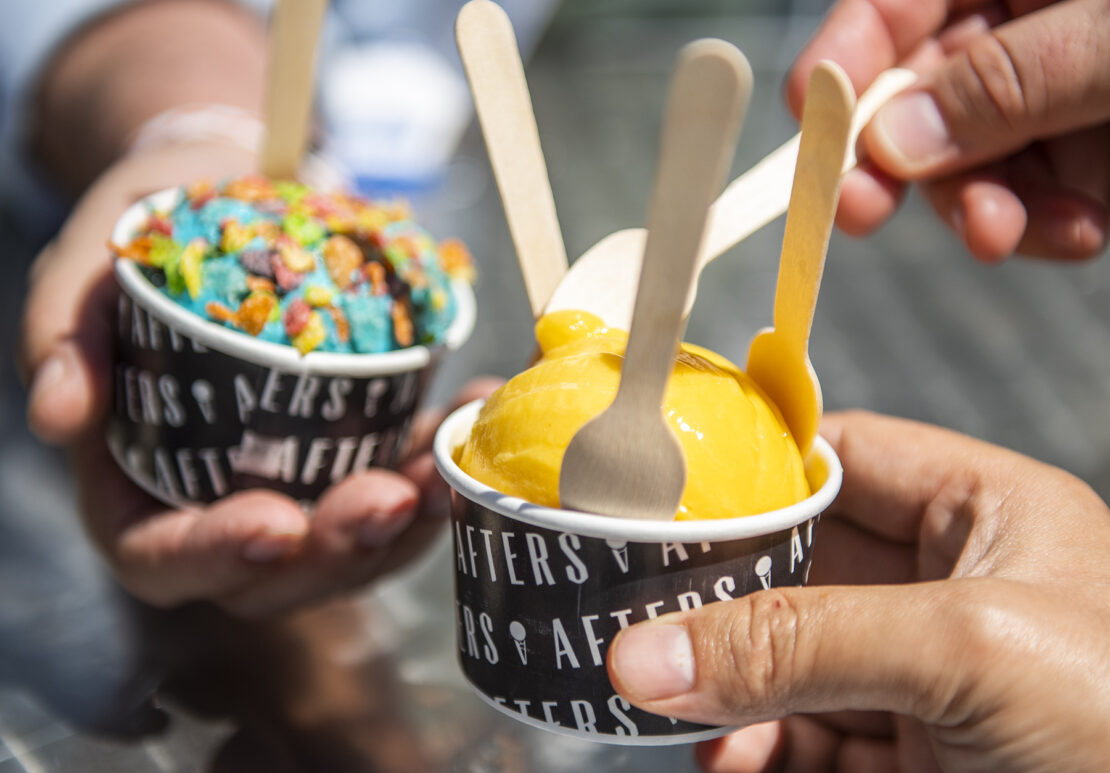 Nothing like sharing mango sorbet and Cookie Monster ice cream from Afters Ice Cream with friends in front of the Long Beach Convention Center at the Acura Grand Prix of Long Beach in Long Beach Friday, April 8, 2022. Photo by Thomas R. Cordova.

Our sprawling family of now a half-dozen tasters met up again for a dessert of mango sorbet, Cookie Monster with Fruity Pebbles, and cookie butter with proprietary Afters flakes, which were like Corn Flakes, only frosted, so, like Frosted Flakes. The mango sorbet was deemed the best of the trio, probably because it was so light and refreshing—and light and refreshing was what we were most in need of after a long day of eating and listening to racecars. And heat.