When it was announced in May that Gilmore Music would close after serving Long Beach musicians for 75 years, the music community mourned. The store’s staff, however, was determined to continue its legacy, one way or another, and that drive has evolved into More Music LB, a new music shop expected to open after the new year.

Four former Gilmore employees—Andy Arroyo, Andre and Ettienne Bouyer, and Pedro Rodriguez—banded together after the iconic store’s closure, each having worked at the store for 12 or more years.

“We are a family,” said Rodriguez, who worked at Gilmore for 14 years and was manager when it closed.

Initially, the small group of musicians sought to purchase the Gilmore store from Linda Gilmore, wife of Clint Gilmore, who died in 2020. However, the asking price was simply too much, Rodriguez said.

“We really wanted to honor his legacy because [Clint] employed us and we were thankful for that,” Rodriguez said. “But we couldn’t even keep the name.”

There is no animosity between the group and Linda Gilmore, Rodriguez said of the failure to come to an agreeable price for the business. “It’s just business,” he said.

Without a space for their store, the group went on the hunt, which proved challenging, Rodriguez said, adding that he started driving for food delivery service DoorDash to pay the bills. While out making deliveries, he drove by a vacant storefront across from Thomas Jefferson Middle School on Seventh Street. A number was posted on a banner, so Rodriguez called it. 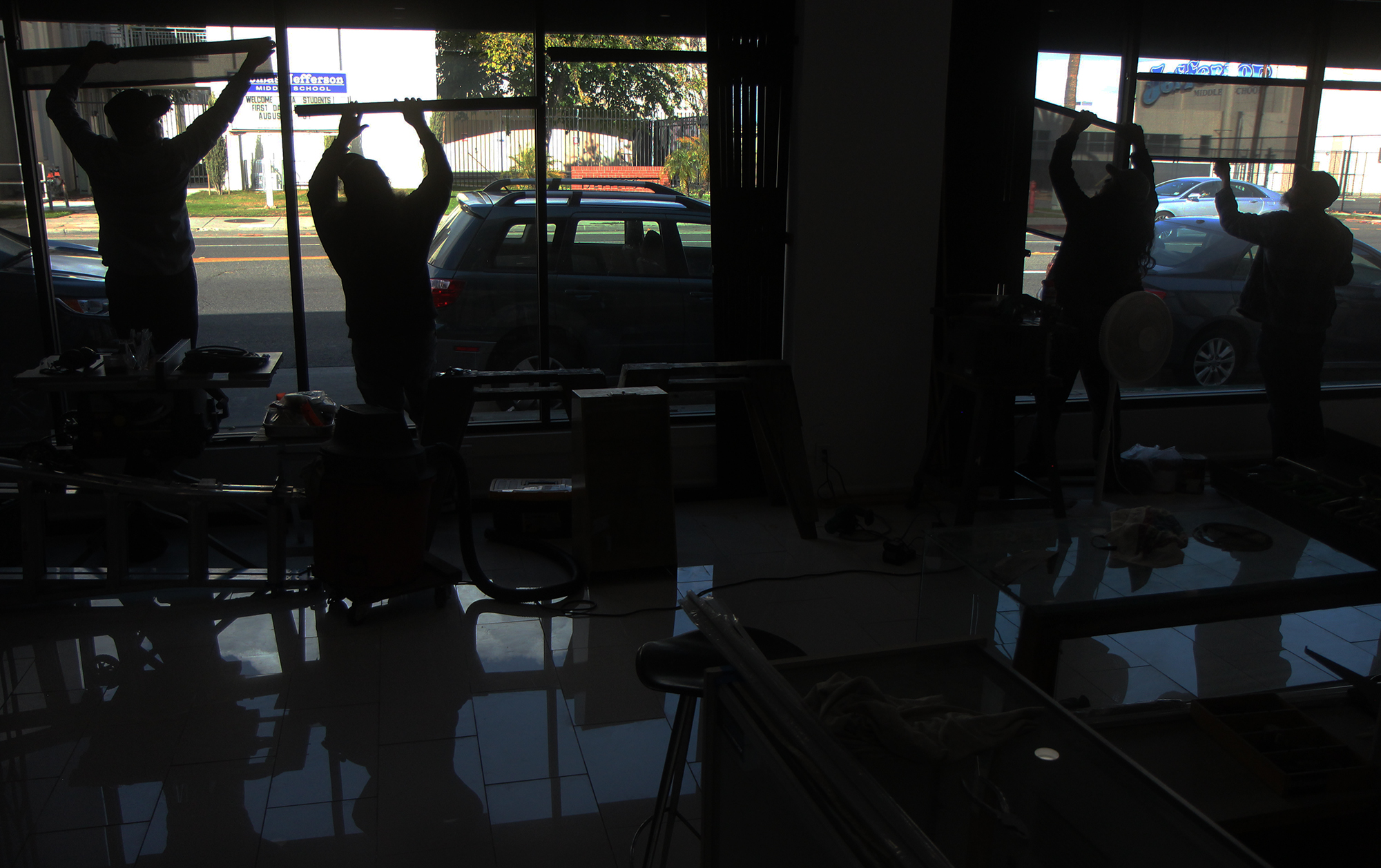 The co-owners of More Music LB, a new music store by former employees of Gilmore Music, adjust the shades in the window of their Seventh Street storefront Friday, Dec. 24, 2021. Photo by Brandon Richardson.

While More Music LB will not carry on the name Gilmore, Rodriguez said it will carry on its purpose.

“We are here for the community,” Rodriguez said, adding that he hopes the store will become a hub for local musicians to meet, hang out, grow and promote themselves. “We want to be a store … that’s going to be able to link musicians with each other.”

The store will have a giant chalkboard for local musicians to promote upcoming shows, seek new members and more, Rodriguez said.

Each of the four owners specializes in different areas: Arroyo in percussion, live sound, engineering and instrument repairs; Andre Bouyer in record players and turntable repair, and bass, guitar and instrument electronic repair; Etienne Bouyer in bass and guitar repairs, set up and maintenance; and Rodriguez in private lessons and instrument repair, including being an authorized repair center for Taylor and Gibson.

“It’s going to be everything except a recording studio,” Rodriguez said. “We’re going to do everything here.” 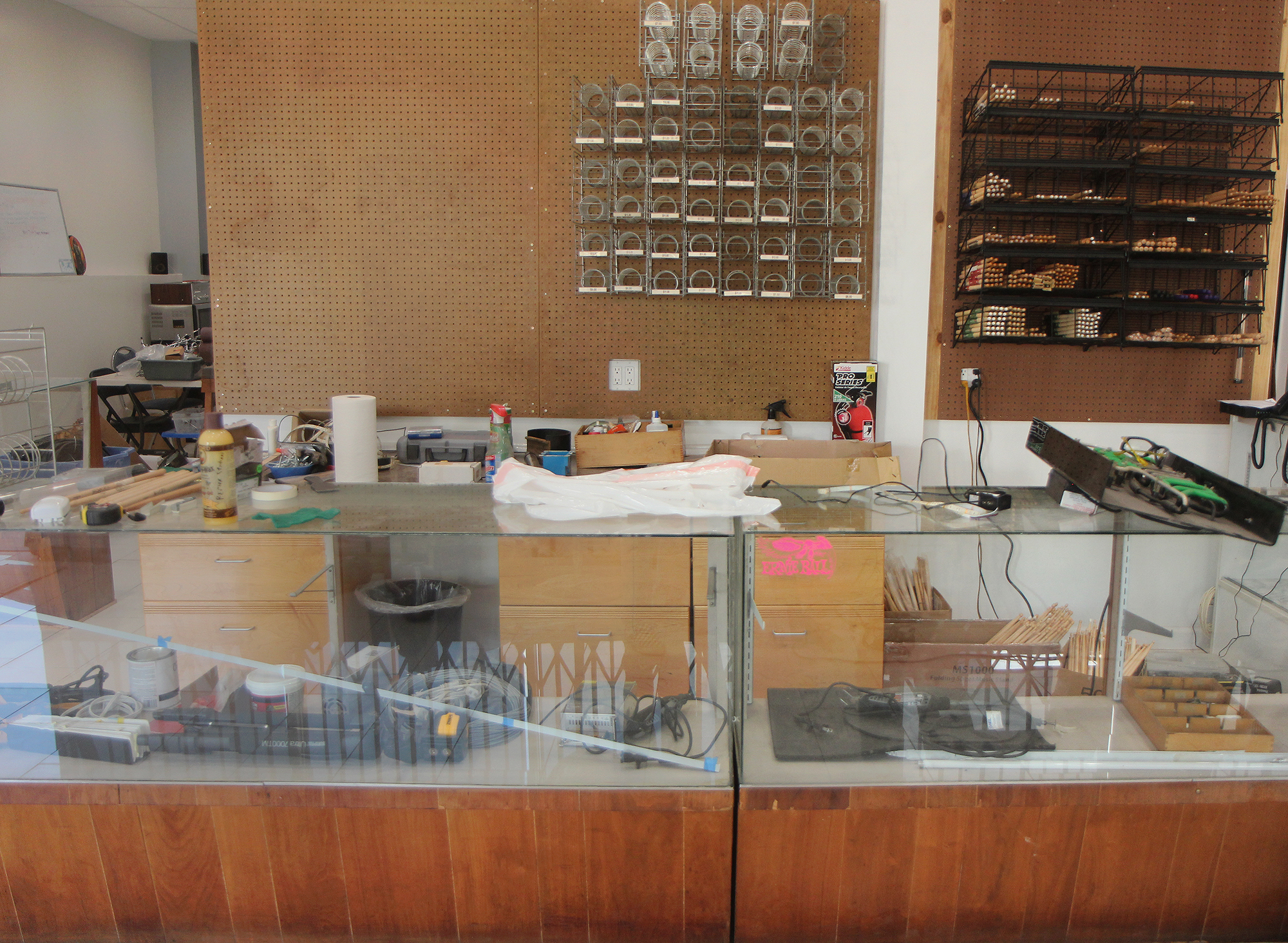 What is to become the front counter and display case of More Music LB, a new music shop expected to open next year at 3736 E. Seventh Street. Friday, Dec. 24, 2021. Photo by Brandon Richardson.

Rodriguez said the store is going to open with the basics—guitars, basses, ukuleles, banjos and other stringed instruments. However, over time, he said the plan is to expand to as many instruments as possible, including woodwinds, brass, classical and less common pieces such as shofars and other instruments.

The store also will sell and repair amplifiers, Rodriguez said.

The group had hoped to open ahead of Christmas to take advantage of holiday shoppers but delays with the city have likely pushed the opening date to the first or second week of January—hopefully. The business is waiting for its final inspection, Rodriguez said, but with the holidays it has been all but impossible to get city staff on the phone, let alone out to the store.

Once they have the inspection and business license in hand, Rodriguez said the store could open in a couple of days.

“We’re excited,” Rodriguez said. “We are the same people and we’re going to give the same or better customer service.”

Editor’s note: This story has been updated with the correct address.

Gilmore Music to close permanently at the end of May