From offering movies to workspaces, hotels have gotten creative in adapting to the pandemic • the Hi-lo
- ADVERTISEMENT -

Last month, with the Dodgers in the World Series but many fans unable to watch the games at their favorite sports bars, Holiday Inn Long Beach Airport converted, for the first time, its outdoor pool and courtyard into a viewing area offering not only big screen TVs, but bacon wrapped hot dogs, street tacos and full bar.

Over the past six months, area hotels, decimated by the near-standstill in business and leisure travel, have offered special rates on accommodations, food packages and converted rooms to “offices” for those suffering work-at-home cabin fever.

All businesses in that broad swath called hospitality have had to approach the challenges of the pandemic with equal parts creativity and desperation. Countless restaurants have gone alfresco and retail centers such as 2nd & PCH are offering outdoor movie nights. Cultural organizations ranging from the Aquarium of the Pacific to the Museum of Latin American Art to venues such as Alex’s Bar have quickly had to package content online ranging from academic to artistic to EDM.

“We’ve totally shifted from corporate travel from other areas, travelers from other places to being completely local, everything coming within a drive distance,” said Allison Lesser, Hotel Maya’s director of sales and marketing. “We’ve had to come up with creative ways to sell our rooms: day rates, the packages, leisure, it’s all become completely locally focused and we’ve become more creative about how we go after that market.”

The reason for the shift in focus is simple. While local restaurants, bars and museums do have their share of tourist business, the large chunk of their revenue comes from local residents. But big, corporate hotels are beholden to customers who come from out of the city, state or country, business and leisure travelers, two segments that basically have not existed for the past six months.

“Never in Hilton’s 101-year history has our industry faced a global crisis that brings travel to a virtual standstill,” said Christopher Nassetta, Hilton’s chief executive during the summer.

The Hilton Downtown, which reacted to hard times by hosting an outdoor summer movie series that was met with such enthusiasm, the weekly event has been extended through the holiday season. Now, you’ll not only be able to see how the “Grinch stole Christmas,” Dec. 1, but do it while enjoying apple cider, hot cocoa, S’mores and, yes, a full bar. (It is the happiest time of the year.)

Imran Ahmed, general manager of the Long Beach Marriott near the airport and chair of the Long Beach Area Convention & Visitors Bureau, said talk about shifting focus to locals began among his colleagues almost immediately. At his own hotel, he and his sales staff soon began targeting locals aggressively on social media.

“We started offering special deals and once we saw the needle going north, we decided to expand our efforts in neighboring cities, Orange County and LA,” Ahmed said. 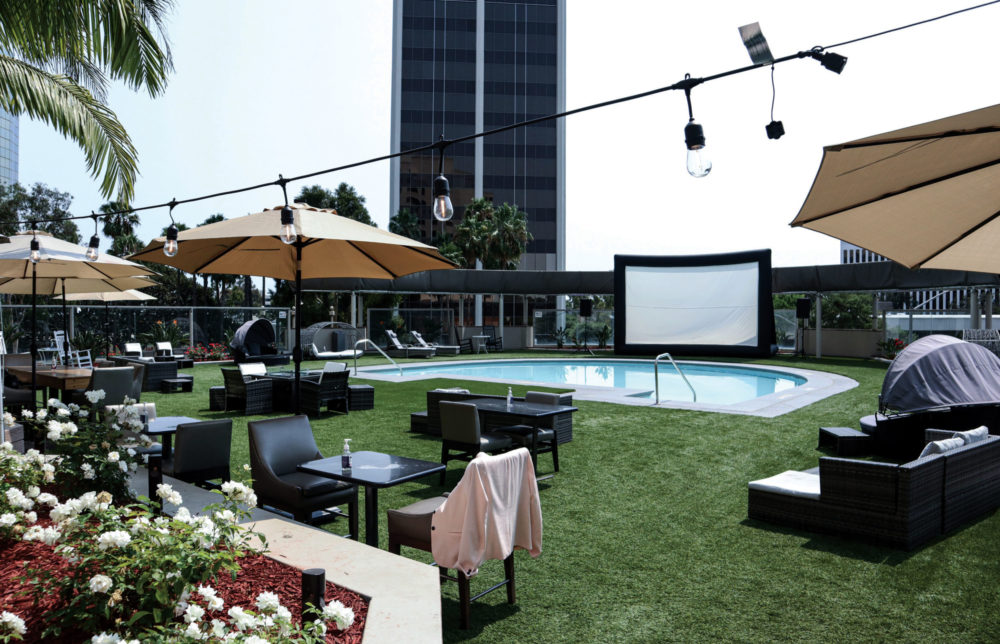 “We did get people who just wanted to get out and not cook, not clean, because that’s all some of them were doing: cooking, cleaning and going back to cook the next meal,” Ahmed said.

While offering people a respite from a redundant existence, local hotel managers say that offering those people something to do, something unique outside of the usual, daily routine, is key. Simply dropping room rates has proven ineffective, they say, because if someone’s concern about being in a hotel is about safety, taking $20 off their daily bill isn’t going to change their mind.

“Everyone started panicking in the beginning and lowering the rate,” said Holiday Inn general manager Mooyon Kim. “But actually, it’s never been about the rate. It’s about giving people a level of confidence, about offering them something they can’t get elsewhere.”

Lesser says the Maya’s “Minimony” package that allows for up to 40 people, socially distanced, to celebrate weddings, anniversaries, etc., has met with success.

“Any opportunity we have, we want to figure out how we create something that will attract people to us.”

How many more things they will have to come up with remains to be seen and could very well be determined by forces outside their control. Given the success of his World Series event, Kim said he was considering hosting weekly football games on Thursday and Monday nights, but gave up on the idea when he heard of a possible new wave of COVID.

“We thought it could be a good, consistent social event for us, but we decided not to execute it for now,” he said. “We don’t want to cause any trouble in the city.”

While all hotel management are looking for ways to ride things out, however long that takes, Kim has turned some of his thinking to what comes after. Convinced that his hotel will never fully get back all the business travel it lost—it made up about 80% of revenue—Kim made the decision to embrace the telecommuting that will make much of it unnecessary.

“We are going to invest in technology so we can offer local people the ability to have virtual meetings and conferences here,” he said. “We have to keep finding new reasons, new ways to give people a reason to keep using us.”

Though finding what those things are could prove challenging, seeing as how this is all rather uncharted territory. Ahmed, who’s been in the business nearly 40 years, said he and his colleagues would like to follow the trends but, “here we have no trends, no time frame. We have no idea.”

Asked if there was anything, anyone, any agency could do to help his industry and his colleagues, ultimately get back on their feet, he nodded.