If you see Katie Kelly’s pastel purple vending machine at a Long Beach bar or other business in the near future, expect the unexpected. Instead of snacks and drinks, you’ll find an array of small artworks by local artists, knick knacks by local makers, and more, all in line with her recently established creative vending business, Moonlight Vending.

Kelly said she was inspired by The Venderia in Portland, a fleet of more than 15 vending machines containing random treasures from tampons to tarot cards—placed inside bars, hotels and restaurants and started by owner/operator Taylor Valdes in 2013.

While Valdes told Portland news outlets she’d bought her machine at a laundromat, Kelly’s was a Craigslist find from the ’70s, the clunky piece of simple machinery igniting in her a reason to be creative, to take something that could easily be considered “mundane and boring” and turn it into something far more engaging.

“I’ve gotten told by a couple of people that there’s such intense community here, and there’s a lot of art all over the place,” said Kelly. “So I feel like if there’s anywhere in Southern California that this kind of thing is gonna work out, Long Beach is definitely the place.”

Kelly, 25, lived in Long Beach for a short time with her father when she was five, but grew up in the Bay Area, returning to Long Beach after college. Wanting the name of the business to exude something “witchy,” it was when she was brainstorming on a walk back from Alamitos Bay with her husband that the two landed on “Moonlight Vending.” When asked if, perhaps, the moon’s reflection on the still waters of the local inlet had inspired her, Kelly laughed, and said, “It was daytime.”

“He actually thought, ‘sunlight,’ […] how can we make that more witchy?” Kelly said. So “Moonlight” it became. She even named the vending machine, “Luna.”

So far, Moonlight Vending’s presence on social media platforms, including TikTok, has received a positive response. Artists from around the region are already asking how they can get their pieces in the machine, while one video Kelly made explaining her concept, while highlighting other creative vending businesses across the country (there’s a lot), garnered more than 14,000 likes.

From scrunchies and earrings, to tiny art prints and gemstones, mystery packs, enamel pins and stickers, Kelly’s focus is stocking the machine with fun items as well as artwork and wares by local artists and makers. From Long Beach-based Nik V’s “sassy embroidery” (@wastingthyme) to animal skull stickers from Lucy of @cuddlepoofdraws, the group is small but growing.

There’s an application here where artists can apply to sell their smaller wares through Moonlight’s machines.

“My main goal was for it to be fun,” Kelly said. “So, I want [the items] to be engaging and creative. Other than that, there’s a couple of things that I think are just necessary for nowadays, like we’re gonna put masks in there, things like that.” 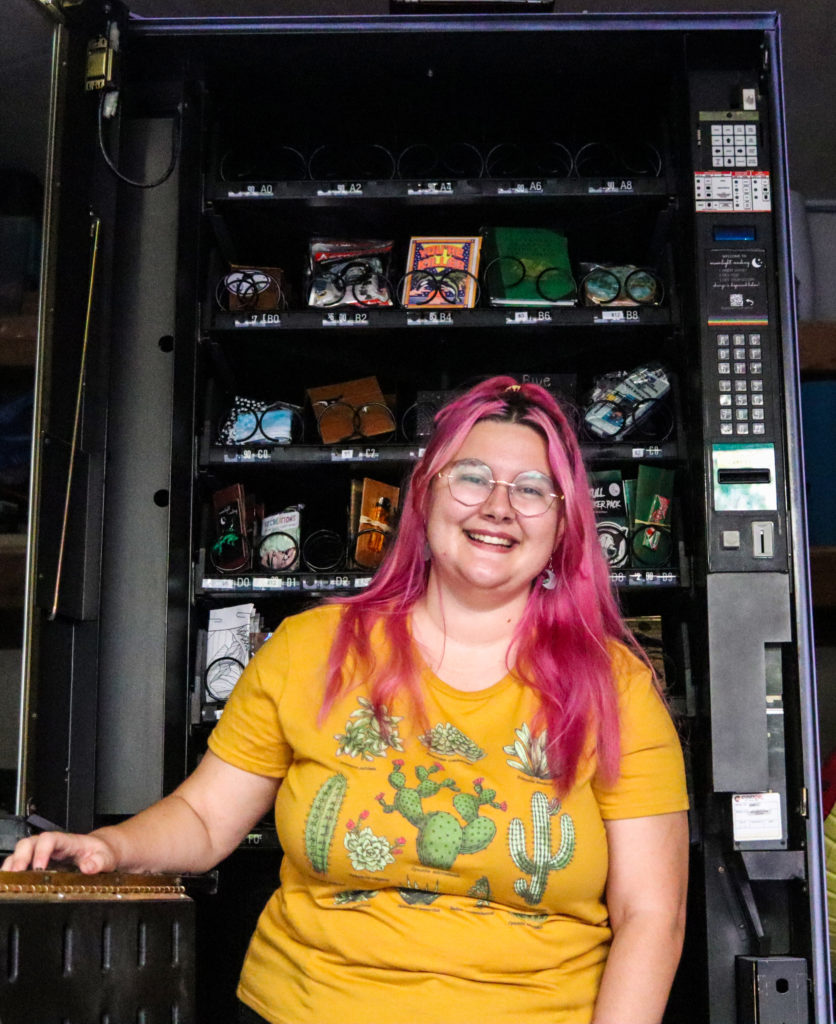 While Kelly continues to put feelers out in search of a venue for Luna—the light purple machine having taken up the car’s spot in her garage—a noble sacrifice in Belmont Shore—she recently refurbished a set of toy capsule dispensers, you know, the kind that look like gumball machines. Full of tiny art prints, positive affirmations and alien pick-up lines (“Are you an alien? Because you just abducted my heart”) the dispensers are destined for Flatline gallery in North Long Beach.

Elizabeth Munzon, director of Flatline, said she’s excited about adding “an interactive art experience” to the gallery. She found out about Moonlight Vending through Reasons to Love Long Beach, a community-centric Instagram page, saying, “I love the idea of creative vending… It’s a creative and unconventional way to have more artists and curators in the space.”

But while the largest of her growing collection of art and knick knack dispensaries sits in the garage awaiting a venue, Kelly said she’s holding back on filling the top row of the machine until she can partner with a business, so she can curate those items depending on what the owner or their patrons might like, including more interactive items that would appeal to bar patrons, for example.

“I’m also really into community building, I did theater for a really long time,” Kelly said. “And with the pandemic, this is like a socially distanced way for me to bring artists together and create community, as well. That’s basically my goal, I want to make friends who are also into cool, weird stuff like I am.”