As he was getting ready to graduate from Cal State Long Beach in 2010, Julio Salgado came across a photo of his peers sitting on the floor of Sen. John McCain’s office in blue caps and gowns. They were calling for a path to citizenship for young undocumented people like himself and the implementation of the DREAM Act to grant residency and the right to work to individuals who migrated to the United States as minors.

He knew he had to get involved in the cause. He did it through art.

One of his earliest pieces titled, “Undocumented, Unafraid and Unapologetic,” depicts a girl in a green cap and gown with the word “hope” written along her tassel. The color green, Salgado says, represented hope for himself when there wasn’t any.

Today, the same image has been reimagined for a statewide Undocumented Students Support E-Handbook that provides resources and support for students who are navigating being undocumented while pursuing higher education. The student in the art piece sports the same color green and is surrounded by the activists Salgado rallied with in 2010.

“This high school student went through community college and eventually transferred, she got her master’s degree and you see the community behind her,” said Salgado.

Navigating his first days in the United States as a queer, undocumented 11-year-old, Salgado said the one thing that kept him going even when his future was uncertain was hope.

‘We don’t have papers’

He was in the 10th grade when he realized the struggle he would face being undocumented in the U.S. When a teacher at Jordan High School in North Long Beach offered him a summer job teaching parents how to use a computer, he went home to ask his own parents for permission but was confused to learn he could not accept it because he did not have a Social Security number.

That is when the worry set in. Salgado began to wonder if he would go to college one day, where he would get a job and whether he would be deported for revealing his status at school, but his hope for the future never diminished. After all, his mother’s name is Esperanza, which means hope in Spanish, so he felt like it was only fitting that he too would use it as something to shape his life.

In 1995, Salgado and his family took a trip to California from their home in Ensenada, Mexico, but stayed to seek treatment for his sister after she developed a life-threatening kidney infection. American doctors convinced his parents to continue seeking treatment in the U.S. even when they longed to stay in their home country. After landing in Los Angeles, they finally settled in North Long Beach in 1996.

As Salgado navigated through learning English for the first time and understanding the dynamics of an American middle school, he was often picked on for not speaking the language.

“I came to the U.S., a place where I was invisible and when I was visible I was made fun of,” he said.

Eventually he would turn to the one thing he did know like the back of his hand, his artwork, to connect with people and make new friends. His teachers introduced him to the work of famous artists like Frida Kahlo and Andy Warhol, whose use of color and storytelling is reflected in his artwork today. He took inspiration for his own style from American TV shows like “The Simpsons” and “Daria.” 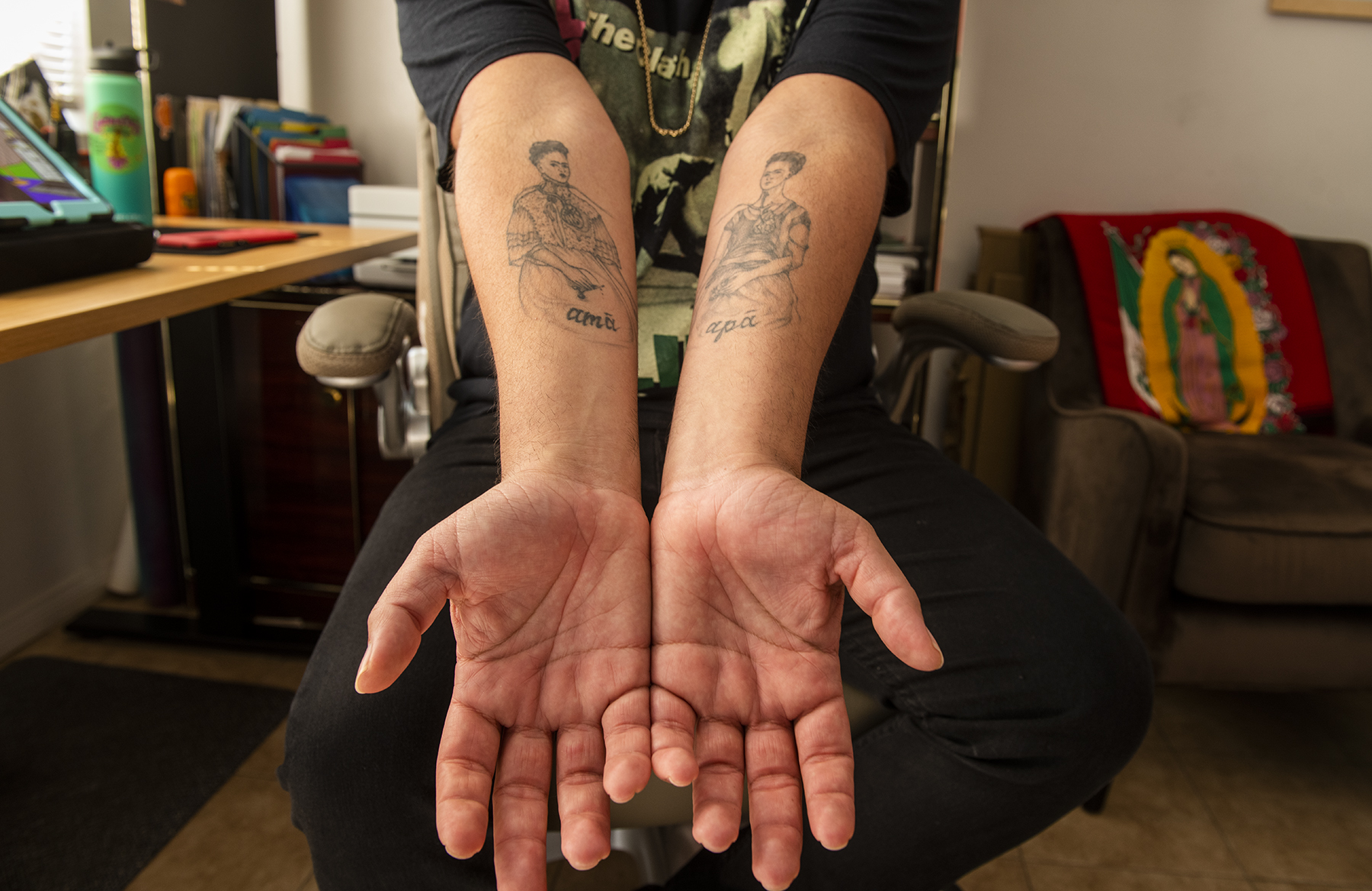 Julio Salgado, Visual Artist, shows his tattoos of his favorite artist Frida Kahlo on his forearm while at his home in Long Beach Saturday, March 12, 2022. Photo by Thomas R. Cordova.

“My plan growing up was to move to New York and become the Mexican Andy Warhol,” he said.

Now, Salgado uses his lived experiences to create, drawing a fine line between artwork and activism. He has documented the DREAM Act movement of the early 2010s and their fight for immigration reform, most notably in his series titled, “I am undocuqueer.” His art has captured the struggle of being queer, undocumented and Latino in the U.S while also being unapologetically himself. His artwork has taken him all across the country; he has been featured in the Smithsonian American Art Museum, the Oakland Museum and the San Francisco Museum of Modern Art.

Recently, Salgado was commissioned to create the cover page for the e-handbook, a project in partnership with the California Community Colleges Chancellor’s Office and the Foundation for California Community Colleges that is aimed toward campus leaders and Dreamer Resource Liaisons in the 116 community colleges across the state, giving them necessary resources to best assist those in need.

“This was a full circle moment for me,” said Salgado, who graduated from high school in 2001 before attending Long Beach Community College and eventually transferring to Cal State Long Beach where he graduated in 2010. He credits his college journey to teachers and counselors who tried their best to help him and other undocumented students when the resources were limited.

At CSULB, Salgado was introduced to other undocumented students on campus who together formed a support group to share those limited resources with each other, including scholarships that didn’t require a Social Security number.

“It was very secretive the way we would meet up … It was very scary to come out as undocumented when you know that there were people, you know, other students on campus who were very anti-immigrant.”

They ended up calling themselves an “AB540 support group,” figuring that if students knew what it was, they were most likely undocumented too. Signed into law in late 2001, AB540 allowed undocumented students to pay in-state tuition at any public college or university across the state. 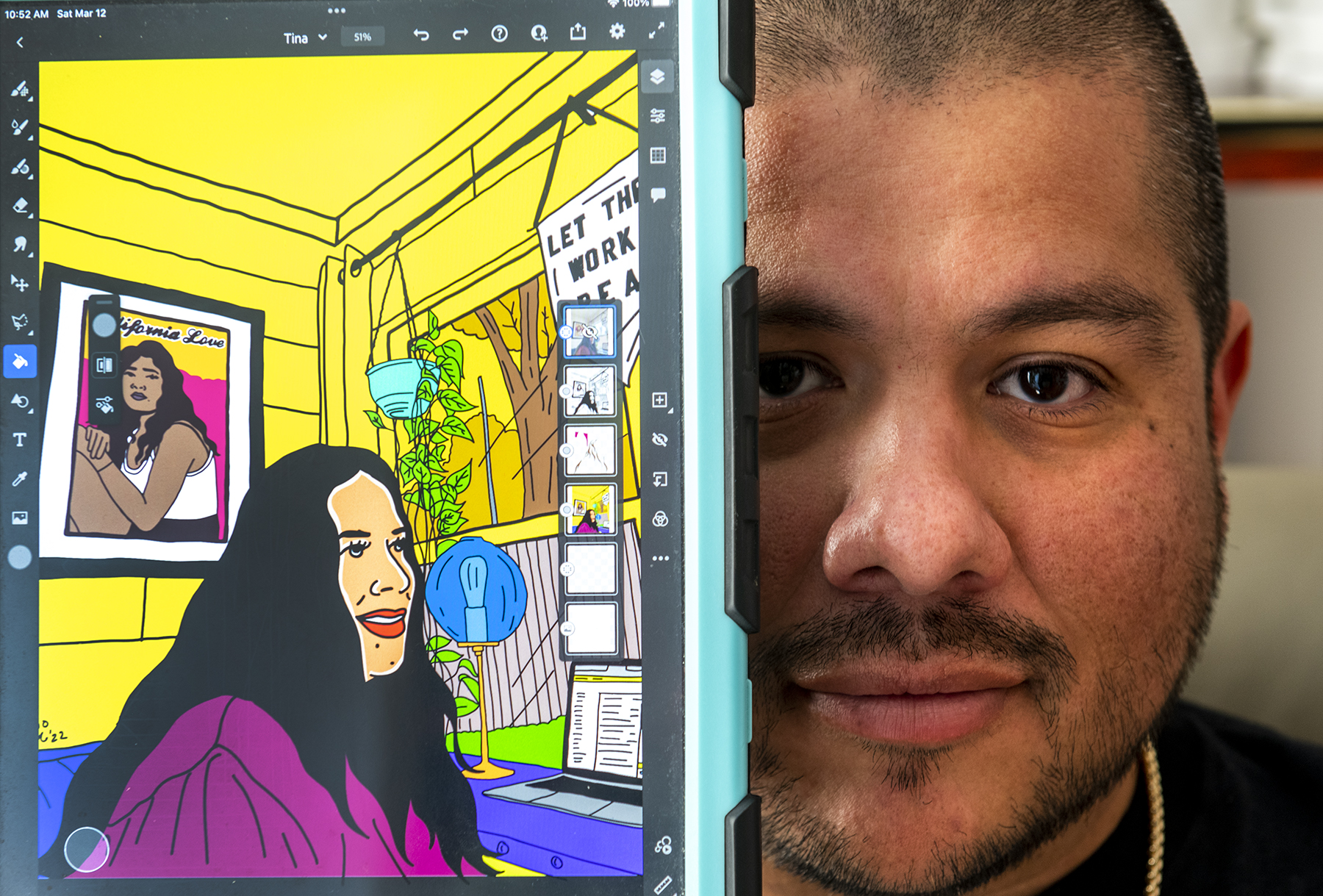 Julio Salgado, Visual Artist, shows one of his latest art pieces on his art pad while in his art space at his home in Long Beach Saturday, March 12, 2022. Photo by Thomas R. Cordova.

When it came to reimagining the piece for the handbook, Julio wanted to honor the community that made those hardships easier to bear. “I think it was important to recognize the people that made it possible,” he said.

Today, those are leaders like Marisela Hernandez, said Salgado, who commissioned him for the project and has been working on the handbook for over a year and a half with the help of over 30 educators across the state that are pushing for better resources for undocumented students and chose him for the cover art.

“The handbook is meant to highlight that we have these people in our circle, we have undocumented doctors, lawyers, artists, community members, community organizers and teachers. Julio was someone who came from our community and that we could use as a role model,” she said.

Hernandez works at the Foundation for California Community Colleges, where she supports the implementation of AB1645 across campuses, designating a Dreamer Resource Liaison to give undocumented students the resources they need to navigate through college successfully.

Similarly, Jose Gutierrez, DREAM services coordinator at LBCC, is one of the collaborators on the handbook who has been working with undocumented students at LBCC for over four years and has seen the effect that having a dedicated support center can have on students.

“It is amazing to see the progress that community colleges have made throughout the years, and to be able to carve out specific spaces for students to come in to feel safe and to feel like somebody understands them. It is great to be able to walk onto campus and see that LBCC is a supportive space for undocumented students,” said Gutierrez.

Salgado wants others to see themselves reflected in the work he creates, his use of color not only showcases his own personality but also reflects the culture and vibrance that is often overlooked in the immigrant experience. “While this country can sometimes throw us curveballs, a lot of us immigrants, we figure it out,” he said.

Salgado has been inspired by the mentors who opened doors for him growing up and now he does the same for others. As an arts program manager for the Center for Cultural Power, Salgado co-created The Disruptors Fellowship, a program for emerging television writers of color who identify as trans/and or non-binary, disabled, and undocumented/formerly undocumented immigrants. “I think of little Julio and how important it was and is to tell our stories,” he said.

“My hope for undocumented students is that they get to focus on what they want to do with their lives and that their immigration status is no longer a thing that they are carrying,” said Salgado. “That they get to realize their dreams but use their experiences as undocumented immigrants to shape the work that they do.”