Guilty, mostly homebound, pleasures including... loving weird food and hating 'Love is Blind' • the Hi-lo
What are the best things about life in Long Beach? • Best of Long Beach 2021 VOTE NOW
- ADVERTISEMENT - 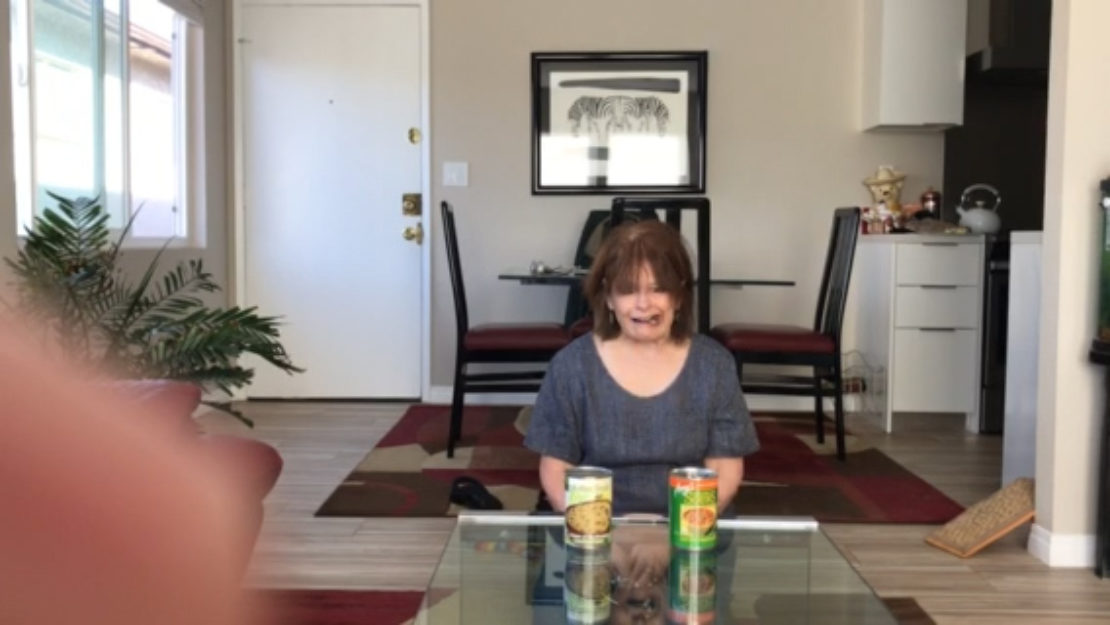 Kate Karp | I do face mask gurning— British term for funny faces—when I’m in public. I twist my mouth and nose and grimace hideously while my eyes casually browse the cans of soup in the market.

Best workout ever for your facial muscles and cheaper than Botox. It’s kind of like dancing around in an elevator while it’s moving between floors and stopping just when the car does, although this has become awkward with security cameras everywhere. 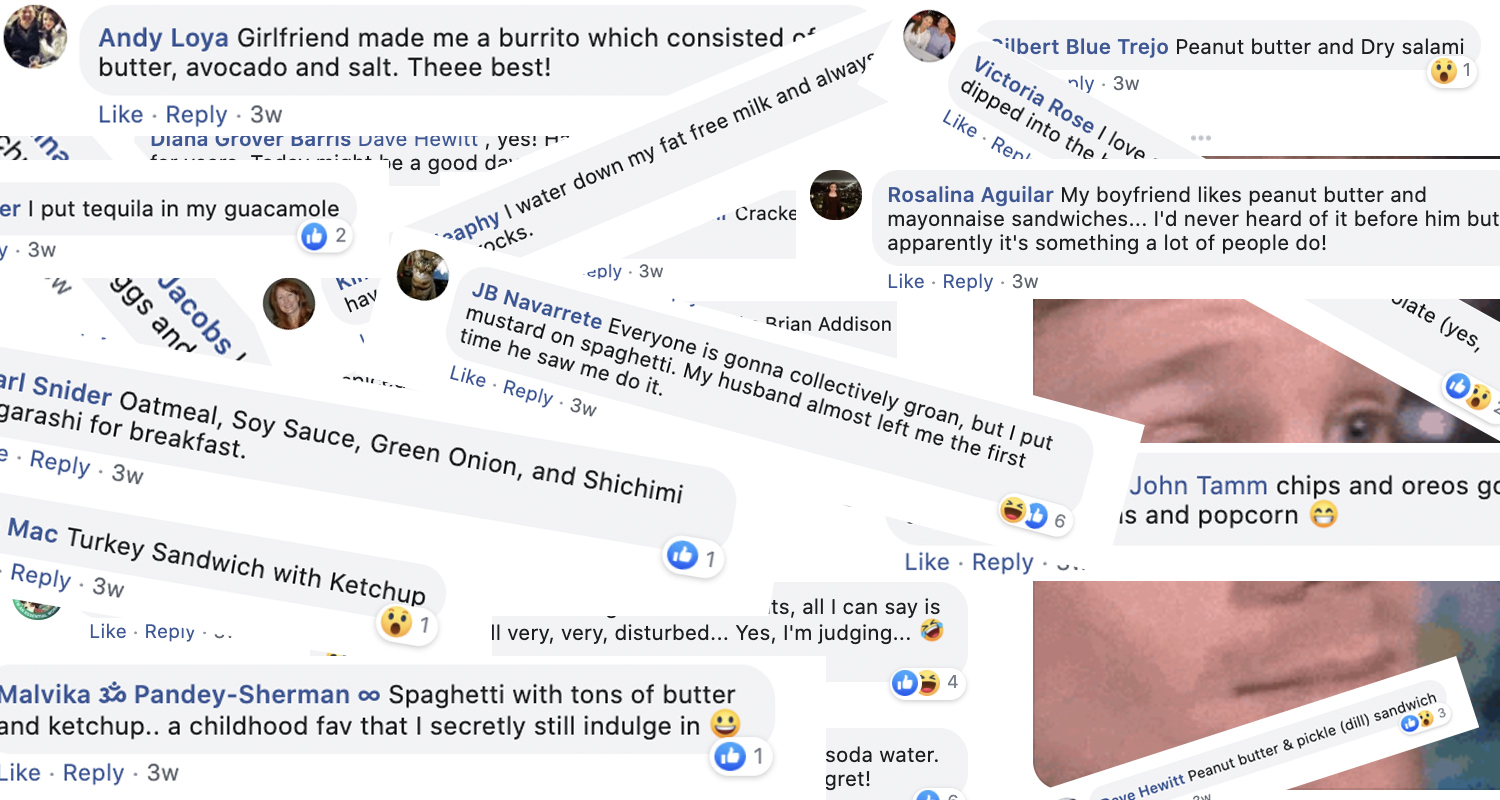 Brian Addison | In the world of food, there are strange things we do. I, for some reason, prefer my orange juice—mainly just orange juice—watered down. Sometimes I add mineral water, but there’s little better than when ice has been sitting in it long enough to chill it but dilute it. I like orange-flavored water more than orange juice itself.

Crumbling cornbread into a glass of milk and downing it.

Amy’s frozen Mac and Cheese “cooked on high in the microwave til the edges are hard, crispy and almost burnt. Remove. Add more shredded cheese and stir.”

The list is not only spectacularly diverse but a wonderful mini-rabbit hole of human taste (or lack thereof) that is definitely worth not only reading but contributing to. Be my guest, click here.

Steve Lowery | So, I believe Jeremy came into my life after I was gifted a bottle of cologne and Googled, “How to apply cologne.” I was guided toward a fella named Jeremy Fragrance and was instantly taken with how deeply he cared and communicated about men’s fragrances.

To be clear, I don’t really wear a lot of cologne. But I have always been drawn towards people who are passionate about things and are able to talk about that passion. Jeremy, who may have been in a German boy band at one time, has spoken for five years in videos in great depth about particular colognes and subjects ranging from, yes, how to apply it, to how to be more confident and how to brush your hair.

He’s funny, but in that way that you can’t be sure if he knows how funny he is. He’s smart. About cologne.

But, most importantly, he loves something, believes in something, is not ashamed to show that love for something. He has so many videos. You would think it would be a pretty limiting subject, cologne, maybe you get a dozen videos out of.

He turns them out with amazing frequency and constant passion and knowledge and spins… Oh, the spins!

I don’t watch Jeremy all the time, in fact, I won’t watch him for months. But when I remember how much I enjoy watching him, I’ll then watch video after video for like a ong time, enjoying myself and wondering what the hell I’m doing, which is pretty much the definition of an obsession.

Jeremy taught me that.

Valerie Osier | This started about a year and a half ago. I think we had just canceled Netflix in order to be more mindful of our time, so I went to YouTube for entertainment. In my recommended videos, the Almighty YouTube Algorithm suggested that I watch “Single Girl Tries the 100 Baby Challenge in Sims 4” by Buzzfeed. Intrigued and curious at what one of my favorite childhood games looked like now, I clicked on it.

And down the rabbit hole I went.

I watched all the 100 Baby Challenge videos that Buzzfeed had, and then went on to watch their other gaming videos. The Almighty Algorithm continued feeding into my new interest, suggesting more Sims 4 content from YouTubers with millions of views like Deligracy and James Turner and LilSimsie (there is an entire Sims YouTube community with more).

You can watch people design and build extravagant houses, do challenges (like the 100 Baby Challenge where you try to have one sim birth and raise 100 babies), create characters and tell stories with those characters.

The limit does not exist. Watching Deligracy—my favorite—create dramatic storylines is akin to watching an adult play Barbies. It’s fascinating, entertaining and definitely one guilty pleasure that is helping me through quarantine.

Asia Morris | What I was hoping, truly hoping, would become a guilty pleasure under stay at home orders quickly turned into a guilty pain, to the tune of my boyfriend walking in on me watching “Love Is Blind” and saying something like, “There’s no way I could watch that” to me.

I told him and more so myself, “It’s about the psychology! It’s an interesting social experiment!”

I really thought I would like “Love is Blind,” but instead felt immediately trapped in a sticky, sweet vat of slow-moving molasses, listening to all the gross things you don’t actually want to know about even your closest friends’ relationships, much less a stranger’s.

So I stopped watching after Episode 6 or 7. Is it important to note I’ve never gotten into nor had the desire to watch The Bachelor? Probably.

At first, I enjoyed the somewhat fascinating, albeit contrived, social experiment. It was fun to think about what relationships would be like if we all had to meet each other blindly, but after all the couples finally did meet, after getting engaged, the show quickly dips into a soap opera-style, slow-paced snooze fest, one where I really started to dislike everything about everyone, and the predictable drama that unfolded as each problematic relationship showed its true colors.

From Cameron’s overbearing displays of affection—like, can Lauren walk through her own apartment without his hand attached to her hip? Careful, Cameron, if you’re not touching some part of your fiancé’s body at all times on camera, she might float away as if none of this were real, oh wait—to Carleton’s insufferable relationship with himself and the pain he projects onto poor Diamond.

Then there’s the field of red flags Mark seemed determined to ignore, perhaps taking the show’s premise a little too seriously—Is love blind? I think Mark may be emotionally blind—and his partner Jessica’s mostly drunken determination to avoid touching the guy at all costs, each time pulling a curtain of hair over her looks of disgust. You can’t hide behind those bleached blond locks forever, Jessica.

However, if I’d been burned by Barnett like she had—“If this place had no other guys, and no other girls, I would propose to you tomorrow.”—I’d want to hide behind my hair, too.

Will Barnett marry the financial train wreck of a fiancé he’s chosen to complement his fiscally, but arguably not emotionally, stable status as a would-be husband? I’m honestly more in love with his dog than anyone on the show. Can we talk about Koda? Now that’s a dream companion, right there. Have I sucked the fun out of this yet?

Will anyone end up happily married? Was this all just a scam? Did you know that two more seasons have been ordered on Netflix? What happens next? I truly don’t care to know, but since my editor asked me to write this, I’ll probably watch the full season, because, work.

All of this is definitely for work. 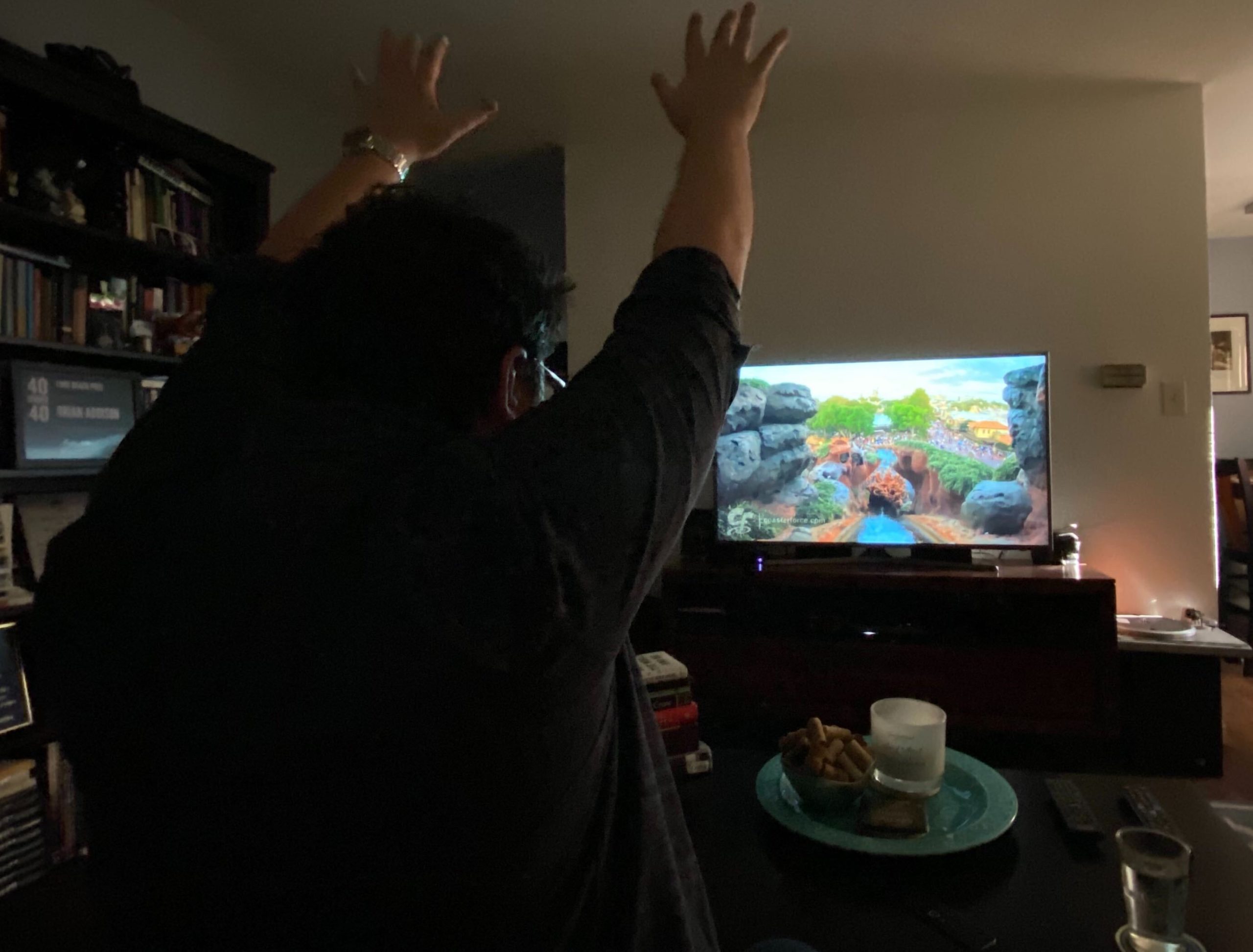 I am a lover of Disneyland and theme parks in general.

A lot of people are shocked when they discover this, largely because they presume me to be pretentious to the extent that I wouldn’t like kitsch, imagination or magic—and they’re damn dead wrong. The Capitalistiest Place on Earth is also one of the most fantastic lessons in everything from crowd control and product marketing to musical theatre and imagineering design.

The Disneyland experience is so perfectly curated, especially if you know your way around the two parks, that there is a reason people throw down over a grand for an annual pass.

When it comes to the theme-dry-but-thrill-high parks like Six Flags, it is all about engineering feats: height, twists, ways to orient (or disorient) the human body as it propels through the air.

Roller coasters are real-life magic as are Disneyland rides. You can tell why people are obsessed—so obsessed that they film rides from across the globe and post them in wonderfully high def (oftentimes 4K now) videos on YouTube.

I can’t help myself… Wheeeeeeeeeee! 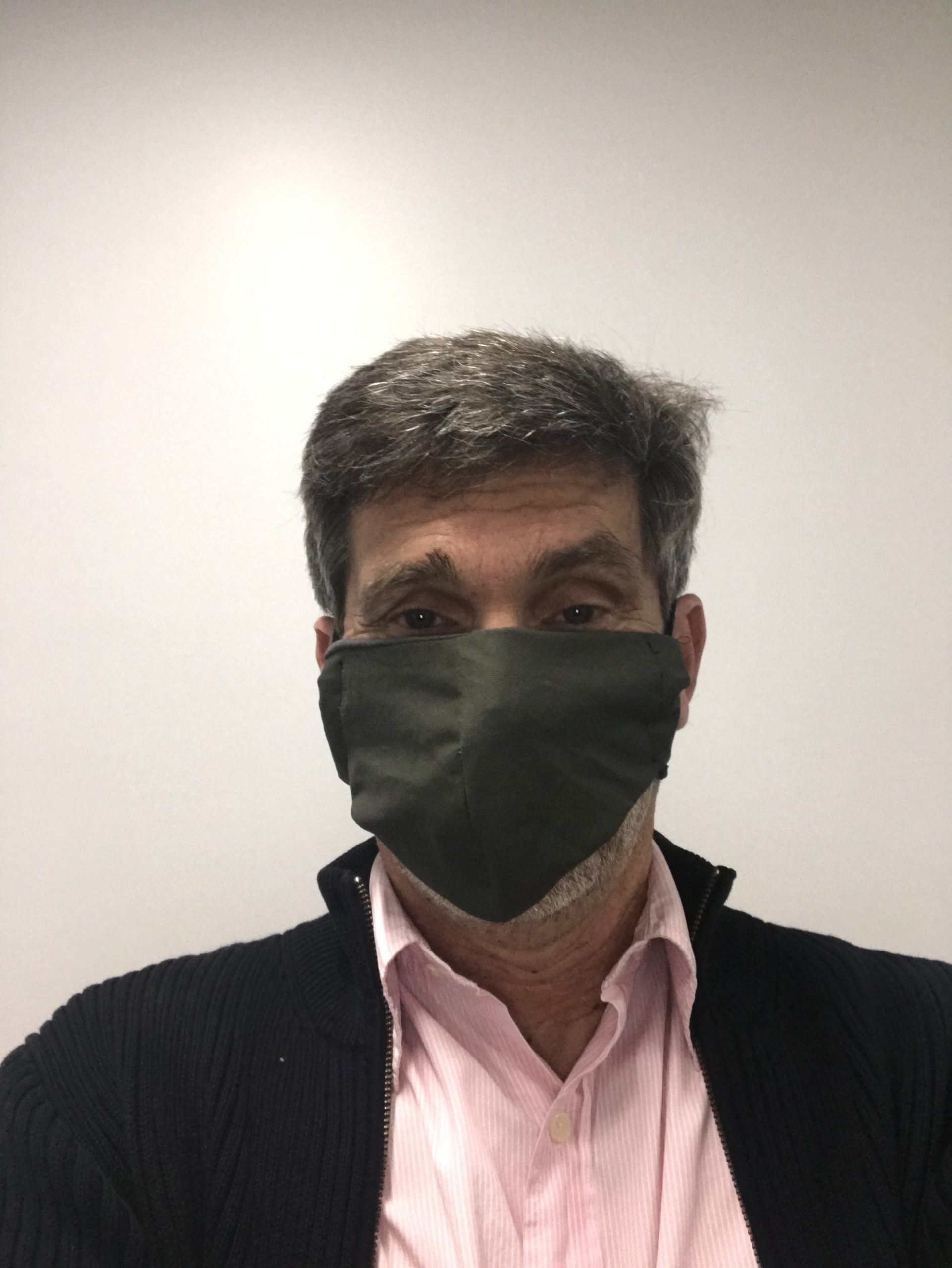 Steve Lowery | I readily admit that I’m a people pleaser.

There are some very real, deep-seated reasons for this that we’re not going to get into and there are some very real journalistic reasons for this, i.e. you people love empathy! Still, whatever the reasons, I spend a good part of my day making people feel good, it’s what I do, and I do a lot of that by smiling and generally using my face to communicate happiness, even if I’m not feeling it.

That’s kind of the definition of a mask, no? So, oh the irony that a mask, a face mask, could liberate me from such machinations.

Now, when walking around, there is no need to smile, to emote, to be anything other than whatever I’m feeling at that moment which is usually, comfortable just being me, flat-faced me, under the mask. I mean, look at me up there. Does it look like I care if you are pleased, people?