Ten new murals now adorn walls on public and private spaces in the city as part of the Long Beach Walls (formerly known as POW! WOW!) mural and sculpture festival, which wrapped up its seventh year in Long Beach on Sunday.

The weeklong art event featured a roster of only female artists—a first for the city’s festival—with local talent and creators from across the country participating.

“Stand Up” was the theme of this year for Long Beach’s participation in the international mural festival, which celebrated the diversity, spirit and vision of women in art. Artists were given complete creative control over what they wanted to paint and the result produced some of the most striking works the festival has seen yet.

Below are before-and-after photos of each of the new murals, with words from some artists describing the inspiration behind their new works. Note: to see the full before-and-after pictures, toggle the slider with your mouse or finger. 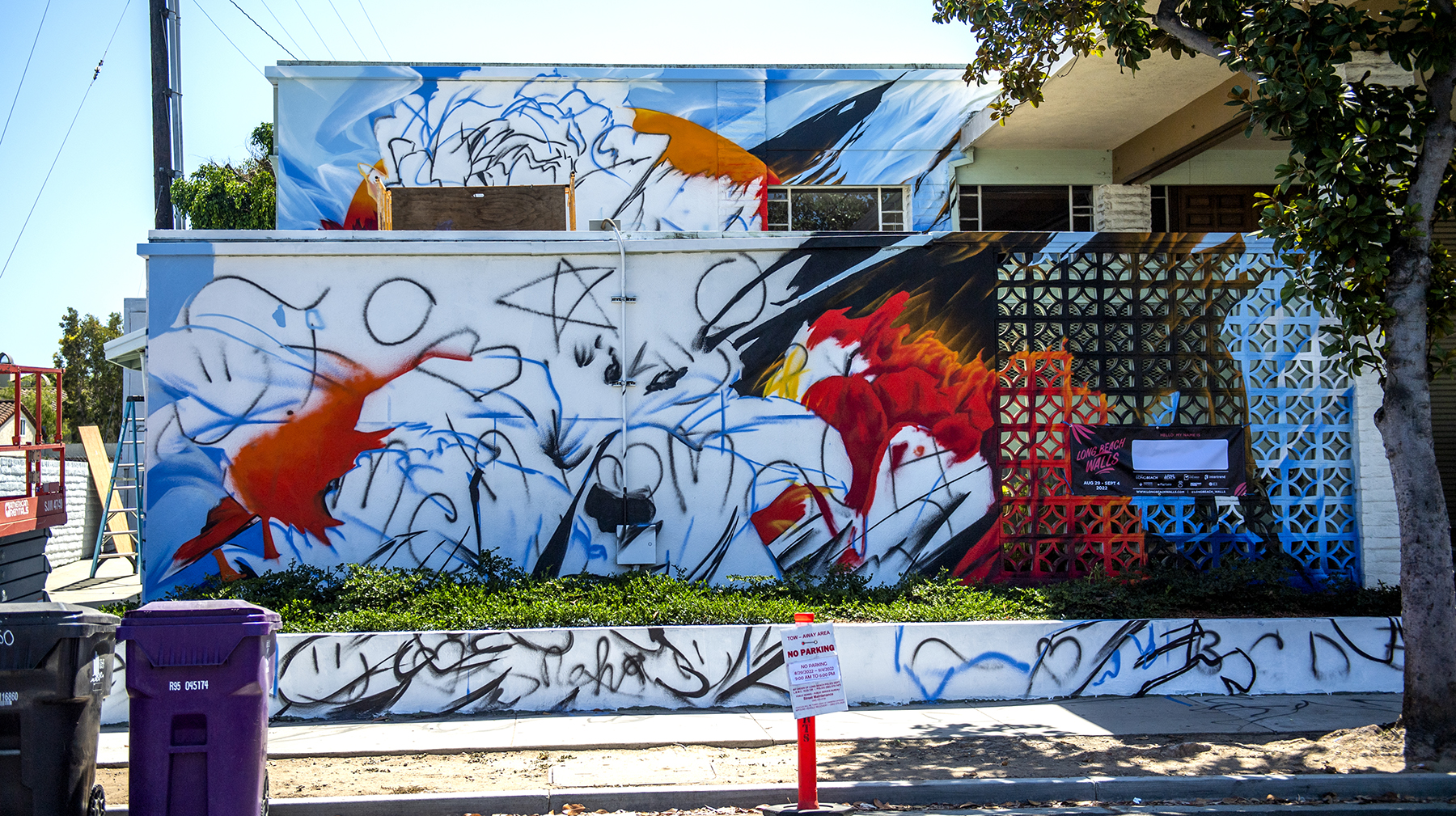 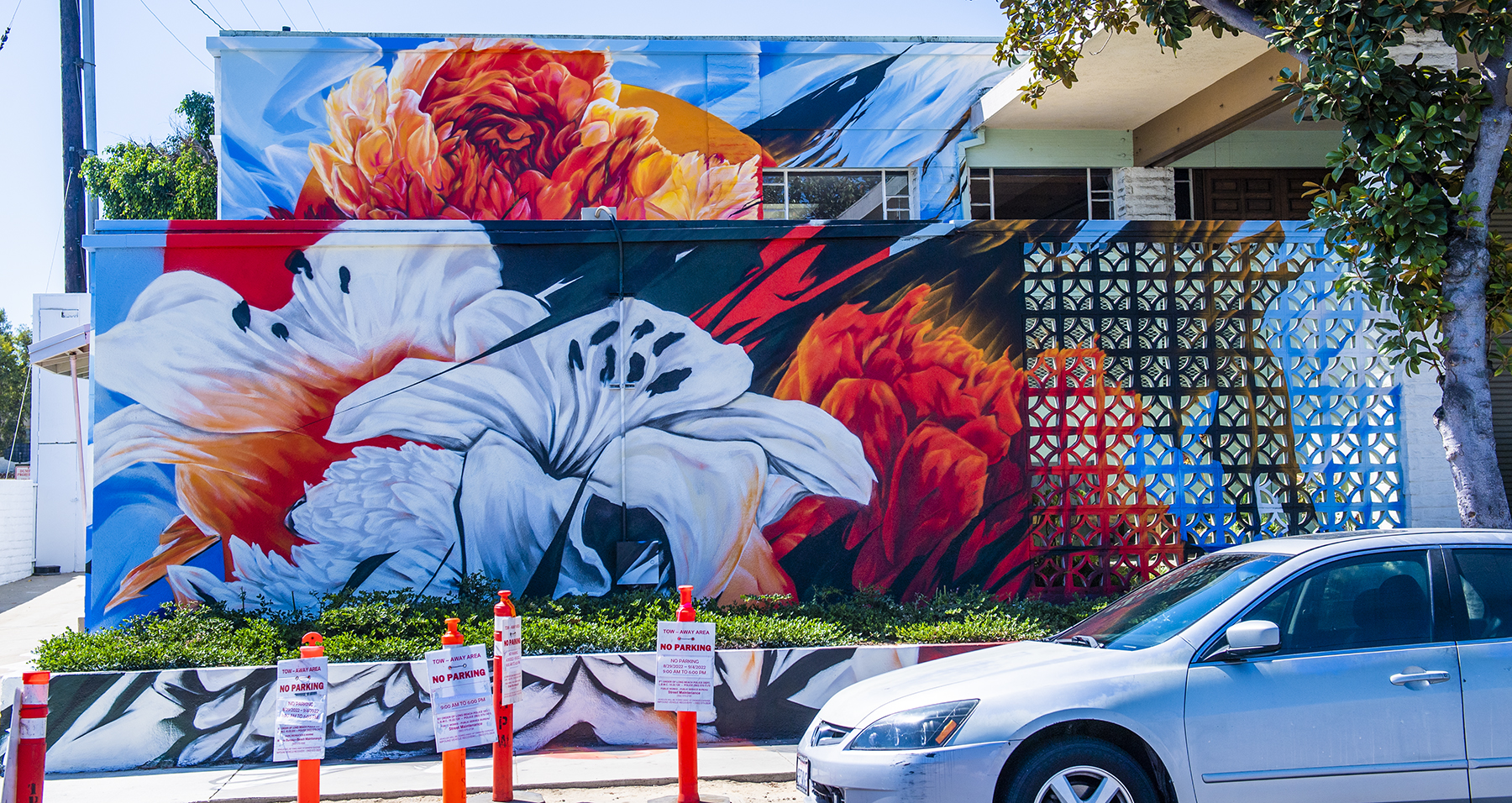 After every mural installation, French said she always leaves free flowers for the community to take and enjoy. “Just so the community members remember and know that it was a labor of love,” she said. 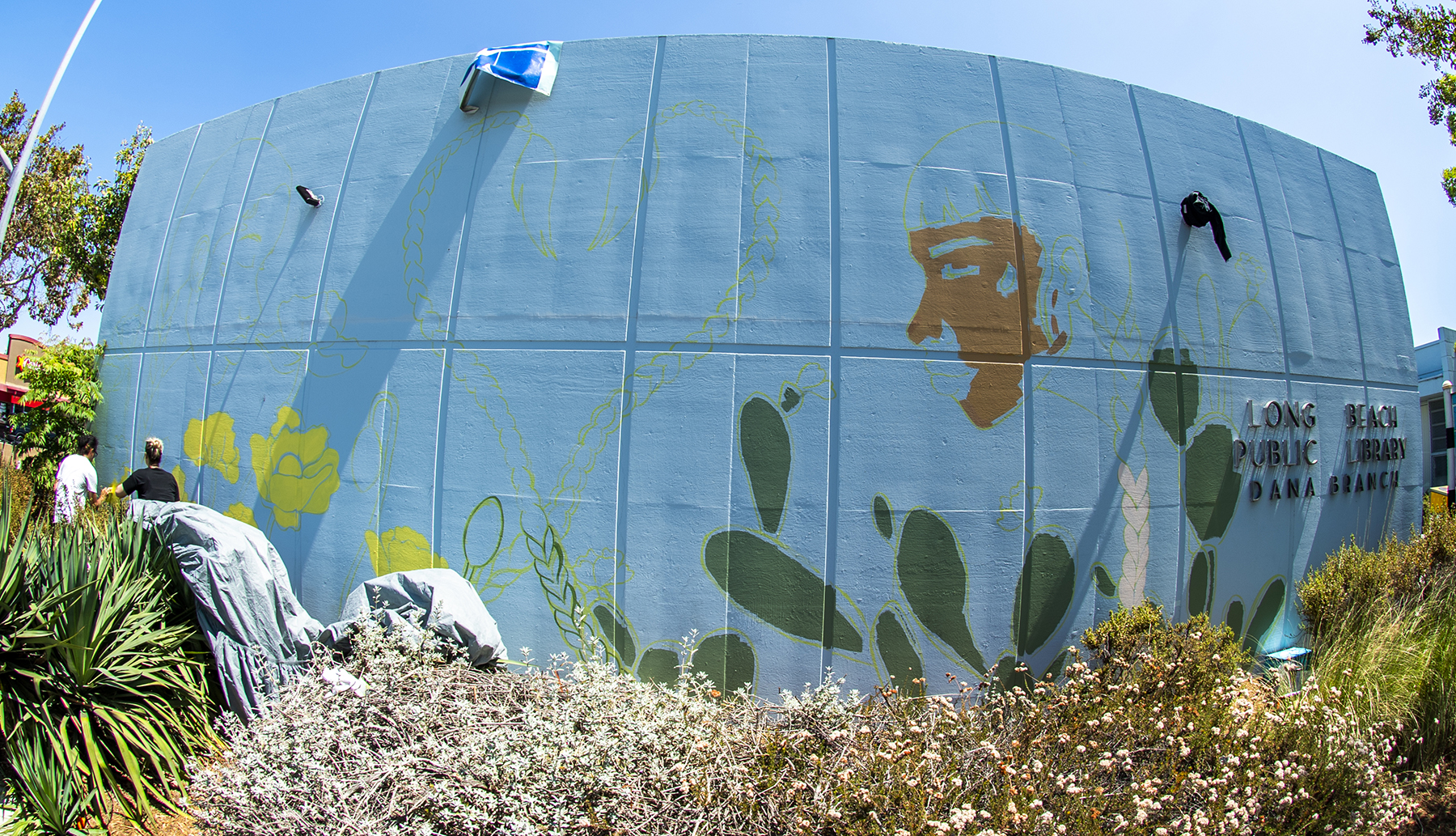 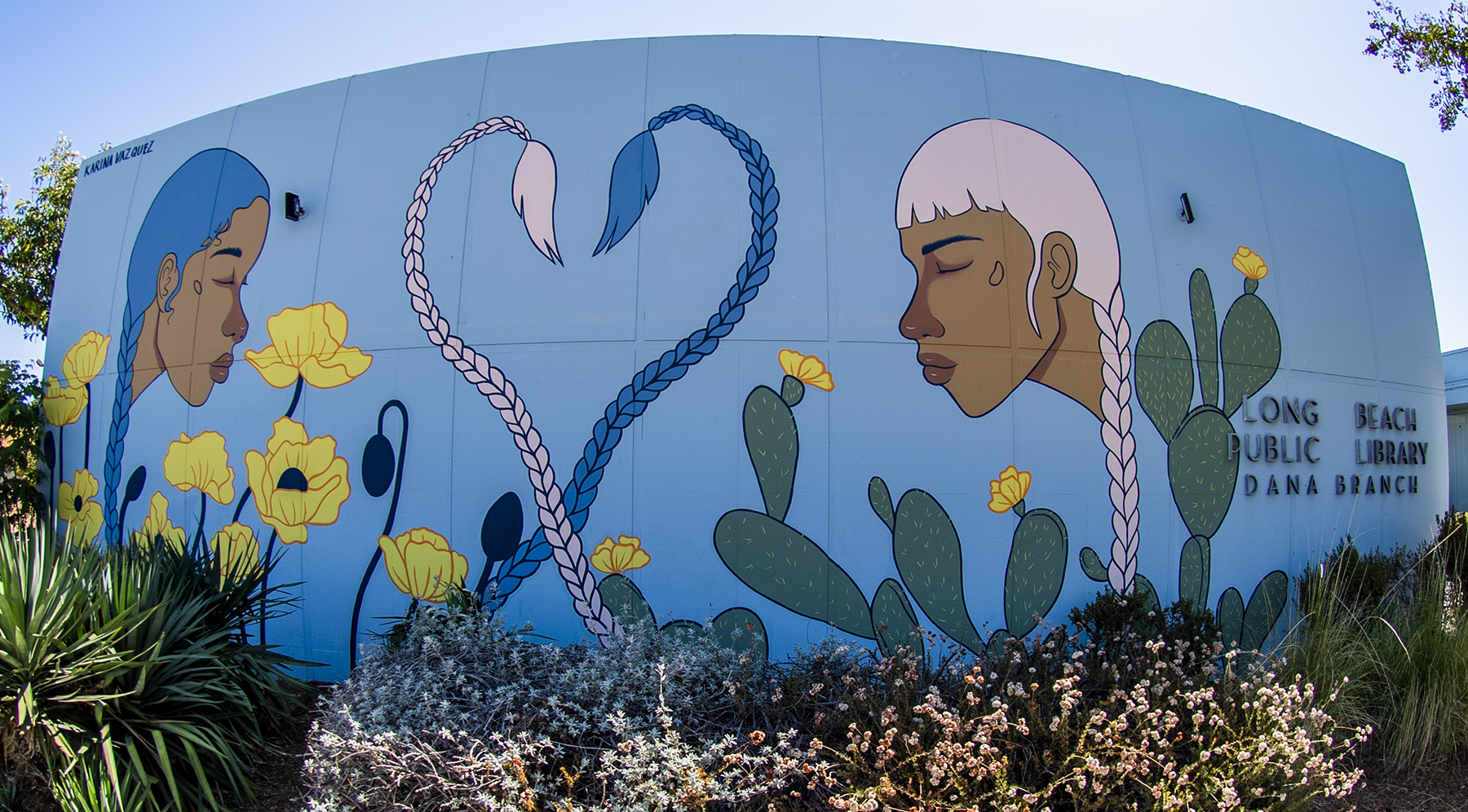 Karina Vazquez is a Mexican-born artist who lives in Long Beach. She’s volunteered for the mural festival in years past, but this year was her first as a featured artist.

Her mural on the front facade of the Dana Neighborhood Library in Bixby Knolls speaks to the strength and love of sisterhood and family despite borders, Vazquez said. The two female figures, and the native plants beneath them, symbolize the generations of immigrants in California and their connection to the families who still reside in Mexico.

“Even though there is distance, there’s still love there,” visualized by the braids meeting in a heart shape, she explained.

Long Beach artist Mer Young’s massive mural towers over the Sewing Seeds of Change garden located in the Willmore area of Long Beach, just across from the Los Angeles River.

Young said she designed her mural to compliment the garden, with palm fronds and other plant imagery.

“Doing this for me, though, was super important because it’s giving back to the community,” Young said. 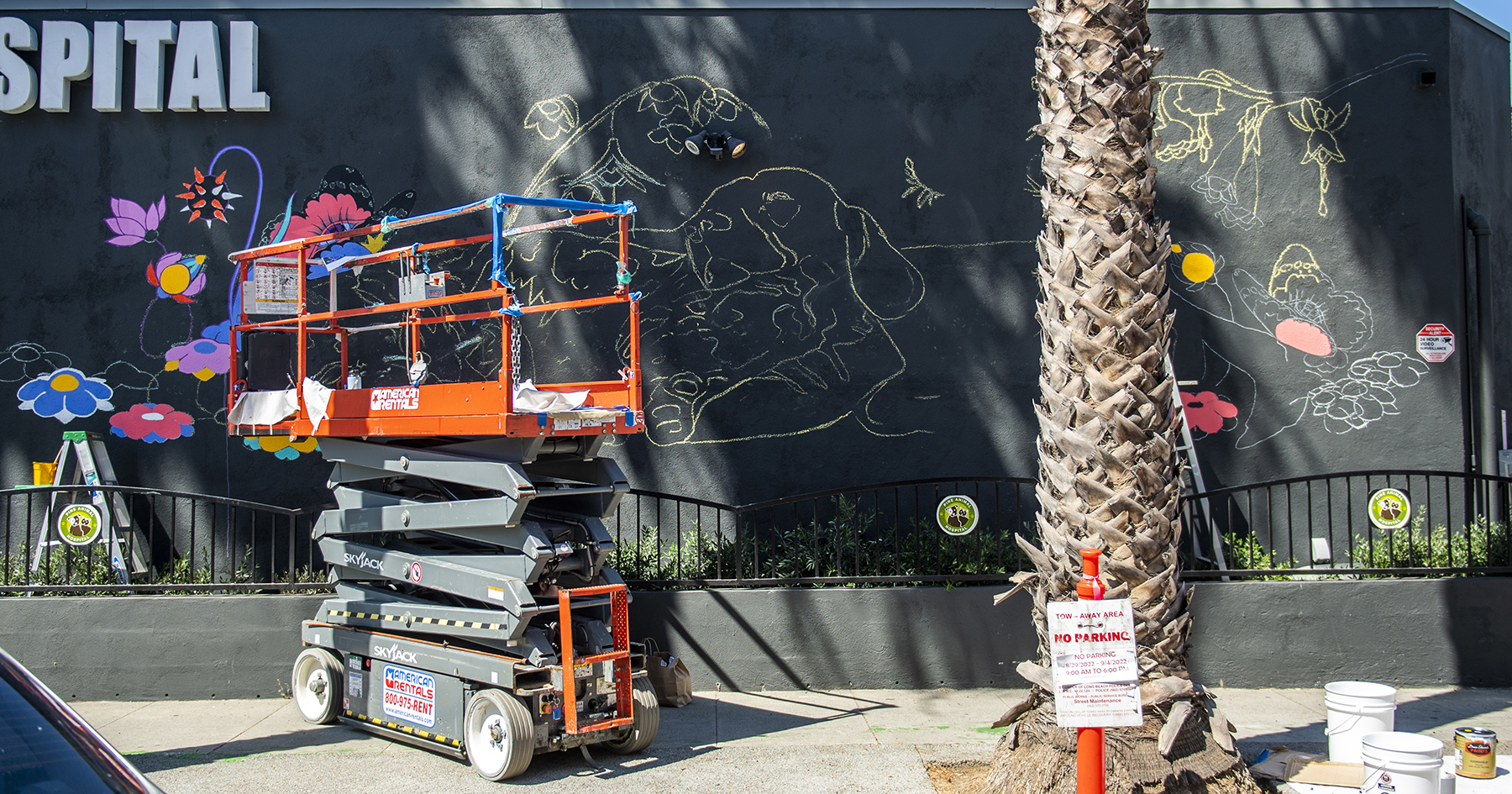 Megan Boterenbrood, known creatively under the moniker Mara Bubblegum, has several murals painted across Long Beach, but this year was also her first Long Beach Walls.

Her piece, she said, was designed to be whimsical and fun, but also compliment the Pine Animal Hospital.

“I just wanted to do something that was fun and cute, something to kind of liven up the wall,” she said. 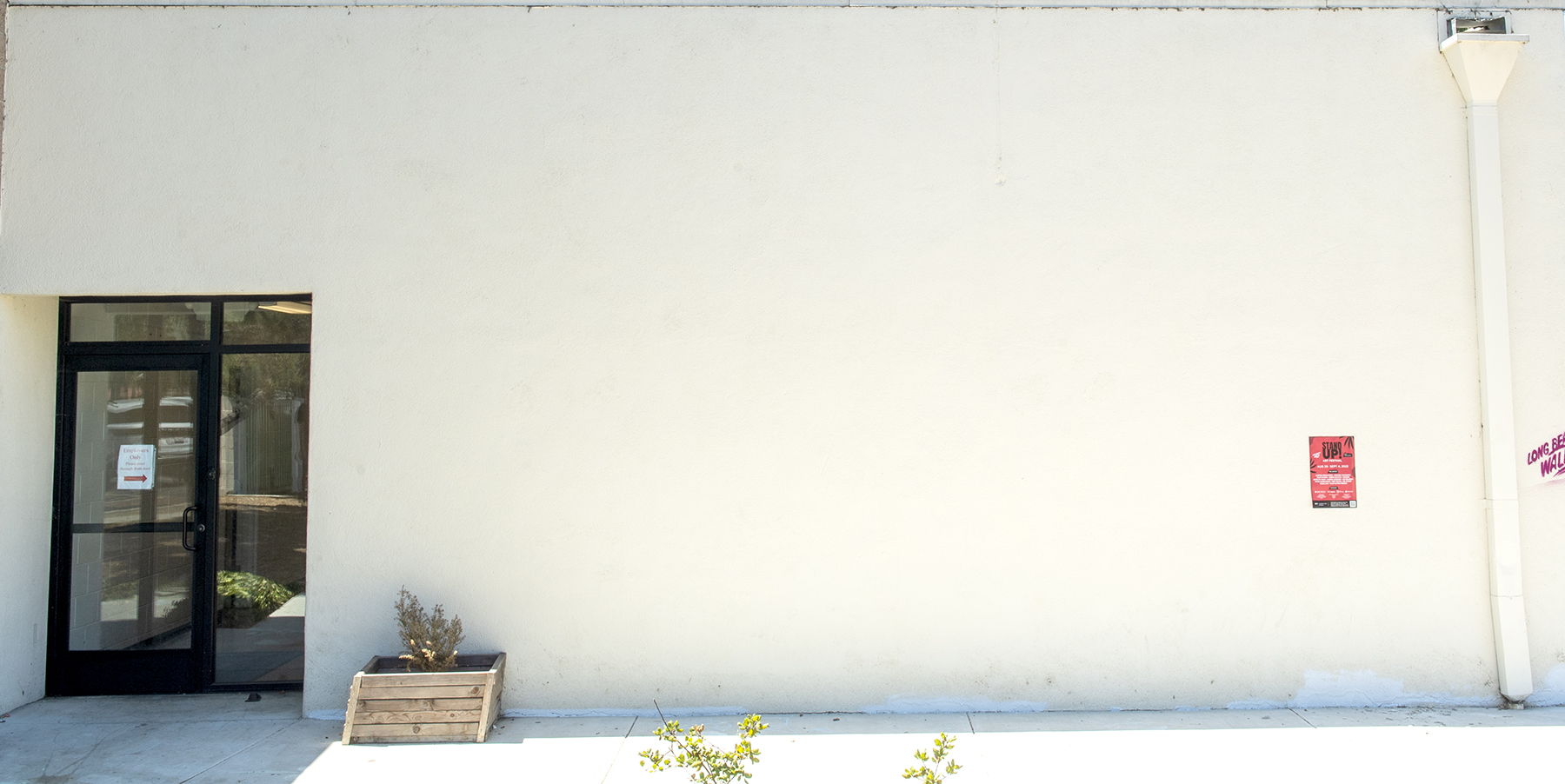 Anat Ronen is an Israeli-born artist who resides in Houston. The self-taught artist’s murals and street art can be found in public spaces across the globe.

Her mural at the Boys & Girls Club in Bixby Knolls is designed to make the building look as though it were made out of LEGOs, reflecting the spirit and playfulness of the children who visit every day.

The work of Los Angeles-based artist Michelle Ruby, also known as Mr. B. Baby, is heavily influenced by her Puerto Rican and Mexican heritage and explores the relationship between Mexican folk art and children’s books.

She said her mural for Long Beach Walls at Studio One Eleven in Downtown is an “emotional piece” depicting her signature character, a colorful beast named Chucho, crying amidst destruction. 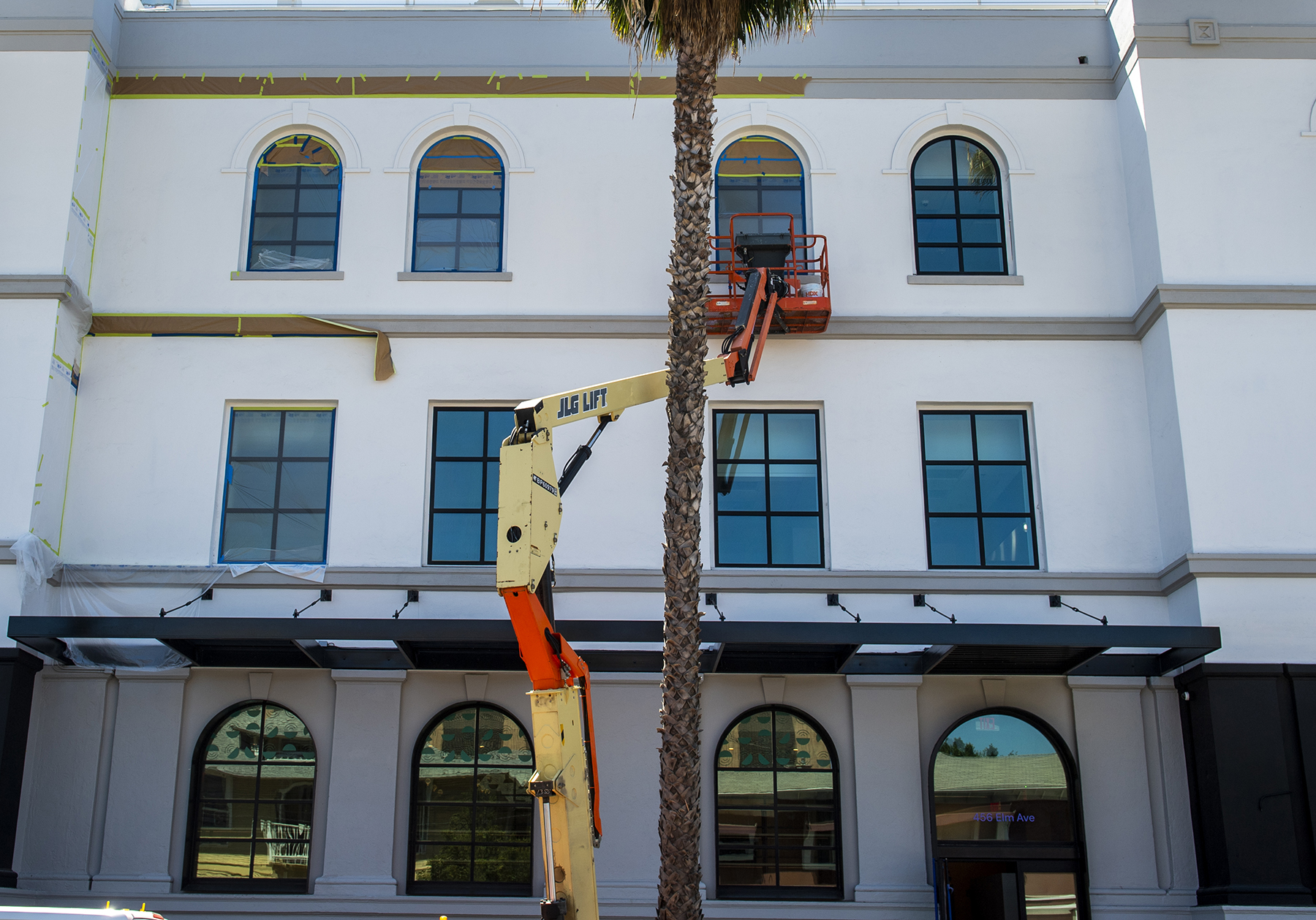 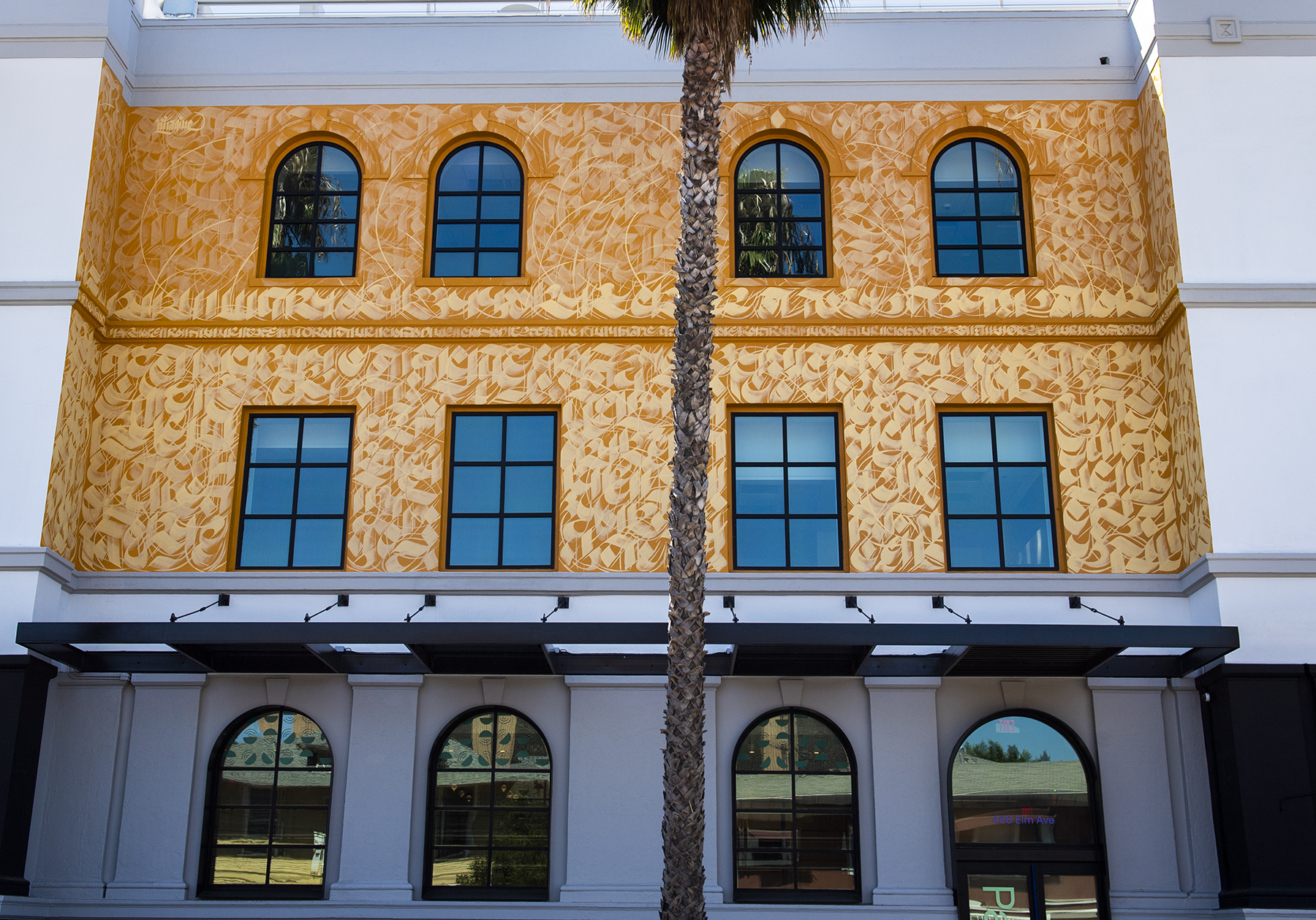 Sneha Shrestha is a Nepali-born artist who works under the moniker Imagine. Her mural at Partake Collective in Downtown features her signature style, which incorporates her native language and Sanskrit scriptures.

Long Beach artist Alepsis Hernandez said her mural on Daisy Diner symbolizes creative and personal struggle, “the hot and cold moves that we go through,” she said.

Hernandez is also an artist who uses her work to uplift and strengthen the Long Beach community. Her female portraits always feature another Long Beach artist or creative. 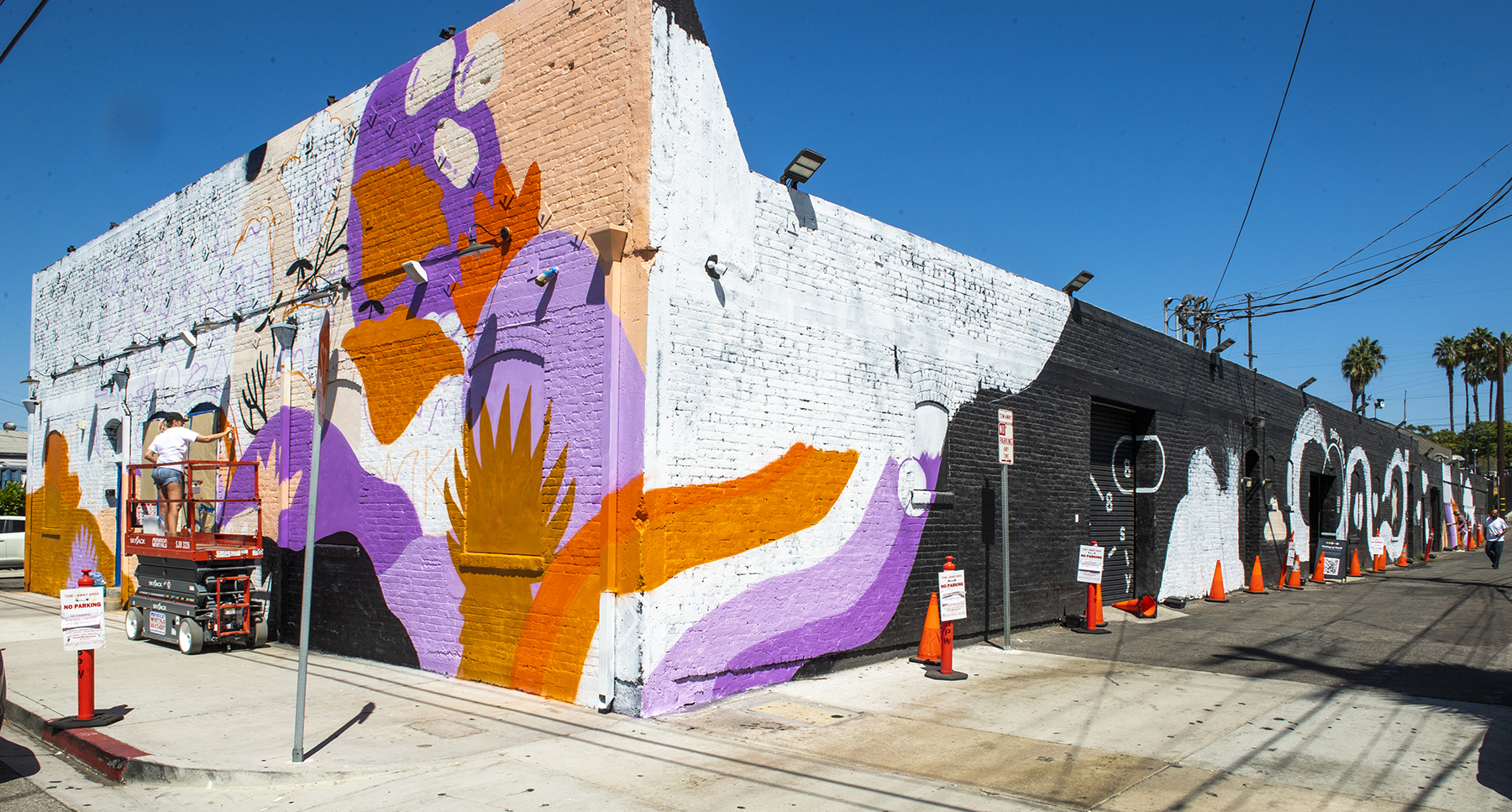 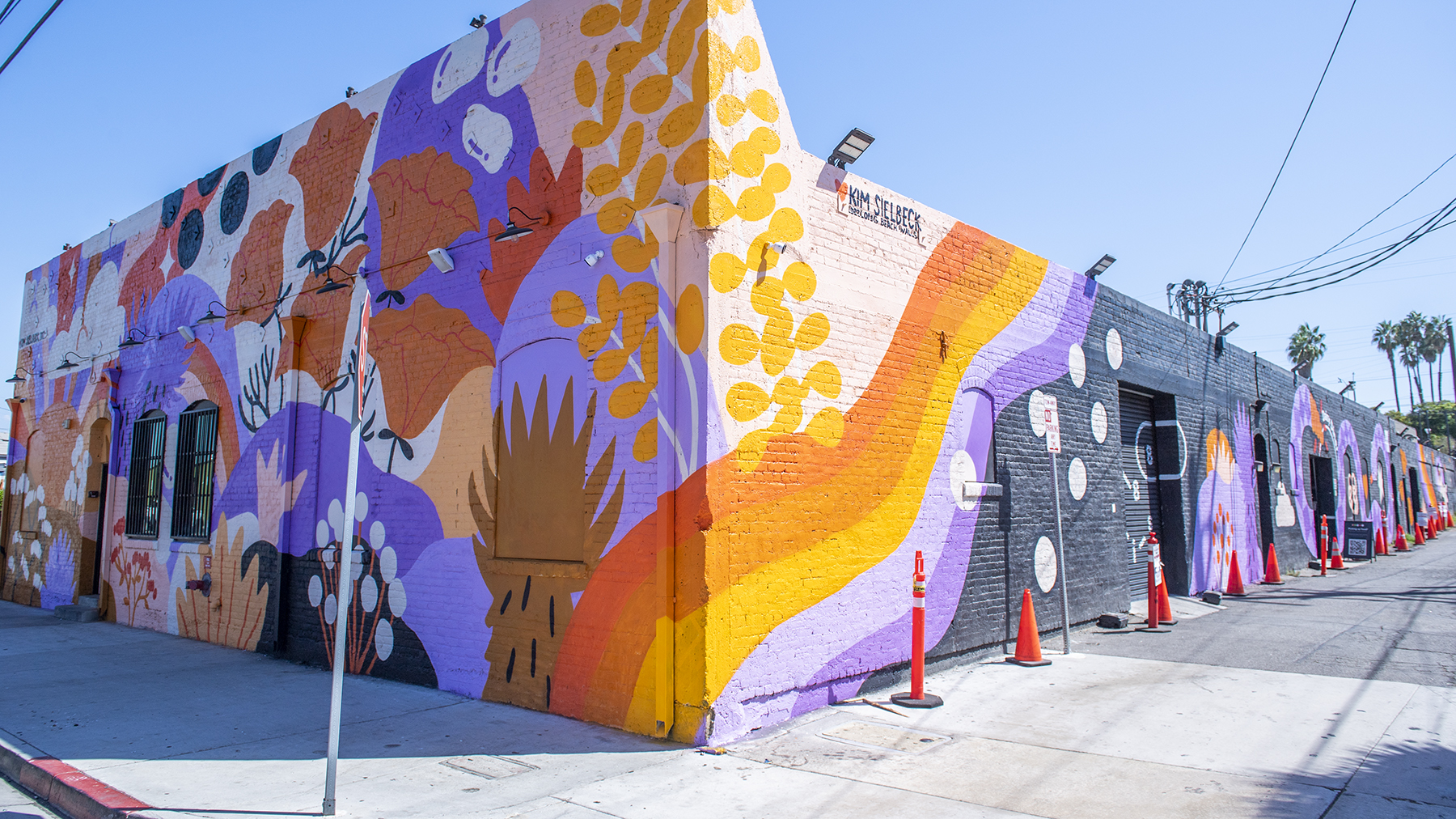 Much of artist Kim Sielbecks art is influenced by where she’s lived. As a child it was Hawaii; then she moved to New York City. Now living in Antelope Valley, California, the artist incorporates the native landscape of the desert into her works, which is what she went for with her mural at Daisy Diner.

“I wanted to do something to capture the spirit of the Southern California landscape. I included Joshua trees and some poppies in there,” she said.

Jocelyn Tsaih is a Taiwan-born and Shanghai-raised artist who lives in Oakland. For her first Long Beach Walls feature, she used bright flowers and her signature amorphous characters to brighten the Bret Harte Neighborhood Library in West Long Beach.

“I wanted to do something that was uplifting,” she explained. “A lot of my mural work is playful and colorful. I want it to be eye-catching and for people to feel good.”