Cristina Salvador Klenz was 20 years old and visiting her grandmother in Portugal for the summer when she first encountered the Romani people.

A college student and an aspiring photojournalist, Klenz’s curiosity was immediately ignited about the people her grandmother called “ciganos,” Portuguese for “gypsies,” who were living in a roadside encampment along the western coast.

Living without electricity and running water, as Klenz peered inside the shacks they lived in, she could see only blankets on a dirt floor.

“The people were so beautiful, and I just couldn’t believe the conditions they were living in,” said Klenz.

Throughout the summer, she visited the camp, as her interest in the Romani people grew.

After returning to the United States, her grandmother informed her that they were gone. Saddened by the news but undeterred, Klenz decided to create a photo essay illuminating the lives of the Romani people in the United States.

A few years later, in 1989, Klenz relocated to California, after she was hired as a photojournalist by the Press-Telegram.

As Klenz came to discover, most Romanis separated themselves for good reason. As an ethnic group driven from India over 1,000 years ago, after generations of enslavement, dehumanization and being ostracized, many choose seclusion over being subject to further prejudice, sometimes claiming to be Hispanic or Lebanese to outsiders.

When a colleague was finally able to connect Klenz to a Romani family, they declined to be photographed, citing concerns over stereotypical media portrayals of them as criminals or con artists and even witches.

But, Klenz was one step closer to her breakthrough.

After the Los Angeles Times published a story about a music store that carried Romani music, Klenz seized her moment, securing an invitation to a wedding through the store’s owner. 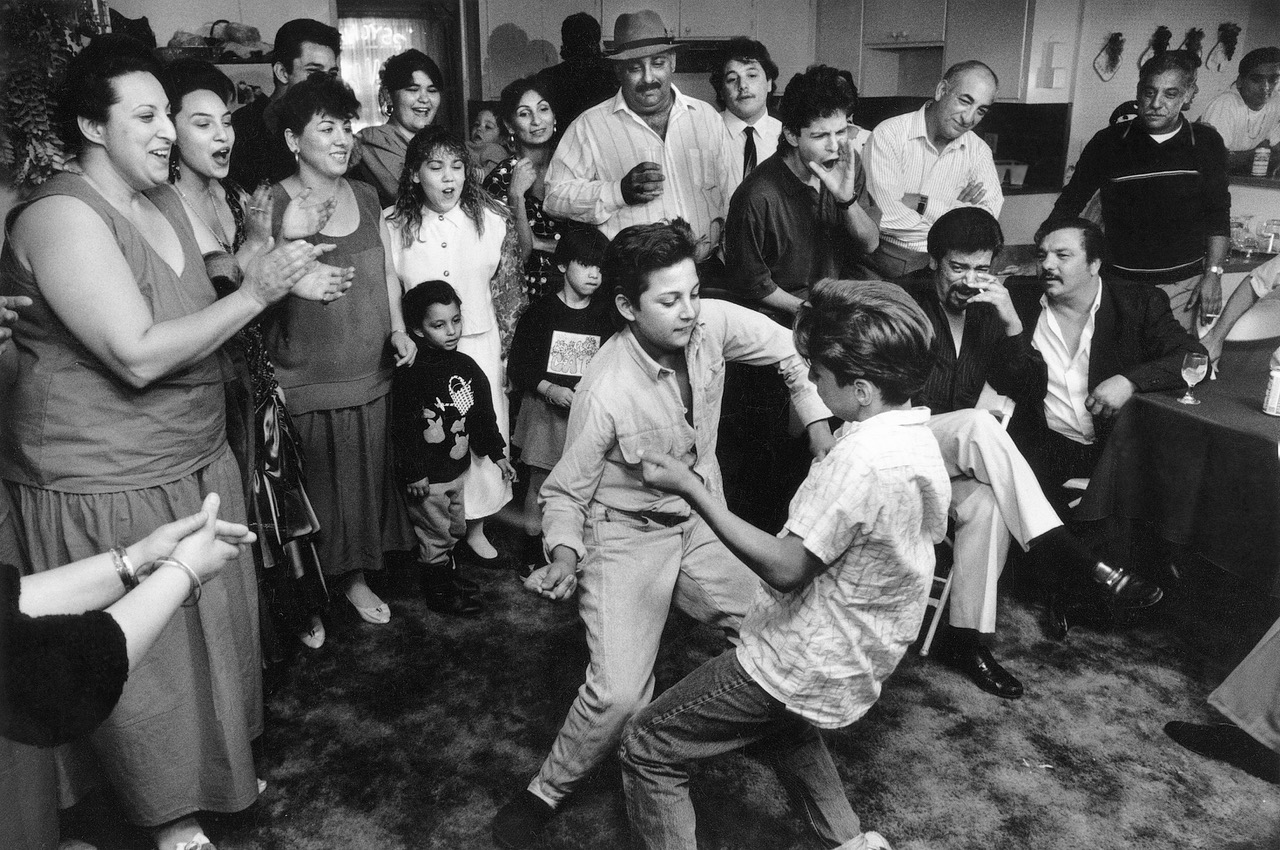 Boys of the Machvaya nation dance at a tomnyála, or engagement party in North Hollywood in 1991. The 14-year-old bride-to-be is pictured second from left. Photo by Cristina Salvador Klenz

While this time, the attendees agreed to be photographed but refused to be in the book that Klenz hoped to create, but Klenz didn’t let this discourage her, organizing the photos into a sketchbook, and using it to approach other Romani families.

“I had something to show them, that I had already been in touch with other people in the culture, so that did help me establish trust,” said Klenz.

From there, while she continued to encounter occasional access issues, particularly with events—once, she was kicked out because she was wearing pants—the photo essay that Klenz had envisioned for years began to develop.

Klenz found herself dedicating more and more time to the Romani families she connected with, becoming immersed in their home lives, their celebrations and tragedies, taking her camera along each step of the way.

Her time with her subjects varied; some she spent a few hours with, one family she stayed with for three weeks.

“Every holiday, every vacation day, every lunch hour, I spent with the Romanis,” said Klenz. “Sometimes I would work my nine-hour shifts, and I would drive 50 miles to the Valley, photograph an event, and drive 50 miles back home.”

After three years of juggling her full-time newspaper position with California’s Roma families, Klenz decided to leave the Press-Telegram.

Living in a cramped apartment with her kitchen serving as a darkroom, Klenz dedicated herself entirely to the project, while earning a couple of grants and pursuing freelance work to pay the bills.

“It was scary giving up the opportunity of being a photojournalist, because I might never get another newspaper job,” said Klenz. “It was kind of a lonely time, because it was just the Romanis and my photography.” 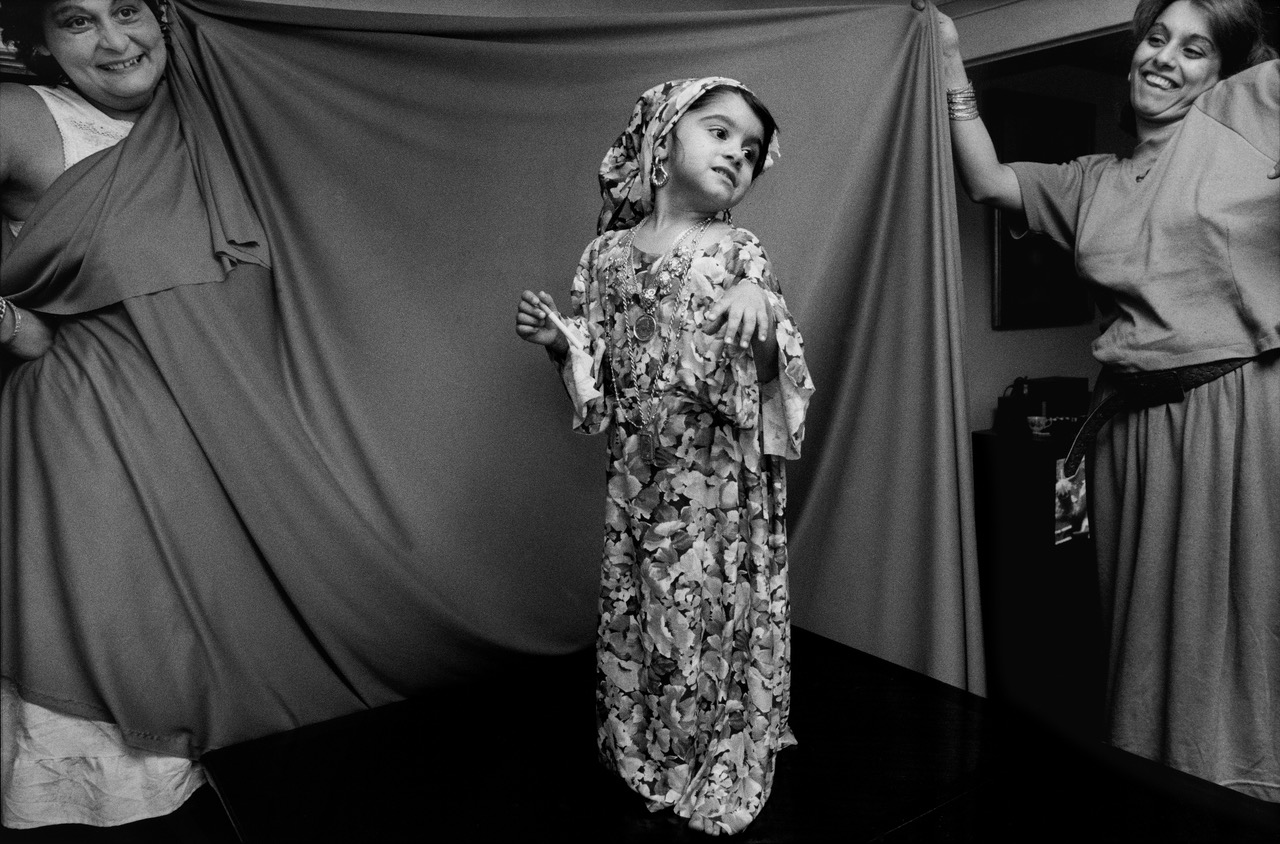 Proud of their roots, a mother and aunt of the Kalderash nation turn young Susie into a “Gypsy woman” by outfitting her in family heirlooms and colorful material. She holds a cigarette for effect. The photo was taken in Long Beach in 1990. Photo by Cristina Salvador Klenz.

Klenz’s insight into an intensely private group’s lives deepened, illuminating the struggles and effects of long-term oppression through her photography.

In 1968, Josef Koudelka documented the European Romani experience in the photo essay, “Gypsies,” but never before had there been a book published about the American Roma, and certainly not about the California Roma.

According to Klenz, the subjects she photographed didn’t believe a book would ever be published.

“They told me that nobody’s interested in us,” she said.

When Klenz was ready to publish her work, she was unable to find a publisher who aligned with her vision for the book.

“I think I reached out to at least 200 publishers, and I couldn’t find one, so I just dropped the project and I had to go on with my life,” Klenz said.

It wasn’t until nearly 30 years later, during the pandemic, that Klenz revisited her more than 10 binders filled with film.

Through rediscovering photos she hadn’t noticed the first time around, such as “Heels,” and “Brothers,” the image that became the book’s cover, Klenz was re-inspired to pursue publication, and she connected with Brown Paper Press, a Long Beach-based publication house that honored her vision.

On April 5, “Hidden: Life with California’s Roma Families,” a collection of 120 black-and-white photographs shot on 35mm film predominantly in Southern California and featuring several Long Beach families, was released, marking a dream for Klenz finally coming into fruition, and a door opening into the lives of California’s secluded Romani population.

Opening with a forward by Romani scholar Ian Hancock, and an introduction by Klenz and publisher Wendy Thomas Russell (also a former journalist at the Press-Telegram), viewers are guided through an intimate portrayal of the close-knit family structures that define Romani communities.

“It’s good that it took so long to finally publish this book, because we grow as people as human beings through our life experiences and it changes our perspective,” said Klenz. “Photographs ripen with age, and they become more precious once we look back at them.” 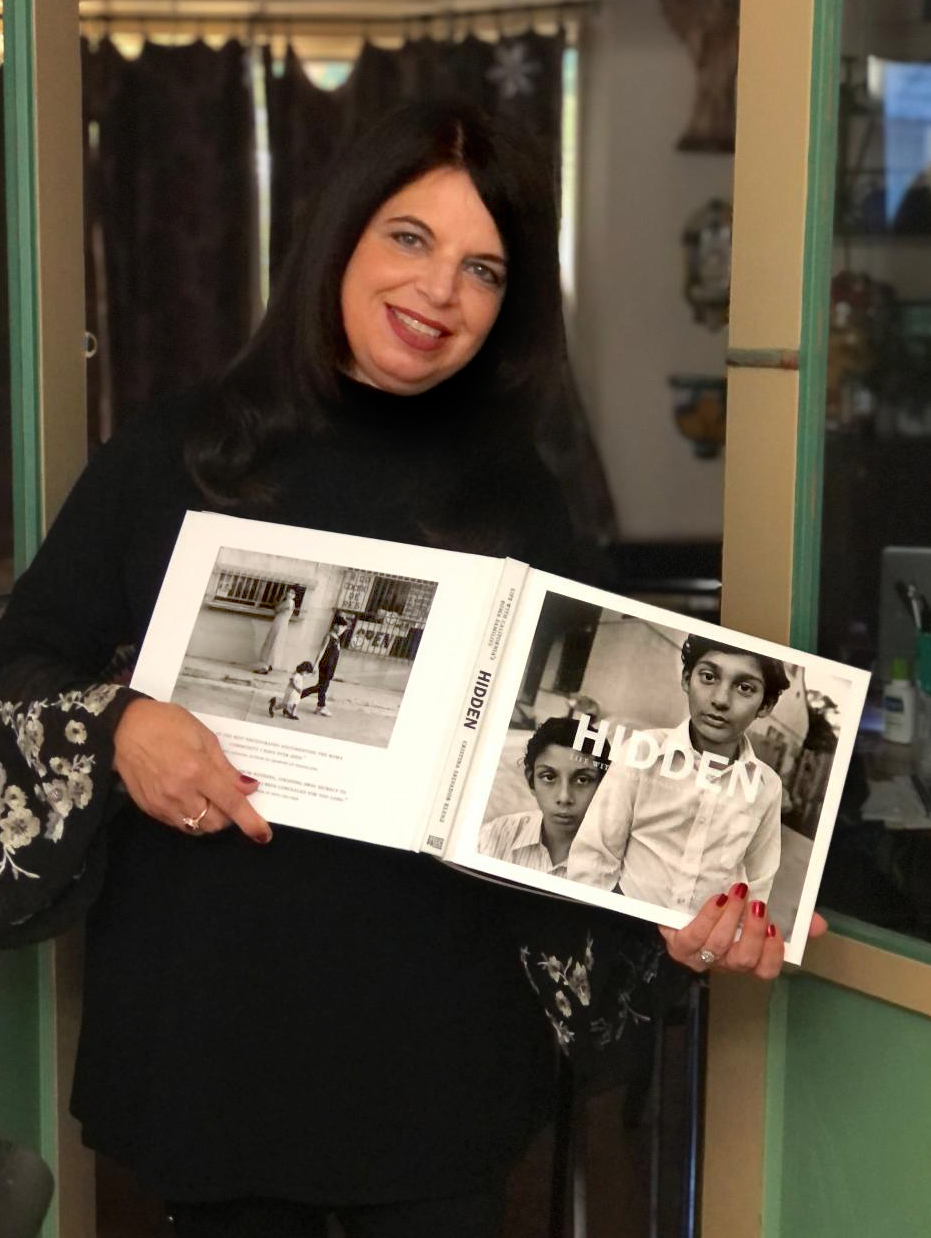 Emulating the life cycle, the photos flow through joyful celebrations of birthday parties and weddings, and sorrowful moments of illness and of anger, offering glimpses into the cultural traditions of five Romani nations.

While some common ancient customs are shared among the different nations, each nation is shaped by its own unique history, with its own dialect, geographic roots and practices.

“It was always a very fine line between taking too many pictures and not taking enough, just being able to read the situation and knowing how many pictures you can take without being too intrusive,” said Klenz.

She recalled the image, “Prayer Group,” in 1991, when she drove to Santa Ana to document a woman of the Mihais nation, a subset of the Kalderash nation.

“I remember thinking, I don’t want to be too intrusive, but I want to take these pictures, and I stopped for a little bit and the women said no, you can take as many pictures as you want,” said Klenz. “At the end, they prayed for me in Spanish, and they prayed for the success of my book.”

The next week when Klenz returned, she was told that the head of the Romani church said she wasn’t permitted to take any more photos.

“I was very grateful that I did get to take the pictures that one time and I took as many as I wanted, because then I wasn’t allowed back anymore,” she said.

Klenz hopes that viewers will gain a deeper understanding not only of the Romani culture, but how poverty and discrimination throughout centuries play a role today.

Most of the people Klenz photographed had only a first-grade education and were illiterate. While some photos show children smoking and teenagers marrying and becoming parents, others highlight the bonds of family and community.

“At first I really just wanted to document the culture and the traditions, but then I started to see some of the difficulties that people were having, but still that the people maintain their resiliency, their sense of humor and their passion for life, even though they encountered all these hardships,” she said.

Klenz considers her time with the California Roma to be insight into a different side of humanity, and a lesson on community.

“We’re all tribal people,” said Klenz. “It’s difficult to understand that when you live in a modern world, but that’s where we all came from, those are our tribal roots, and I think the Romani people really represent the essence of humanity.” 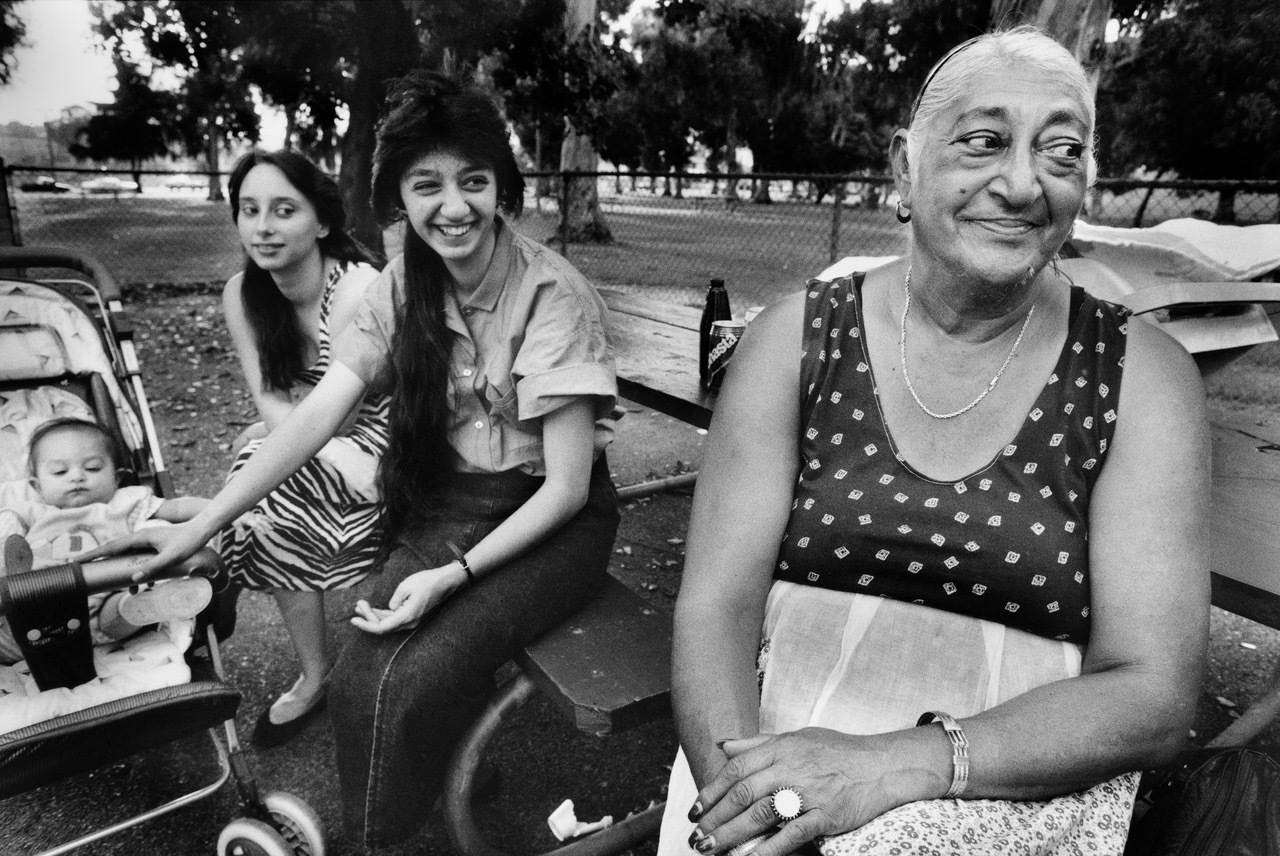 This photo was taken at Recreation Park on Seventh Street during a birthday party in 1990. The women represent the Kalderash and Machvaya nations of Roma. Photo by Cristina Salvador Klenz.

While “Hidden” has been years in the making, and Klenz is certainly excited for its release, the experience has been bittersweet.

With many of the Roma families moving frequently, sometimes out of state, Klenz had fallen out of touch with many people over the years, although she has recently reconnected with some through social media.

It has been particularly difficult for Klenz to discover that many of the people she photographed, including children, have died.

“I’m grateful that the project is getting out there and that people will learn more about the Romani culture, but my heart is breaking,” said Klenz. “The problem still continues, so it’s difficult for me to understand what they go through and why they have so many hardships still.”

Klenz hopes to receive a grant and follow up with everybody in “Hidden,” specifically to document the health struggles facing the Romani people.

Klenz is ready to return to the families she once knew so intimately, and continue uncovering the people who remain a mystery to most.

“I’ve been a mom for the last almost 20 years, so I’ve really devoted this time to my children and my children are growing up,” said Klenz. “I want to fill my empty nest with continuing to document the project.”

Join Klenz on Thursday, April 7, at Page Against the Machine Books, from 7 to 9 p.m. for a discussion, book signing, and photography exhibition. A selection of prints will also be available for sale. The event is free of charge, and no reservation or tickets are required.

Page Against the Machine Books is located at 2714 E. Fourth St.

On Saturday, May 7, attend a book signing at Iguana Imports from 1 to 4 p.m. Framed and unframed prints will also be available for sale. Iguana Imports is located at 3440 E. Broadway.