'It's kind of a mad dash': Restaurants scramble to reopen outdoor dining • the Hi-lo
- ADVERTISEMENT -

It’s nearly 1 o’clock and Sean Flynn, director of operations at Shannon’s on Pine Avenue, is sitting at the bar top, his laptop open in front of him, repeatedly hitting the refresh button on the city’s website.

“I’m waiting for the protocol order to come,” Flynn said. “The city said last night that they would be sending something today and it’s 12:43.”

After the city announced Monday that restaurants may resume outdoor dining, following Gov. Gavin Newsom’s lifting of California’s strict stay-at-home order issued just before Thanksgiving, Shannon’s, like other restaurants in the city eager to resume outdoor dining, saw its first round of customers seated outside. But with less than a day’s notice to reopen, management is scrambling to pinpoint in exactly what capacity they’re allowed to do so.

“Right now it’s just kind of a mad dash to see what we can do,” Flynn said.

So far the city has stated that restaurants may resume outdoor dining with strict seating restrictions, requiring diners to sit 8 feet apart instead of 6 feet. Flynn said the city had given this same direction to restaurants about a week or two before Thanksgiving, which Flynn said effectively eliminated about 30% of their patio seating.

Shannon’s had relegated its service to takeout and delivery service since November, which Flynn said put the restaurant in a more favorable position to reopen today—they had the necessary staff and food to accommodate in-person dining—but they were still ironing out the kinks as far as any additional health and safety protocol that may come from the city. 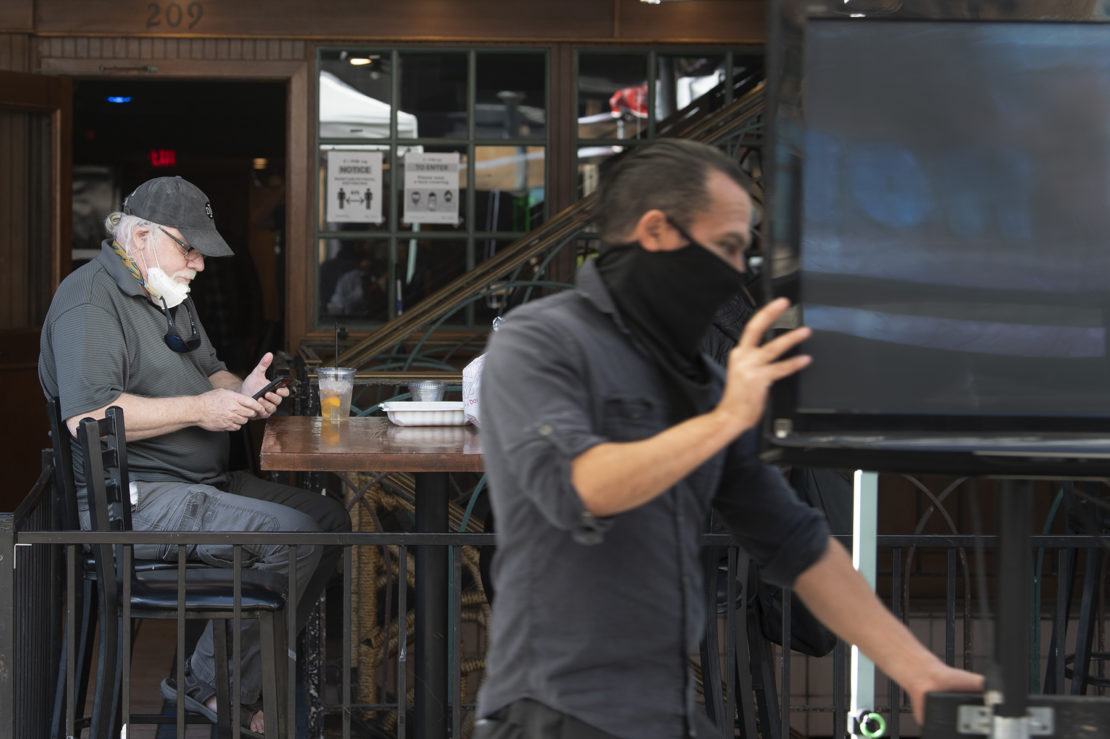 Employees roll out a television as they clean and set up the parklet while Jim Grce, a self-proclaimed regular at Shannon’s On Pine, enjoys his food and drink. Restaurants are allowed to open outdoor dining in Long Beach Tuesday, January 26, 2021. Photo by Thomas R. Cordova.

“I’m going by the old-school rules we had prior to shutdown,” David Kannenberg, general manager at George’s Greek Cafe on Pine, said. “The second [Newsom’s] newscast ended we were getting calls from people asking if we were open now.”

Kannenberg said he and his staff were working late Monday night until the early morning to get their restaurant ready for outdoor service Tuesday. Like Shannon’s, George’s was operating under a takeout and delivery model, so the majority of their efforts centered on setting up the patio space and organizing health and safety protocols.

“Going from yesterday to today was just a handful,” Kannenberg said, but added that it “felt terrific” to be open.

Ciaran Gough, president of the Long Beach Restaurant Association said it’s a good thing the city is allowing restaurants to reopen, but said it’s nearly impossible, with few exceptions, for a restaurant that has been adhering to strict guidelines to reopen on less than a day’s notice.

“It’s like reopening [a new] restaurant again,” John Morris, owner of Boathouse on the Bay said. “They give us one day’s notice and then here you go.”

Morris said it wouldn’t have been possible to reopen Tuesday even if he had wanted to. He’ll be spending the next few days bringing back and re-training all 80 of his employees, restocking the menu, and cleaning up the patio space on the waterfront, just to meet tentative plans to reopen over the weekend.

Denny Lund, owner of popular breakfast spot Schooner or Later on the Alamitos Bay Marina as well as Tantalum at Marina Pacifica, said he’s starting the process of hiring back 135 employees between the two restaurants in addition to prepping the spaces in accordance with health and safety standards.

“The question [of reopening] is a little uncertain at this point,” Lund said. “My general feeling is that most people are really craving coming back to work. We could be ready to open Friday if we wanted to.”

Brandon Richardson contributed to this report.