Side streEATS is a monthly multimedia series by Long Beach Post staff that aims to highlight unique food businesses across the city. To contact us, email Visuals Editor Thomas R. Cordova at [email protected].

It’s Friday at Appu’s Cafe and Vinod Venkataraman is in the throes of a late morning rush. Under fluorescent lights, the former physician and current chef zigs back and forth between the confines of his narrow kitchen, a cozy cafeteria-styled room that once housed thousands of his patient’s medical charts when he was a practicing cognitive neurologist years ago.

Venkatamaran has worn many hats, or coats throughout his life. A professor of music at 19. A world-traveled musician through his twenties. A father, physician, and now, at 56, a retired physician-turned-chef at Appu’s Cafe, an Indian-Mexican vegetarian restaurant tucked away inside the somewhat nondescript Woodruff Medical Center.

In this latest phase of his working life, Venkataraman proudly shares his passion for healthy vegetarian cuisine, an art, he says, he’s honed over decades traveling abroad, cooking for himself and his friends and family.

“Hunger is the best motivation,” Venkataraman said from behind the counter. “I’ve never eaten anything that’s talked, walked, crawled or had a heart. And so for me, it has always been a lifetime search and quest for trying to find good food. Learning to cook was the natural way of making good food for my stomach.”

When Venkataraman migrated from his native India to the U.S. in 1986 to teach music at San Diego State University, he learned very quickly that America was not the land of opportunity for the vegetarian eater. Although he’d been cooking all his life, in the U.S. it became essential, doubly so when his career as a mridangam percussionist with the Ravi Shankar Music Circle took off shortly after.

“Whenever I went on international travel, I always had these little cups with me filled with different spices,” he said. In between concerts, he would cook, and his colleagues always came knocking.

“All the musicians who traveled with me would hang on until the time the food was cooked in my residence, and then come on over. So that’s how I started using the art of cooking,” he said, smiling at the memory. He’s got a lot of those, like the time he met George Harrison. And Paul McCartney, of whom he still gets friendly phone calls from when he’s in town. Or when the “godfather of Indian music” Ravi Shankar, asked Venkatarman to carry on his legacy as the creative director of his music circle.

Opening up his restaurant was a way for Venkataraman to continue his love for cooking but also to promote a healthy lifestyle. As the only cafe inside the Woodruff Medical Center, these days Venkataraman still sees visiting patients, sometimes those sent down by his wife who still has a practice there. Except now, instead of asking their medical history, he asks if they’ll take salt with their paneer tikka masala, as many of his customers are hypertensive, or diabetic, like himself.

From his choice of ingredients (low glycemic basmati rice, for example), to preparation (less oils, sodium, saturated fats), every meal is designed to keep the body balanced, and the tastebuds singing.

“That’s where my spices come in,” he said. 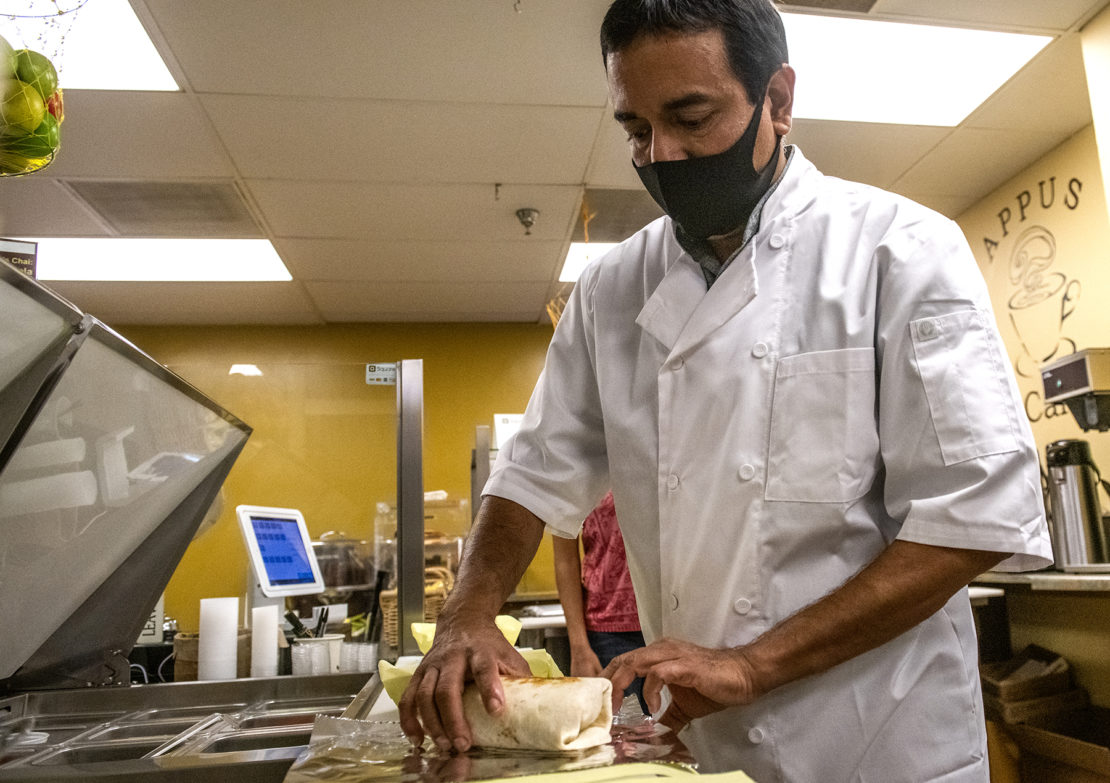 And it’s this unique approach to cooking that’s landed Appu’s Cafe on YELP’s top 100 restaurants in the nation two years in a row (2018, 2019). Vegan and vegetarian diners from across Southern California visit each year, looking to try the fusion of Indian-Mexican dishes that have awarded the quaint cafe a near-pristine five-star rating. The vegetarian Maharajah burrito, a must-try, has garnered a sort of cult following. It’s sister, vegan version, the Maharani burrito, is equally as tempting.

As for the newest additions to the menu, the potato, jackfruit and paneer tikka masala tacos, thank Nelly Lerma, Venkataraman’s head-chef and former long-time nanny for her expert input. Together, Venkataraman said, the two fused each of their cooking backgrounds and shared experiences to make a unique menu.

“Nelly has such beautiful hands when it comes to cooking as an artist, that it’s just phenomenal,” Venkatarman said of his head chef, whom he also pointed to as a reason for opening his restaurant. Nelly is practically family, he wanted to find a way to keep her employed and close by after his two daughters had grown.

“I have known Nelly for 25 years. She took care of my children. She took them to school brought them back home. But most importantly, she learned the art of how to cook Indian meals.”

But perhaps the true success of Appu’s Cafe lies within its founder who, like his spice racks, is stocked full with entertaining stories and good conversation. Though these days he chats with his returning customers from the hallway outside of his cafe, a safety precaution given the times, many come for lunch and stay a few extra minutes for the latest updates on his eldest daughter, an accomplished violinist and pediatric neurosurgeon. Or, where they might ask to tune-in to watch his own performance with the Ravi Shankar Music Circle.

Next time you visit, though, make sure to ask him about that time in ’93 when George Harrison stole a Grammy from classical slide guitarist player, Vishwa Mohan. You’re in for a good one.