From abstract lint paintings and life-sized installations to bite-sized works mimicking plates of upscale sushi in her series Chef’s Special, artist Slater Barron found joy in using a material most would consider worthy only of discarding: lint.

Known as the “Lint Lady,” the Long Beach artist passed away at her home on May 30, she was 89.

Barron began using lint as an art medium in 1975 when doing laundry for her four teenagers had started interrupting her painting time.

“They say, if you’ve got lemons, make lemonade, and the dryer was buzzing at me constantly when my teenagers were changing their clothes so often, so I started to make it work for me instead of against me,” Barron told Huell Howser in 2008. 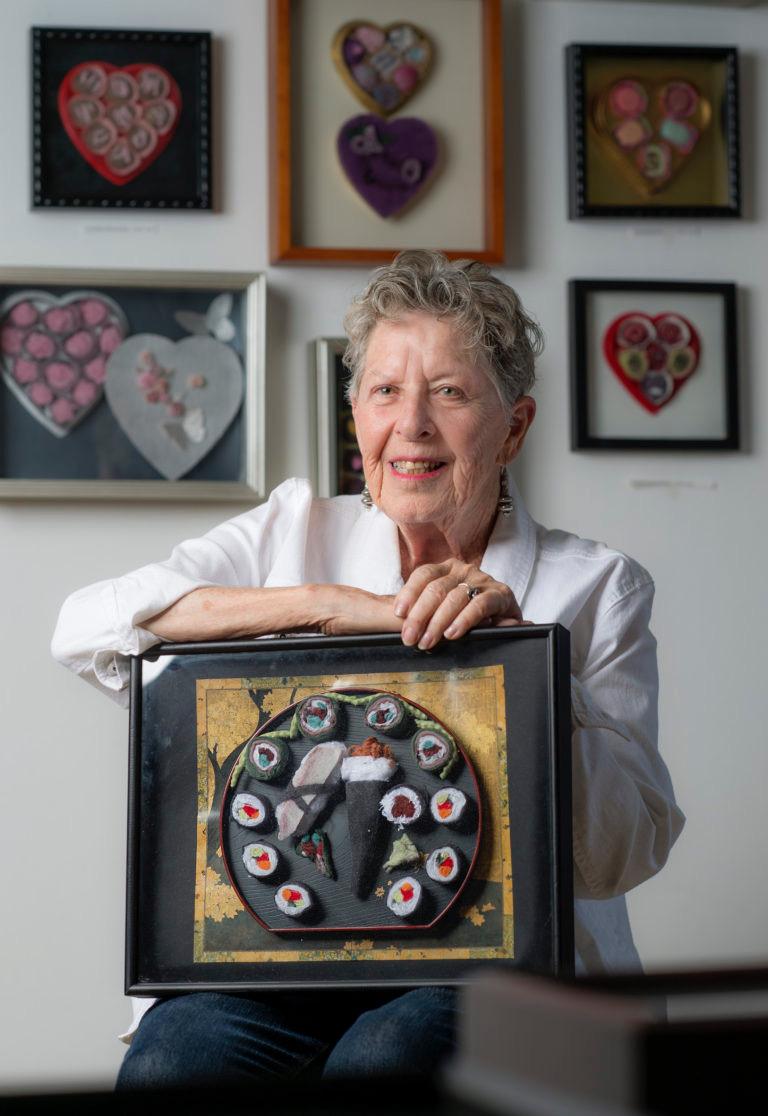 Barron became so identified with lint that friends began bringing her the lint collected from their own dryers. Her works garnered national attention, with some of her pieces now in renowned museum collections, including the Smithsonian White House Collection, Los Angeles County Museum of Art, Long Beach Museum of Art and almost all Ripley’s Believe It or Not! museums.

The unusual nature of her medium led to appearances on television shows including The Tonight Show Starring Johnny Carson, Real People with David Ruprecht and the PBS series Visiting with Huell Howser. Howser said he would never be able to look at lint the same way again.

“Slater will be sorely missed by us all, and many of us will never do the laundry again without remembering her and the lint we saved for her over the years,” said friend and artist Terry Braunstein.

Though the material she utilized brought a smile to many, the artwork she created from it wasn’t necessarily lighthearted.

“She was using a material women are traditionally more familiar with to make monumental art about a serious issue,” said friend and artist, Moira Hahn. “Guernica, composed from a housewife’s artillery of materials! Her art might appear ‘fluffy‘, but that was only at first glance.”

When Barron discovered her mother had Alzheimer’s, and her father had dementia, which later turned into Alzheimer’s, Barron channeled her devastation into creating large lint portraits chronicling her mother’s experience with the disease, as well as a life-sized lint installation of a living room. The portraits were once displayed on the walls of USC’s Institute for Genetic Medicine Art Gallery. 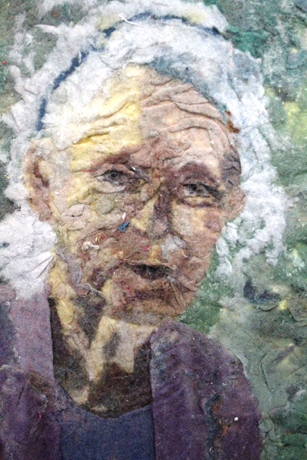 Her parents, Williamina Fullerton and Louis Slatnick, who met while Fullerton was a dancer in NYC, were in love for decades until their deaths.

“It broke her heart to watch them deteriorate,” said Hahn. “She wished she could stop the Alzheimer’s disease that took them from her, years before their lives ended. She made life-sized installations of living room furniture, with human figures, braided rugs, pets, televisions, flower arrangements and framed, fading family photos, from dryer lint, that reflected what life might resemble to a mind afflicted by Alzheimer’s.”

In a 2014 interview with the Long Beach Post, Barron said she was “most proud of the series of portraits I made in dryer lint that depict my mother as Alzheimer’s disease took her away before she died.”

In the book “Remembering the Forgetting,”  Barron wrote how art helped her cope with her parents’ disease in hopes of helping others caring for loved ones with Alzheimer’s. Barron and her sister eventually became participants in the Brain Research Study at USC’s Alzheimer’s Disease Research Center. 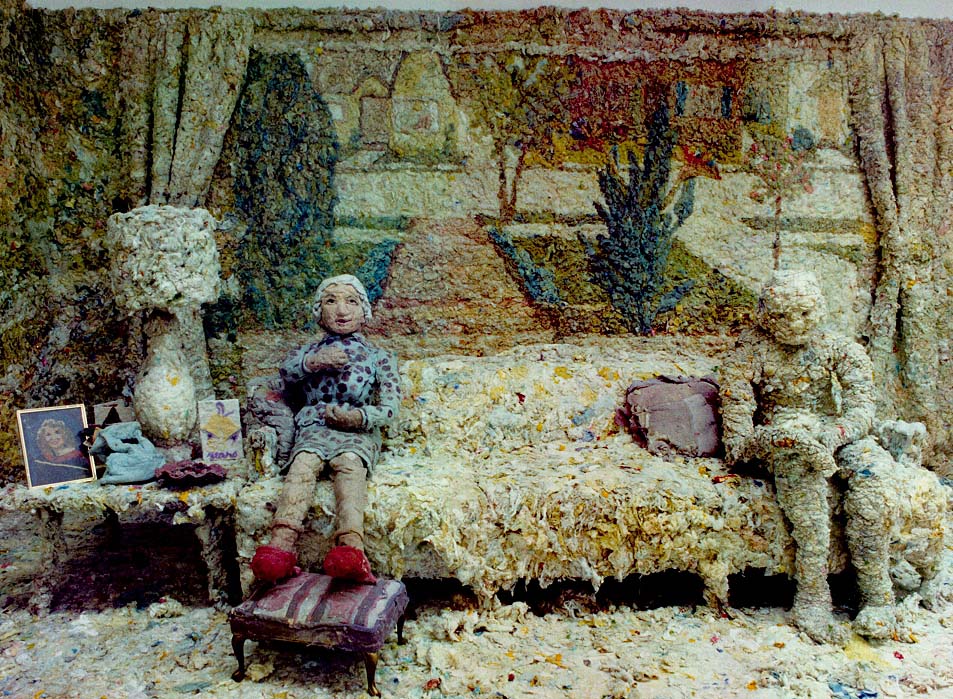 Barron chose to have her brain donated to the program.

Born in New Jersey, by 20, Barron earned a bachelor’s degree in Sociology and Psychology from Susquehanna University in Pennsylvania, going on to work as a children’s social worker.

She served as a line officer in the Navy during the Korean War, assisting military personnel and their families with overseas transitions, later marrying a Marine officer. They had four children and lived around the world, with Barron discovering art history and painting while they were stationed in France.

Courtesy Terry Braunstein, who said Barron is included, along with one of her Navy buddies, in one of the panels of the Navy Memorial near the Aquarium of the Pacific.

Moving to California as a single mother, Barron attended UC Irvine as a studio art major, earning her Bachelor of Arts Degree, then her Master of Fine Arts at Cal State Long Beach, and taught art at institutions throughout the region, including Brooks College, FIDM and UC Irvine Extension.

Barron also served on the advisory board and organized art exhibitions for the Long Beach Senior Arts Colony, and was recognized in 1987 by the Long Beach Public Corporation of the Arts as Distinguished Visual Artist of the Year; Barron also represented Long Beach in the first California State Senate Contemporary Art Collection Exhibition in 1997.

“Though Slater is best known as the Lint Lady—and the LBMA has several of her amazing lint works in the permanent collection—she is not contained by that label, and her creative energy forged many artistic paths, always with caring, with sharing, with friendship,” said friend, artist and curator emerita at the LBMA, Sue Ann Robinson. 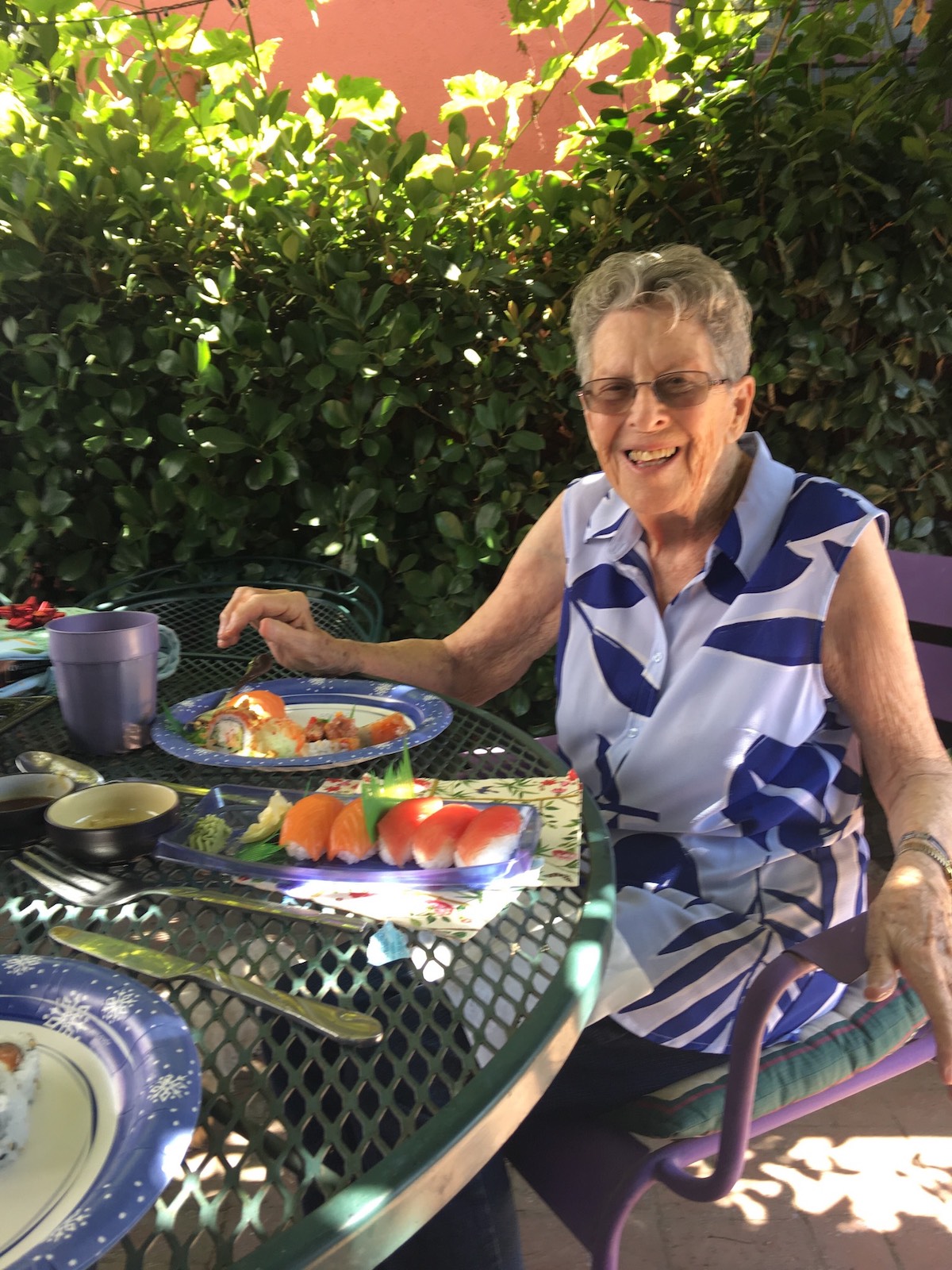 Hahn said she was in her early 20s when she met Barron in Los Angeles at an exhibition and performance called “Shoe Fly Pie” where Barron tap danced in a satin top-hat and tails, while her daughter, Jennifer, operated a portable record player.

“She was like a tiny Fred Astaire, dazzling the crowd,” Hahn said. “Slater must have been in her early 50s, at the time. It was a revelation to me that a woman artist could be so outre. It changed the way I thought about myself as an artist, and about what women could do.”

Decades later, Hahn joined Barron’s network of friends and artists in Long Beach. For 10 years, the artist opened her home and studio to the public during the Long Beach Mid-City Studio Tour. Founders of the tour, Cynthia Evans, Annie Stromquist and Robinson, appreciated Barron’s generosity and ability to bring people together. Stromquist described her as a “driving force” of the tour, saying “July will be coming around soon and it will be a time to feel that hole left by Slater’s death.”

Barron also held annual gatherings in her garden, described as “modern-day salons in which she presided over a joyful space, where a diverse, multi-generational group of arts figures and personalities gathered to celebrate,” said Utopia restaurant owner, Kamran Assadi, where some of her works are displayed.

“That there is a sense of community in the arts in Long Beach is due in part to Slater Barron,” Robinson said.

“A few weeks ago, Sue Ann Robinson arranged a Zoom gathering for Slater, including Terry Braunstein, Cynthia Evans and myself,” Stromquist said. “By then, Slater knew she would die soon. Nevertheless, she wanted to hear about what we were doing, the art we were making. She also made sure to tell each of us why we were special to her and why she loved our art.”

Donations in her memory can be made to the USC Alzheimer’s Disease Research Center or the Long Beach Museum of Art. Learn more about Slater Barron at slaterbarron.com.