For a guy who is in the business of packing bodies into a dimly lit room with said room commanded by a pack of sweaty musicians disrupting airwaves, venturing into the realm of live streaming concerts was probably the last thing Alex Hernandez, owner of Alex’s bar, ever thought he’d be doing. But desperate times call for blah blah blah.

This Friday will be the launch of a new web-series produced by Hernandez and his partner, Paige Hernandez, intended to shed light on the quiet devastation the pandemic has wrought on the live music industry in the last six months. The series will feature pre-recorded live concerts interspersed with interviews from musicians and the myriad people who make live shows happen—sound engineers, venue owners, stage technicians, booking agents, the whole spectrum of industry folk who often go unseen.

“It’s just trying to bring awareness to the overall situation with everybody that works within the live gig entertainment industry. I don’t think many people realize that a large bulk of this industry lives in Long Beach” Hernandez said. “All these folks that work within this industry are struggling and out of work and are just trying to figure it out.”

Friday’s debut includes entertainment from electronica’s comical trio, Fartbarf and San Pedro’s Mike Watt & The Secondmen. Viewers can expect talks from both bands but as far as what other interviews will fill-up the rest of the four-hour show is still being nailed down. 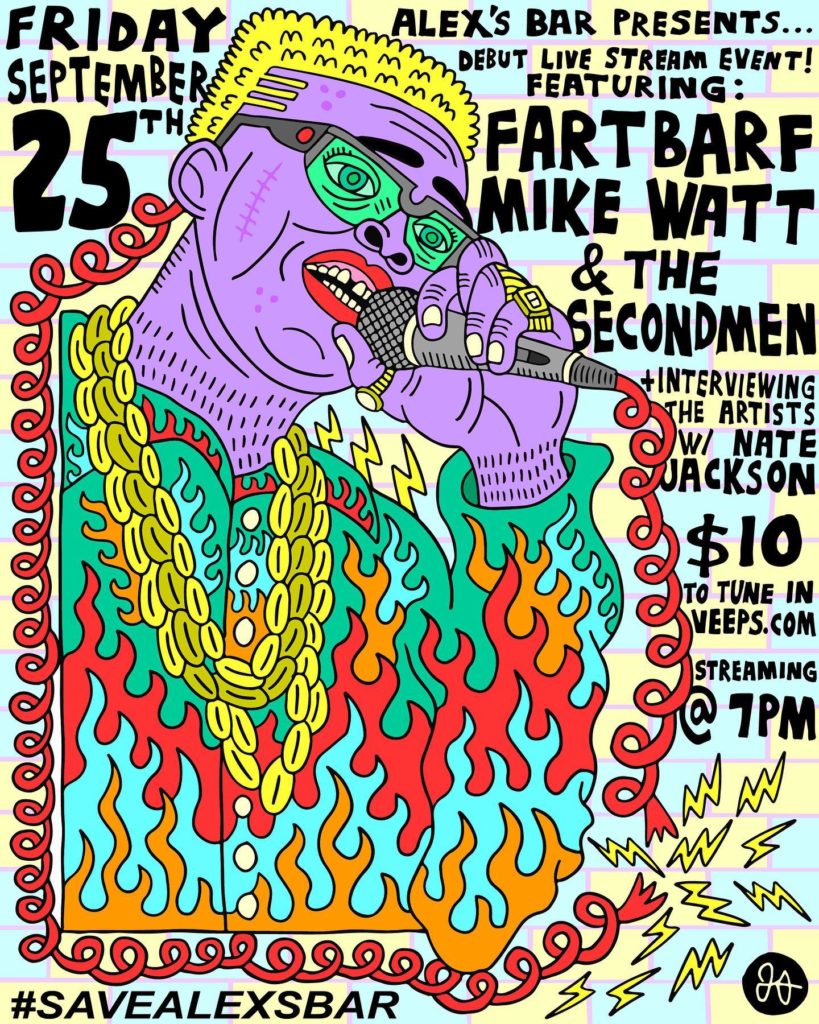 It’s not for lack of content, to be sure. Nearly 20 interviews were recorded at the bar last week—some eight hours of content, Hernandez said.

“We’re just trying to figure out how we’re going to break them up,” he explained. “We’re in full scramble mode, this live stream stuff, none of us have a background in this. We’re just trying to see what [other] folks are doing and come up with our own deal. It’s either going to be really awesome, or really bad.”

Highly unlikely, the latter outcome, with the guests and team behind the project. Interviews led by Nate Jackson, journalist and local musician (Devil Season), include Adrian Young, No Doubt’s drummer, Adrian Maldonado from the Sweet and Tender Hooligans and session drummer Josh Freese (A Perfect Circle, The Vandals). Que Sera’s camera-shy owner, Ilse Benz, stepped out of her comfort zone to talk about her dismal, for lack of a better word, situation. As did 4th Street Vine’s Jim Ritson.

Sound engineer Bill Black, a ubiquitous part of the live-music landscape who’s “[…]done pretty much every tour you could think of, for every type of band” shared his perspective on the state of the industry. Jackson said that Black was so “brilliant he should have his own podcast.”

There’s also DJ Dennis Owens, the turntable mastermind behind the city’s longest-running funk and soul night, The Good Foot. On Saturday, in honor of their 22nd anniversary and the bar that’s kept their DJ night alive, the entire Good Foot crew—Owens, DJ Lili Bird and DJ Scott Weaver—will play a four-hour stream intermixed with some interviews from Owen’s and others. 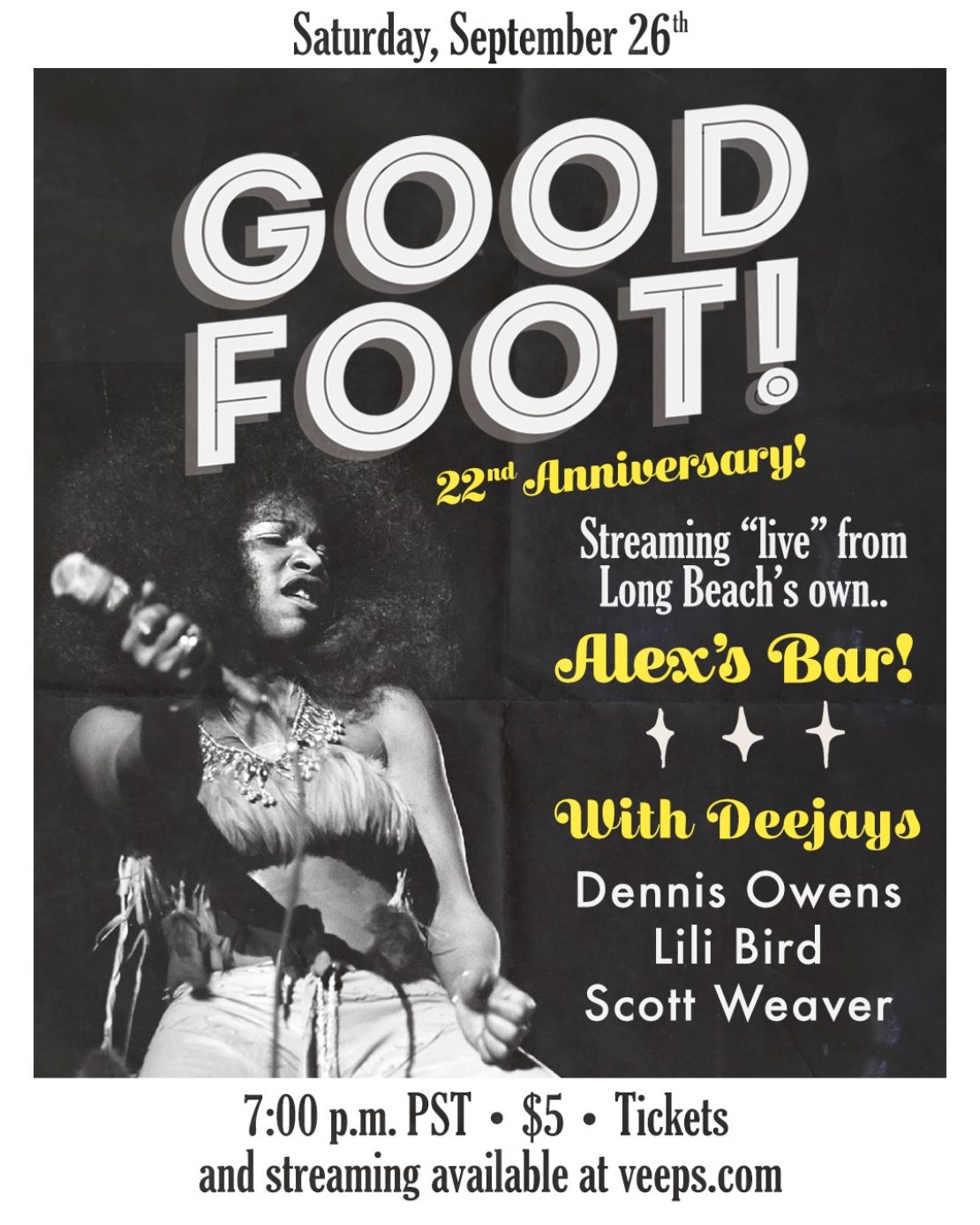 Unlike the empty-roomed sets from Fartbarf and Mike Watt airing Friday, The Good Foot crew entertained a few swaying bodies—couples from the same household that were sectioned off, along with some roller skaters.

“It’s weird to describe but [when you see it] you’re like oh, this is great. They were able to really make something out of this crappy situation that feels kind of familiar,” Jackson said.

Despite having an extensive roster of people to call on in the 20 years he’s been operating his venue, Hernandez is keeping the stream localized, inviting local musicians and industry types to appear on the show. It’s scene pride, sure, but what’s going on at a local level reflects everything that’s happening to the greater live-entertainment industry.

“Alex’s is a barometer for everything else everyone is kind of having to deal with,” Jackson said. “He [Alex] is very much keeping an eye on what’s going on and trying to benefit the ecosystem in which he exists.”

In the months that live music has disappeared, it seems that local, state and federal government have forgotten the “billions of dollars this industry pumps into the economy,” Hernandez said. Live music attracts people from all sectors of life and directly benefits surrounding businesses, like restaurants, retailers, and art spaces.

“What we do spreads out into the community,” he said. “We don’t serve food, so people will pop into Joe Josts’s and eat dinner and have a beer or go into Los Compadres, Long Beach Thai, Famous Burgers across the way. All those restaurants get a bump from our shows.”

Not to mention the intrinsic value a strong music and arts community adds to the city.

“Music and the arts is part of what gives this city prestige. Much like a lot of other major cities, a lot of reason people move to this place is because people are attracted to the flavor of [the] Long Beach [music scene],” Dennis Owens said. Without spaces like Alex’s, “we’d be losing a big part of what makes this place special.”

With the plan to put on the live-stream events on at least once a month, Hernandez is hoping to do it more often, but it’s been, understandably, a struggle finding bands that are willing to play live concerts even in his empty venue, “people have a different level of caution,” Hernandez said.

“We’re definitely trying to do more stuff but it’s a negotiation and we’re trying to reassure people that we’re doing a COVID safe production,” he added.