Live music will still have a haven at Fourth Street's Vine, sounds to come soon • the Hi-lo
- ADVERTISEMENT -

Though 2021 was destined to be busy for Dustin and Emily Lovelis with the imminent arrival of their now 3-month-old son, Dylan, life has now become uniquely more hectic for the first-time business owners with the opening of their beer and wine bar, Vine.

The bar, which opened Saturday, April 10, is more of a reopening than a grand opening as Vine, formerly known as 4th Street Vine, was bought by the Lovelis’ early this year.

For longtime regulars and local music, the looming question was how new ownership would move forward with their plans for the space, which for its 12 years on Retro Row, became one of the city’s most beloved and community-backed music venues.

“Jim [Ritson] and Sophia [Sandoval] built what they built, and it worked for a reason,” Dustin Lovelis said by phone. “I think the community aspect is super important, having it be pretty influenced by local and touring musicians. I still want it to be a local hub for local music and art.”

The couple are still waiting on the green light from the city for their entertainment license, but they’re optimistic things will pan out soon.  But it wouldn’t make much sense to rush into live shows just yet, Dustin said, since countywide coronavirus restrictions only allow bars that don’t serve food, like Vine, to host guests outdoors.

“We can’t have music outdoors. So, it would essentially be an artist playing to a room of nobody,” he explained, since guests are currently only being served outside on their extended patio.

That said, Lovelis said he has some new ideas for his venue once he’s allowed to host live music. A quarterly zine, curated and produced by Lovelis, is the first of the more concrete ideas. The zine would highlight local and touring musicians, local artists, poets, activists, or “anyone who wants to submit, really,” he said.

“I remember going to 4th Street Vine and sitting on the patio flipping through LA Record, reading about friends and local musicians,” he added. “That was a pastime I really enjoyed, so it’d be cool to curate something similar that’s kind of centered around the space.” 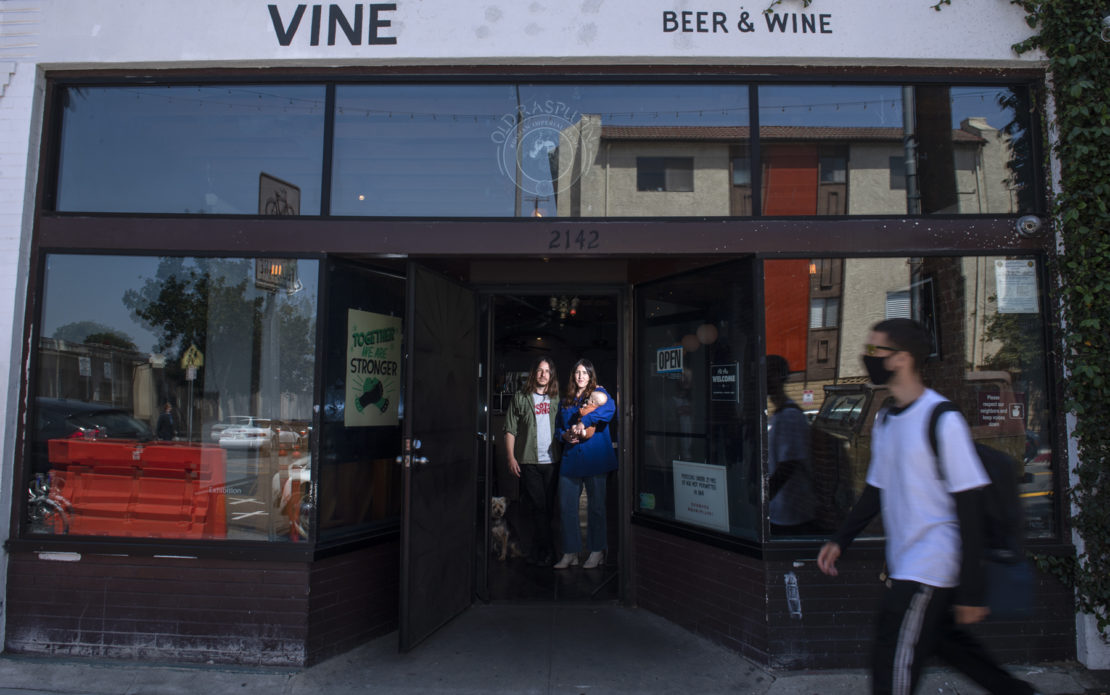 Dustin Lovelis, his wife Emily and their 3-month-old son Dylan along with the family dog Eugene in the doorway of their newly bought establishment Vine, in Long Beach Friday, April 16, 2021. Photo by Thomas R. Cordova.

A major factor in Vine’s charm and success was the range of bands and artists that would perform. Five nights a week the shows were live, and featured acts from goth and punk rock to concert pianists, with weekend DJ residencies just as varied.

Lovelis said, as of now, that format will likely stay the same, but plans on bringing in “other music” too but hasn’t nailed down exactly what that would be just yet. Themed nights and pop-ups he’s also open to hosting, so long as they’re still art- or music-centric, he said.

Lovelis, a Long Beach native, is a respected member of the Long Beach music landscape as a both a musician and supporter of the scene, which makes him well situated to carry the mantle of what Jim Ritson cultivated over the years.

He and his brother Graham’s indie folk-rock band The Fling hailed from Long Beach, with career high points reaching a contract with Dangerbird Records, national and international tours and a feature of their song “Out of My Head” in the end credits of a fourth season episode of the Netflix comedy-drama “Orange Is the New Black.”

After disbanding in 2014, Lovelis devoted his energy to his solo self-titled project, a sometimes psychedelic, sometimes grunge, but equal parts pop playground of whatever inspires him to keep playing. His music has reached stages all over Long Beach and Los Angeles, and many might remember Lovelis’ set at the inaugural Music Tastes Good Festival in 2016.

For local and touring acts looking to be booked at Vine, Lovelis said he’s got a good feel for how to navigate booking and talent relations, and his connections within the local scene are extensive, though he admits, perhaps a little outdated.

“I’m a little older than probably a lot of the up-and-coming bands,” the 38-year-old said. “I know there’s a whole other scene out there that’s younger and I can’t wait to tap into that, to help curate it, be part of it.”

Lovelis added that he’ll still have some help from Vine’s former owner, Ritson and Paul Gonzalez, a local musician and bartender at Vine who helped curate alongside Ritson. 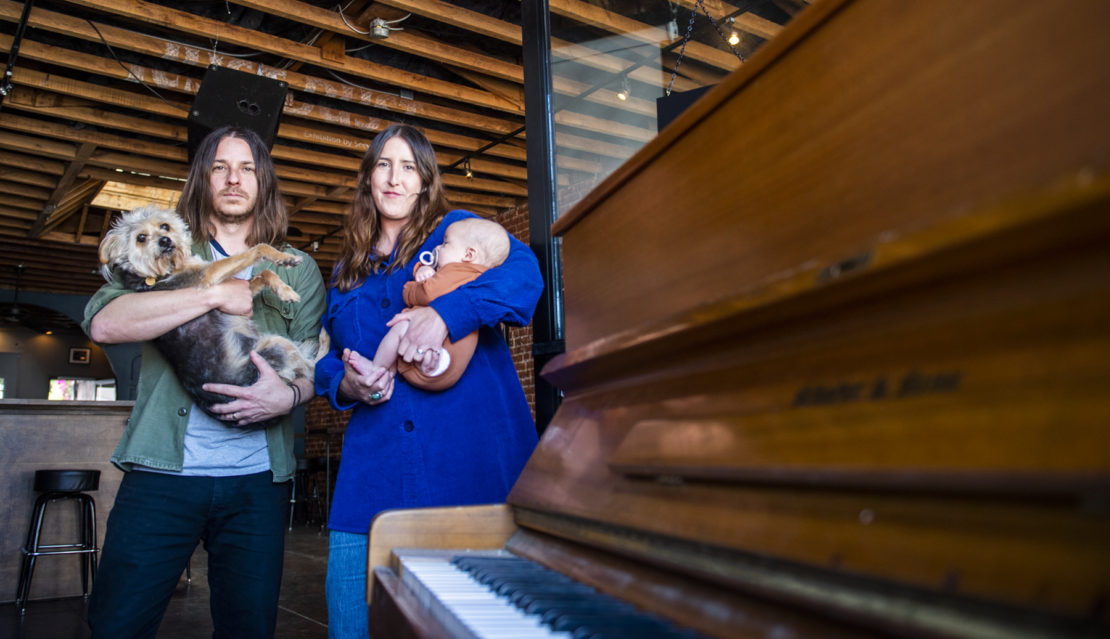 Dustin Lovelis, his wife Emily and their 3-month-old son Dylan along with the family dog Eugene next to an old piano that came with the building at their newly bought establishment, Vine, in Long Beach Friday, April 16, 2021. Photo by Thomas R. Cordova.

While live music is on the horizon, the couple are focusing their efforts on sprucing up the space and getting into the rhythm of bar operations, Emily being a particular asset Dustin said with her retail experience as a district manager for a “pretty big” retail company.

“She has a completely different skill set than I do and we kind of fill in the blanks for each other,” Dustin said. “There’s even stuff on the business side of things, where I’m like, if I didn’t have her, there’d be papers all over my desk, I wouldn’t be able to find anything.”

The selection of beer and wine offerings are also reflective of the couple’s respective skills sets. Emily guides the wine selection which features a generous range of red and white varietals that are more natural, ethical wines without additives, extra sugar or food coloring.

The couple also intend to offer savory snacks and other finger foods to pair with the beverages, but all in good time, Dustin said, “we’re still working out those little kinks.”