MADE by Millworks moves to former Starbucks next door, with plans to fully reopen in 2022 under new name • the Hi-lo
- ADVERTISEMENT -

After pivoting to an online store model in 2020, MADE by Millworks, a gift boutique and gallery space on Historic Pine Avenue, will once again have a permanent brick-and-mortar to call home.

They’re not moving far. Next door, actually, to what used to be the Starbucks on 242 Pine Ave. And technically the store is open now, but as a holiday pop-up through Dec. 24. Afterwards they’ll undergo renovations and reopen in early 2022 under a new name, which hasn’t been settled on yet.

“We’re still kind of finalizing all the details,” General Manager Andrew H. Carroll said. “But it’s going to be figuratively and literally connected to MADE and Elinor.”

All this means is that this new MADE will operate as it always has. It’s still selling all the handcrafted goods made by local and regional DIY artisans. Its in-store, rotating gallery concept stays, too. And even the women-owned beer and wine drinkery, Elinor, which is operated by MADE, will reopen, too. Part of the forthcoming build-out will include a corridor connecting the new storefront to the drinkery, which will still be stocking only beer, wine, cider, and other drinks made locally or produced by women. And if you’re wondering about live music and open mic nights, yes, that’ll still be there, too.

All that’s changed is the location. The former Starbucks MADE is leasing is about a quarter of the space the original MADE storefront had on 240 Pine Ave.

Well stocked and set-up for its holiday pop-up, MADE shoppers can find all the familiar merchandise patrons had appreciated before: handmade jewelry and candles, well-crafted bath and body products, clothing, accessories, greeting cards, prints, apothecary items.

MADE by Millworks which is open for the holidays in Long Beach Thursday, Dec. 9, 2021.Photo by Thomas R. Cordova.

Long-time local vendors like POW! WOW! Long Beach, Bike Local, We Love Long Beach and Irwin Bazaar, among many others, are still partnered with the shop, in addition to new vendors, such as jewelry maker Muxer (pronounced “moo-her”). Currently MADE boasts contracts with over 100 local vendors and artists.

To the immediate left of the building’s entrance is a modest gallery wall on which hangs its current exhibition “Salon du MADE.”

“It’s a mix of old and new work from artists we have worked with over the years,” Carroll explained. 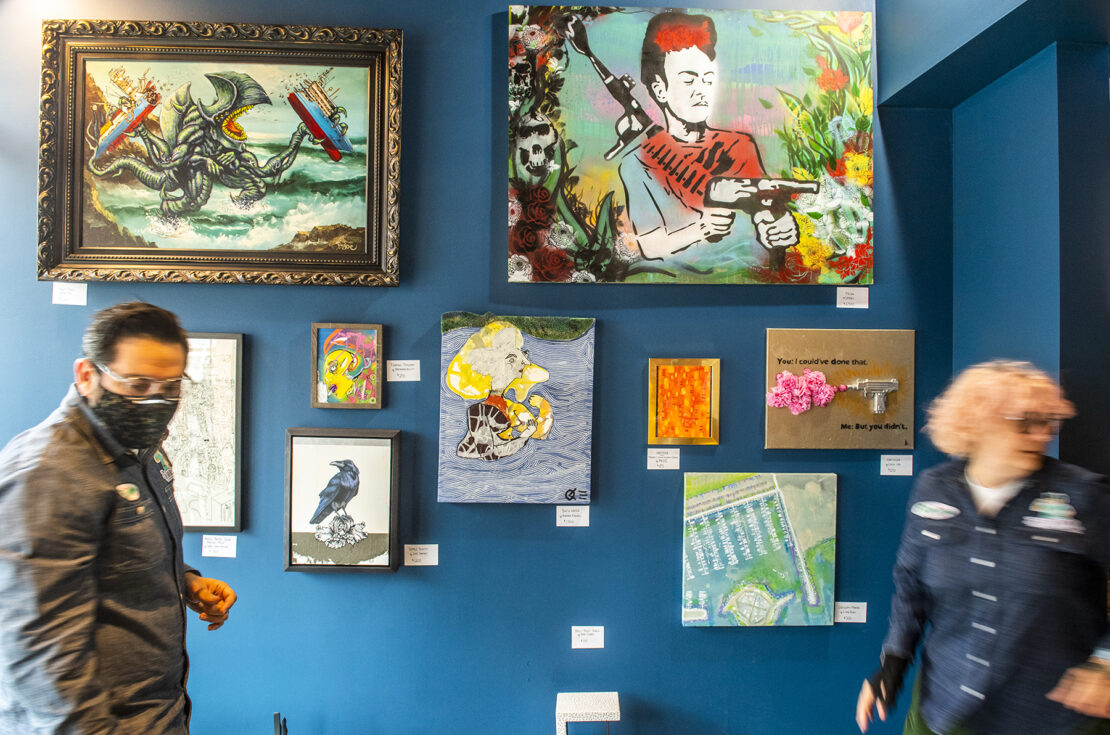 Andrew H. Carroll and Leslie Lay walk by the art gallery after adjusting the frames on the wall while at the pop-up of MADE which is open for the holidays in Long Beach Thursday, Dec. 9, 2021.Photo by Thomas R. Cordova.

But all this talk of what’s changing and mostly not changing begets the questions of why we’re talking about all this in the first place.

When MADE by Millworks closed, like most businesses, at the beginning of the pandemic in March 2020, it pivoted to an online store until Sept. 2020 when it opened a three-month-long pop-up at its brick-and-mortar for the holidays. Amid a second major surge of coronavirus infections that same December, MADE felt it best to pivot back to an online store for 2021.

“In January 2021, it was admittingly a little scary to be open with the surge and we saw partnering with Antioch [church] as the best way to serve our community because they were doing some good and we wouldn’t be a place where COVID could spread,” Carroll said.

At present, Antioch Church is subletting the original MADE by Millworks storefront as its new hub and location center for its Joy in the City Giveaway program. Antioch launched the program at its church around the holidays in 2020 in response to the hardships Long Beach families were experiencing during the pandemic.

Over two thousand people were given $150,000 worth of furniture, kitchenware, toys, baby items, hygiene products, household items and other necessities during the three-hour giveaway on Dec. 20, which saw lines wrapped around blocks from its church on 350 Pine Ave. Antioch sought to continue the program year-round, but the problem was the church is undergoing major renovations.

In 2018, MADE’s CEO Michelle Molina sold Antioch the building on 350 Pine Ave., which had once been a premiere music venue known as the Vault 350. Now the church is working to make transform the space into both a place of worship and a venue with plans to host plays, weddings, business events and more. It was a match “made in heaven,” Molina told the Post in 2018.

With Antioch’s church only a block away from MADE’s original storefront of 240 Pine, the partnership with MADE seemed ideal.

The yet-unnamed new MADE is slated to reopen after renovations in early 2022, according to Carroll. Its holiday pop-up will be open Friday-Sunday until Dec. 24 with varying hours. Click here for more information.

MADE by Millworks is at 242 Pine Ave.